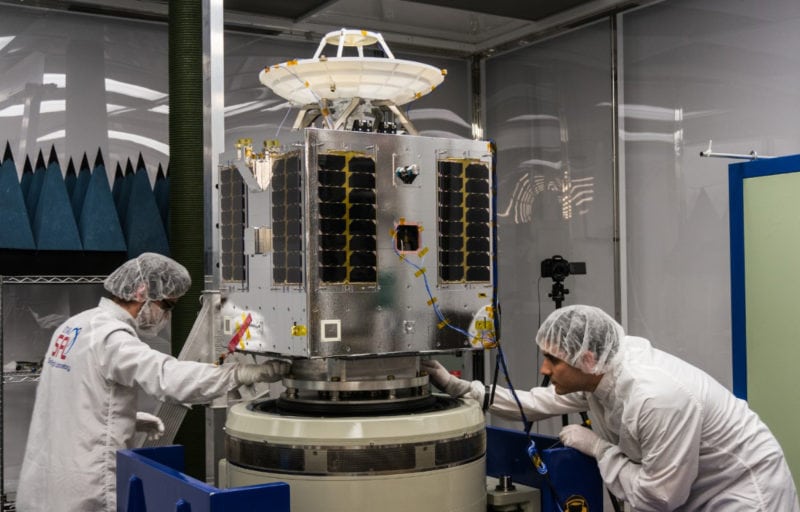 Bigger is better. This statement is certainly true in Texas, but it applies elsewhere. In the automotive industry, cars seem to keep growing in size (even Mini got aboard the big car revolution). TV screens keep stretching out so much that soon we’ll have to rethink housing design. Oversized watches, women’s handbags, the Las Vegas-style buffet and even chickens (yes, they’re apparently bigger, too). What doesn’t seem to fit with the supersizing trend, though, is the satellite industry. Small satellites and the rising Low Earth Orbit (LEO) constellations have big – and growing – appeal.

Have small satellites “Gripped the satellite industry?” When global market leaders in hefty commercial satellite manufacturing consider downsizing large Geosynchronous Earth Orbit (GEO) operations, absolutely. It’s not about emerging tech nations using cubesats as an entry point to space, or another novel smallsat application that catches the interest of a few. Market leaders are fully embracing small satellites and ramping up expectations as large satellite operations continue to wind down.

This shift away from GEO is in keeping with the industry at large. According to SSL, satellite operators are evaluating new technologies and business plans arising from the change in how people watch TV, as well as the shift from broadcast to data-centric applications such as In-Flight Connectivity (IFC) and consumer broadband. As a result, the GEO communications satellite market can be expected to remain lower than historical levels.

“From our perspective, industry growth is moving in the direction of LEO and Medium Earth Orbit (MEO) constellations, with demand for GEO communications satellites primarily driven by the replacement needs of existing satellites,” Dario Zamarian, Group President, SSL told Via Satellite. “We don’t expect the GEO market to grow, but we do see ongoing demand for High Throughput Satellites, replacement satellites and satellites that provide connectivity in remote regions.”

Within the GEO market, demand for digital communications, more recent satellite applications such as IFC and consumer broadband, and the looming 5G are driving the need for innovation in these satellites’ capabilities. An example of this, Zamarian noted, are the Ultra High Density Satellites which can bring unprecedented capacity to very focused regions. The trend continues toward standardized platforms with digital satellites to provide flexibility, he adds.

“However, we expect strong growth in smaller form factor satellites in the 100 to 500 kilogram ranges. There is demand for smaller satellites for both commercial and government applications, including both satellites for communications and various kinds of Earth observation and remote sensing,” said Zamarian.

While SSL is best known as a prominent manufacturer of GEO commercial telecommunications satellites, it is also well positioned to seize the opportunities presented by smaller satellites, says Zamarian. The company is responsible, past and present, for the manufacture of more than 90 smallsats. These include the first Globalstar communications constellation as well as a constellation of Earth observation satellites for Planet. SSL is providing the next generation WorldView Legion constellation for DigitalGlobe, while four Earth observation satellites built for Planet were launched in 2016, along with six more launched in 2017.

“We are very focused on innovative small satellite solutions. SSL is well positioned to bring New Space agility to small satellite manufacturing,” said Zamarian. “We bring a flexible, commercial mindset and out-of-the-box thinking together with a strong heritage of success in designing and building spacecraft. We have a track record, a reliable supply chain and a highly motivated workforce to back our promises, and we are investing in technology development and a state-of-the art factory of the future that makes us extremely competitive.”