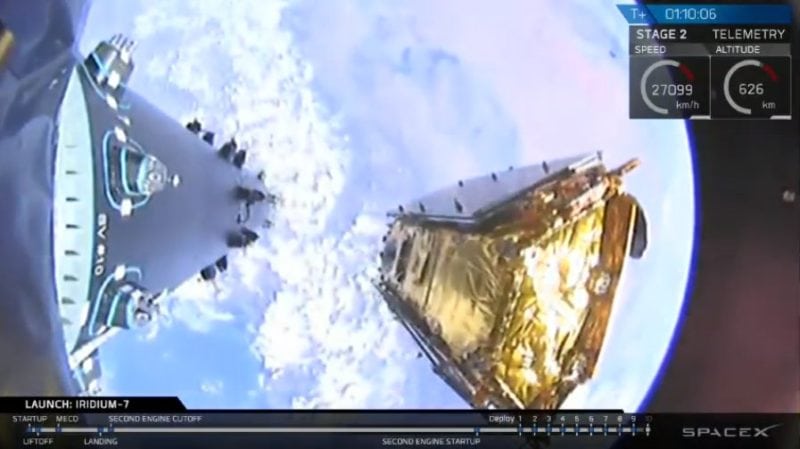 Deployment of an Iridium Next satellite off of a SpaceX Falcon 9 rocket. Photo: SpaceX

Aireon successfully completed launch and deployment of its space-based Automatic Dependent Surveillance-Broadcast (ADS-B) payloads, hosted by the Iridium satellite constellation. Yesterday, a SpaceX Falcon 9 rocket lifted off from Vandenberg Air Force Base in California and placed 10 new Iridium Next satellites into Low Earth Orbit (LEO), bringing the total number of Aireon payloads in orbit to 65. This leaves a single launch of 10 more Iridium Next satellites and their Aireon payloads before the launch campaign concludes later this year.

“The system has been functioning beyond expectation, resulting in even greater coverage redundancy than initially planned,” Aireon Chief Executive Officer (CEO) Don Thoma said. “We’re seeing double coverage, and in many cases triple redundancy from our payloads before the constellation is even completed.  With this seventh successful launch completed, we’re now preparing to begin a new era for the aviation industry.”