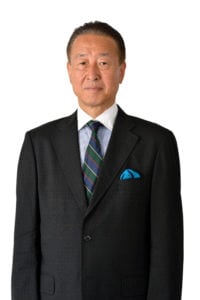 SKY Perfect JSAT is one of the biggest satellite operators around with a strong position in Japan and throughout Asia. But, how will it grow its business going forward?

VIA SATELLITE: There were only around four GEO satellite orders in 2017. Did this surprise you? Does this signify an inflection point in the satellite industry or do you think the demand for GEO satellites will be strong again in the future?

Koyama: It is not surprising, considering the satellite replacement cycle and the consolidation of capacity driven by the shift to HTS. While we expect this shift will continue, we are confident that the GEO satellite business will continue to expand.

GEO satellite systems will keep their competitive advantages over satellite constellation systems as it can create a simple, single satellite network without handover interruption. It is certain that the global demand for connectivity will keep on growing. GEO satellites will continue to play an important role for connecting the unconnected.

VIA SATELLITE: The Internet of Things (IOT) is a hot topic in satellite, but the big question is what role the satellite industry can play in an IOT and Industrial IOT (IIOT) world. How do you view this? What do you see as the new opportunities for satellite players going forward?

Koyama: MSS operators will be playing a major role in satellite-based IOT for small, low-cost terminals. On the other hand, FSS operators like us will have to look at an even greater niche in the market. However, we feel that there will be potential opportunities for growth in applications that require higher bandwidth than MSS. They include backhaul lines that accommodate a great number of sensors, surveillance cameras and connected commercial cars.

VIA SATELLITE: Will operators in Low-Earth Orbit (LEO) and Medium Earth Orbit (MEO) significantly change the industry? Do you think many of them will be successful?

Koyama: We will have to wait a few more years or so to see whether LEO/MEO satellite operators will really succeed, or if this will just be history repeating itself. There are a number of factors for their success. For example, use of low-latency for communications or high-revisit rate for remote sensing. It is uncertain if they will be able to recover their massive capital expenditures through their business. However, JSAT is building global business alliances with a view toward the possibility of supplementing GEO satellite networks with LEO satellites.

VIA SATELLITE: What innovation would you most like to see in the satellite industry? What technology development do you think could make a huge difference to our industry?

Koyama: Artificial Intelligence (AI) technology has been developing new business market by using big data. This trend has been changing the business structure of satellite manufactures and launch service providers, and this wave would continue.

AI might enable autonomous satellite operations. Robotic technology, which could enable the integration, reconfiguration and replacement for the spacecraft/satellite in orbit with commercially reasonable cost, is expected. It would make space more sustainable, more reachable and an economically more attractive business field.

VIA SATELLITE: How do you view the connected car market for satellite? Is this the next big transportation market for the industry?

Koyama: Connected-car technology will bring about a dramatic enhancement in the convenience of satellite communications. In Japan, there is a particularly large need among disaster-risk reduction agencies and news organizations for the utilization of communications via automobiles. We recognize more demand for easy connection for them. We believe that this could become a new trend, following the changes we have seen happen in ships and airplanes.

We are strengthening our focus in this market; we have entered into a strategic partnership including an investment with Kymeta in March last year. Rigging vehicles with antenna equipment, acquisition of licenses, provision of repair and maintenance services, and all the other areas are also considered to be included in our scope. We are eager to cultivate this field by providing not only terminals but also services including communications.

VIA SATELLITE:: Let’s talk briefly about broadcast. Are companies like Netflix and Amazon really changing the business model that a traditional pay-TV operator needs to deploy to be successful? Should the industry be worried about Sky’s recent initiative to move away from satellite dishes?

Koyama: It’s true that various video streaming services appear with presence, not only at Direct to Home (DTH) but also on the internet.  Our multi-channel Pay-TV “SKY PerfecTV!” is a conventional DTH, but recently we are enriching the service by delivering more programs on our internet streaming platform.

VIA SATELLITE:: What do you think are the three main issues facing the satellite industry this year?

Koyama: The three main issues facing GEO satellite operators are: enhancing value propositions to customers; securing elastic demand amid price competition driven by more HTS systems in the market; and adjusting and the utilization of conventional satellites by shifting to HTS.

In regard to the first issue, JSAT will expand the satellite market through the introduction of new technologies such as LEO satellites, drones and flat-panel antennas. Furthermore, we will secure resilience in the local market through an in-orbit back-up satellite. As for the second issue, JSAT will reduce satellite procurement costs through alliances with other companies. We will also attract mobile demand, such as ships and airplanes, as well as mobile backhaul. As for the third issue, we will make a smooth transition from conventional satellites to HTS while minimizing any negative impact to customers. Additionally, we will respond by leveraging existing assets, such as inclined orbit satellites. 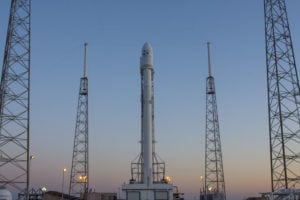 Falcon 9 vertical at the pad in advance of the JCSAT-14 mission for SKY Perfect JSAT Corporation. Photo: SpaceX

VIA SATELLITE:: Outside of your company, which company do you admire most in the satellite sector? What are the reasons?

Koyama: If we had to choose one, it would probably be SpaceX. The Falcon 9 rocket, which carried our JCSAT-14 and JCSAT-16 into orbit the year before last, returned safely, and we are also reaping the benefit of a reduced launching cost. The recent launch and landing of Falcon Heavy is also still fresh in our minds. They have brought dramatic advancements in the field of satellite launching, and their activities are well known even to those outside the satellite industry. As price competition becomes heated in satellite communications, if the reuse of rockets and large-scale missions are going to reduce costs, then there is nothing that would please us more as a satellite operator.

VIA SATELLITE: Finally, what do you think will be your main talking points for the SATELLITE 2019 Conference & Exhibition next year?

Koyama: JSAT is scheduled to launch two HTS in 2018, and we will be commencing the provision of full-scale services in the Asia-Pacific region. We are anticipating mobility, cellular backhaul, etc., as our target. We will know next year or later exactly how big the demand will be and what kind of profits the services will lead to. We will be able to tell you about the future direction of our GEO satellites at that time.

Also, I’m looking forward to share the progress of governmental programs. We aim to expand our business by entering the market of space utilization services and participating in government-led projects in line with the “Basic Plan for Space Policy” in Japan. JSAT is responsible for operating governmental satellites by leveraging its experience in the commercial satellite operations.

Besides GEO, LEO satellite business would be the other main topic. We can talk about our work to be done this year. At the same time, we are also promoting efforts in relation to the LEO satellite business, and we plan to launch a LEO satellite Earth station service in the next fiscal year. Customers are gradually increasing for Planet’s LEO satellite imagery service, and we have also signed a distributor agreement for the resale of Orbital Insight’s analysis of satellite imaging analytical data. Next year, we will further strengthen our work in fields outside of GEO satellites.

The post Sky Perfect JSAT Exec Outlines Next Steps for the Company appeared first on Via Satellite.