The demand for small satellite launches for both new installations and replacement missions is estimated to grow to 11,631 by 2030. This demand will derive primarily from commercial constellation operators and could take the market past the $62 billion mark, according to a recent Frost & Sullivan report titled, “Small Satellite Launch Services Market, Quarterly Update Q1 2018, Forecast to 2030.” The report details the demand and supply for small-satellite launches based on operators’ maturity, mass classes, and user segments. It forecasts the number of smallsats, payload mass, and launch revenue, based on defined scenarios.
The upsurge in demand is the result of small satellites evolving from being simply technology demonstrator platforms to becoming affordable downstream services across the industry. More than 30 commercial operators are building smallsat capabilities and plan on installing large constellations in the Low-Earth Orbit (LEO) to offer low-cost imagery and affordable global connectivity solutions. Currently, only two commercial constellation operators have been able to either completely or partially install their in-orbit constellations. The remaining operators are in the test and development phase and are aiming to install complete satellite constellations over the next three to five years. These smallsats will have an operational lifespan of two to five years. Maintaining fully operational constellations will, therefore, mean that smallsat launches will be recurring and continuous. 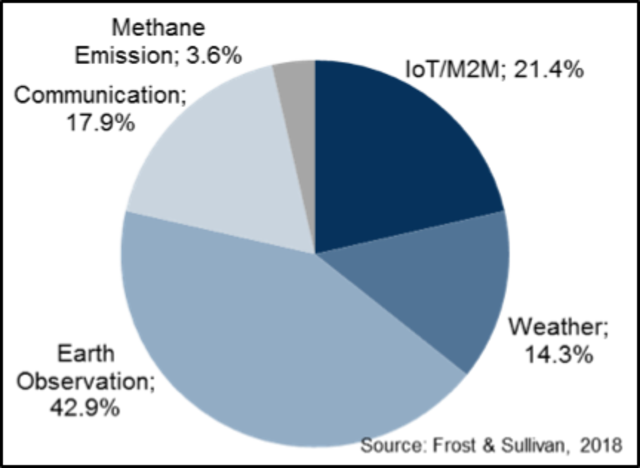 Most small-satellite commercial operators are new entrants from North America and Europe region with about 50 percent from the United States, 10 percent from Canada, and 25 percent from Europe. While just more than 40 percent of the total number of operators plan to offer affordable Earth observation solutions, more than 21 percent are targeting narrowband Internet of Things (IOT) and Machine-to-Machine (M2M) connectivity solutions, in response to the downstream digital transformation of various industries.
Smallsat constellation operators still face major challenges as they strive to meet surging demand. These include limitations in current launch services offerings, slow subsystem and satellite production rates, and inadequate ground station infrastructure. Promisingly, however, the industry is evolving at an accelerated pace, in order to address smallsat requirements across the value chain.
Burgeoning Need for On-demand, Low-cost Launch Services
Existing launch services address only about 52 percent of the total demand. Currently, most satellite operators access space on large launch vehicles and use rideshare capacities to launch their satellites as the secondary payload. However, this makes their mission dependent on the primary payload. Also, the waiting period for the launch varies from six months to two years. There is, therefore, significant unmet need for on-demand launch options for smallsat operators.
Aware of burgeoning demand, multiple launch vehicle developers and new entrants are investing in the development of low-cost vehicles that offer on-demand launches for smallsat operators. More than 40 launch vehicles with a less-than-2-tonne payload capacity are under development and are set to be operationalized in the next two to four years.
Focus on Ramping Up Serial Production of Small Satellites and their Subsystems
Small-satellites are creating significant market opportunity for high volume manufacturing of satellites and their subsystems. According to Frost & Sullivan’s “Small Satellite Value Chain Assessment, 2017,” which analyzed more than 300 companies across the value chain, more than 90 percent of smallsat manufacturers are located in the North America and Europe region.

The central value propositions of constellation operators are real-time imagery and seamless global connectivity, using a large number of satellites in LEO. In order to achieve real-time imagery, the satellites need to be near-continuously connected with globally dispersed ground stations. This is primarily because of two reasons: first, near real-time imagery downloads, and, second, on-board storage and playback limitations. For seamless global connectivity, the satellites need to be continuously connected with ground gateways.
These requirements have resulted in satellite operators, ground station service providers, and service aggregators increasing investments and supporting innovation in the ground segment. On the one hand, incumbent players are expanding their ground station networks across the globe and, on the other hand, new entrants are developing cloud-based aggregator platforms integrating the idle capacities of existing ground stations.
These innovations/disruptions across the value chain will enable the global smallsat launch services market to soar past the forecasted revenue of $62 billion in the period between 2018 and 2030. VS

The post SmallSat Launch Market to Soar Past $62 Billion by 2030 appeared first on Via Satellite.