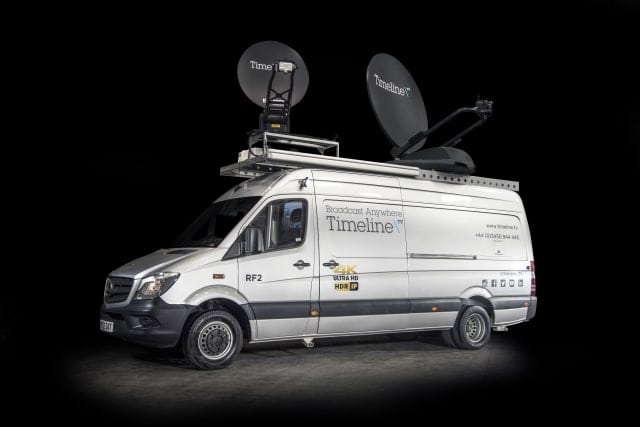 Cobham Satcom’s Explorer 8100 Auto-Acquire, Drive-Away Antenna System, with its Dynamic Pointing Correction technology, has been installed on the U.K.’s broadcast solutions provider Timeline TV’s new 4K-uplink RF2 broadcast truck. The new vehicle, which entered operations recently, is the latest addition to Timeline TV’s fleet and was developed to augment its outside broadcast capabilities and improve efficiency by enabling more focus on IP-based workflows.

RF2’s first major project will be the royal wedding of Prince Harry and Meghan Markle tomorrow at St George’s Chapel, Windsor Castle. Timeline TV’s crews will use the system for operational communication over a high bandwidth, always-on Ka-band VSAT link, supporting the high quality broadcast of what is set to be the U.K.’s most watched event in years. Afterwards, RF2 will be making a trip to the NSC Olimpiyskiy Stadium in Kiev on May 26 for the UEFA Champions League Final.