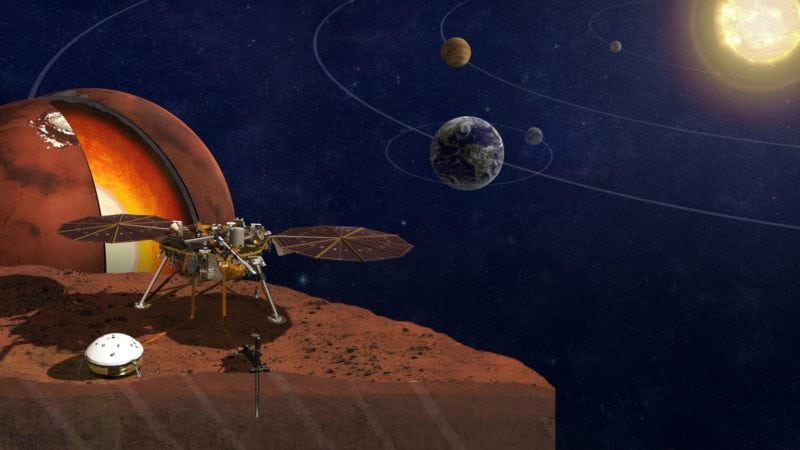 InSight is a robotic lander designed to study the interior of the planet Mars. Photo Credit: NASA

A United Launch Alliance (ULA) Atlas 5 rocket carrying NASA‘s InSight Mars lander lifted off from the Vandenberg Air Force Base Space Launch Complex 3 on Saturday. InSight is the first mission launched to another planet from the West Coast, which requires more energy than an East Coast launch that takes advantage of the Earth’s rotation. The West Coast Mars launch was made possible by the performance of the Atlas 5, an optimized trajectory design to achieve the very exact hyperbolic injection required to deliver the spacecraft to Mars, and Aerojet Rocketdyne propulsion systems.

InSight, designed to gather data on Martian seismology, is relying on Aerojet Rocketdyne propulsion systems during the launch, cruise, entry and landing phases of its journey. Six pairs of Aerojet Rocketdyne MR-107N engines, each generating 50 pounds of pulsed thrust, will bring InSight to the Martian surface. Before touchdown, the engines will have to steer InSight clear of the parachute, when the thrusters will then slow InSight to a speed of about 10 km per hour, enabling a soft touchdown

ULA and its heritage rockets have launched every U.S. spacecraft to the Red Planet since the 1960s, including Mars Science Lab, as well as the Spirit and Opportunity rovers. This was the 10th Mars launch on an Atlas rocket, and the fourth by the Atlas 5 following the Mars Reconnaissance Orbiter in 2005, the Curiosity rover in 2011 and the Maven orbiter in 2013.

In addition to InSight, the mission included two CubeSats, which launched from dispensers mounted on the aft bulkhead carrier on the Atlas 5 Centaur second stage. The Mars Cube One CubeSats, designed and built by the Jet Propulsion Laboratory, are the first to travel interplanetary.

The post NASA Makes History with West Coast Launch of InSight appeared first on Via Satellite.