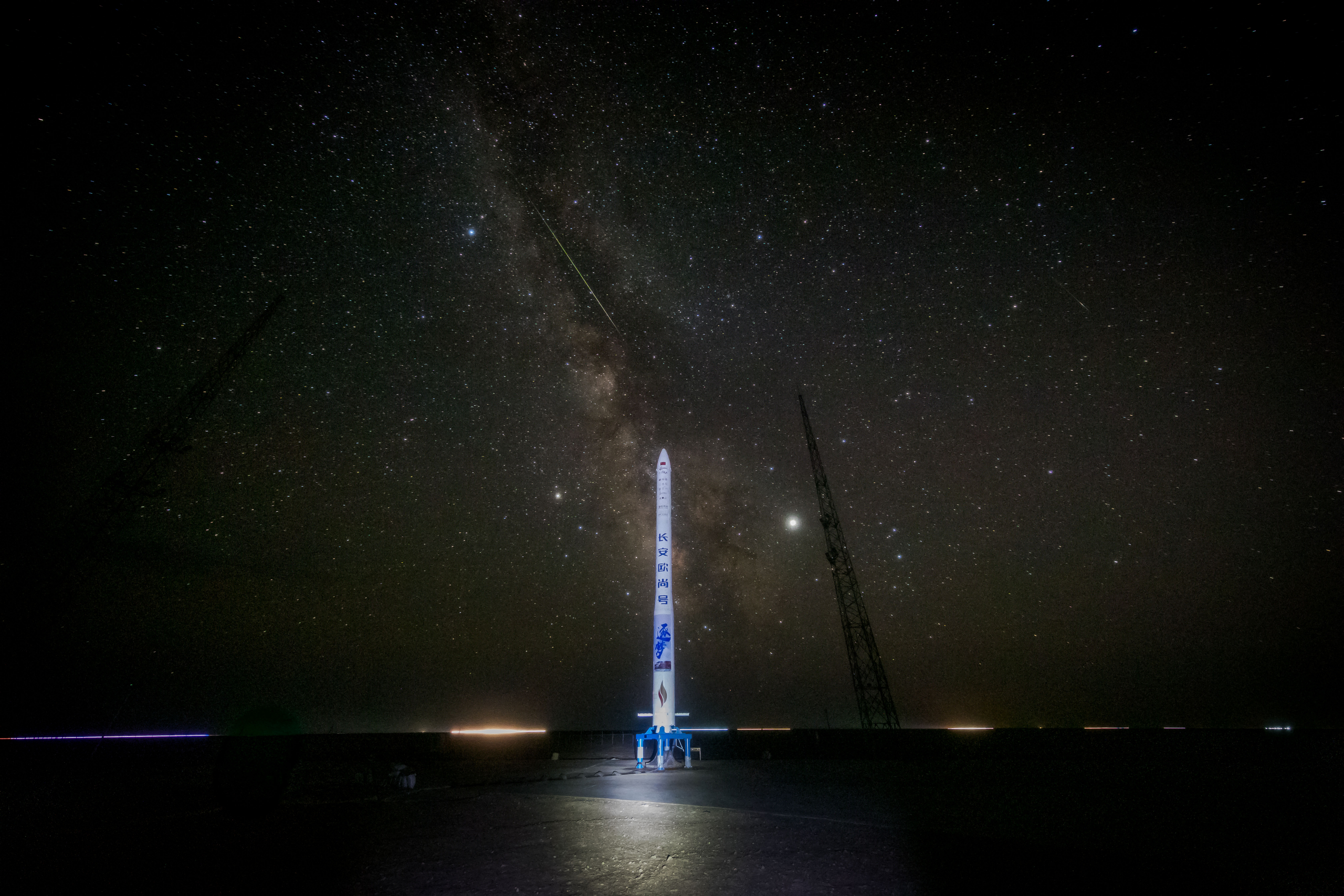 i-Space, a private Chinese launch provider, attempted to return to flight with the Hyperbola-1 (SQX-1) vehicle early Friday morning. The Hyperbola-1 has had a troubling past, failing to deliver its payloads to orbit, now, on three of its four flights.

Onboard the rocket was the Jilin-1 Mofang-01A(R), a replacement satellite for the Jilin Mofang-01A, which launched on the previous flight of the Hyperbola-1 and ultimately failed to reach its intended orbit.

While official reports as of publication do not mention a reason for the failure, it is understood that shortly after stage separation, the second stage failed to ignite.

The Jilin-1 satellites are a series of commercial remote sensing satellites intended to be used for high definition video within the constellation of the same name. The satellites are designed and operated by the Chang Guang Satellite Technology Company. They have a mass of only 18 kg, carry imaging systems, and are powered by a pair of solar panels.

Founded in 1958, the launch center is a part of Dongfeng Space City and includes People’s Liberation Army Air Force test facilities and a space museum.

i-Space was the first private Chinese Company to reach orbit on that flight and developed the Hyperbola-1 using solid propellant rocket engines from the Chinese Aerospace Science and Technology Corporation (CAST). 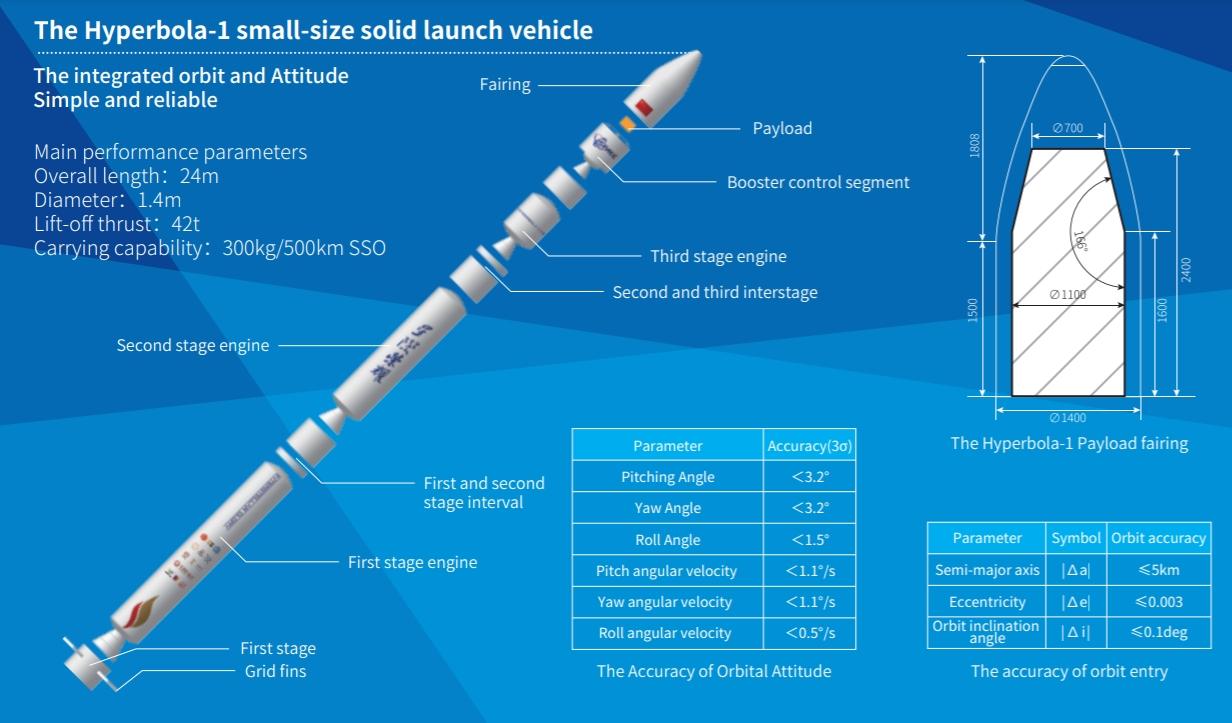 Diagram of the Hyperbola-1.

For Hyperbola-1, the orbital rocket is a four-stage solid propellant launch vehicle that stands 24 meters tall, 1.4 meters in diameter, and has a launch mass of 42,000 kg.

Hyperbola-1 has launched four times including today’s mission, with only the first attempt achieving orbit.

Its first flight in July 2019, launched multiple payloads, including an amateur radio satellite called CAS-7B, developed with help from the Beijing Institute of Technology, and a CCTV verification satellite.

To date, this is the rocket’s only successful mission. 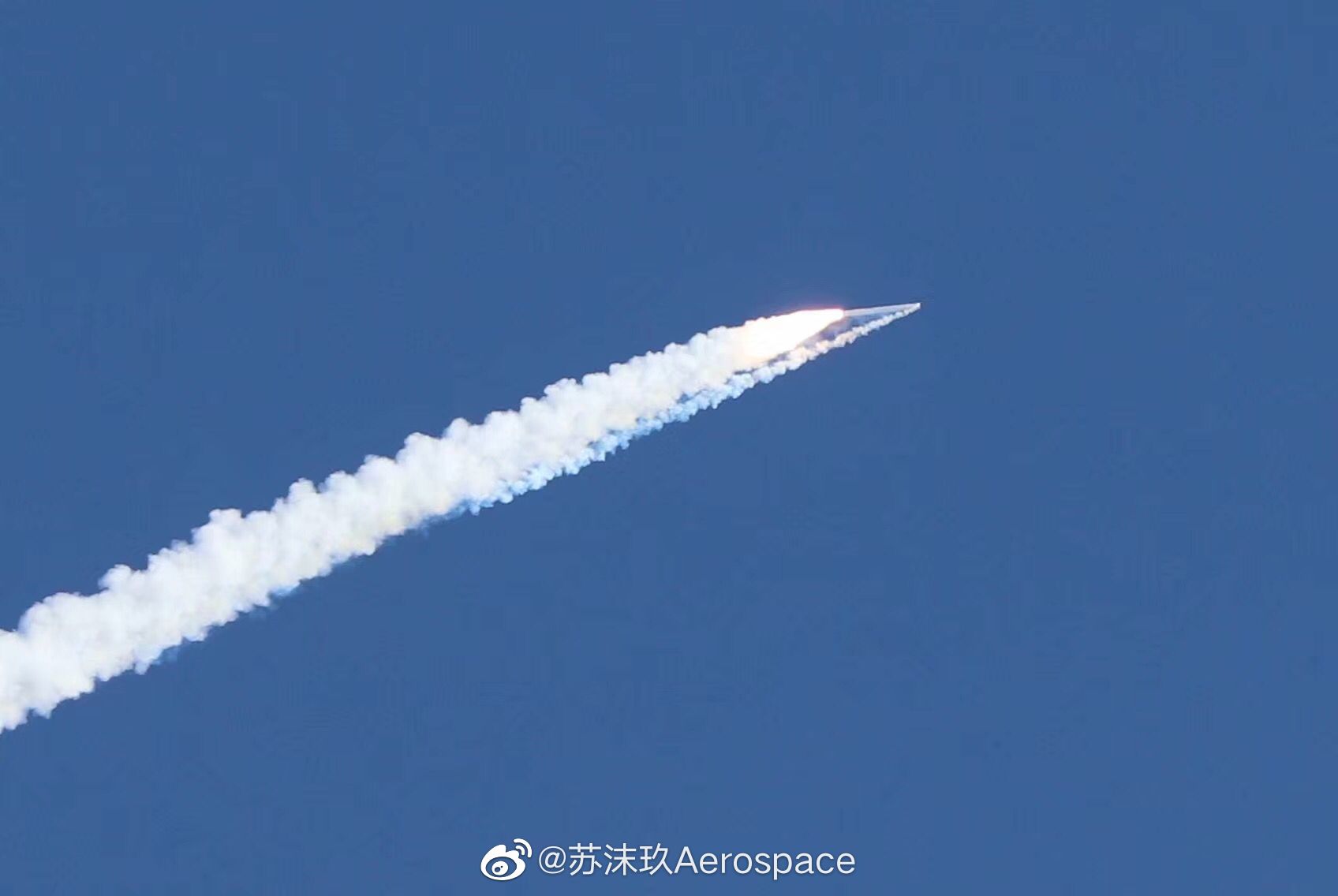 Hyperbola-1 failing during its second flight.

The second launch in February 2021 failed shortly after liftoff, with images showing debris raining down on the desert surrounding the launch site.

After a month-long investigation, the cause of the failure was revealed to be a piece of foam insulation installed on the rocket. The insulation was designed to be ejected from the rocket’s exterior during ascent; however, it flew into one of the four grid fins located on the first stage, which are designed to provide ascent guidance and stability.

The only confirmed payload aboard the second flight was a 6U CubeSat named Fangzhou-2 (“Ark-2”). The satellite would have verified technologies planned to be used on future satellites in the Fangzhou family.

A third flight took place in August 2021 and resulted in another failure due to a payload fairing separation issue.

Today’s launch marked the fourth flight of the Hyperbola-1 and its third consecutive failure. 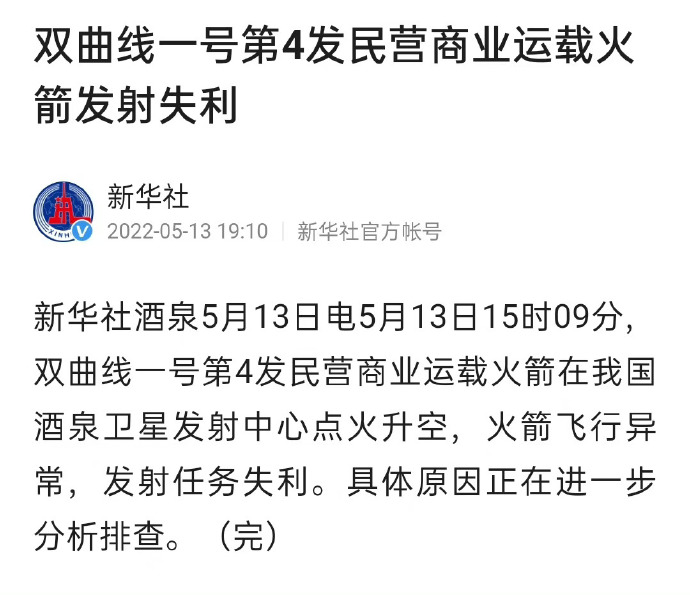 The tweet from the state-owned Xinhua news agency. Approximate translation: “At 15:09 on May 13, the fourth private commercial launch vehicle of the Hyperbola-1 ignited at the Jiuquan Satellite Launch Center. The rocket flew abnormally and the launch mission failed. The specific reasons are under further analysis and investigation.”

The launch was conducted from Site 95B at the Jiuquan Satellite Launch Center at 07:09 UTC on May 13. According to the Notice to Airmen (NOTAM) released before launch, the vehicle would have traveled south from the launch site, strongly suggesting a targeted polar/Sun-synchronous orbit like the rocket’s previous flights.

The Chinese state-owned Xinhua news agency issued a brief statement hours after the launch confirming the mission’s launch time and that it was not a success.

The report stated that the satellite “did not enter nominal orbit after separation,” and that not all mission objectives were accomplished.

(Lead photo prior to Hyperbola-1’s maiden flight – via iSpace)