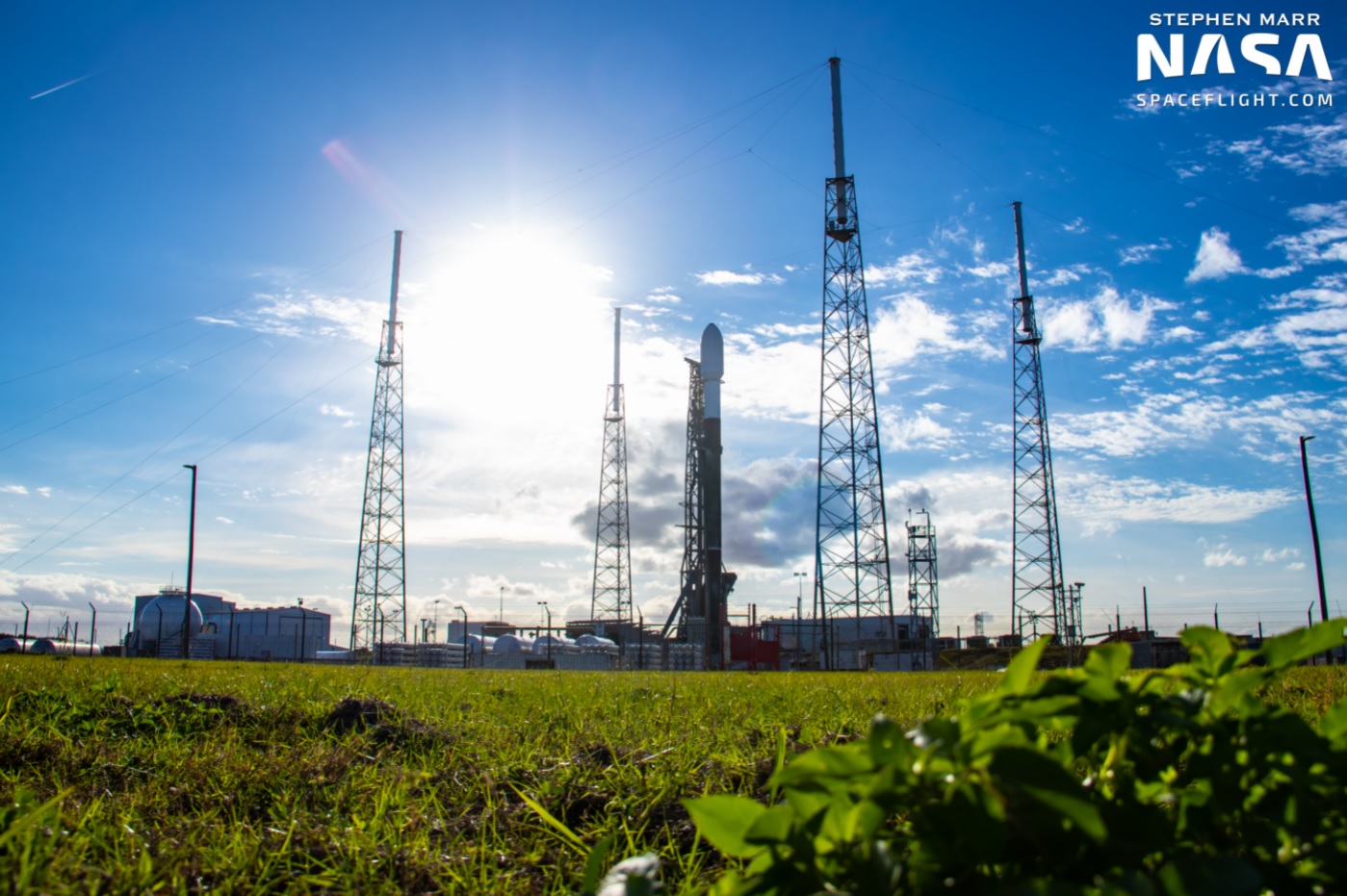 SpaceX is all set for their second orbital launch of the year, named Transporter-3. The liftoff is currently scheduled for the opening of a 29 minute launch window at 10:25 AM EST (15:25 UTC) on Thursday, January 13, from Space Launch Complex 40 (SLC-40) at Cape Canaveral Space Force Station in Florida.

This is the third dedicated rideshare mission operated by SpaceX, which will deliver 105 satellites to a 525-kilometer altitude Sun Synchronous Orbit (SSO).

After launching on a southbound path along the Florida coast and separating from the second stage, the booster will perform a boostback burn, followed by the entry and landing burns to return to Cape Canaveral and land on SpaceX’s Landing Zone 1 (LZ-1). The last RTLS landing was the Transporter-2 mission in June of 2021.

On its way to orbit, the second stage is expected to perform a “dogleg” maneuver to keep its heading slightly west of due south to reach its desired orbital inclination, while avoiding overflight of populated areas.

SpaceX’s rideshare program aims to enable frequent and economical access to popular orbits like the SSO, while also providing schedule flexibility to the customers. It costs as low as $1 million for a 200-kilogram payload headed to an SSO.

Onboard this mission is a plethora of small satellite payloads, most notably from Planet Inc. The Earth observation company has scheduled 44 SuperDoves satellites to launch as a part of their SkySat Constellation. SuperDove satellites are an upgraded version of their Dove satellite, which sports an upgraded camera aiming to improve the resolution of the images down to 50 centimeters from 72.

Kepler Communication is also launching six of its communication satellites as it aims to deliver networks all over the globe using small satellites in orbit.

Launching as well are payloads from Capella Space and Umbra Space, whose payloads are integrated and managed by Seattle-based launch integration company, Spaceflight Inc.

Excited to be launching 44 SuperDoves next week!

to join our ~200 satellite fleet; enhancing our daily scan of

Let's do this! @Planet

Capella is launching additional satellites to grow its constellation of Very High Resolution, Low Latency, Synthetic Aperture Radar (SAR) satellites in orbit. Umbra Space is launching its second commercial SAR satellite, Umbra-02. Alongside Umbra SAR-2001, launched on the previous transporter mission, the company plans to establish its own SAR constellation of 24 such satellites.

Spaceflight was originally planning to launch 13 co-manifested payloads. Ten of those payloads were planned to be deployed by their newly-developed chemical propulsion orbital transfer vehicle (OTV), Sherpa-LTC1. However, during integration of the spacecraft with SpaceX hardware, a propellant leak was discovered from the Sherpa’s propulsion system. There was no damage to the spacecrafts onboard the OTV, but the company decided not the fly it on Transporter-3 out of an abundance of caution.

Italy-based launch integration company D-Orbit will launch five CubeSats. Three of them will be launched for Poland-based company SatRevolution, and the other two for Aistech Space and Czech Aerospace Research Center (VZLU).

VZLU, in partnership with Spacemanic, will launch the VZLUSAT-2 satellite to verify technologies for a future Czech satellite constellation. Alongside an experimental camera and attitude control systems, there are second-generation devices onboard that have already been tested onboard the VZLUSAT-1 spacecraft, launched back in 2017. This payload was earlier scheduled to be launched onboard Spaceflight’s Sherpa but was then integrated at the last minute as the company teamed up with D-Orbit. 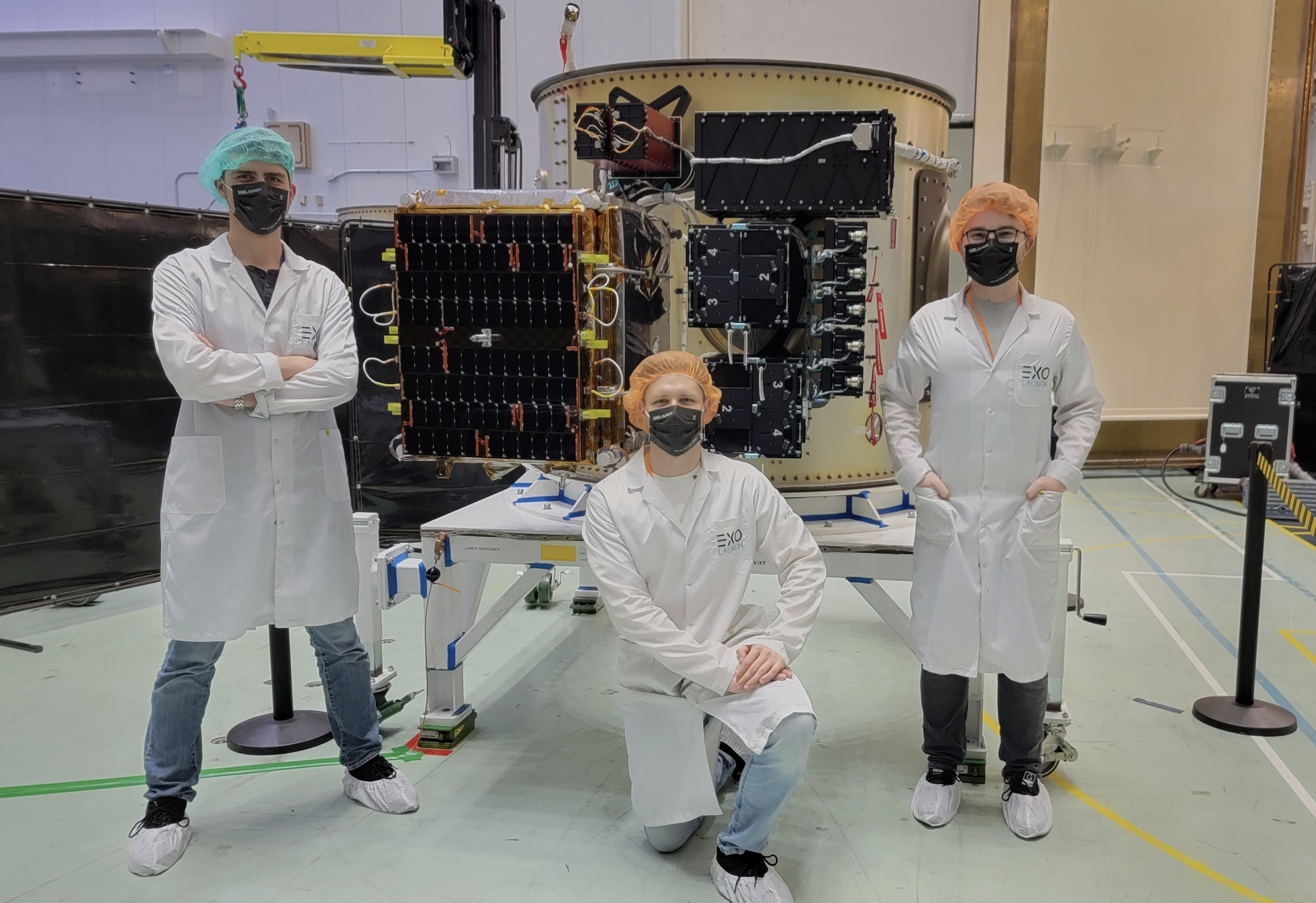 ExoLaunch team members pose in front of their payloads prior to final integration and encapsulation within Falcon 9’s payload fairing. (Credit: ExoLaunch)

The United Arab Emirates will also be launching their nanosat named DEWASAT-1, which was developed by Dubai’s Electricity and Water Authority (DEWA).

Other payloads manifested for Transporter-3 include a pair of satellites managed by ISILaunch, two microsats for ICEYE, and multiple payloads from Spire. In total, 105 spacecraft are on board; the identity of every single payload has not been confirmed.

Falcon 9 will lift off from SLC-40 and fly a southbound heading along the coast of Florida. The initial trajectory is driven by avoiding overflight of the populated areas of Florida. The first stage’s nine Merlin engines will burn for approximately two minutes and 15 seconds.

Meanwhile, the first stage will use its attitude control thrusters to perform a flip maneuver before reigniting three Merlin engines for the boostback burn. This burn will nullify all of the booster’s horizontal velocity and then place the stage on a trajectory back towards Landing Zone 1.

While the payload mass or destination orbit usually prevents the first stage from preserving the energy needed for this boostback burn, Transporter missions are usually relatively light and target low orbits, enabling this “Return to Launch Site” (RTLS) flight profile and removing the need for downrange drone ship recoveries.

The same three Merlin engines will light again to perform the entry burn, protecting the booster from reentry heating.

The single center engine will then light one final time to land B1058 on the pad at LZ-1.

Back in space, the second stage will be performing a coast phase which lasts until T+ 55 minutes. A brief, two-second burn will place the upper stage and the payload stack into the final orbit. Payload deployments begin at T+ 59 minutes and continue until T+ one hour and 27 minutes.