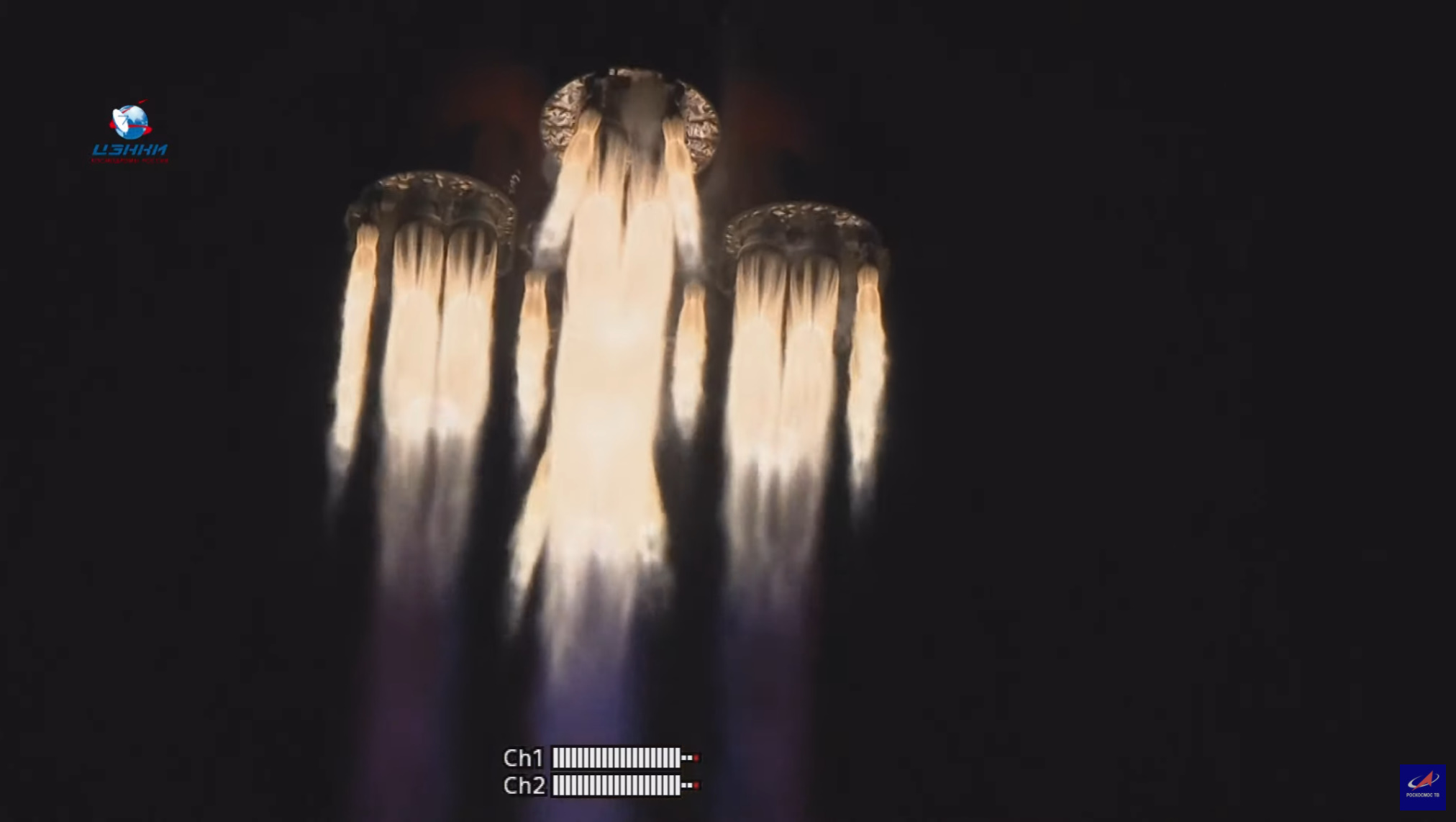 Starsem, Arianespace, and Roscosmos have launched a Soyuz 2.1b for OneWeb flight 12. Lift-off from Site 31/6 at the Baikonur Cosmodrome in Kazakhstan occurred at 13:10 UTC (08:10 EST) on December 27.

Also known as ST-37 by both Arianespace and Starsem, the latter is a joint French-Russian company that commercializes Soyuz launches.

This year, a total of five OneWeb missions were launched from the Vostochny Cosmodrome in eastern Russia, and another two launched from Baikonur. Vostochny is the newest cosmodrome for Russia, while Baikonur is the oldest and originated from the Soviet era.

The previous OneWeb launch from Baikonur occurred on September 14.

In total, the initial OneWeb constellation will consist of 648 individual satellites.

These satellites are initially launched into 500 km polar orbits and eventually raise their orbits to an operational orbit of 1200 x 1200 km above the earth. The OneWeb constellation consists of higher orbits than the Starlink constellation.

The first six OneWeb missions were launched on a Soyuz ST-B from the ELS (Ensemble de Lancement Soyouz) in Kourou, French Guiana. For the constellation, launches have occurred from Kourou, Vostochny, and Baikonur.

OneWeb was originally known as WorldVu. In March of 2020, OneWeb filed for chapter 11 bankruptcy, and its assets were bought in July 2020 by both the government of the United Kingdom and Bharti Enterprises Ltd.

The 36 OneWeb satellites for this mission were manufactured in Cape Canaveral, Florida near the NASA Kennedy Space Center Visitor Center. The satellites are built in Florida as part of a joint venture between OneWeb and Airbus Defense and Space.

After being built, these satellites departed the LLF (Launch and Landing Facility) at NASA’s Kennedy Space Center on a Volga-Dnepr Antonov An-124 aircraft and arrived at Baikonur at the end of November.

The Soyuz 2.1b for the mission was manufactured at the Progress Space Rocket Center in Samara, Russia. The sections of the launch vehicle were then transported by rail from Russia to the Baikonur Cosmodrome in Kazakhstan.

The stages of the Soyuz 2.1b were then assembled in the MIK-40 assembly building, located nearby Site 31/6. The Soyuz 2.1b is a derivative of the R-7 Semyorka ICBM (Intercontinental Ballistic Missile).

Meanwhile, the 36 OneWeb satellites were integrated with the payload dispenser and the Fregat upper-stage inside MIK-112. This is part of the same facility that facilitated final processing and assembly for both the Soviet N-1 and Energia-Buran vehicles prior to rollout.

The two high bays inside MIK-112 that were used for the N-1 and Energia-Buran were abandoned after the roof collapsed on the flight-proven Buran OK-1.01 orbiter on May 12, 2002, destroying it.

The Fregat and the payloads were then encapsulated by two aerodynamic fairings and transported to the MIK-40 complex for final assembly.

At nine hours before launch, final systems checks on the ground support equipment began. This was followed by the beginning of the automatic launch sequence on the Fregat upper stage around T-5 hours prior to launch.

At the T-3 hours and 30 minute mark, fueling began on the Soyuz 2.1b rocket. The three-stage launch sequence occurred at T-1 hour and 30 minutes. The two green launch gantry towers were lowered in the final 35 minutes of the countdown, revealing the launch vehicle.

Around 16 seconds prior to liftoff, the final umbilical mast retracted, signaling ignition of the four RD-107A engines on the four side boosters. These boosters are known as Blok B, G, D, and V, respectively. At the same time, the single RD-108A engine on the core first stage booster – known as Blok A – ignited.

Once confirmed that each engine is running properly, they increased power to full thrust at T-4 seconds. At T-0, the Soyuz 2.1b lifted off from Site 31/6.

This marked the second launch from this launch complex this month, with the first one being the launch of Soyuz MS-20 on a Soyuz 2.1a launch vehicle. With the retirement of Site 1/5 in 2019, the complex has remained the sole active Soyuz launch complex at Baikonur.

After liftoff, the Soyuz 2.1b rocket rolled to take the OneWeb payloads to the proper orbital inclination. The vehicle pitched down as it headed downrange of Baikonur.

After being depleted, the four side boosters separated from the Blok-A core stage, forming a formation known as the Korolev Cross. The two aerodynamic payload fairings later separated, exposing the payloads to space.

The RD-0124 engine on Blok-I ignited while the stage was still connected to Blok-A, which is called hot staging. Seconds later, Blok-I separated from Blok-A. Soon after, three skirt sections separated from the engine section on the Blok-I stage.

Blok-I continued to ascend under the RD-0124 engine until engine shutdown in orbit. Then, the Fregat upper stage separated. Soon after separation, the Fregat ignited its single S5.92 pressure-fed engine, which runs on UDMH and N2O4.

The Fregat then entered a coast phase before reigniting its engine for a second burn. After this second burn, the payload separation sequence for the 36 OneWeb satellites began and was successfully completed.

(Featured image: The Soyuz 2.1b is rotated to the vertical position at Site 31/6. Credit: Roscosmos).