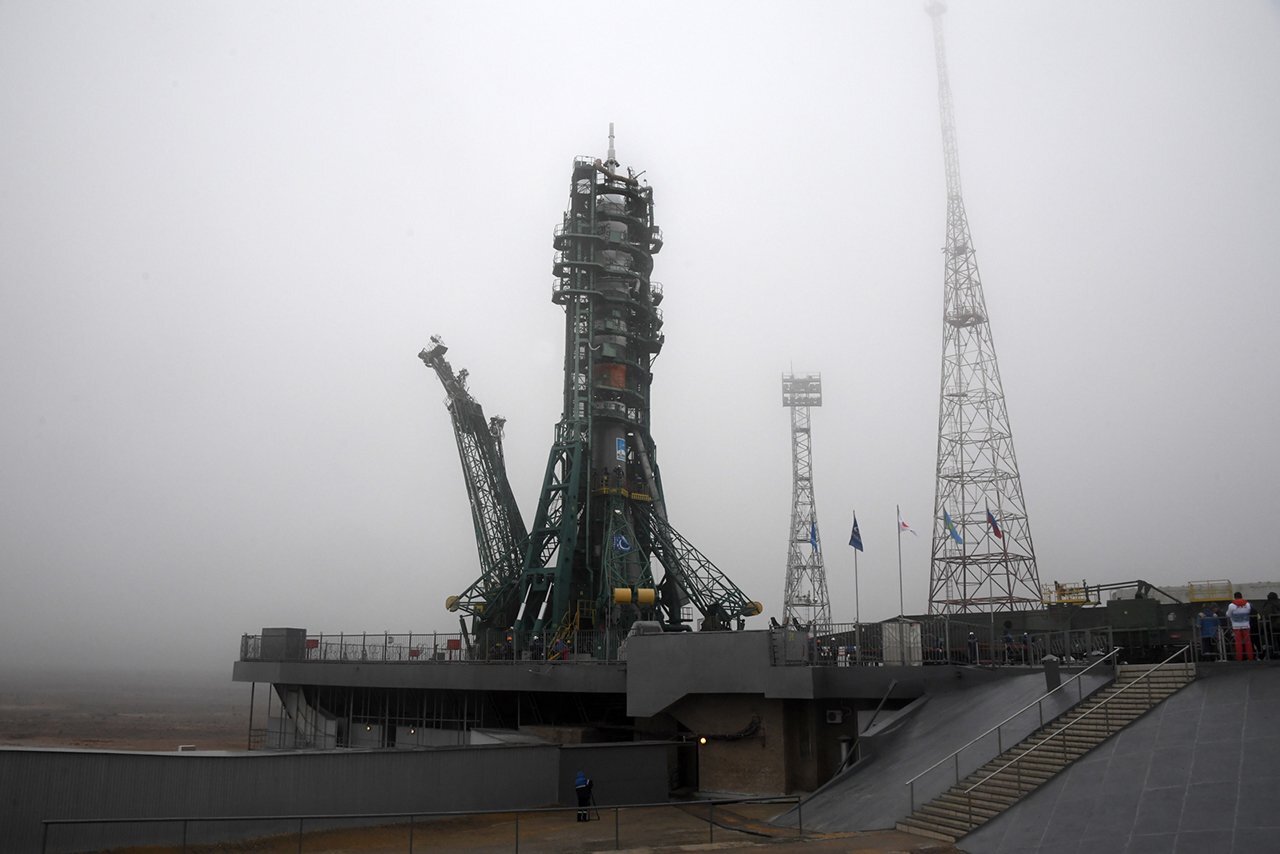 Roscosmos and Space Adventures are set to the launch Soyuz MS-20 space tourism mission to the International Space Station for a 12-day stay. The crew of three—including two Japanese space tourists—will fly onboard the Soyuz spacecraft, with liftoff currently targeted for 7:38 UTC (2:38 a.m. EST) Wednesday, December 8, 2021, from Site 31/6 at Baikonur Cosmodrome in Kazakhstan.

Onboard the Soyuz will be Yusaku Maezawa, a Japanese billionaire known for starting online businesses Start Today and Zozo. In addition to his Soyuz mission, he has a circumlunar flight aboard SpaceX’s Starship—called “dearMoon”—booked for no earlier than 2023. Maezawa purchased both available seats on this flight of Soyuz.

He will be joined by Yozo Hirano—a media producer from Zozo—who will document the MS-20 mission. This flight will mark the first time two Japanese astronauts fly together, as well as the first flight of any Japanese space tourist.

The mission will be commanded by experienced Russian cosmonaut Alexander Misurkin, on what will be his third spaceflight. During the mission, he will stand ready to pilot the Soyuz in case the automated guidance software fails. 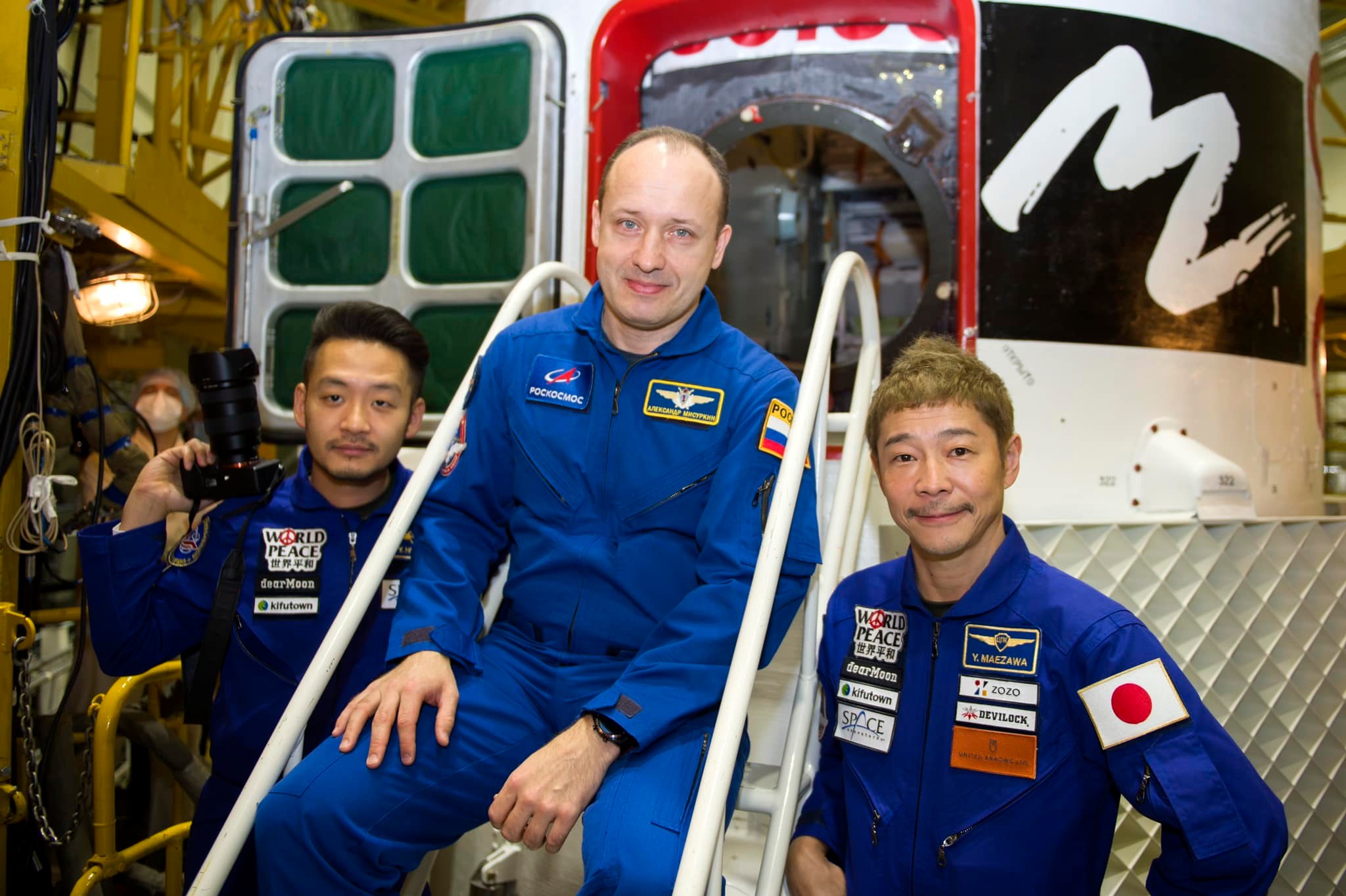 The Crew of Soyuz MS-20 posed in front of their capsule. From left to right, Yozo Hirano, Alexander Misurkin, and Yusaku Maezawa. Notice Maezawa’s nickname, “MZ”, painted on the fairing in the background. Credit: Roscosmos

Maezawa and Hirano will become the eighth and the ninth private citizens to fly on a mission scheduled by Space Adventures—a Virginia-based space tourism company. It will also end a decade-long pause in Russia’s tourism program, as the agency has not accepted tourists since Canada’s Cirque du Soleil co-founder Guy Laliberte in 2009.

While its primary purpose is tourism, astronauts Maezawa and Hirano will participate in various experiments, both on the ground and in the orbiting laboratory. One of them is the LAZMA medical experiment, which aims to study blood microcirculation in microgravity conditions during the prelaunch training at Baikonur.

In addition to this, the JAXA (Japanese Aerospace Exploration Agency) has prepared several experiments to be conducted independently on the ISS.

Preparations for the Soyuz MS-20 mission began as early as November 21 as the technical management approved loading the crewed spacecraft with propellant components and compressed gases. The crew seat liners—which are custom-made for every cosmonaut—were also installed in the descent module as the crews inspected the spacecraft’s onboard systems. 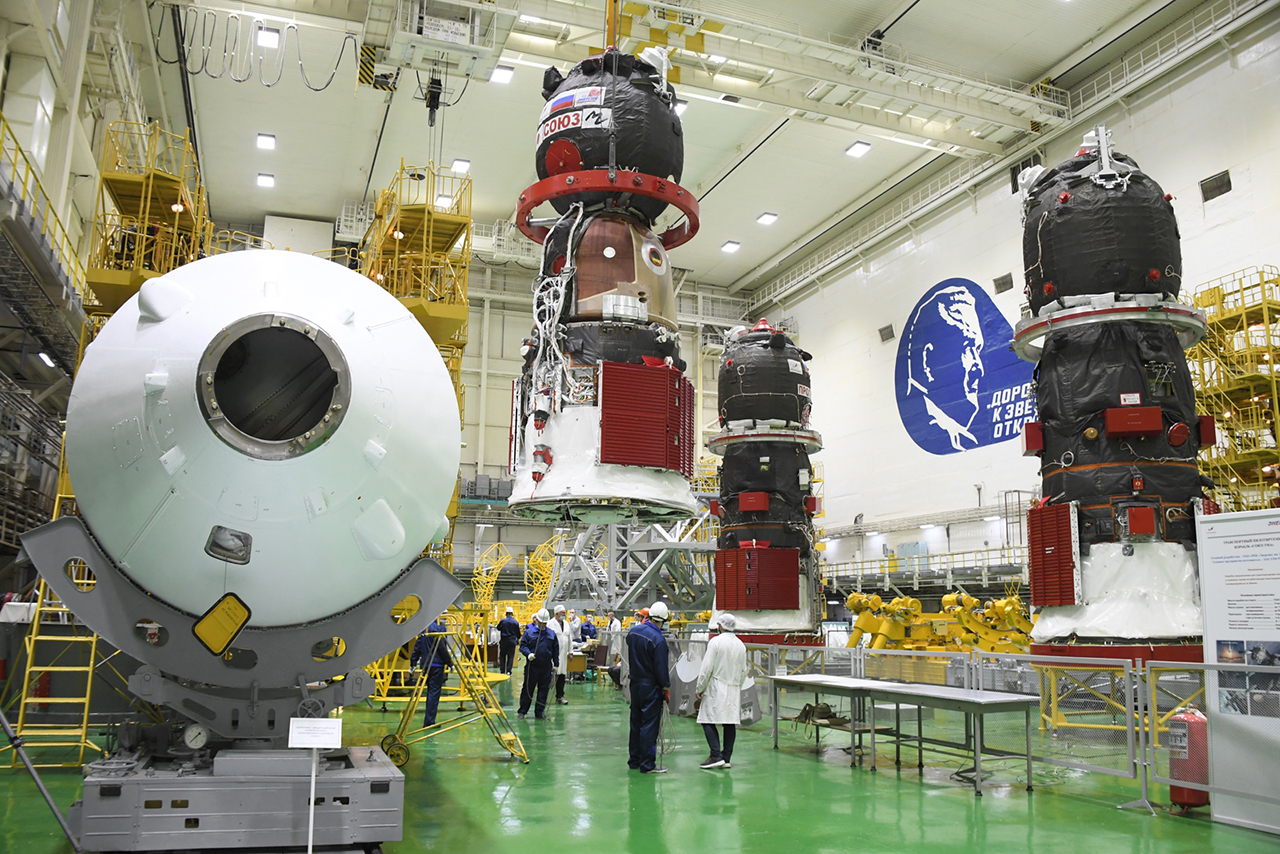 The Soyuz MS-20 spacecraft (center) is lifted to a stand for encapsulation in its launch shroud. Two Progress spacecraft can be seen on the right. Credit: Roscosmos

After fueling, the Soyuz spacecraft was brought back to the Site 254 integration and test facility for further processing operations. This included payload loading and installation of multilayer thermal insulation, alongside weighing and mating to the spacecraft adapter of the launch vehicle.

On November 26, specialists from RSC Energia and Roscosmos mated the Soyuz spacecraft to the adapter section of the launch vehicle’s upper stage. Six days later, the teams loaded the spacecraft onto a train and transported it to Site 31 to prepare the spacecraft for flight. The same day, the MS-20 crew also conducted an inspection of their spacecraft, familiarizing themselves with the spacecraft layout and the placement of cargo.

By December 3, the Soyuz MS-20 spacecraft was mated with the third stage of the Soyuz-2.1a launch vehicle. It was later moved to the transport and installation unit and mated with the previously assembled stack of the first and second stages. Once complete, the State Commission for Flight Testing of Crewed Space Systems held a readiness review for the rollout of the Soyuz rocket. After receiving the GO, Soyuz MS-20 was rolled out to the launch pad on Sunday morning to begin pre-flight preparations.

Next stage of rollout

The Soyuz-2.1a rocket with the #SoyuzMS20 manned spacecraft is installed on the Site 31 launch pad.

Now the service structures are to roll up pic.twitter.com/PNwvXEYV0Q

The launch teams then began connecting the servicing lines to the ground support equipment to perform stand-alone tests of the spacecraft and the launch vehicle.

With some stand-alone tests being completed for the spacecraft, two days before the launch, on Monday, December 6, the teams conducted general tests of the launch vehicle by simulating the liftoff and its flight till the spacecraft separation in the target orbit.

On launch day, the three crew members will suit up and make their way by bus to the launch site. They will then ascend the service towers and board their Soyuz spacecraft.

Approximately six hours after liftoff, the spacecraft will dock to the Poisk module in the International Space Station where it will remain for 12 days. As previously stated, the crew will spend parts of their mission conducting experiments and documenting the mission.

Once their stay at the Station is complete, they will depart the laboratory onboard Soyuz and return to Earth for a landing in Kazakhstan.