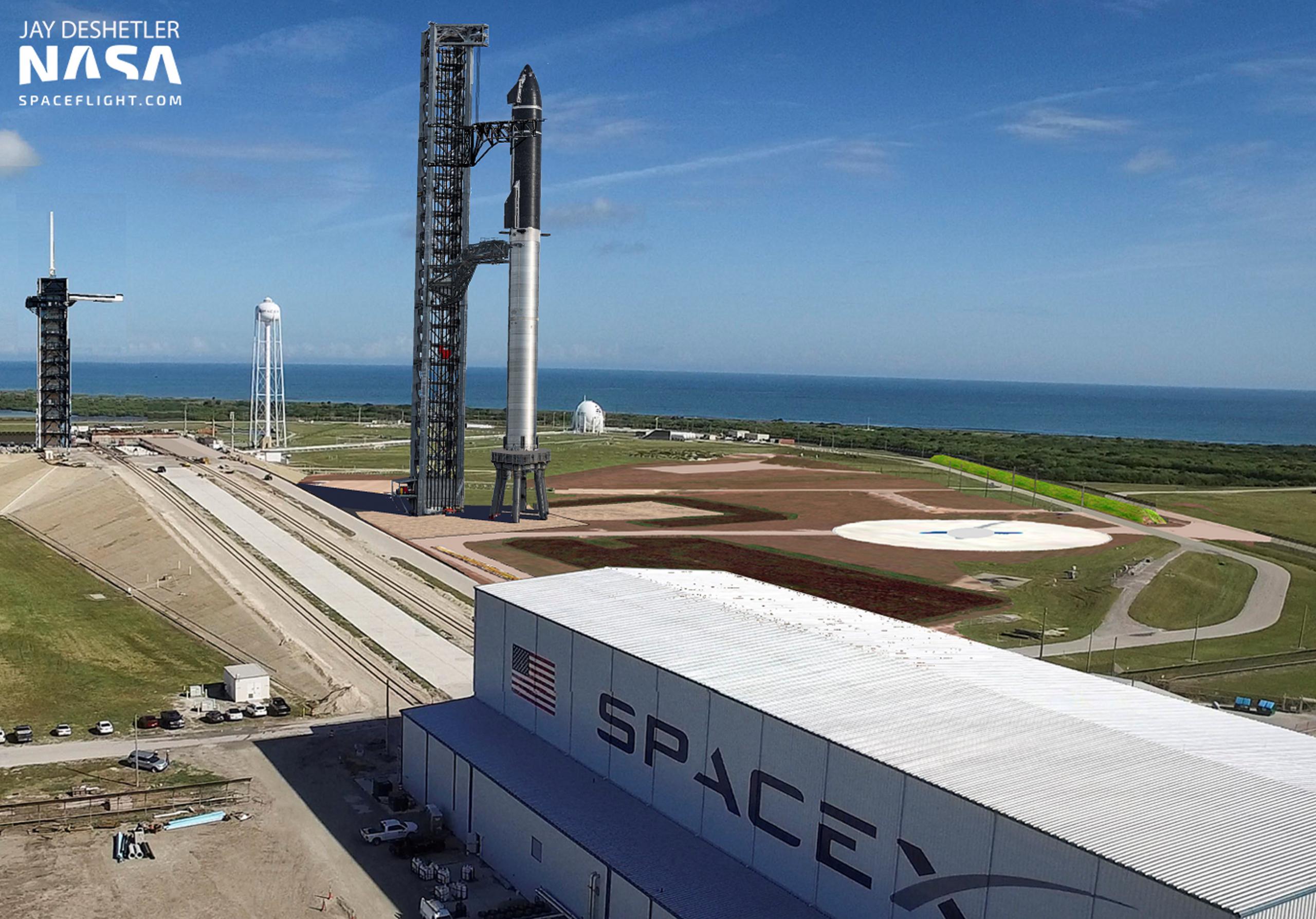 Elon Musk has confirmed Starship will add another chapter in Launch Complex 39A’s incredible history at the Kennedy Space Center.

Although plans have always involved the Kennedy Space Center (KSC), early work on a pad for Starship at 39A has been mothballed since 2019, as SpaceX placed its entire focus on Starbase in Texas. However, with one tweet, Musk confirmed construction work has returned to 39A for the rocket that is set to land humans on the lunar surface decades after Apollo 11 launched from the same launch site.

SpaceX’s push toward Starship launches has been entirely focused on its South Texas facility.

The expansion of Starbase has been stunning, with SpaceX setting up a Production Facility and a multi-vehicle launch site a few miles down the road.

Further expansion of both sites is either ongoing or in planning as the Texas site ramps up towards its first orbital launch attempt early next year, followed by numerous launches throughout 2022.

While Starbase will be the primary base of operations for Starship, the Cape was always in mind. The very first overview of the vehicle, several name changes ago, portrayed Starship (as the Interplanetary Transport System – ITS) launching from a clean pad 39A.

Signs of the Floridian Starship push began with a mini-Production Facility in Cocoa, where the Mk2 vehicle was constructed in parallel with Mk1 at Starbase.

Then, early signs of pad construction were observed at 39A, finally providing clues as to where SpaceX wanted to position the facility inside the complex.

Sentinel-2 satellite images between September and October 2019 show the rapid progress at 39A.

Contractors then started to work on infrastructure, which included a ramp that was likely to make up the launch mount.

Notably, this work was ongoing while Starbase was focused mostly on the suborbital site for its hop tests instead of the Orbital launch site. 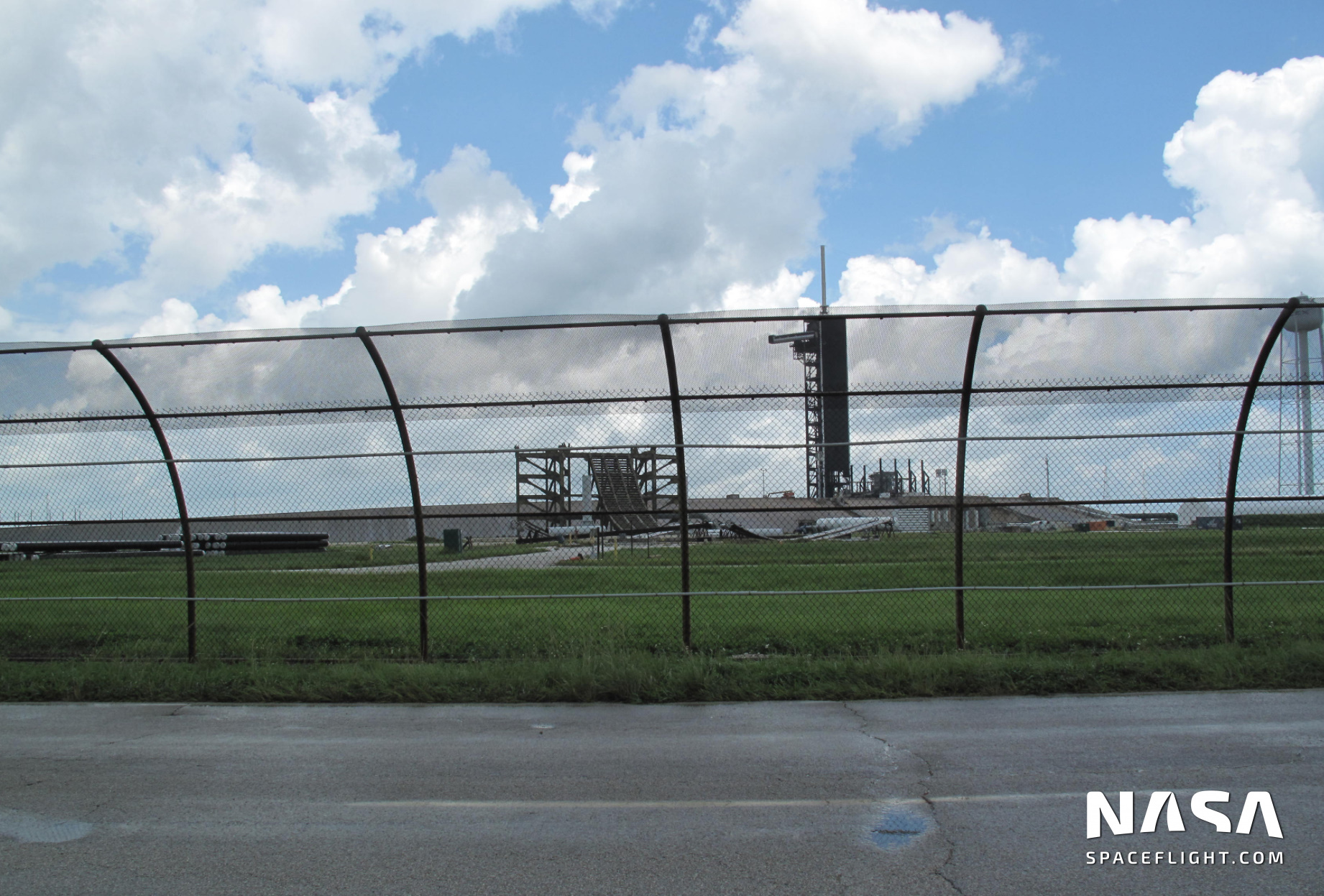 However, work paused early into 2020. At the time, it was well understood that Starship’s work was primarily focused at Starbase, and then potential impacts related to SpaceX’s busy Falcon schedule at 39A, along with the impacts of the Covid pandemic, further delayed the work in Florida.

Work remained mothballed, and questions related to satellite photos of 39A that highlighted the outline of the Starship pad at 39A continued to go unanswered, even after SpaceX won the Human Landing System (HLS) contract that all-but-confirmed NASA launches of Starship from KSC.

Then, somewhat out of the blue, Elon Musk tweeted the news many wanted to hear: “construction of Starship orbital launch pad at the Cape has begun.”

Given there are several options outside of 39A where a new pad could be built, clarification of Starship’s Florida launch site location at 39A was soon forthcoming.

Soon after Elon Musk’s tweet, updated imagery confirmed that the old mount/ramp that had stood mothballed for two years had already been demolished in short order.

Imagery from Sentinel-2 taken @ 2021-12-04 16:15:24 UTC shows that the original Starship launch mount is now full dismantled.
You can see this clearly in the second image comparing the new images to one from the 29th of November. https://t.co/LCGpEbF3pb pic.twitter.com/7tdCY0lG4w

This clears the path for realizing the outlines in the Environmental Assessment that was conducted in September 2019.

Some elements are likely to be updated based on Starbase’s changes, such as removing the Flare Stack and utilizing a recondenser system. 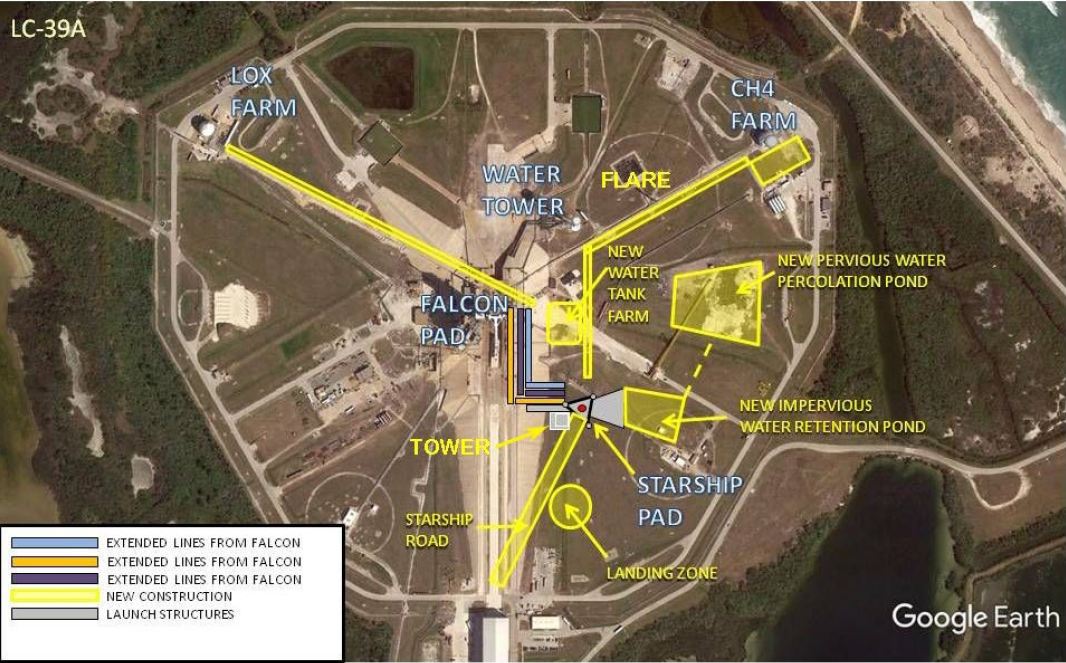 Built in the 1960s for the Apollo Program, 39A – and the adjacent 39B – are engineering marvels in their own right.

Launching both STS-1 and STS-135, 39A provided the bookends to the Space Shuttle Program before being temporarily mothballed. 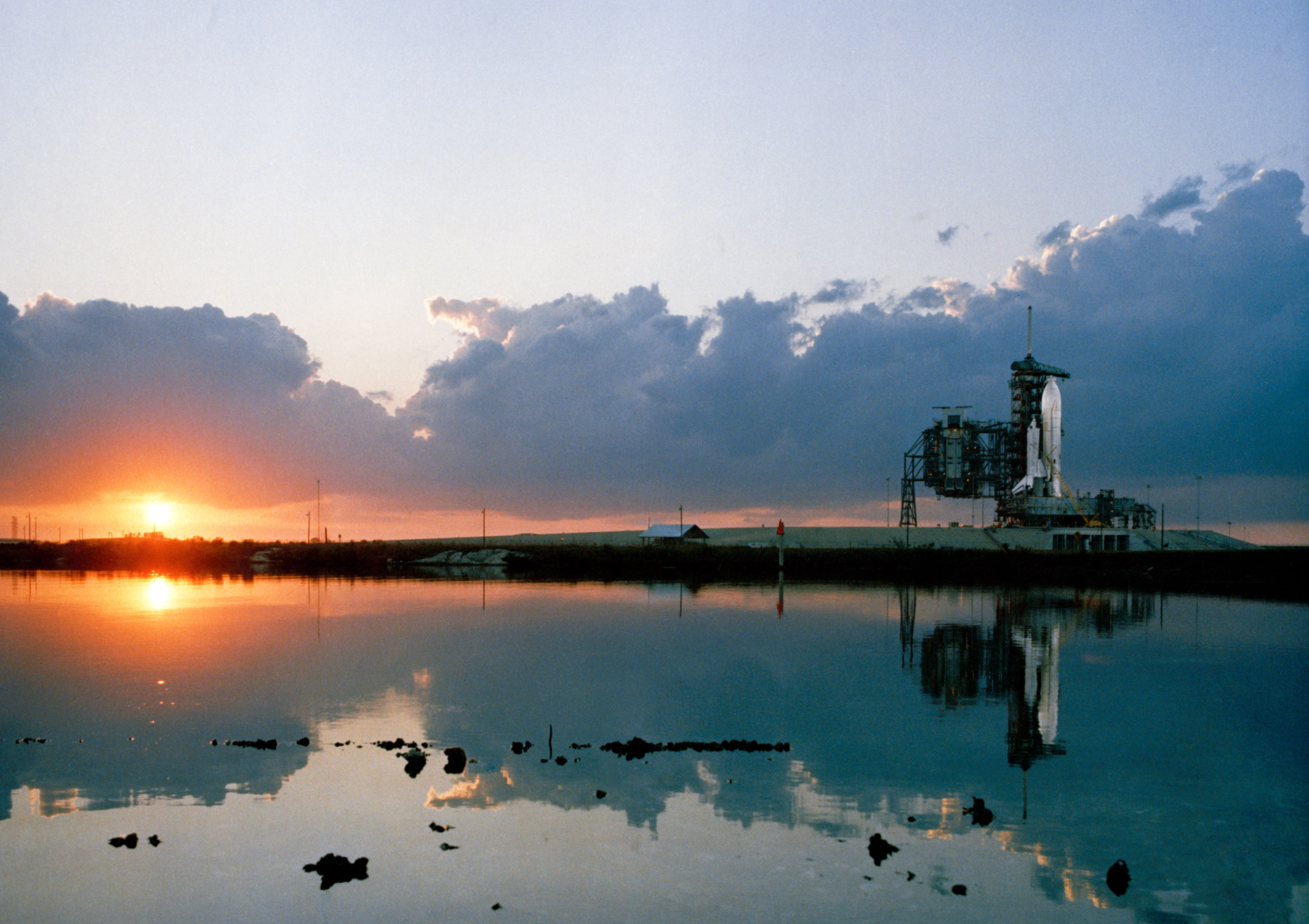 KSC had already begun converting 39B into a clean pad, initially for Ares I, before continuing the conversion to prepare for SLS.

A deal in 2014 between SpaceX and Space Florida – the State’s aerospace economic development agency – injected new life into 39A.

Effectively handing over 39A to SpaceX under a multi-decade lease, the company added a Horizontal Integration Facility (HIF) at the bottom of the launch ramp.

This occurred alongside the conversion of the Fixed Service Structure (FSS) under a staged development that eventually saw the addition of crew launch elements, such as the Crew Access Arm (CAA) for the Dragon spacecraft. 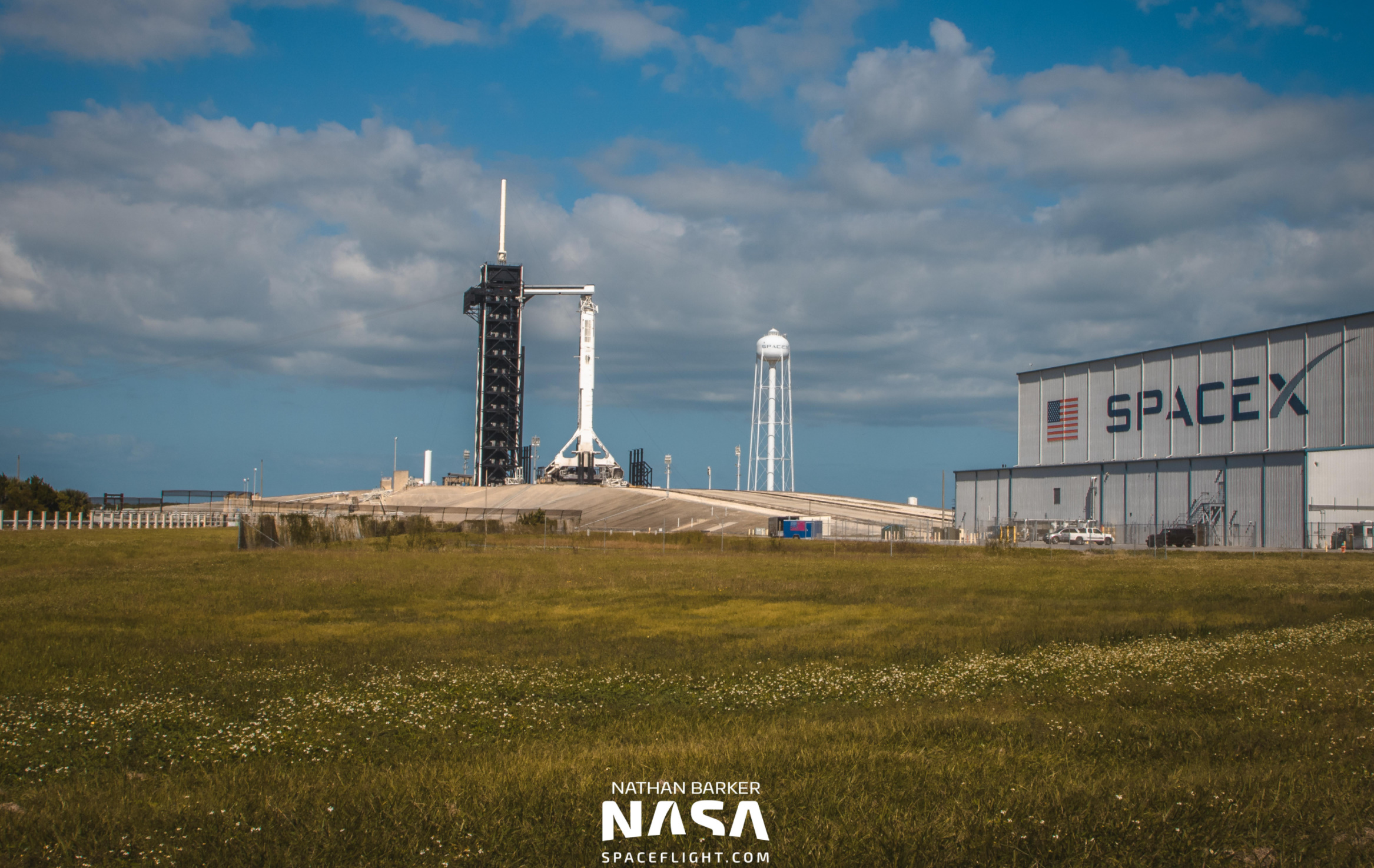 39A during Crew-3 – via Nathan Barker for NSF

This work updated 39A to a modern crew launch facility while honoring 39A’s past by updating heritage structures.

SpaceX’s missions from the pad have also honored its history, with numerous flagship payload missions, the opening launches of the Falcon Heavy rocket, and most importantly, enabling the return to US domestic crew launches after a gap of nearly ten years from the final Shuttle launch from 39A, STS-135. 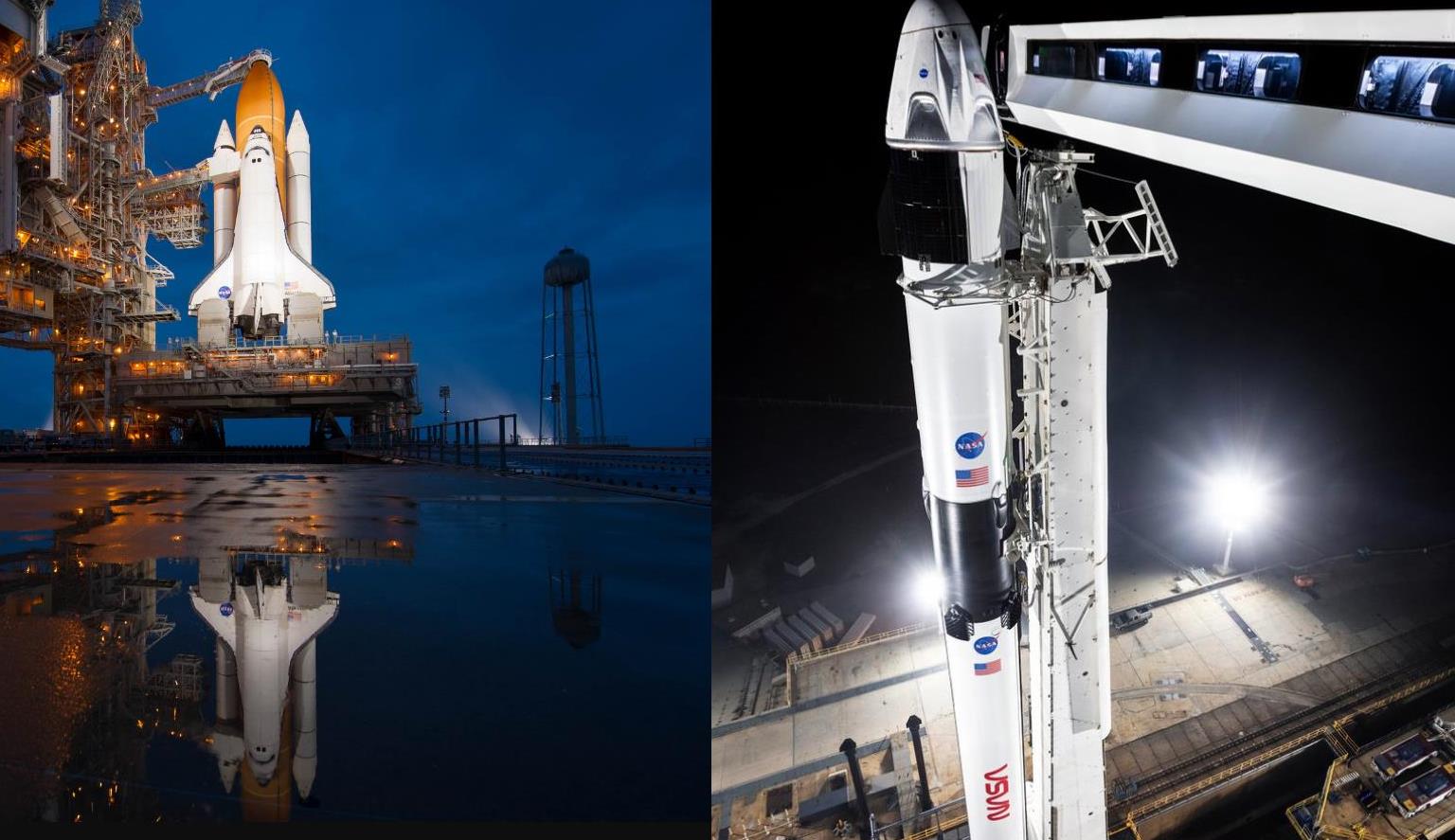 It even hosted the first private mission to orbit, with the launch of Inspiration4.

More Falcon-related construction will begin soon, with the assembly of a new Mobile Service Tower (MST), required after SpaceX won a contract under Phase 2 of the Department of Defense’s National Security Space Launch (NSSL) program.

Some military payloads must be kept in a vertical orientation during processing and mating with the launch vehicle, requiring a switch from SpaceX’s standard horizontal processing. 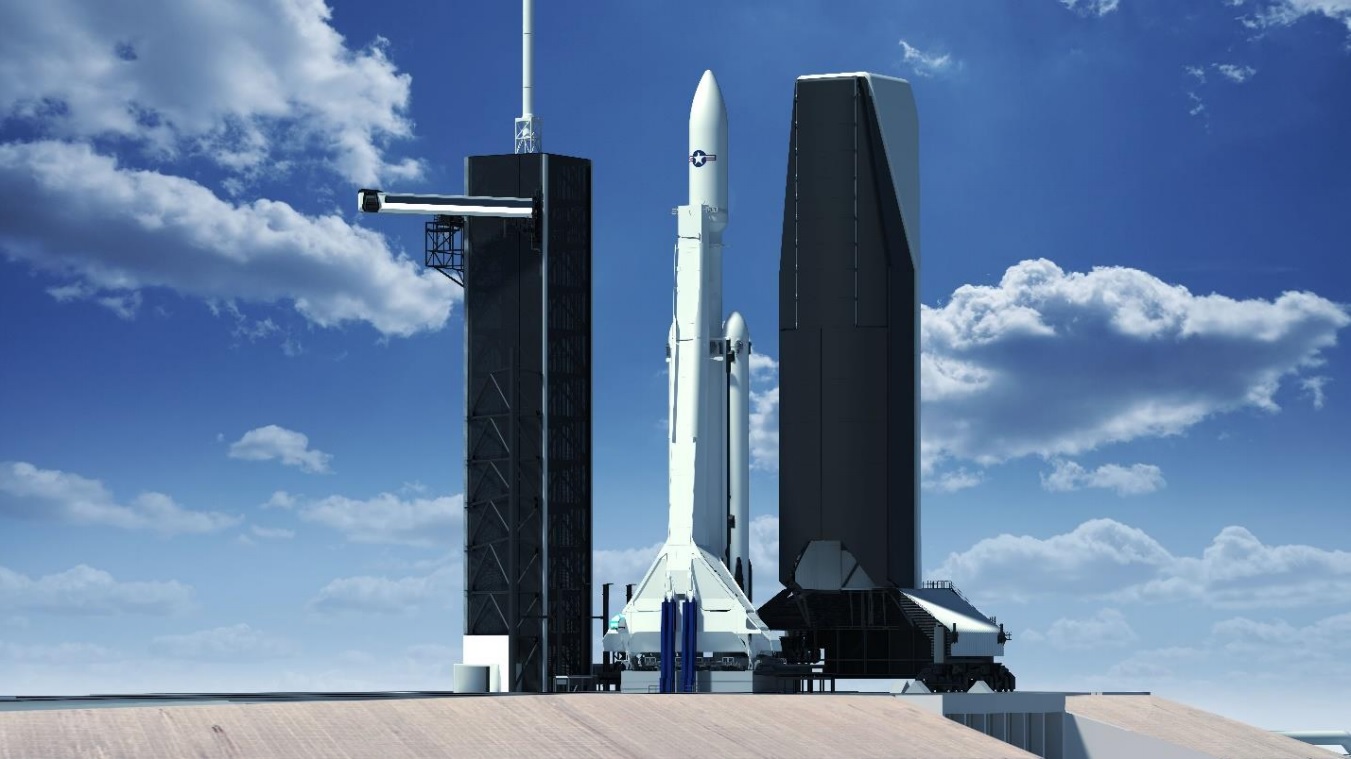 The MST that will be constructed at 39A – via SpaceX

With Starship, some clues about the appearance of the launch structures can be found at Starbase, which now has its massive Tower already built.

Notably, Elon Musk added that the 39A construction will see “similar, but improved, ground systems and tower to Starbase.”

39A is hallowed spaceflight ground – no place more deserving of a Starship launch pad!

Will have similar, but improved, ground systems & tower to Starbase.

Some lessons may have been learned during the construction of what’s set to be two launch towers at Starbase, aiding the planning of 39A’s Tower.

It is still likely 39A’s Tower will include its own Mechazilla system, with catching arms (chopsticks) for the stacking and catching of the Booster and Ship.

However, this would also be an update from the EA report, which was created around the time Starship was still planning to return to a nearby landing pad.

The pace of construction will also be closely followed, given Starbase’s known priority. It is likely that Starbase will push through the test program and enable Starship to become operational, flying many Starlink missions to demonstrate its reliability before debuting from Florida.

These range from where the vehicles will be constructed, be it Starbase and then shipped to KSC akin to the path the Saturn V stages and Shuttle External Tanks took a barge trip into the Turn Basin at KSC, or if a new facility will be built at one of SpaceX’s Florida sites – such as Roberts Road, which has room for expansion.

SpaceX have submitted plans for further onsite development at Roberts Road that includes an expansion for HangarX and more parking areas.

An outline for this expansion have been visible in both satellite and ISS imagery for the last month.

There also remains the potential that SpaceX could lease one of the spare High Bays inside the Vehicle Assembly Building (VAB) ahead of stacking at the pad.

High Bay 2 was set aside for commercial use and taken by Northrop Grumman for processing its OmegA rocket. However, now that rocket has been canceled, HB2 could be handed over. There is also the potential of reactivating High Bay 1 while High Bay 3 is being used by SLS operations.

One thing is for sure, that Starship will grace the Space Coast and become the latest resident at the world’s most famous launch complex.

Grab some cool gear and help to support our content: https://shop.nasaspaceflight.com/

The post Starship to stand on the shoulders of Saturn V and Shuttle at 39A appeared first on NASASpaceFlight.com.