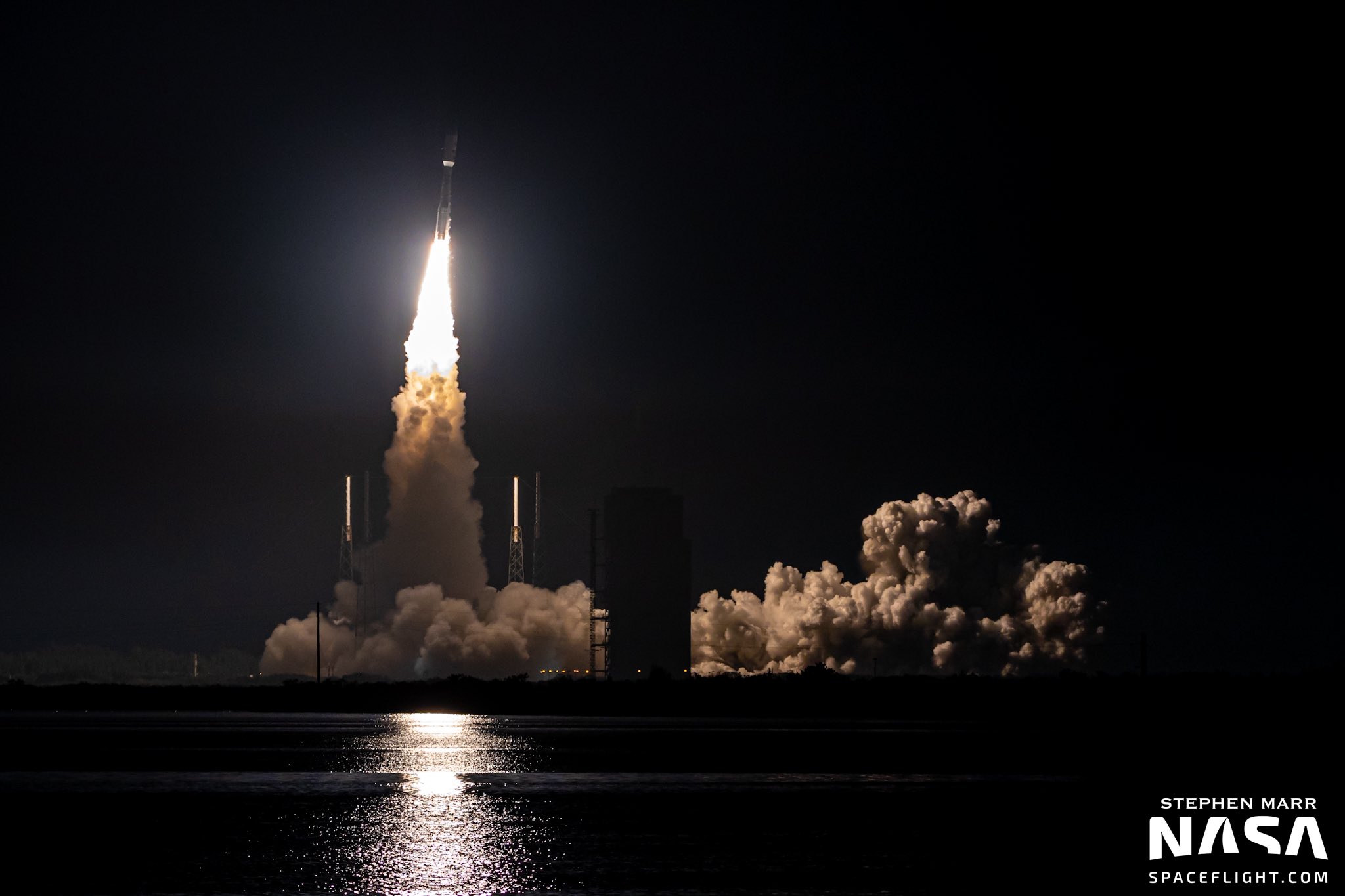 The mission will also test several new technologies onboard the company’s Atlas V launch vehicle during the longest duration mission for an Atlas rocket to date. After a 24 hour delay due to a leak in the RP-1 ground storage system and then an additional day to verify the fuel’s sample integrity, liftoff occurred at December 7 at 5:19 AM EST (10:19 UTC) after several holds for unacceptable high altitude winds.

STP-3 marks the third dedicated launch for the U.S. Space Force’s Space Test Program. The program is designed to fly experimental payloads in order to mature technologies for future Department of Defense missions. The STP-3 mission is composed of two payloads: a primary spacecraft and a rideshare spacecraft. 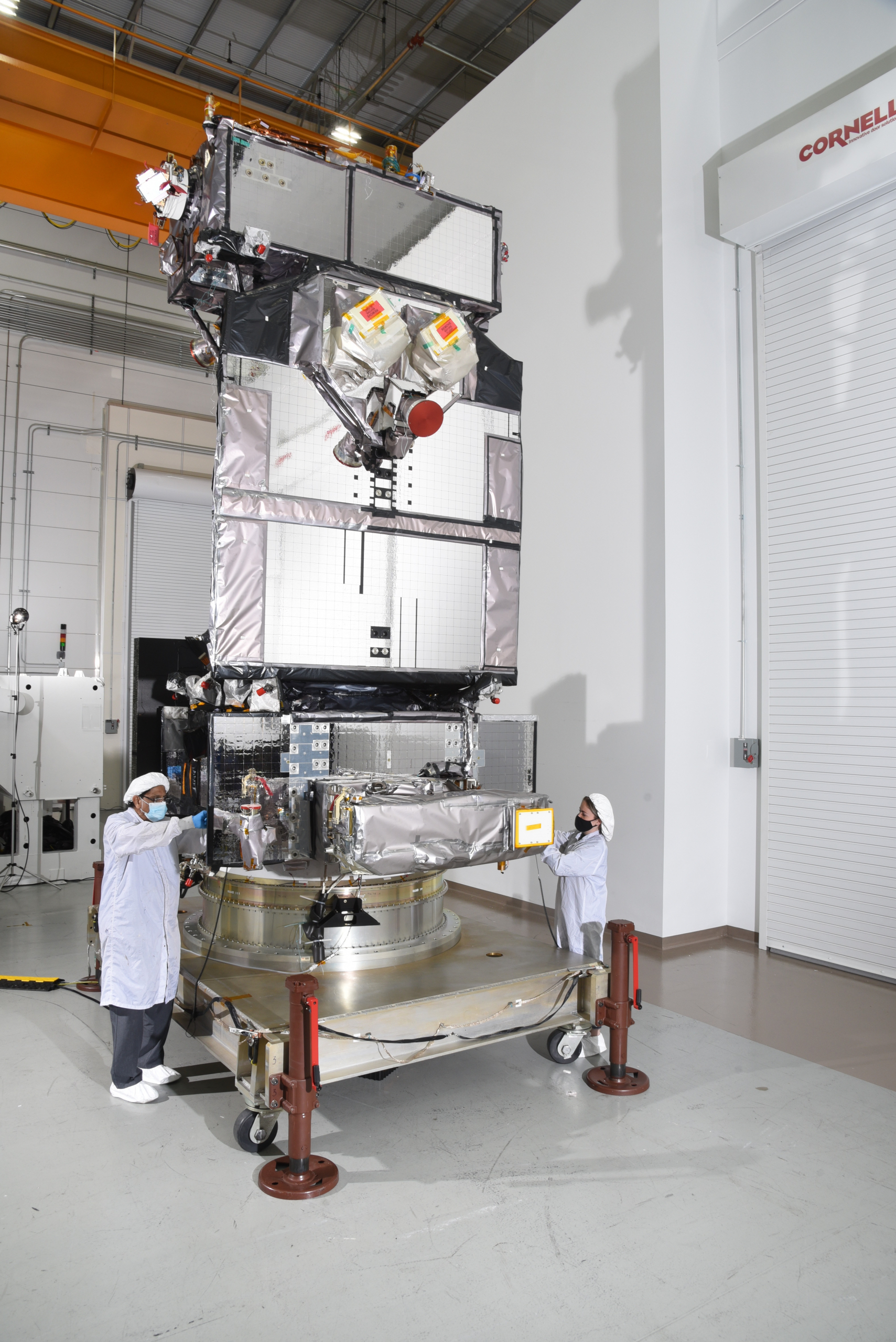 The primary spacecraft is known as STPSat-6, and was designed and built by Northrop Grumman. STPSat-6 will host nine experiments including those for NASA and the NNSA (National Nuclear Security Administration).

NASA’s LCRD (Laser Communications Relay Demonstration) is designed to test laser communications as an alternative to typical radio communications for NASA spacecraft. LCRD will communicate with ground stations as well as future in-space experiments such as a payload called ILLUMA-T that will be attached to the International Space Station in 2022.

Other payloads aboard STPSat-6 include “several Department of Defense Space Experiments Review Board space weather and situational awareness payloads,” according to ULA.

LDPE-1 was also built by Northrop Grumman, and it is based off of the ESPAStar line of spacecraft the company produces. It also derives technologies from another ESPAStar named EAGLE that was flown on a previous Atlas V mission in 2018.

While LDPE-1 will carry several payloads, the exact nature of them are currently unknown. At least two more LDPE spacecraft are scheduled to launch on Space Force missions, including a Falcon Heavy launch called USSF-67.

Both STP-3 payloads will be delivered directly into a geosynchronous orbit approximately 36,100 kilometers above the Earth.

During the STP-3 mission, ULA plans to demonstrate three new technologies onboard its Atlas V rocket: a new fairing design, an upgraded power system for the two spacecraft, and what the company calls “Enhanced Navigation.” All of these technologies will feature on the company’s future Vulcan Centaur rocket.

Manufactured in Decatur, Alabama–right next door to ULA’s factory–by RUAG Space, the new fairing uses a manufacturing method called Out-of-Autoclave, and will replace the fairings made by RUAG in Switzerland. While they are the same size as previous Atlas V 5.4 meter-class fairings, the new process “weighs and costs less while being easier and quicker to make,” according to ULA.

The new Out-of-Autoclave (OoA) fairing design made by RAUG Space in Decatur, AL will be used on the upcoming @ulalaunch of STP-3. The OoA fairings will be flown on Atlas missions and work towards Vulcan qualifications. Learn more

Due to STP-3’s nearly seven hour journey to a circular geosynchronous orbit, the Atlas V rocket is flying for the first time with what the company calls an IFPS (In-Flight Power System) which keeps the batteries of both spacecraft fully charged throughout the flight. This means that the spacecraft have more time on battery power before needing to rely on their deployable solar panels after separation from the Atlas V’s Centaur upper stage.

ULA is also debuting what the company refers to as “Enhanced Navigation,” a system that uses GPS data to compliment the rocket’s onboard flight computer in order to increase orbital insertion accuracy. According to ULA, the system was tested on a previous launch last year, and “will be available for use on all Atlas V missions going forward.” The ULA-manufactured upper stage for Boeing’s Space Launch System, called ICPS, will also use “Enhanced Navigation.”

On December 3, the Atlas V 551 (meaning five meter diameter fairing, five solid rocket boosters, and one upper stage engine) rolled from its Vertical Integration Facility to its launch pad at Space Launch Complex 41. Afterward, the rocket’s first stage was filled with its kerosene fuel, which can be loaded ahead of time as Atlas V does not rely on super-chilled kerosene as some other rockets do, such as Falcon 9.

About 35 seconds after launch, the Atlas V passed the speed of sound, or Mach 1.

At one minute and 47 seconds after launch, all five solid rocket boosters were jettisoned. First, two separated, followed by the other three about two seconds later. The payload fairing separated from the rocket about three and a half minutes after launch.

At four minutes and 27 seconds after launch, the RD-180 engine on Atlas’ first stage shut down, and the Centaur upper stage carrying the STP-3 payloads separated. Centaur’s RL-10 engine burned for about six minutes to reach an initial orbit.

An hour and seven minutes after launch, Centaur ignited once more and burn for about six minutes to raise the apogee, or highest point in the orbit, to a geostationary altitude.

After a roughly five hour long coast phase, the Centaur ignited again, circularizing its orbit and changing its orbital inclination from about 26 degrees to zero degrees with a roughly three minute burn.

At six hours and 30 minutes after launch, STPSat-6 separated, followed by LDPE-1 at seven hours and 10 minutes, ending the longest duration mission in Atlas rocket history.