The Orion spacecraft that will fly to the Moon on NASA’s Artemis 1 mission was lifted atop its Space Launch System (SLS) rocket on October 20, completing major assembly of the full vehicle stack.

Integrated operations team members from the agency’s Exploration Ground Systems (EGS) program and prime launch processing contractor Jacobs received the spacecraft in the Vehicle Assembly Building (VAB) early the day before on October 19, hooked up a heavy lift crane, and moved Orion up and over from High Bay 4 to High Bay 3, where the SLS stands on its Mobile Launcher.

Final assembly is the most visible of the preparations, but several weeks of testing and reviews are left to complete for the programs within Exploration Systems Development (ESD) and the division as a whole. Recent forecasts of launch readiness for this first flight across the division and programs are trending towards the end of January 2022, and tentative planning is looking at conducting final programmatic reviews ahead of the two-week-long lunar launch opportunity in February.

Orion mated to SLS on October 20

Overnight from October 19 into October 20, the Artemis 1 Orion spacecraft was lifted by one of the 325-ton cranes in the VAB off its transporter in High Bay 4 up towards the ceiling of the giant building. Crane operators then translated the approximately 35 metric ton Orion launch stack over the Transfer Aisle through openings at the top of the high bays into the SLS integration cell in High Bay 3.

Orion was then lowered on top of the already-integrated SLS flight hardware for Artemis 1 to be bolted together. Mating the spacecraft to the launch vehicle was accomplished in two phases, soft mate followed by hard mate. After the structural attachment, electrical and data connections between Orion and SLS will be completed, along with umbilical connections from the Mobile Launcher to the spacecraft.

The fully-fueled, flight-ready spacecraft was transported from the Launch Abort System Facility (LASF) to the VAB overnight from October 18 to October 19, arriving in VAB High Bay 4 early in the morning. Working in shifts around the clock for the critical operation, the integrated operations team of EGS and Jacobs attached a custom lift fixture to the tower of Orion’s Launch Abort System (LAS).

The fixture had already been rigged to one of the VAB’s 325-ton capacity cranes as a part of lift preparations. Orion lift operations with the crane occurred during the overnight shift following final inspections of the mating surfaces on both the Orion and SLS sides of the connection. 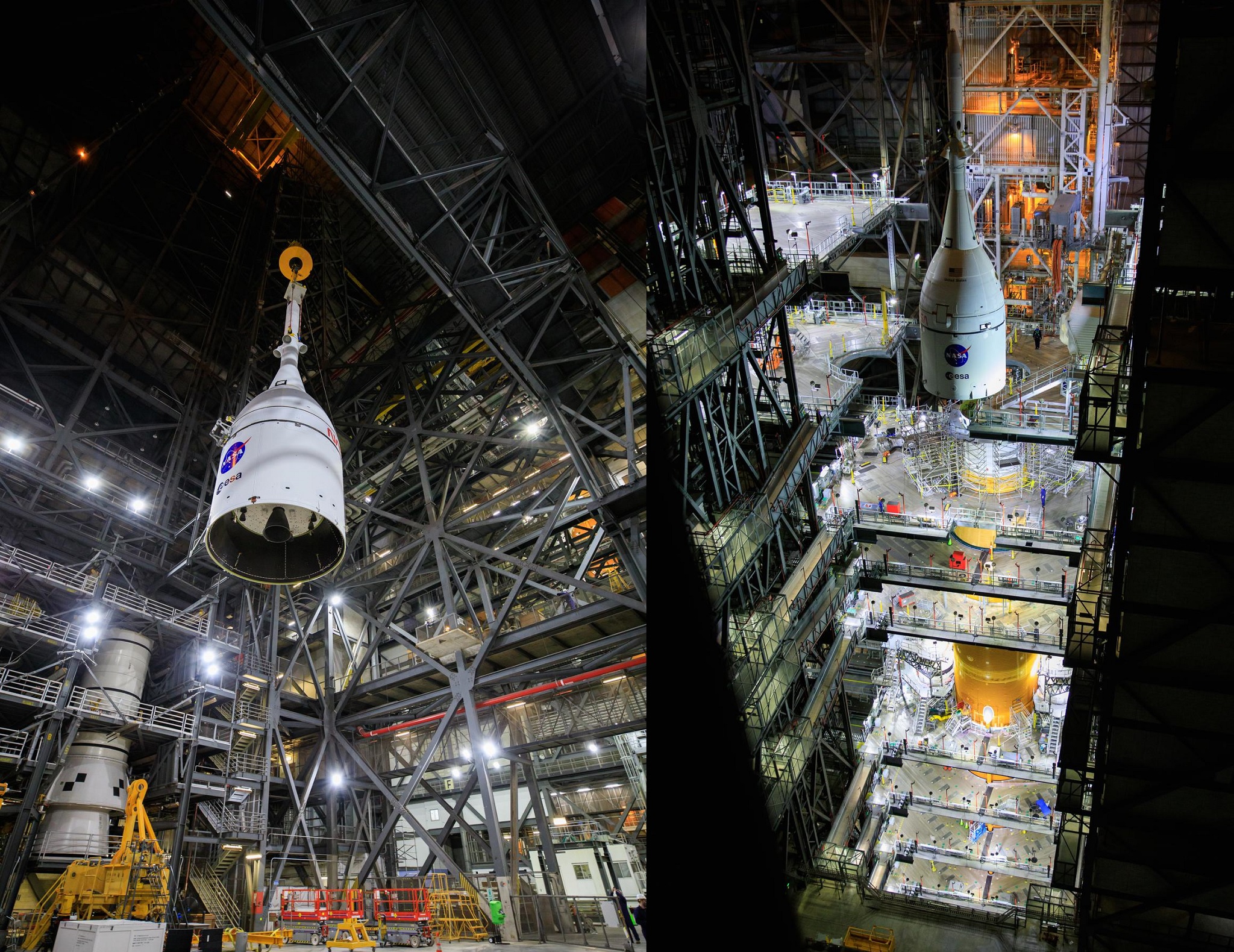 (Photo Caption: Using a custom lift fixture, one of the 325-ton capacity cranes in the VAB lifts the Orion launch stack above the High Bay 4 floor (left) and then across the upper reaches of the VAB towards the SLS stacked in High Bay 3. The Orion Main Engine, a repurposed Space Shuttle Orbital Maneuvering System engine, and two of the four pairs of Auxiliary engines get a last look in the left image before encapsulation for launch.)

The final assembly of the vehicle was a major milestone ahead of the uncrewed Artemis 1 test flight. The boosters and stages of the SLS will place Orion on a trans-lunar trajectory that will pass approximately 100 kilometers above the lunar surface, where Orion will use the flyby to assist in inserting itself into a Distant Retrograde Orbit (DRO) trajectory around the Moon.

Depending on how much time Orion spends in the cislunar DRO, Artemis 1 could last approximately four to six weeks to time its splashdown at the end of the mission during daylight.

Orion arrived in the LASF on July 10 for final launch integration with the inert Launch Abort System for this mission. The LAS tower was stacked on top of the Crew Module in late July. While the initial round of interface checkouts and special tests were conducted on the SLS in September, the EGS and Jacobs Spacecraft and Offline Operations team completed integration of the Orion launch stack in the LASF.

The Orion spacecraft is largely shrouded within a specialized launch fairing, which has separate parts for the Service Module and the Crew Module. Orion’s LAS includes the launch fairing for the Crew Module, which provides environmental protection from ascent heating along with streamlining to protect against aerodynamic drag early in launch.

Spacecraft Adapter Jettison (SAJ) fairings around the Service Module were installed while the spacecraft was still in the Armstrong Operations and Checkout Building at KSC. The two sets of fairings will be jettisoned separately during ascent after the Artemis 1 vehicle climbs out of the lower atmosphere.

Although the LAS for Artemis 1 is inert for the uncrewed test flight, the ogive-shaped fairings over the Crew Module are designed to work with the LAS abort motors in case of emergencies during future crewed launches. After the LAS tower was stacked on top of the Crew Module in the LASF, the ogive panels were put in place before hundreds of fasteners were used to connect the panels. Spring bumpers and tangential fittings were also installed to complete the ogive fairing assembly. 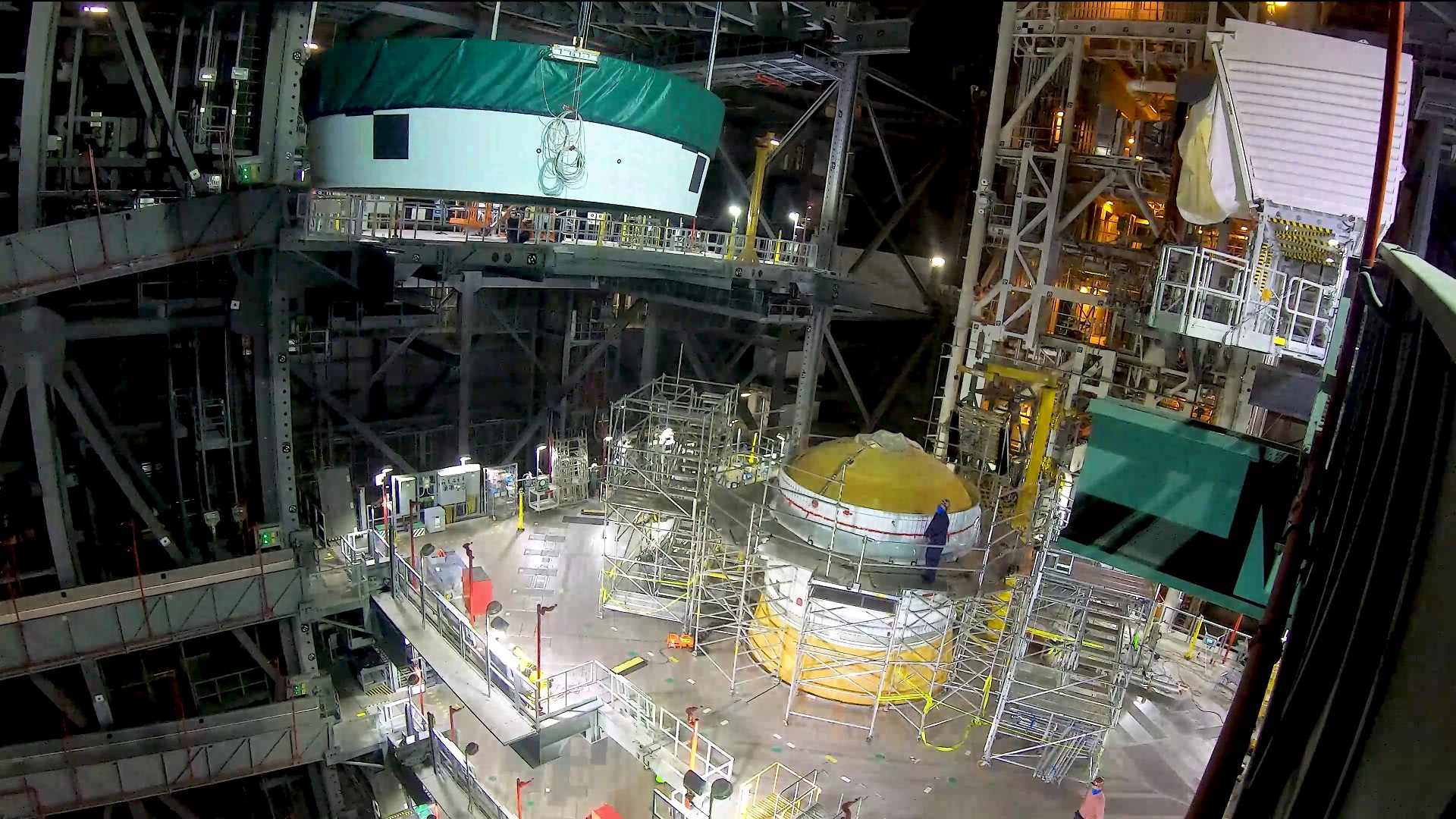 (Photo Caption: With a green cover on top, the flight article Orion Stage Adapter for Artemis 1 is moved by crane towards the top of the ICPS in October where it was mated. The OSA carries dispensers that will deploy 10 CubeSats during the ride on top of the ICPS from the Earth to the Moon.)

Functional testing of the Orion side hatch, the hatch on the LAS, and the linkages between the two were then performed in parallel with final thermal protection system (TPS) closeouts. After structural leak checks, the Orion launch stack — which includes the Crew and Service Modules, the LAS on top, the Spacecraft Adapter on the bottom, and the SAJ fairings around the Service Module — was ready for launch integration with SLS.

That connection to SLS is provided by the Orion Stage Adapter (OSA) that connects the rocket to its primary customer payload. The OSA is also the launch home for Artemis 1’s 10 secondary CubeSats that will ride along with Orion and the ICPS second stage to the Moon.

After staying in a holding area in the Multi-Payload Processing Facility since late July, the OSA, with its 10 CubeSats, was transported to VAB High Bay 4 on October 4. Thirteen CubeSats were manifested deployment slots in the OSA, but logistics, development, and pandemic issues prevented three payloads from being completed soon enough to fly.

The OSA and payloads waited for the first round of SLS and ground systems testing in the VAB to be completed, including data for the Integrated Modal Test ahead of late stowage and final battery charging.

One of the VAB cranes was attached to a special lift fixture which lifted the OSA off the floor of High Bay 4 overnight on October 8 into October 9, taking the connector/adapter up and over the Transfer Aisle and into the SLS integration cell in High Bay 3.

After it was placed on top of the ICPS, the adapter was permanently bolted to the top of the SLS second stage. Following launch, Orion will leave its Spacecraft Adapter behind with the OSA and the ICPS when it separates to start its cislunar mission.

Completion of the Integrated Modal Test (IMT) on September 28 was also a notable milestone in the Artemis 1 schedule, capping off the first part of integrated testing. The first interface verification test between the SLS vehicle and ground systems was completed in August and was followed by two, special development tests. The Umbilical Release and Retract Test in mid-September was a verification and validation test for EGS, and the IMT was a similar test for the SLS Program.