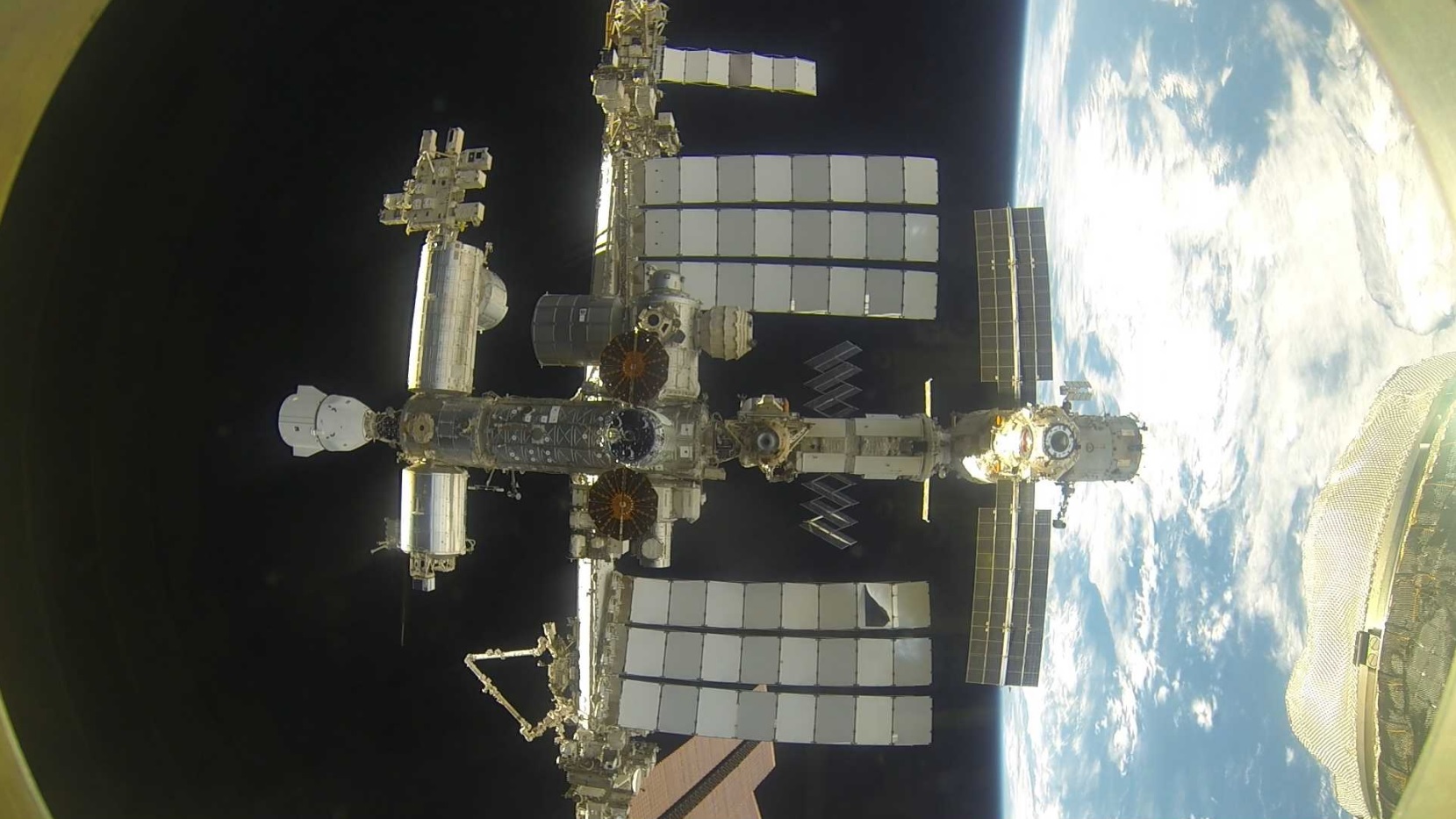 Cosmonaut Oleg Novitsky and spaceflight participants Yulia Peresild and Klim Shipenko will return to Earth with a landing in Kazakhstan on Sunday, completing the Soyuz MS-18 mission.

The three-person landing crew is scheduled to undock from the nadir port on the Nauka Multipurpose Laboratory Module (MLM) at 01:13 UTC. Landing is scheduled for 04:36 UTC.

Soyuz MS-18 launched and arrived at the International Space Station (ISS) on April 9 with cosmonauts Oleg Novitsky and Pyotr Dubrov, as well as NASA astronaut Mark Vande Hei. On September 28, the spacecraft was manually relocated from the nadir port on Rassvet to the nadir port on Nauka.

With the conclusion of this Soyuz mission, Novitsky will have completed his third spaceflight.

For me, the 65th expedition to the International @Space_Station is the most intense in all three orbital flights.

Today, I want to share with you the footage of the re-docking of the #SoyuzMS18 spacecraft from the Rassvet module to the #Nauka module. pic.twitter.com/VAqUJPMT8w

Dubrov and Vande Hai will land aboard Soyuz MS-19 in March, as their seats will be occupied by Peresild and Shipenko for the return. The last Soyuz spacecraft to have a different landing crew than launch was Soyuz MS-15, with Roscosmos cosmonaut Oleg Skripochka and NASA astronauts Jessica Meir and Andrew Morgan.

Peresild and Shipenko arrived at the ISS on October 5 along with Roscosmos cosmonaut Anton Skaplerov on Soyuz MS-19. Both Peresild and Shipenko have made the trip to the station as spaceflight participants to film scenes for a future Russian movie called “The Challenge.”

For the film, Shipenko has the role of director, while Peresild is the lead actress. Scenes for the movie were filmed on both the Russian and international segments of the ISS, including the Cupola module.

After saying goodbye to the current crew on the ISS, Peresild, Shipenko, and Novitsky will enter Soyuz MS-18 and the hatches on both the Soyuz and Nauka will be closed. Then, the crew will get into their Sokol launch and entry suits and will wear them until after landing.

Novitsky, as the commander of the spacecraft, will then command the spacecraft to open the hooks located around the docking ring on the orbital module. These hooks are designed to keep the spacecraft and the station attached.

Springs will then push the Soyuz away from the station with a velocity change of around 0.12 m/s.

With the undocking of Soyuz MS-18, Expedition 66 will officially start on the station. French astronaut Thomas Pesquet of the European Space Agency (ESA) is currently the commander of the station.

Next, the spacecraft will reorient into a retrograde orientation. The deorbit burn lasting around 4 minutes and 45 seconds will occur, slowing the spacecraft to a suborbital trajectory.

The burn will be completed using the main engine located on the service module.

Around 30 minutes prior to landing in Kazakhstan, explosive bolts will fire to separate the orbital module and the service module from the descent module, where the crew is located. Both the orbital and service modules will burn up during reentry.

Flying on a northeast trajectory, the descent module will enter the plasma regime section of reentry at around 80 kilometers in altitude. At the same time, the crew enters a brief communications blackout.

The crew will regain communications with the ground at around 37 kilometers altitude.

At around 10 kilometers altitude, the parachute cover will jettison. This will begin a sequence of four parachutes to decelerate the spacecraft prior to landing. First, two pilot parachutes will deploy. This will be followed by the drogue parachute, and then the main. 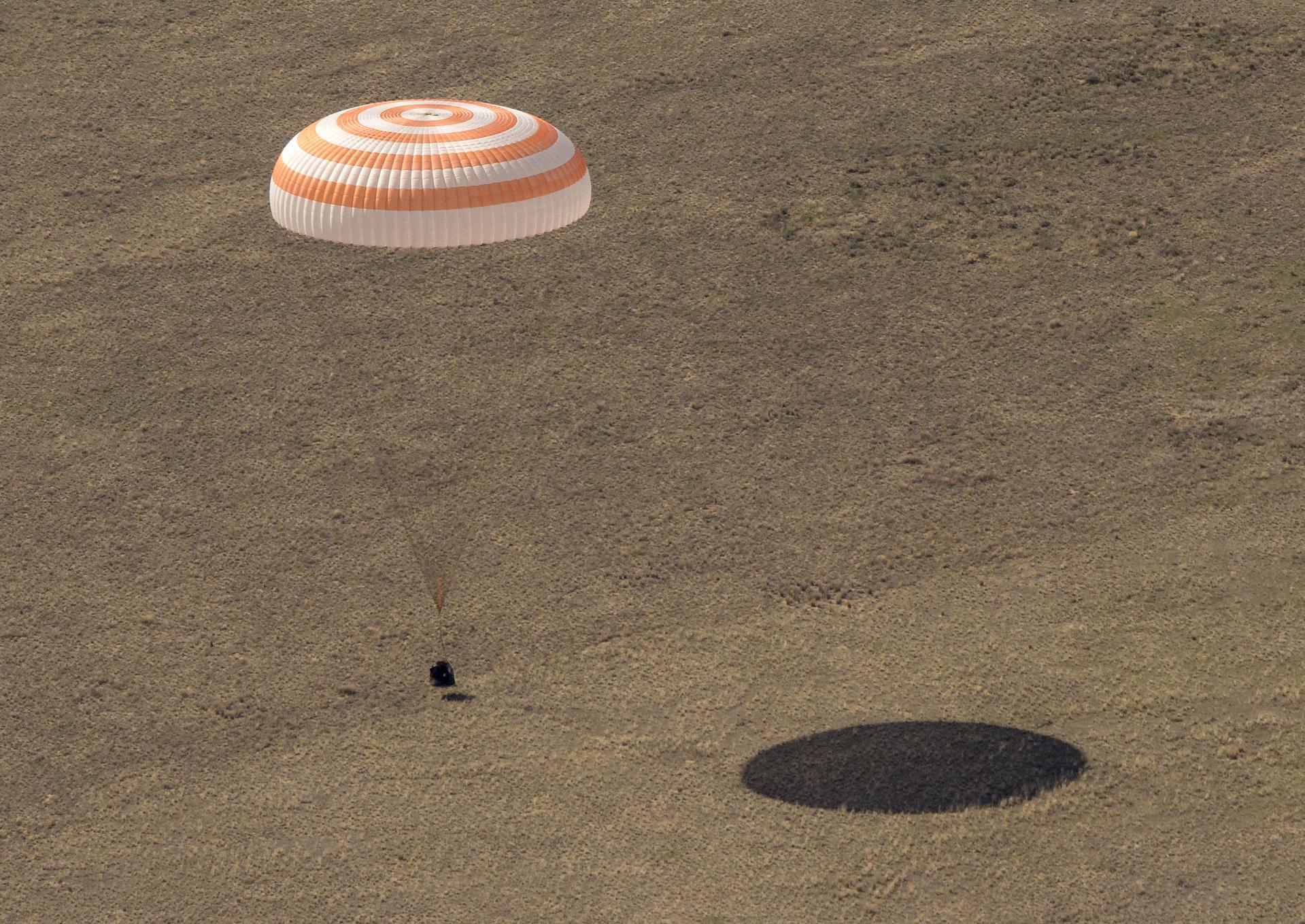 As the spacecraft nears the ground, the crew’s seats will automatically rise up to cushion the crew from the impact upon landing.

Soyuz MS-18 is scheduled to land 147 kilometers from the Kazakh city of Zhezkazgan. For the landing and recovery, military aircraft from Chelyabinsk and Sverdlovsk regions in Russia were relocated to airfields in Karaganda and Zhezkazgan, both located in the Republic of Kazakhstan. These included 10 Mi-8MTV-5 helicopters, two Antonov-12 aircraft, and one Antonov-26 aircraft.

Following Soyuz MS-18’s departure, the Progress MS-17 cargo spacecraft, currently docked to the Poisk module, is scheduled to relocate to the nadir port on Nauka on October 22. After Progress has been filled with trash, it will undock from Nauka in November, taking the Nauka docking adaptor along with it.

This will clear the port for the arrival of Progress M-UM with the new Pritchal module, which requires a different docking port than needed for standard Soyuz and Progress spacecraft.  Pritchal is scheduled to launch from Baikonur no earlier than November 24. The module is currently at the Baikonur Cosmodrome undergoing pre-launch processing.

(Lead image: The ISS as seen from Soyuz MS-18 during relocation in September. Credit: Roscosmos)

The post Soyuz MS-18 set for undocking and landing appeared first on NASASpaceFlight.com.