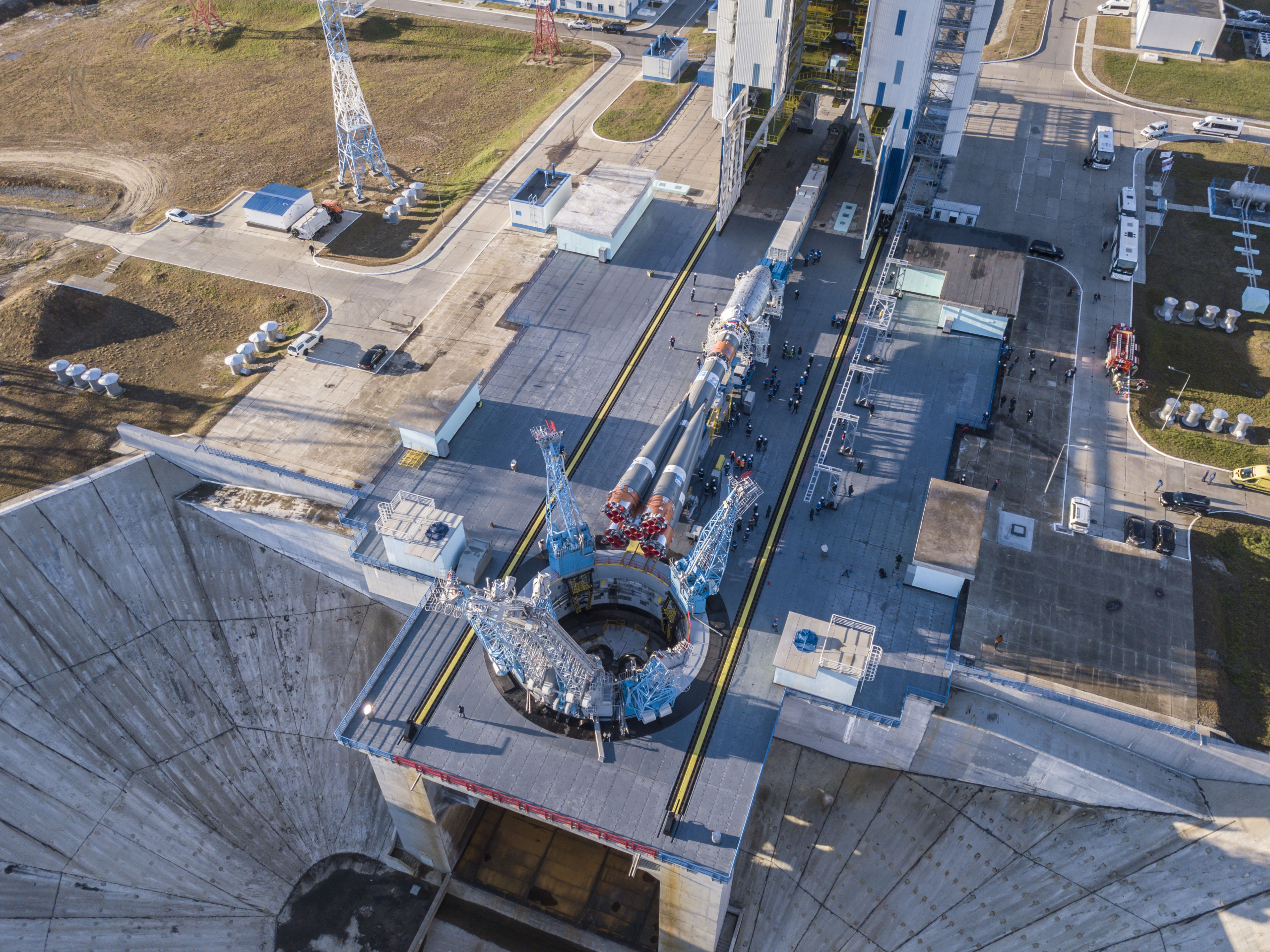 The initial deployment of OneWeb’s satellite broadband constellation will reach its halfway stage on Thursday with the launch of 36 more spacecraft aboard a Russian Soyuz 2.1b rocket. Liftoff from the Vostochny Cosmodrome in Eastern Russia is scheduled for 18:40 local time (09:40 UTC) on October 14.

Founded by American businessman Greg Wyler in 2012, OneWeb aims to provide high-speed satellite broadband with a large fleet of small satellites in low Earth orbit similar to SpaceX’s Starlink constellation. Unlike Starlink, OneWeb sees its primary customer base as business and government users.

Satellite internet services are seen as a way to bring high-speed connectivity to regions that cannot easily be served by terrestrial broadband – for example, remote rural locations where the infrastructure may not exist and would not be cost-effective to develop.

Traditional communications satellites operate in geostationary orbits, high above the Earth’s equator; however, this presents a difficulty for internet providers as the travel time to and from the satellites results in latency, a delay in the round trip time to request and load data – such as a web page – across the network. Placing satellites in lower orbits reduces this problem as signals do not have as far to travel, but this comes at the cost of needing more spacecraft to ensure continuous global coverage.

OneWeb’s satellites were developed in cooperation with Airbus Defence and Space, with a manufacturing facility set up close to Cape Canaveral in Florida to produce the hundreds of satellites needed over the lifetime of the constellation.

While the first 648 spacecraft will make up its initial constellation, OneWeb has committed to building at least 900 satellites. The additional units will serve as spares and replacements for any that might fail or reach the end of their operational lives.

Each OneWeb satellite has a mass of 147 kilograms and an expected design life of at least seven years. The constellation occupies a near-polar orbit with an altitude of 1,200 kilometers at an inclination of 87.4 degrees. Once fully deployed, the constellation will consist of 18 planes, with 36 satellites in each plane.

With funding secured, OneWeb exited the bankruptcy process in November and launches resumed the following month.

OneWeb is currently expecting to begin offering an initial commercial service in the Northern hemisphere by the end of the year.

OneWeb selected European launch provider Arianespace to carry out its initial launches, using the workhorse Russian Soyuz rocket which Arianespace markets to fill the gap between its heavy-lifting Ariane 5 and lighter Vega rockets. The agreement between OneWeb and Arianespace includes launches from three different sites – the Centre Spatial Guyanais in Kourou, French Guiana, the Baikonur Cosmodrome in Kazakhstan, and the Vostochny Cosmodrome in Russia’s far east.

Launches from Baikonur and Vostochny are subcontracted to Starsem, a partnership between Arianespace, the Russian space agency Roscosmos, and Soyuz manufacturer TsSKB Progress. Thursday’s launch is the 11th that Arianespace and Starsem have performed for OneWeb and will be the sixth from the Vostochny Cosmodrome. Of the other launches, four have flown from Baikonur and one from Kourou.

With 36 spacecraft aboard, the total payload mass for Thursday’s launch is 5,797 kg, which includes the satellites themselves as well as their mounting and deployment mechanisms. Soyuz will use a Fregat upper stage to deploy the OneWeb spacecraft into an orbit about 450 kilometers above the Earth, with the satellites using their electric propulsion systems to raise themselves into their operational orbits.

While Soyuz has been the launcher of choice for OneWeb’s early missions, the company is keeping its options open for future satellites after recently signing a letter of intent with the commercial arm of the Indian Space Research Organisation (ISRO) to place future satellites aboard India’s PSLV and GSLV Mk.III rockets. While the non-binding agreement does not commit OneWeb to launching their satellites with ISRO, it could pave the way for missions from India to begin as early as next year.

OneWeb has previously explored other providers, signing launch contracts and options with Blue Origin and Virgin Orbit for future missions on their New Glenn and LauncherOne rockets, respectively. Most of the contracts with Virgin have since been canceled, leading to a legal dispute between the two companies. OneWeb also secured a deal with Arianespace to fly its satellites on the maiden flight of the Ariane 6 rocket; however, this was later canceled as OneWeb reviewed its deployment plans in preparation to emerge from bankruptcy.

More pictures from the #Vostochny_Cosmodrome: the #Soyuz-2.1b with the #Fregat upper stage & 36 @OneWeb satellites are getting prepared for the upcoming launch! pic.twitter.com/U4mcUtWyQP

The Soyuz 2.1b/Fregat-M rocket for this mission is a four-stage version of the most powerful form of the Soyuz rocket. Soyuz is descended from a series of rockets that trace their lineage back to Sergei Korolev’s R-7 missile of the 1950s, although the current-generation Soyuz-2 rockets were introduced in 2004.

The Soyuz-2 family consists of three variants. The Soyuz 2.1a is a modernized version of the previous-generation Soyuz-U, incorporating upgraded engines, digital flight control systems, and other enhancements. The Soyuz 2.1b offers increased performance through a redesign of the third stage, including a new RD-0124 engine. The third variant is the smaller Soyuz 2.1v, designed to carry lighter payloads.

The three stages of the Soyuz 2.1b burn RG-1 kerosene propellant and liquid oxygen. The first stage consists of four boosters clustered around the core – or second – stage. The third stage is mounted atop the second stage, with the OneWeb satellites – as well as the Fregat upper stage – enclosed within the payload fairing at the nose of the vehicle.

The restartable Fregat upper stage was developed from the propulsion system of the Fobos probes that the Soviet Union sent to the Martian moon Phobos in the late 1980s and is frequently used as an upper stage on Soyuz to enable the delivery of satellites into higher, more precise or more complex orbits than would be possible with just the Soyuz vehicle itself.

Fregat burns hypergolic unsymmetrical dimethylhydrazine and dinitrogen tetroxide and can make up to 20 burns in the course of a single mission. 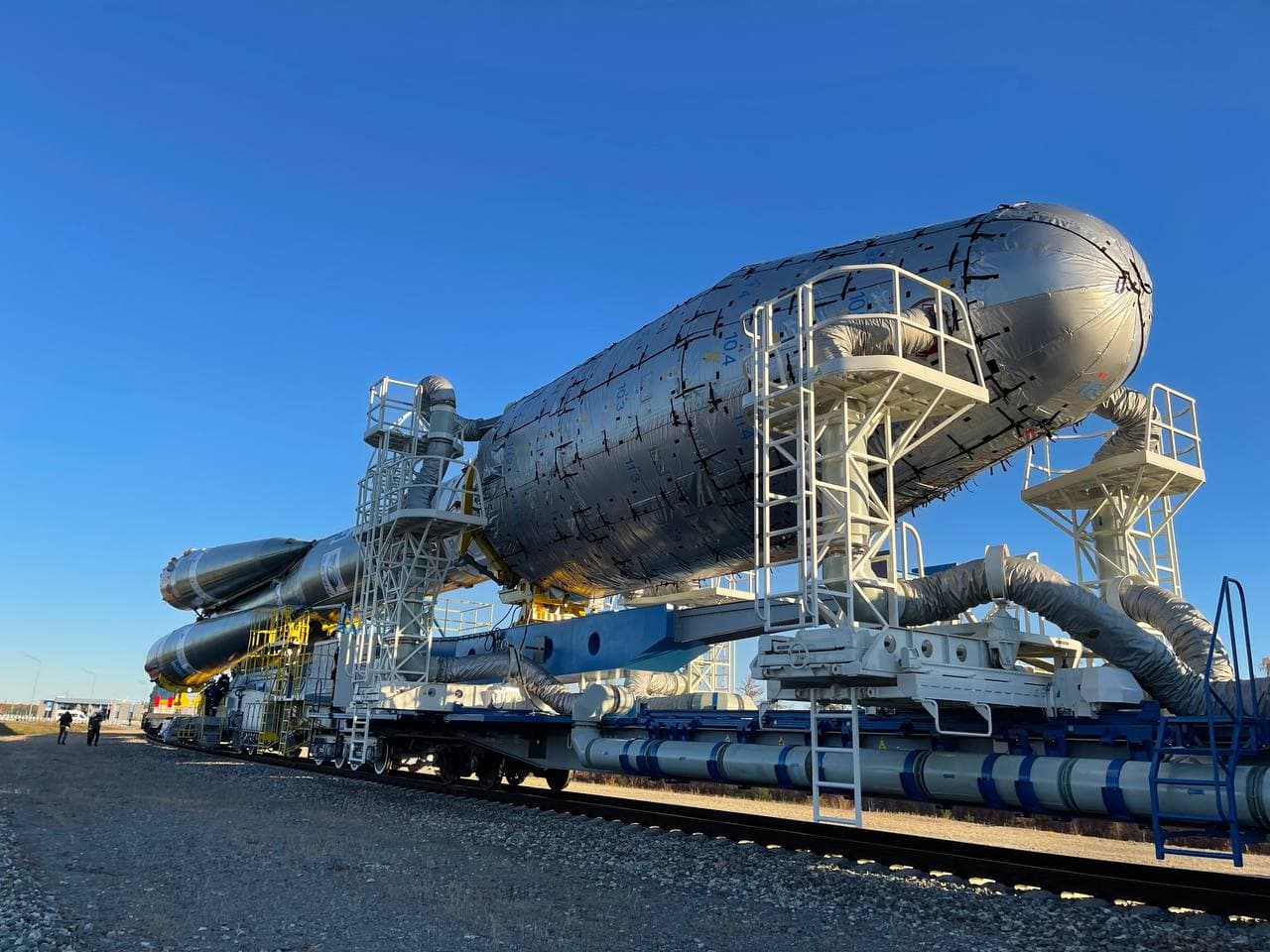 The Soyuz for the OneWeb 11 mission is rolled to the launch pad. (Credit: Roscosmos)

Thursday’s launch will use a Soyuz rocket with serial number X15000-009 on a flight designated ST36 by Arianespace and Starsem. The mission will last three hours 51 minutes 40 seconds from liftoff until the final satellite separates.

The flight will begin from the Vostochny Cosmodrome, Russia’s newest launch site having supported its first launch in April 2016. Located in Russia’s eastern Amur Oblast, it was built on the site of the former Svobodny missile base which had previously hosted a small number of orbital launches with the solid-fueled Start rocket.

Vostochny currently has launch facilities for Soyuz rockets, with an Angara launch complex under construction. The Soyuz complex at Vostochny is designated Pad 1S.

Soyuz rolled to the launch pad on Monday in preparation for the OneWeb mission. The final countdown began about nine hours before liftoff with system checkouts on the rocket and ground infrastructure before operations proceeded into fueling four and a half hours ahead of launch.

For Soyuz, the final startup sequence will see the first and second stage engines ignite at the T-16 second mark. Each of the four first stage boosters is powered by a single RD-107A engine while the second stage is powered by an RD-108A that incorporates four vernier nozzles for control of the rocket’s attitude.

Once a good burn in all combustion chambers is confirmed, a signal will be sent to take the engines to full thrust at T-4 seconds, followed shortly thereafter by liftoff.

For the first 117 seconds of the flight, the first and second stage engines will fire together to propel Soyuz through the dense lower regions of Earth’s atmosphere. Once the first stage has consumed its propellant, it will shut down and separate – with the four boosters being pushed away from the second stage by venting residual oxygen from their noses. On a clear day, the “cross of Korolev” – named after the rocket’s chief designer – can be seen as the boosters fall away from the still-burning second stage. 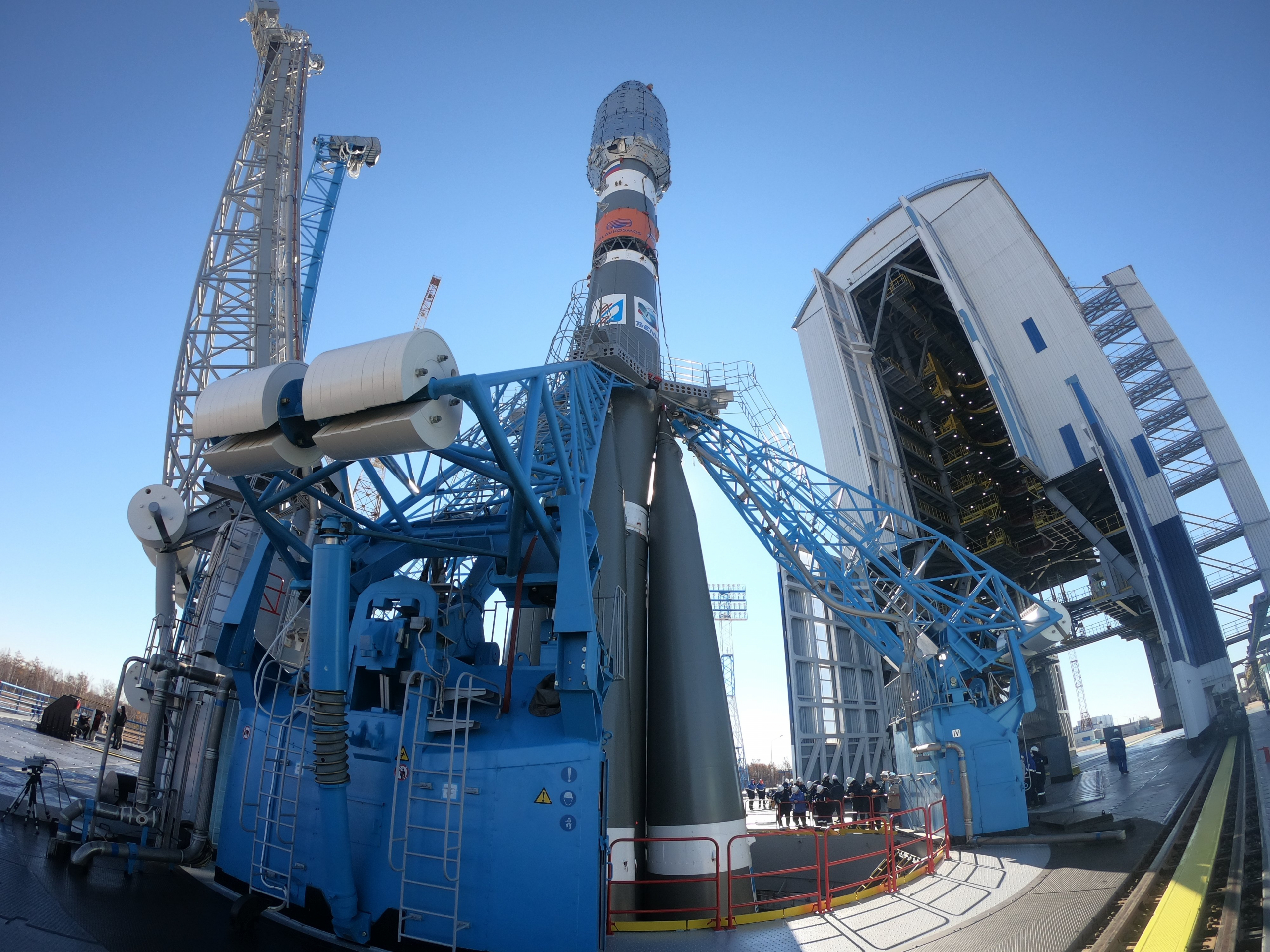 Soyuz and OneWeb 11 stand on the launch pad. (Credit: Roscosmos)

Once the rocket crosses out of the aerodynamically sensitive portion of the flight, the payload fairing is no longer needed and will separate at about T+3 minutes 35 seconds. The second stage will continue to fire until T+4 minutes 46 seconds when the next stage separation event will take place.

The first burn of the Fregat upper stage’s S5.92 engine will begin at T+9 minutes 22 seconds and last for about five minutes. Just under an hour later, Fregat will fire again for another short burn that will circularize its orbit, setting up for the deployment of the OneWeb satellites.

The satellites will separate in nine groups of four, with a gap of just over 19 minutes between each separation event. The first four satellites will separate one hour and 18 minutes after launch, with the final four separating at the three-hour 51-minute 40-second mark. After deploying its payloads, Fregat will make another short engine burn to deorbit itself, concluding the mission.

Thursday’s launch is expected to be the last OneWeb mission of the year, ending a streak of seven launches over the last six and a half months. The next OneWeb mission had been expected in late December but has slipped to 2022.