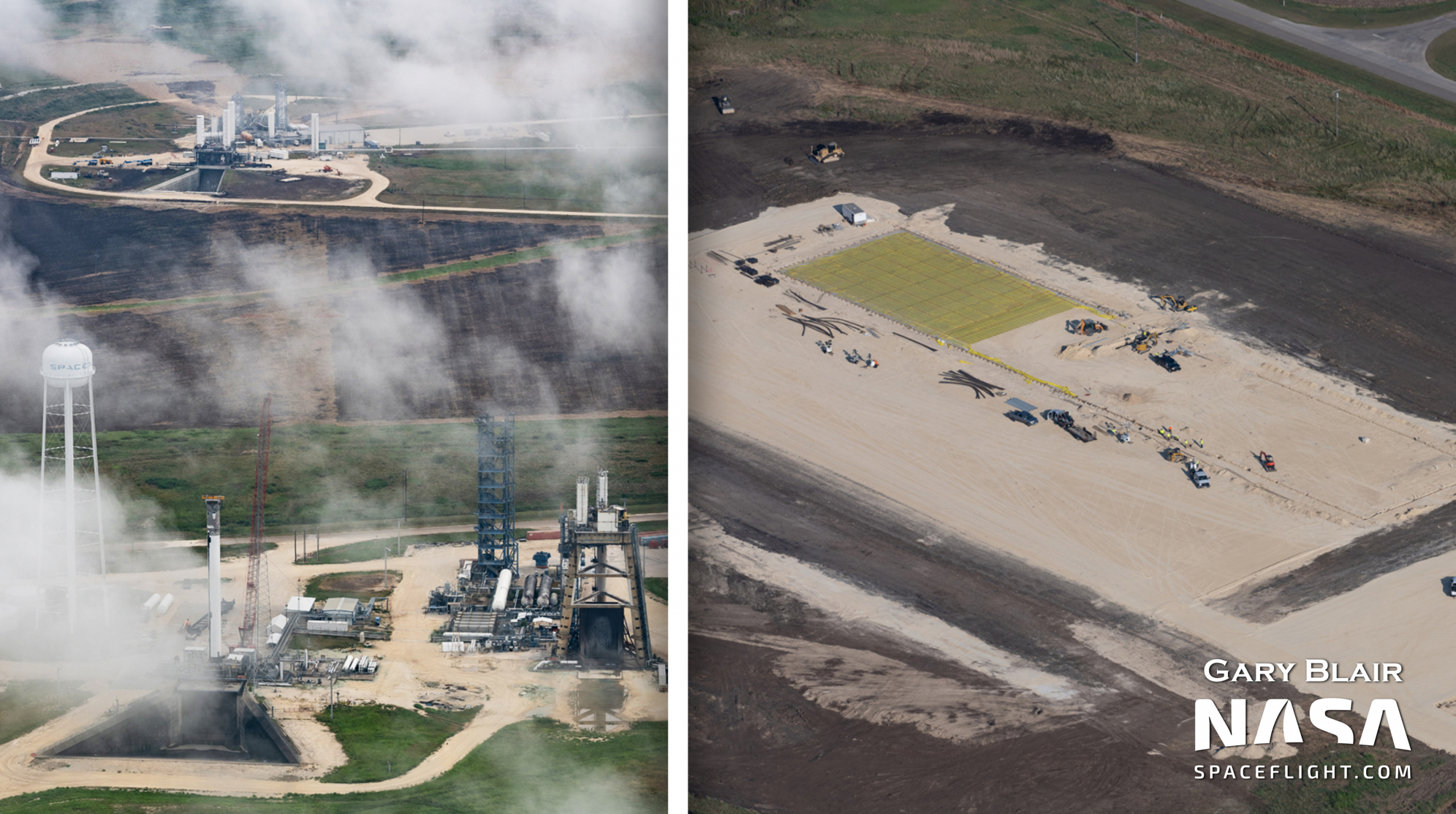 SpaceX’s engine testing facility on 4,300 acres of land in McGregor, Texas, just south of the city of Waco, is undergoing new development and testing related to the Raptor engine for Starship and Super Heavy.

With five test bays, the facility will soon become a hub for Raptor 2 engine assembly, with a new factory now under construction. This is taking place as Merlin engine and stage testing related to upcoming Falcon 9 and Falcon Heavy flights continues.

The McGregor facility, originally the location of the Bluebonnet Ordnance Plant, was used during World War 2 to manufacture bombs. After the war, parts of the facility were used to make housewares, until Phillips Petroleum came along, starting JATO bottle and ammonium nitrate production. Later, Rocketdyne and Hercules Corporation would use the premises to make propellant for Sidewinders and other missiles.

The facility was cleaned up of ammonium perchlorate contamination in the mid-1990s, and the city of McGregor acquired 3,500 acres out of the original 9,600 acres that the facility used. Beal Aerospace started using McGregor for testing its BA-810 engine, at the time the largest liquid engine tested since Apollo. However, Beal folded after three years of operation due to a collapsing satellite launch market and losing out on NASA funding.

SpaceX leased the facility from the city of McGregor and started operations there in 2003, a year after the company was founded by then-millionaire Elon Musk, who had cofounded PayPal before selling it to eBay. The Merlin 1A engine started tests in McGregor on March 11, 2003. After the 1A model was used for the first two Falcon 1 launches starting in 2006, attention turned to the improved Merlin 1C, and then the 1D for the Falcon 9 v1.1.

The facility expanded over the years, getting a large test stand known as the “Tripod” for Falcon 9 first stage test firings as well as other testing infrastructure such as a stand to test second stages. The facility branched out into flight testing, and flights of the “Grasshopper” rocket started in 2012.

The Grasshopper rocket was a prototype based on the Falcon 9 first stage with a single Merlin engine and fixed landing gear to test hovering and vertical landing, as part of Elon Musk’s effort to make the Falcon 9 fully and rapidly reusable. The Grasshopper’s flights became well known due to the “rocket cows,” cattle that were first startled by these launches, then got used to them.

After eight successful test flights, the Grasshopper was retired in 2013 and a newer vehicle known as F9R Dev1 with three Merlin engines took flight in the spring of 2014 from the same site. However, on August 22, 2014, the F9R was lost during a test flight when it exploded, and the city of McGregor prohibited any future flight tests from the facility.

This was part of a set of restrictions agreed to by SpaceX to regulate noise and vibration from testing. Reusability testing was shifted to maneuvers during Falcon 9 launches from Florida or California after stage separation, while Falcon 9 first stages continued to be ground tested at McGregor before being shipped to the launch site.

Around this time, Elon Musk and SpaceX announced what was initially known as the BFR (Big Falcon Rocket), as well as a new methane and liquid oxygen-fueled engine known as Raptor. The new engine would power this rocket and its associated second stage, then known as BFS (Big Falcon Ship). The initial design evolved over the years to become the Super Heavy rocket and Starship reusable spacecraft.

Since September 2016, the Raptor engine to be used on the Starship spacecraft and Super Heavy booster has undergone test firings at McGregor. The engines, which have been upgraded over time, are currently built at SpaceX’s main factory in Hawthorne, California, then transported to McGregor for testing. Flight units meant for the Starship program are currently tested at McGregor before being driven to the Starbase launch facility in Boca Chica near Brownsville, Texas. 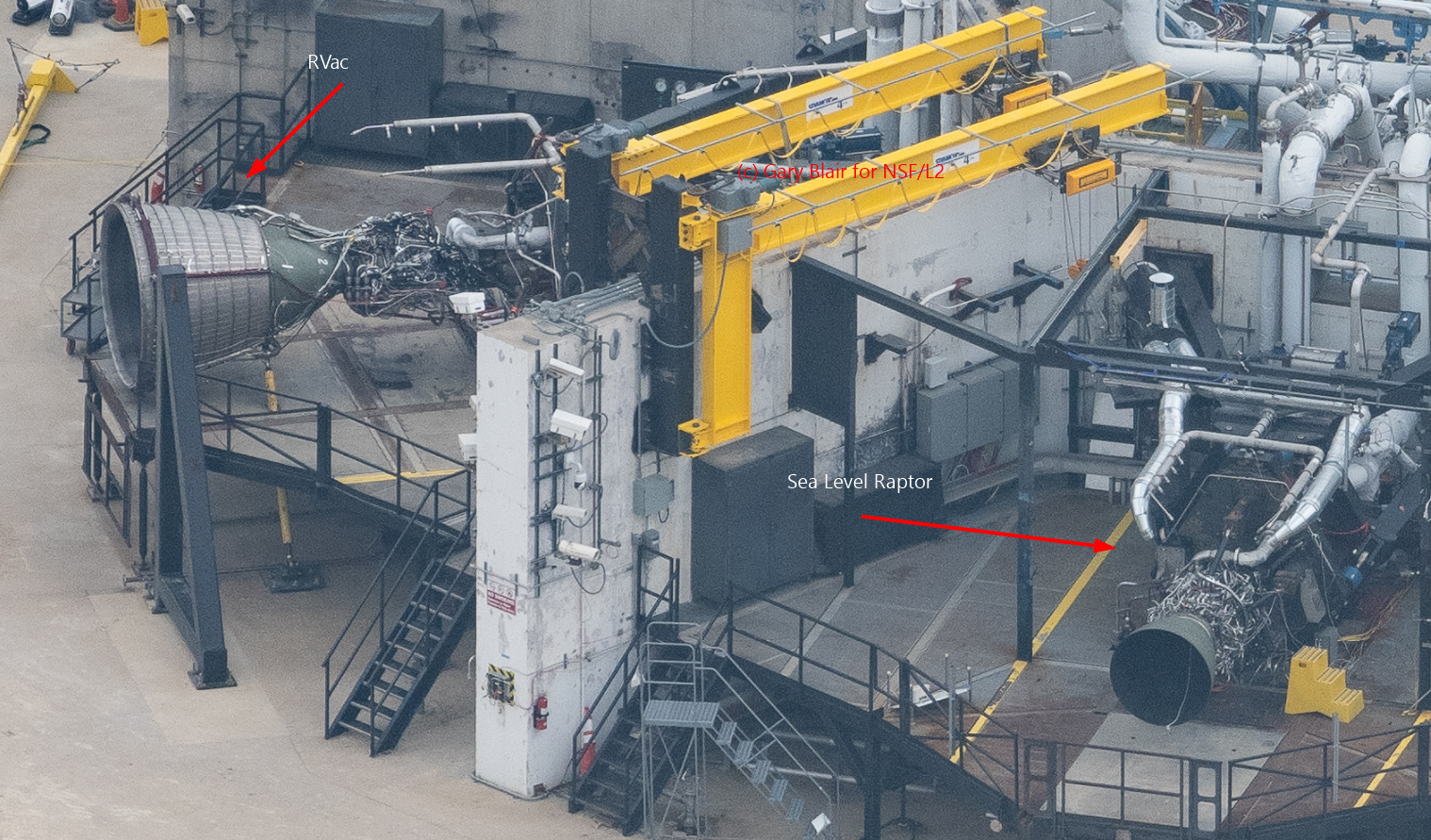 However, Elon Musk has recently announced that a new production plant will be built near the McGregor engine testing facility. This plant will specifically produce Raptor 2 engines optimized for firing at sea level, most of which will be used on Super Heavy boosters. The Raptor 2 is a future version of the engine soon to enter testing, and the factory will be capable of making 2 to 4 of these engines per day.

This production rate is higher than a typical rocket factory, but low compared to an automobile factory. As Elon stated in a tweet: “It [the factory] will be the highest output & most advanced rocket engine factory in the world.” He believes it will be needed to support high-cadence Super Heavy operations, including many flights to Mars related to the build-out of the planned Martian city.

The Raptor Vacuum engines with larger vacuum-optimized nozzles (for use in space and high altitudes) that will only be used on Starship will still be built in Hawthorne, which will also work on unspecified experimental designs.

The McGregor facility also now has a new test stand for Raptors that will allow up to one test firing per day, possibly up to two per day, of the sea-level engines, the same type of engine used on the Super Heavy booster as well as the center engines on the Starship. Construction of the new vertical stand was started in January and finished in May before an initial 15-second test firing. 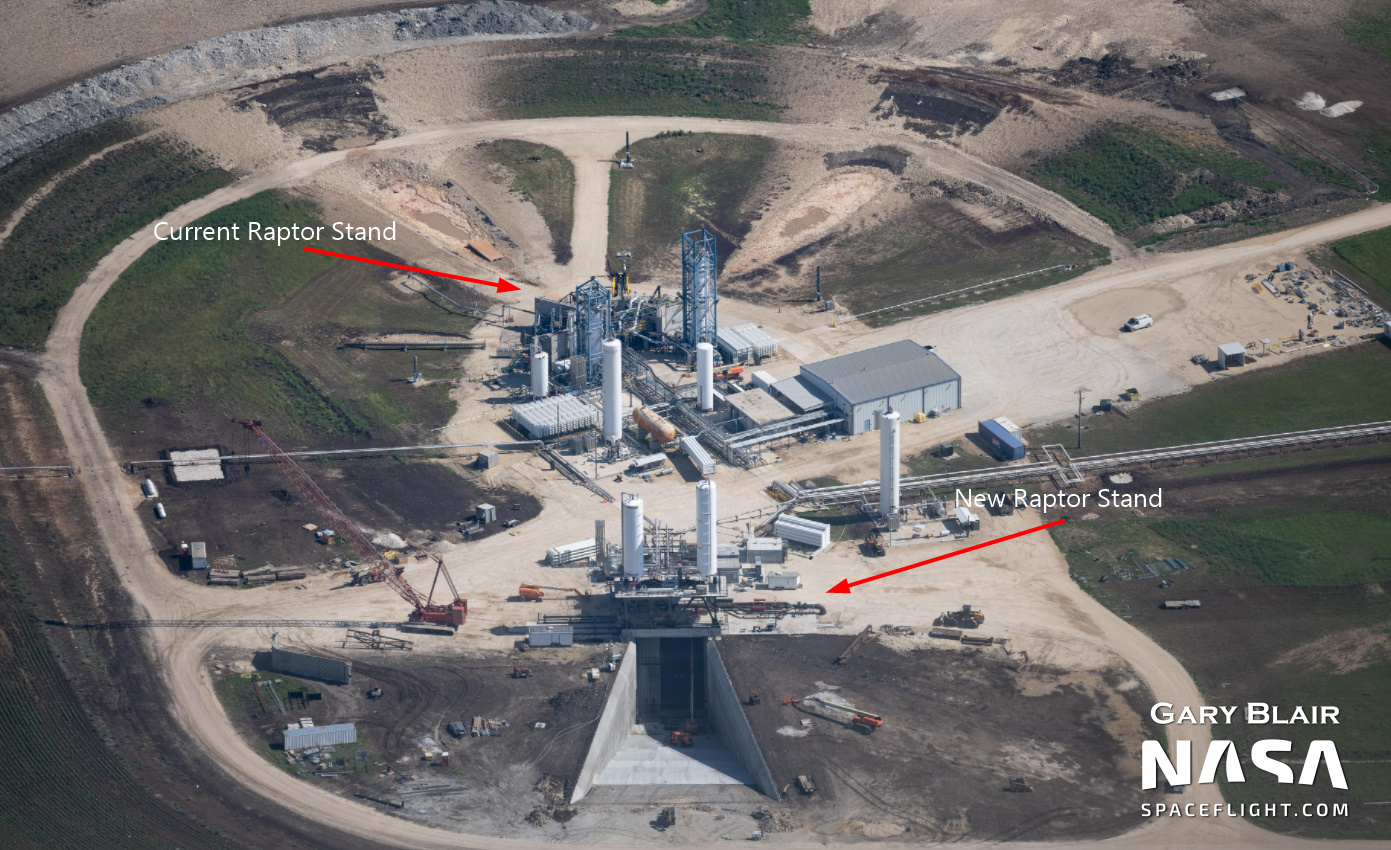 The “Tripod” is still in use as well, after being converted for testing Raptor engines. Falcon 9 first stage tests are now done in a partially underground stand to reduce noise and support greater thrust than the version 1.1 Falcon 9’s. The three test stands and five engine bays for Raptor support an increased pace of engine testing, which will be needed for Super Heavy operations, as that booster will use up to 33 sea-level engines.

While engine testing has continued apace, the new sea-level Raptor assembly plant has started foundation work, with groundbreaking taking place and work on the superstructure expected to be finished by the end of the year. There is a push to get this plant finished in time to support Starship/Super Heavy flight testing and initial operations. 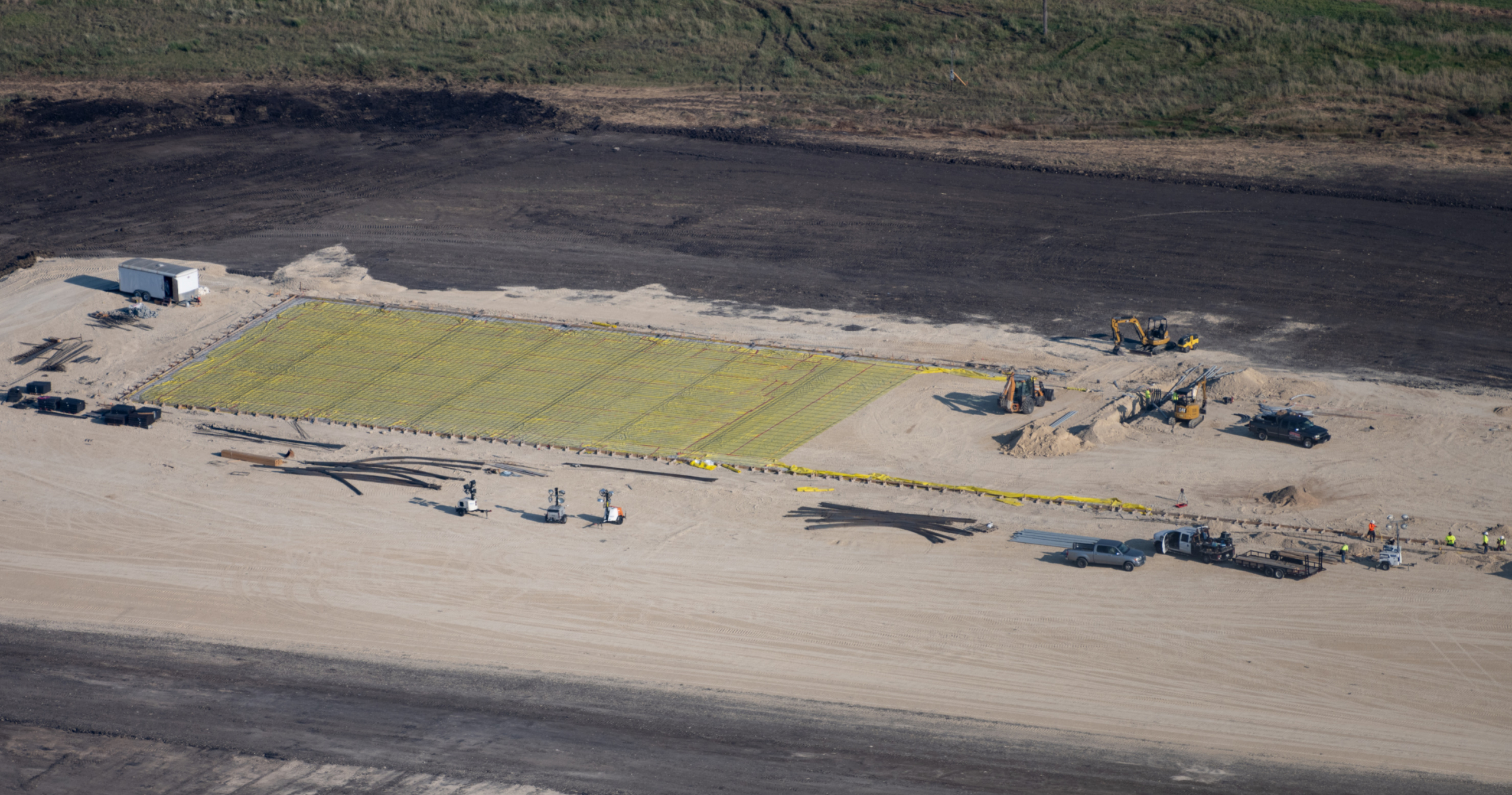 There is also a test stand for Starship RCS (reaction control system) hot gas jets. These would have been used to control the vehicle in flight while it is positioning itself for boostback burns and other procedures.

However, the hot gas RCS jets – though tests have been performed – won’t be used now, as engine gimbaling and cold gas jets will be used for the time being. The RCS stand is in addition to Raptor and Merlin test stands, test stands for Falcon 9 cores, Falcon Heavy cores, side boosters, and second stages for the Falcon 9/Falcon Heavy.

The test stands used for Falcon 9/Falcon Heavy core stages and their associated Merlin engines are still going strong, used for continuing tests on individual Merlin units as well as cores and side boosters. These include the ones that will be used for the Viasat-3 Falcon Heavy launch next year, which have been seen at McGregor recently.

Every Falcon 9 and Falcon Heavy stage, including second stages, still goes through McGregor for testing before reaching the launch pads in Florida or California.

Local leaders are enthusiastic about the jobs and tax dollars that the SpaceX facility and the new rocket factory are bringing. The current McGregor facility employs 500 workers, and many more would likely be needed for the new factory. 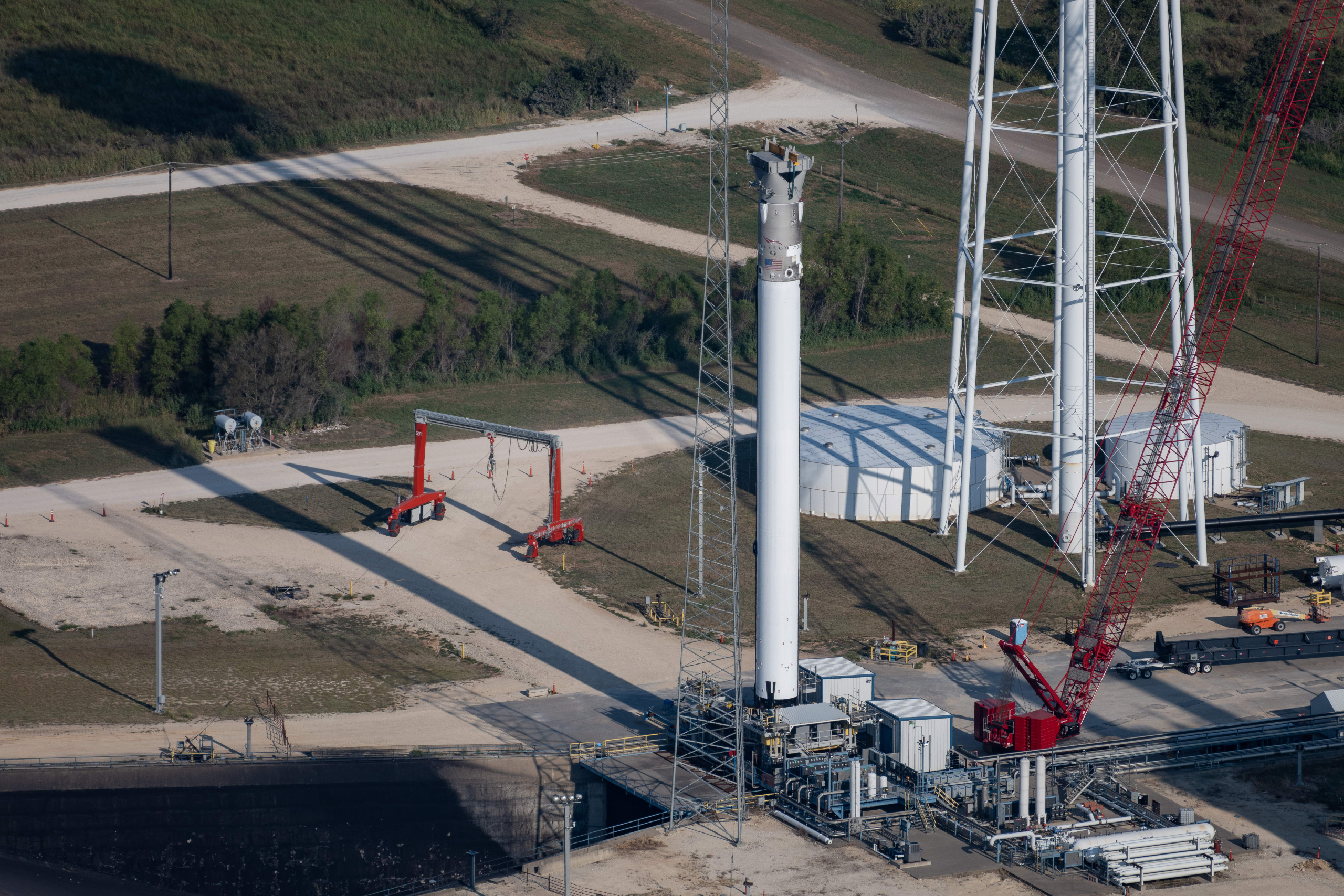 B1068, the Falcon Heavy center core for the Viasat-3 mission, on the test stand at McGregor. Credit: Gary Blair for NSF/L2

The continued testing at McGregor will support the Falcon 9 and Falcon Heavy manifests as long as the vehicles fly – which is expected to be the rest of the decade, if not longer.

Testing activities will also support future Starship missions such as Starlink 2.0 flights, Yusaku Maezawa’s Dear Moon crewed lunar mission, the two demonstration HLS missions to the Moon on Lunar Starship, and Starship missions to build out Elon Musk’s planned city on Mars — which could be home to up to a million people by 2050.