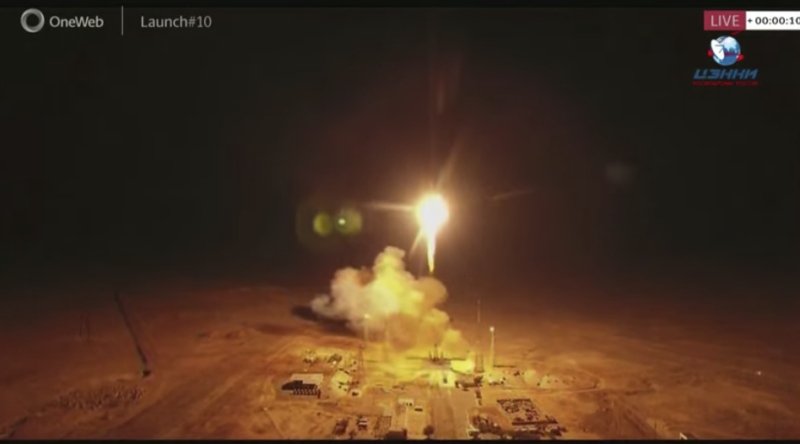 Arianespace launches 34 satellites for OneWeb on Sept. 14. Screenshot via Arianespace

A Soyuz rocket operated by Arianespace and its Starsem affiliate took off from the Baikonur Cosmodrome in Kazakhstan at 2:07 EDT. The mission is set to last three hours and 45 minutes, with the first separation of two satellites, followed by eight separations of four satellites.

The launch was significant for Arianespace as it marked the launcher’s 1,000th satellite launched to orbit, and the 60th Soyuz mission.

This mission brings OneWeb’s constellation to 322 satellites in Low-Earth Orbit (LEO). OneWeb is building a constellation to deliver high-speed, low-latency connectivity services to customers in sectors including aviation, maritime, backhaul services, as well as governments and emergency response services.

CEO Neil Masterson said last week at SATELLITE 2021 that by the end of November, OneWeb will begin servicing customers 50 degrees North to the North Pole and will provide global coverage by the end of next year.

Separately on Tuesday, OneWeb announced a distribution partnership with Peraton to provide OneWeb connectivity to its law enforcement, defense, and national, state and local government customers. “The capabilities offered by OneWeb’s satellite network complement Peraton’s existing satellite and terrestrial services,” said Mike King, Peraton’s chief growth officer. “We are now positioned to provide a more comprehensive suite of communications capabilities with the flexibility to go wherever our customers’ missions take them.”