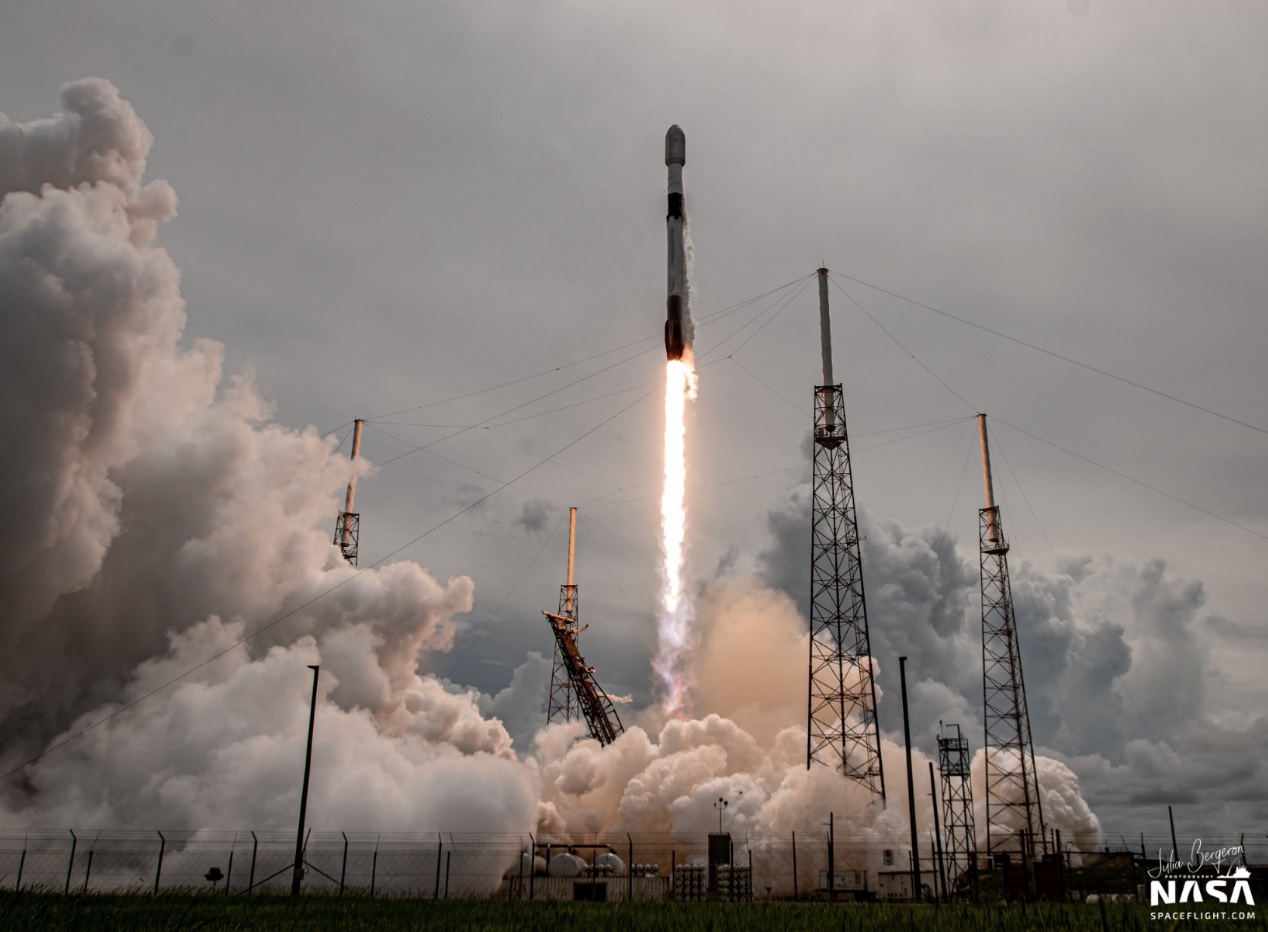 Spaceflight Inc has announced “GEO Pathfinder,” a rideshare mission to geostationary orbit that will use a lunar flyby. The mission will use a Sherpa EScape (Sherpa-ES) transfer vehicle, launched as a secondary payload with Intuitive Machines‘ IM-2 mission to the moon. The flight is scheduled for no earlier than Q4 2022 aboard a SpaceX Falcon 9 rocket.

Onboard Sherpa-ES will be a payload from GeoJump, a smallsat geostationary rideshare company, which will include an in-space fueling payload from Orbit Fab.

“This mission will demonstrate our complete mission toolbox and ability to execute complex, groundbreaking, and exciting missions beyond LEO,” said Grant Bonin, SVP of business development at Spaceflight. “Spaceflight will utilize a launch with a creative trajectory and our best-in-class propulsion system to slingshot around the Moon, allowing us to deliver payloads to GEO in an environmentally safe manner.

“We’re pleased to take Orbit Fab on this pathfinder mission and leverage the secondary payload capacity from Intuitive Machines. Spaceflight is committed to being the leading space transportation provider for Earth orbit and beyond, and this is an unprecedented example of delivering on that vision.”

“Offering rideshare missions to GEO is a real game-changer for the smallsat industry,” said Meagan Crawford, co-founder and managing partner at SpaceFund, an investor in GeoJump, Orbit Fab, and 17 other space startups. “When we presented the idea of accessing GEO via rideshare with Spaceflight to our portfolio companies — as early as 2022, the response was overwhelming. What used to be part of a long-term strategy for many of these companies is now a short-term reality.

“We couldn’t be more excited to partner with Spaceflight to push the boundaries beyond LEO for the industry while building tremendous value for our portfolio companies today.”

The IM-2 mission’s primary payload is a robotic Nova-C lander carrying 130 kilograms of payload towards a landing at the lunar south pole. Spaceflight Inc’s propulsive orbital transfer vehicle (OTV), Sherpa-ES, is a higher energy variant of the Sherpa-NG family. 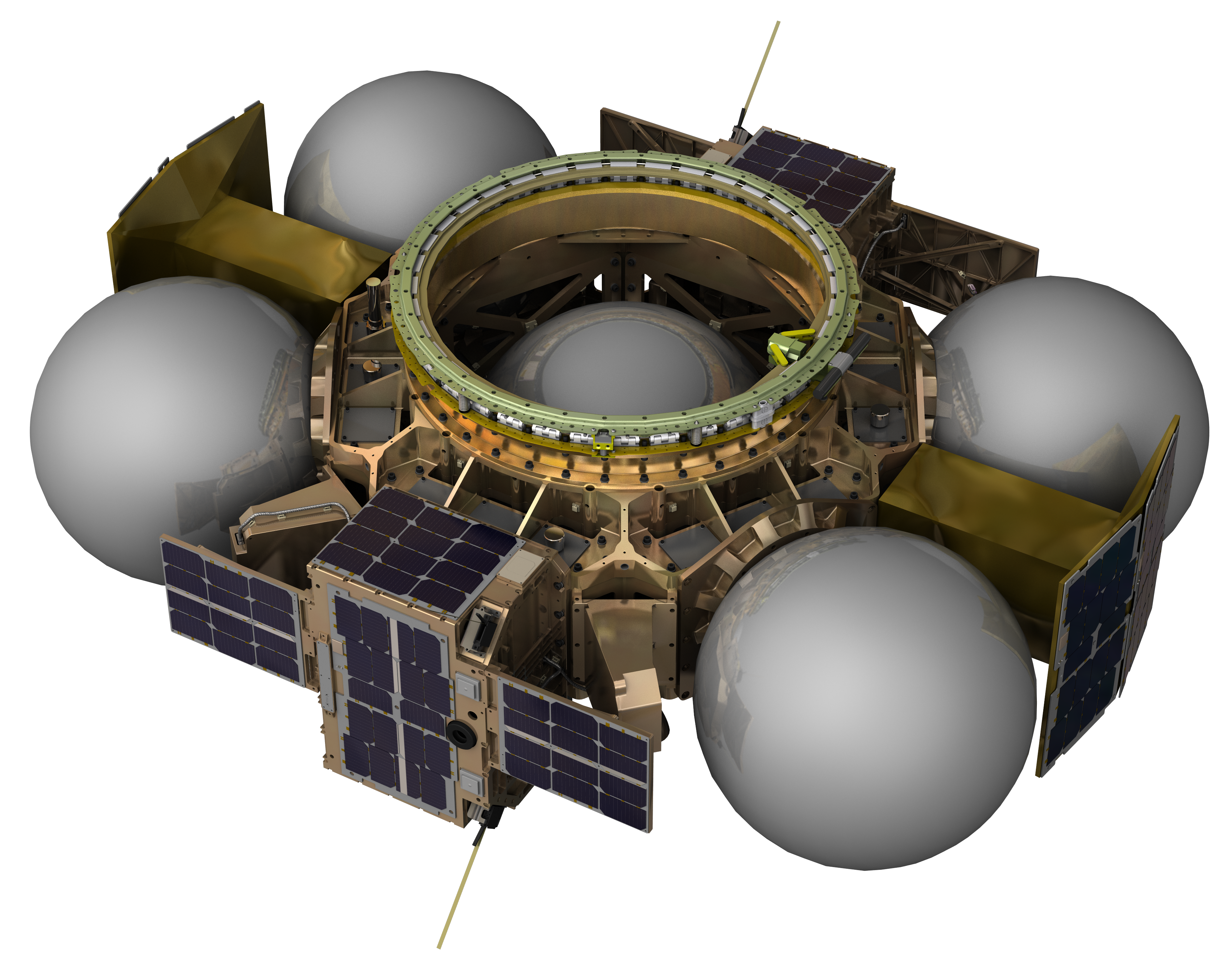 Render of the Sherpa-ES vehicle – via Spaceflight Inc

Sherpa-ES is a bipropellant OTV that offers high delta-V in order to deliver payloads to cislunar space, including trans-lunar and low lunar orbits, as well as geostationary orbit. The same modular structure of the Sherpa-NG family is used on Sherpa-ES, and the new OTV can also act as a platform for hosted payloads.

On the GEO Pathfinder mission, Sherpa-ES will conduct a lunar flyby before returning towards geostationary orbit, shortening the time to orbit to only 15 days and saving approximately 25% of the propellant needed for a traditional orbit raising flight profile. This trajectory also results in a relatively benign radiation environment, with only one pass through the Van Allen belt.

In a conversation with NASASpaceflight, Bonin gave some more details of Spaceflight’s mission and current activities.

After the upper stage of the Falcon 9 launch vehicle completes the Trans Lunar Injection (TLI) burn, the Nova-C lander will separate from the top of the payload stack. Then, Sherpa-ES and other rideshare payloads will separate from the rideshare adapter, which remains attached to the upper stage, in sequence. The other rideshare payload that has been announced for the IM-2 mission is a small communications satellite owned by Intuitive Machines that will be placed in lunar orbit. 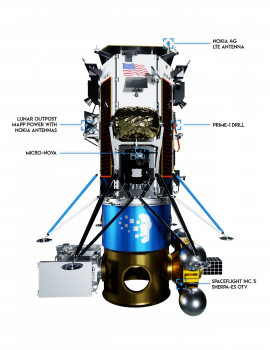 Render of the full IM-2 payload stack, including the Sherpa-ES OTV – via Spaceflight Inc

After a one-day commissioning phase, the Sherpa-ES will do a small course correction maneuver that will allow the use of the Moon’s gravity to adjust the Sherpa’s inclination to the Earth’s equatorial plane, at an altitude near GEO. A circularization maneuver is performed slightly above the GEO belt.

The Orbit Fab satellite is then dropped off slightly above GEO, ending the primary mission. Spaceflight will continue to operate the Sherpa to demonstrate long-duration operations while staying outside of the GEO belt.

GeoJump gives example values of 50 m/s for the course correction burn and 1.1 km/s for the circularization burn, passing about 9400km above the lunar surface.

Orbit Fab, the payload customer onboard GEO Pathfinder, launched their Tanker-001 Tenzing payload on the SpaceX Transporter-2 mission in cooperation with Spaceflight Inc. The company is now expanding beyond low Earth orbit with the GEO Pathfinder mission.

Bonin sees strong demand for this type of mission, possibly more than the currently available opportunities to ride along on Commercial Lunar Payload Services (CLPS) flights. Many types of payload could benefit from these relatively quick transits to GEO.

Several companies such as Astranis are working on a smaller class of GEO communications satellites that would benefit from not having to propel themselves from a typical GTO orbit. In addition to infrastructure and servicing missions from companies like Orbit Fab, Bonin also mentions space domain awareness as a market showing demand for this type of orbit.

Sherpa-NG is Spaceflight’s new family of OTVs that add systems to a common framework to provide several variants that differ in propulsive capabilities. These vehicles are sized to fit on an ESPA Grande port so that they can easily fit onto a rideshare launch.

Earlier concepts for propulsive Sherpas added propulsion to an entire ESPA ring, which results in a larger vehicle and requires some disassembly of the mission’s payload stack in order to be released. Bonin said that this new smaller design unlocks the utility of the OTV concept, enabling many different missions. If Spaceflight fills up the capacity of a Sherpa on a large rideshare mission, they can add another vehicle to handle the additional payloads.

So far in 2021, Spaceflight has launched three Sherpas, with the successful deployment of 50 customer satellites and hosted payloads. 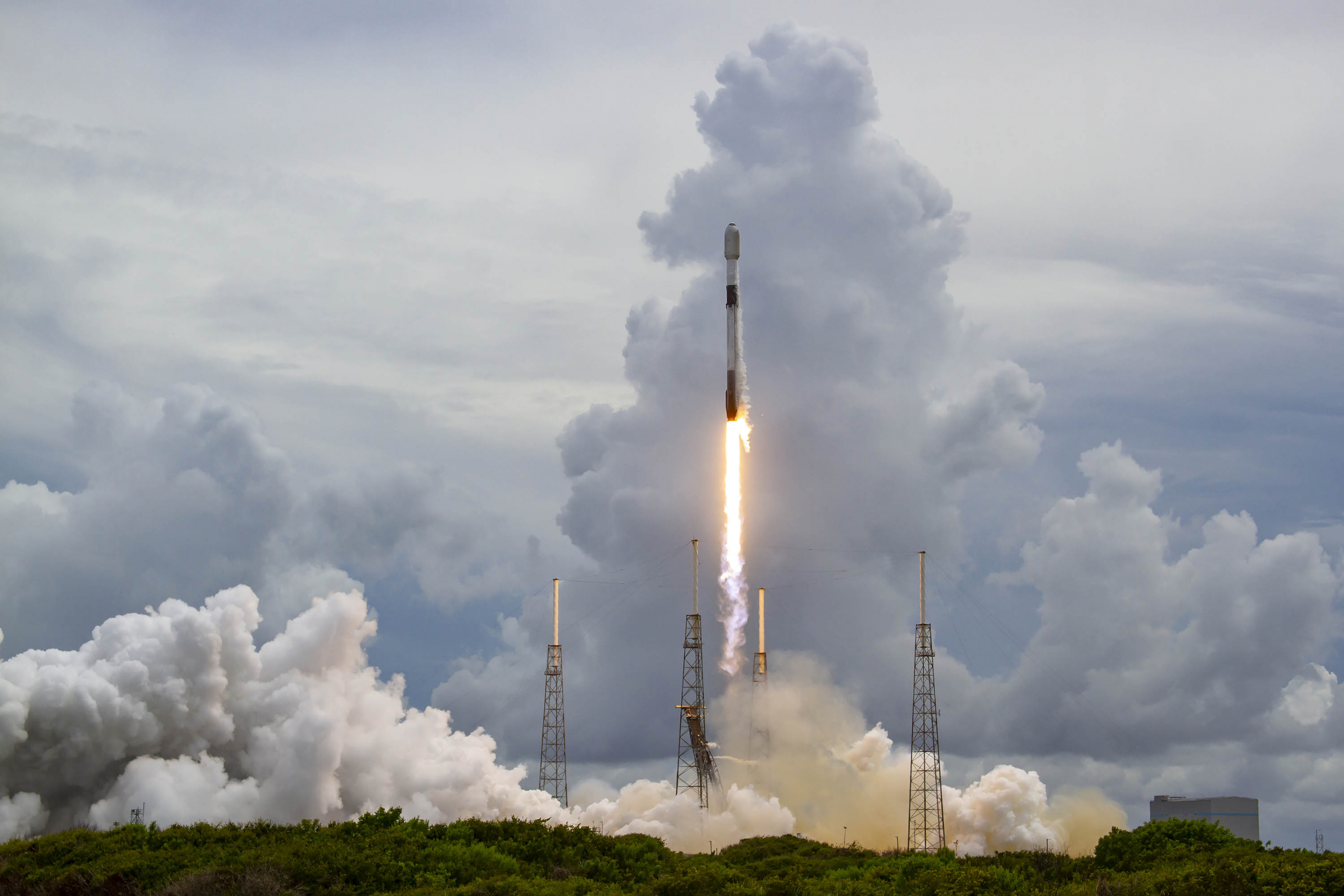 Falcon 9 lifts off on the Transporter-2 rideshare mission – via SpaceX.

The initial variant of Sherpa, Sherpa-FX, does not have propulsion. It serves as a port expander to allow multiple payloads to share space on a launch vehicle. The Sherpa-FX separates from the launcher and then deploys its payloads over the course of a few hours. Two of these vehicles have launched, and another is scheduled to fly on the Transporter-3 mission at the end of the year.

The first Sherpa-LTE vehicle was launched in June on the Transporter-2 mission. This Sherpa variant has an electric propulsion system from Apollo Fusion (now part of Astra Space). After separating the customer payloads, Spaceflight began a test campaign to check out the performance of the new subsystems on the vehicle for avionics, power generation, attitude control, communications, and propulsion.

The testing has been proceeding well with thruster firings in mid-August and early September, returning good data on the performance of the thruster. Spaceflight will continue testing this vehicle with further maneuvers that lower the orbit towards reentry.

This mission will be the first time that Spaceflight performs an orbit change maneuver before releasing a customer payload, as the NASA LLITED CubeSats are targeting a slightly different altitude than the insertion orbit for the launch.

Sherpa-ES is based on Sherpa-LTC with the addition of larger propellant tanks. The two vehicles will use the same thruster. Some radiation shielding has been added to the avionics to handle the higher radiation dose the vehicle will receive compared to LEO missions, and software robustness has been increased. Spaceflight has a roadmap to further raise the radiation tolerance of the avionics platform in the future for longer-term missions that will need to handle larger doses of radiation.