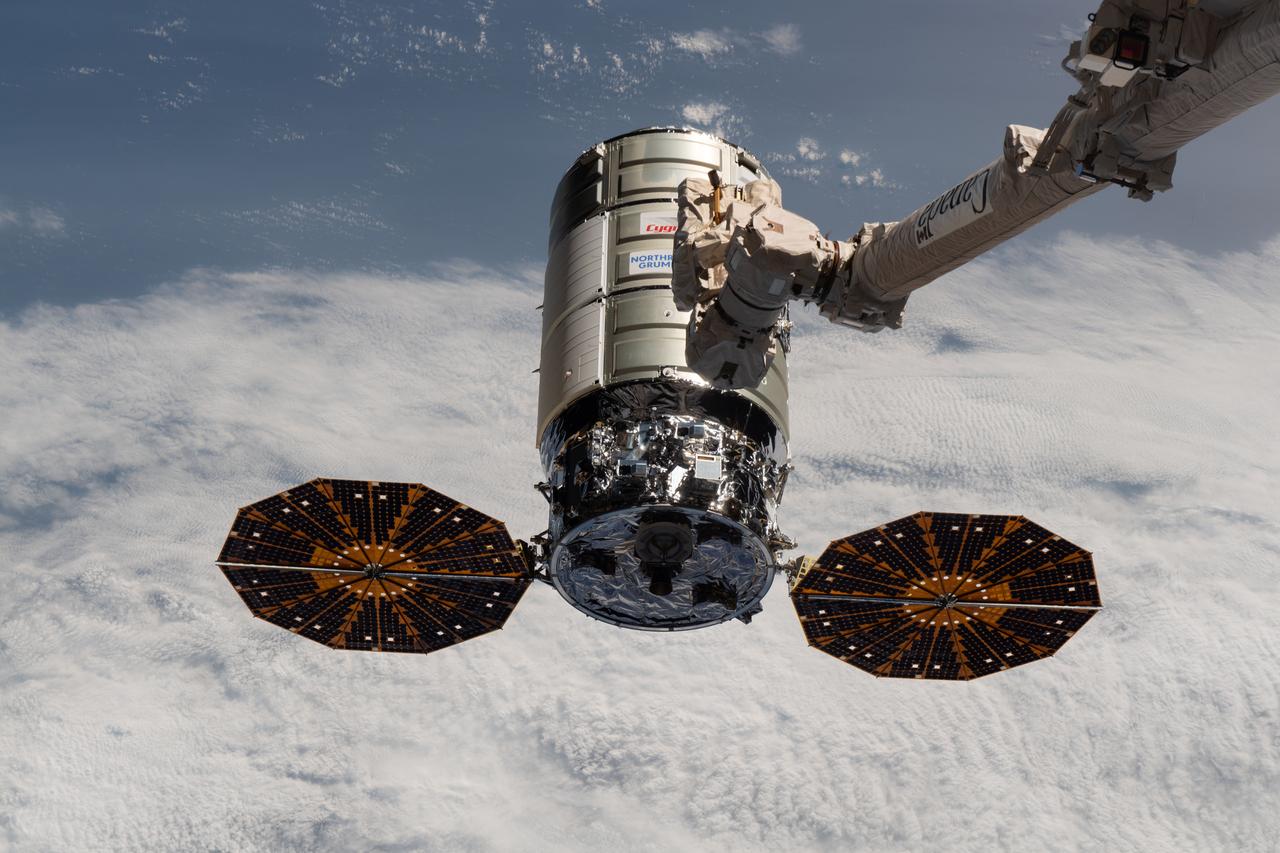 After a 36 hour phasing profile, the S.S. Ellison Onizuka cargo ship, part of Northrop Grumman’s NG-16 mission, has arrived at the International Space Station (ISS).  Safely in the grip of Canadarm2, Cygnus will now be attached to the nadir port of the Unity (Node-1) module for the multi-month cargo delivery and removal process.

Speaking before the berthing, Northrop Grumman’s Frank DeMauro discussed future Cygnus missions to the station as well as non-ISS uses for the craft — which has become more than just a cargo transport vehicle and has already seen its technology incorporated into the HALO habitation module for NASA’s upcoming Lunar Gateway station.

Delivering a total of 3,723 kg of crew supplies, unpressurized cargo, science experiments, spacewalk equipment, station hardware, and computer equipment, the NG-16 mission is the fifth of six guaranteed flights to the station under the CRS2 (Commercial Resupply Services 2) contract with NASA.

While only one flight, NG-17, remains per the original CRS2 guarantee, NASA has already awarded Northrop Grumman two additional extension missions, NG-18 and NG-19 — all of which are set to be “Mission A” types.

“We refer to them as our Mission A,” stated Frank DeMauro, Sector Vice President and General Manager, Tactical Space Systems at Northrop Grumman, in an interview with NASASpaceflight.  “That’s the Antares-launched Cygnus which delivers [up to] 3,750 kg of cargo.  It’s the same mission type, so far, that NASA’s ordered all the way through 19.”

Overall, there are three types of Cygnus missions available to NASA for the CRS2 contract period:

“If we start from when [NASA] turns the mission on and [they] said, ‘You know what, for, let’s say NG-20, we’d like a bigger Cygnus, we’d like more cargo, or a bigger cargo module’… or if they wanted the unpressurized version, it would kick off an effort to do some work to get that particular mission on order,” noted Frank.

“The schedule would be a little bit longer because they haven’t ordered any of those types before, so it’s not a recurring delivery.  So there would be some work to do to get that particular cargo carrier on orbit.”

Additionally, NASA could change its mind after ordering a particular mission and decide to swap to a different configuration.

“If they decided after ordering a mission, let’s say they ordered a Mission A, and then later in the flow they decided they wanted to change that to a Mission B or a C… we’d have some work to do to get the other cargo carrier under contract, and we’d have to start the build of that cargo carrier at that point.”

“But a lot of the longer lead hardware is in the service module because that’s where all the computing and propulsion systems are. That was one of the strategies we employed by using the same service module for any of those three mission types.”

As @northropgrumman works on the #HALO module for #NASA's Lunar Gateway, the decision to co-manifest its launch with @Maxar's Power & Propulsion Element has led to design changes & a significant reduction in technical risk.

Speaking to the addition of the NG-18 and NG-19 missions, Frank expressed that their awards were not a surprise — in large part due to extension missions being given to both Northrop Grumman (then Orbital ATK) and SpaceX during the CRS1 contract period.

“We always felt that as long as we kept performing for our customer that they would come back and order additional missions to carry them as long as they would like to keep the station flying,” noted Frank.

“The contract mechanisms are in place to do that, and our overall strategy is to be responsive to what they need.  As station extends, we’re looking forward to extending our delivery services with NASA throughout that time.”

But the ISS will not be in service forever.  And while Axiom plans a commercial addition to the station in the coming years and an operational extension of ISS among the US, European Space Agency, Canadian Space Agency, and the Japan Aerospace Exploration Agency to 2030 is highly likely, the day will come when the ISS will have to be retired.

In fact, Axiom has specifically designed its addition to the ISS to one day be capable of free-flying as its own independent station.  In this way, Axiom can detach its modules en masse from the ISS before its end-of-life dive into Earth’s atmosphere and establish a continuous, no gap, station presence in low Earth orbit for the US. 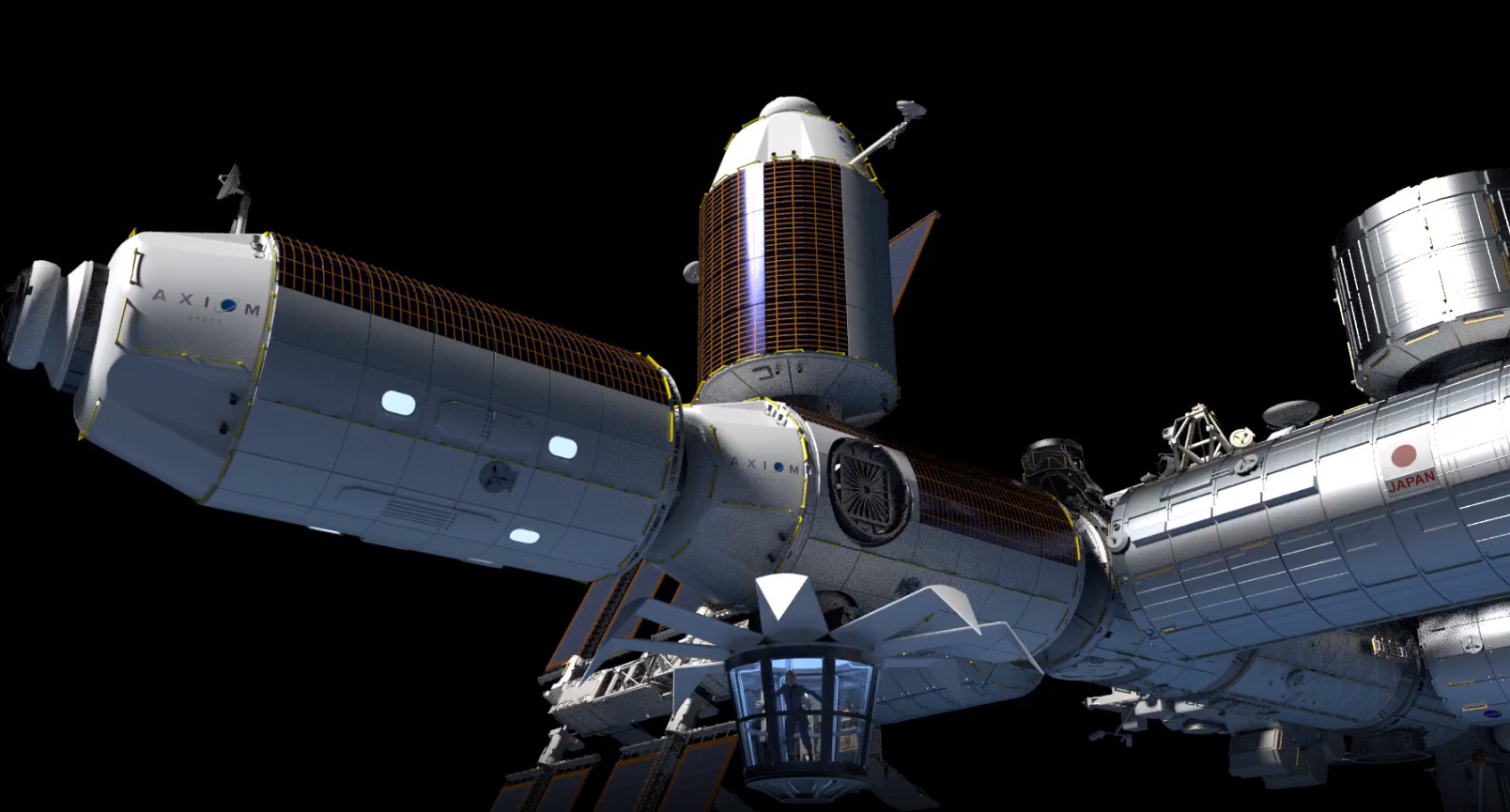 Artist’s impression of a potential “Axiom Segment” configuration on the ISS. (Credit: Axiom)

While Axiom was not mentioned in the interview, Frank did note that “We’ve had conversations with other companies that are really actively planning to have a destination in low Earth orbit for commercial purposes and even some that are still trying to figure out what their system would look like… mainly so they understand the services we can provide now with an off-the-shelf, so to speak, Cygnus, and what services we think we could provide for other capabilities.”

Cygnus could also be contracted for free-flying, year-long science missions — a capability the craft previously demonstrated on the NG-11 mission after leaving the station following a successful cargo delivery.

The craft’s ability to host scientific experiments could — as it has with the ISS — allow it to serve as a temporary science module addition to future space stations while it delivers cargo as well.

“We’ve shown the ability within the Cygnus program to evolve its capabilities over time.  And as I think we’ve also demonstrated, [we’ve taken it from] being just a cargo delivery service to more of a science lab.  It’s those capabilities that we can continue to evolve, as the demand is out there, and just bring Cygnus to be an even more capable vehicle,” noted Frank.

“If you step back a bit, one of the things I’ve been saying for years as people would ask questions about how we saw Cygnus being extensible to lunar use,” added Frank, “is that, on one hand, we’ve got the building blocks of Cygnus being able to be upgraded to support the HALO [Habitation and Logistics Outpost] that’s going to be the first habitat around the Moon.”

“On the other hand, through the development of those technologies, particularly in the area of a much more stringent environment in terms of radiation, a longer life vehicle, and having the environmental control systems installed, the ECLSS installed so that HALO can be a habitat, we can now take HALO and have it be the building block or maybe even the destination for astronauts in low Earth orbit.”

“Because it’s going to be a habitat.  So we’ve got this full circle going on where Cygnus helps us develop HALO, and now the systems we’re developing for HALO can be used to augment Cygnus and have it be a habitat in low Earth orbit.”