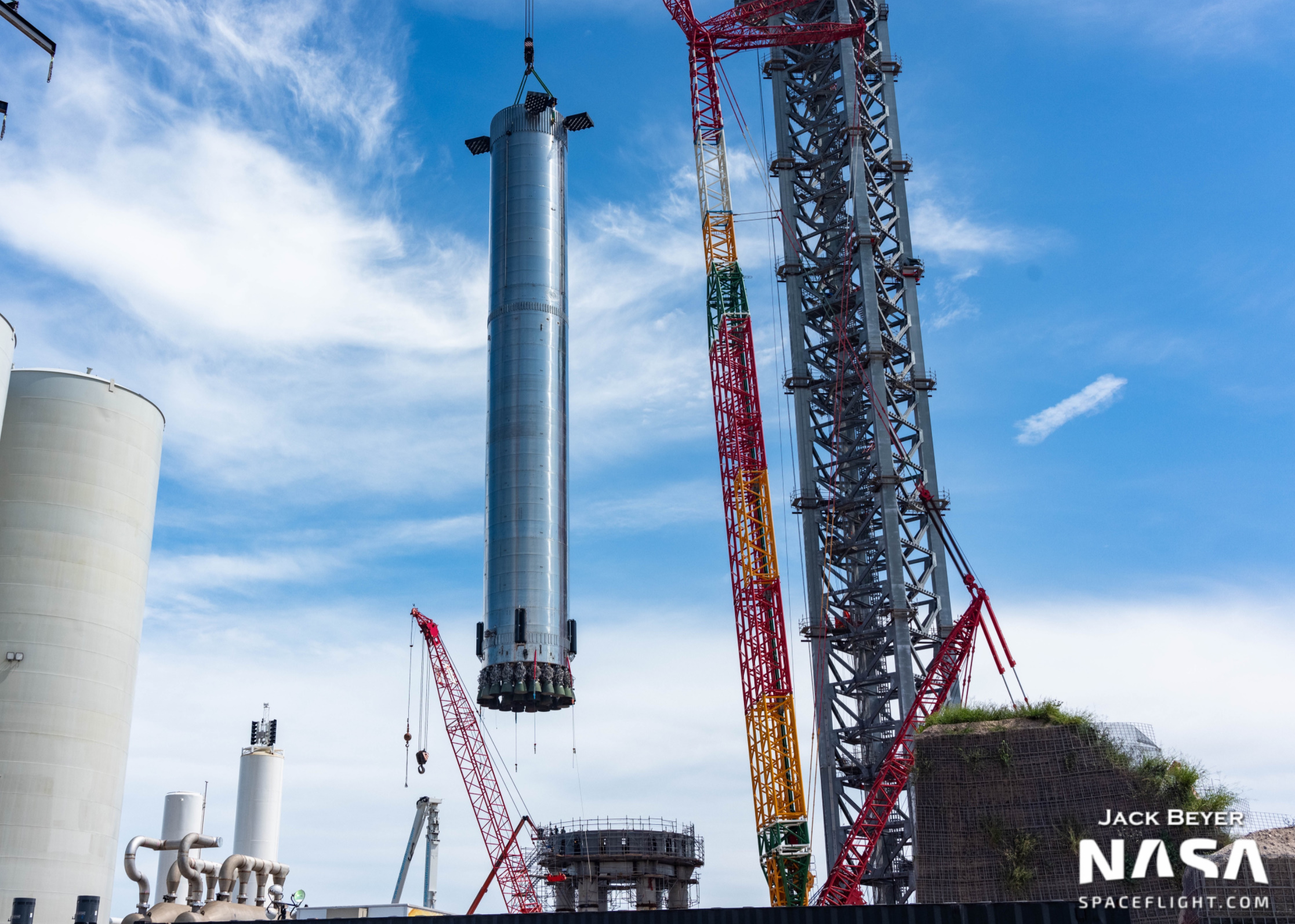 In a marked increase to the already-impressive production cadence at SpaceX Starbase, it’s all hands on deck with Booster 4 and Ship 20 preparations ahead of the duo meeting at the launch site. Booster 4 was stacked on Sunday, with all 29 Raptors installed by Monday morning. It then rolled to the launch site on Tuesday and was installed on the Orbital Launch Mount on Wednesday. Ship 20 has since moved into the vacated High Bay for nosecone mating, which was completed ahead of Wednesday morning.

While the orbital launch attempt is not imminent, the duo is expected to undergo a series of ground testing objectives, including multiple Static Fire tests for the booster. This will also provide time to complete the final elements of the Orbital Launch Site (OLS), from which the duo will conduct the milestone test flight.

Following a short ground testing campaign with Booster 3, which included cryo proofing and a three-engine Static Fire test, the focus is now on what will become the first integrated stack of a Super Heavy booster and a Starship vehicle.

This is set to be achieved in double-quick time, following a call to arms from SpaceX to its workforce. This included the transportation of hundreds of workers from other sites in the country, as per a memo leaked on Facebook.

That was later confirmed by the local media reporting high booking uptake in the local hotels, along with extra parking capacity at Starbase. Elon Musk has since confirmed that Starbase is in a “Warp 9” surge.

Vehicle preparations on Booster 4 are continuing inside the High Bay, where all the sections were staged for final mating operations. This included the Thrust Section with its impressive set of plumbing spread over the Thrust Puck.

Another first-time operation also took place late last week, with the first installation of a Grid Fin. Notably, for Booster 4, at least, these Grid Fins will remain extended through the entire flight, contrasting with those on Falcon 9 which only deploy after stage separation.

By Sunday, all four Grid Fins were installed on Booster 4 and painted black.

Tweaks to the forward plan remain on the cards, with Elon Musk tweeting, “Grid fin designs clearly work, but do they maximize payload? Good chance that they do not. Something with much more drag to reduce terminal velocity & so reduce landing propellant might have better performance. Not sure. Potential future optimization.” 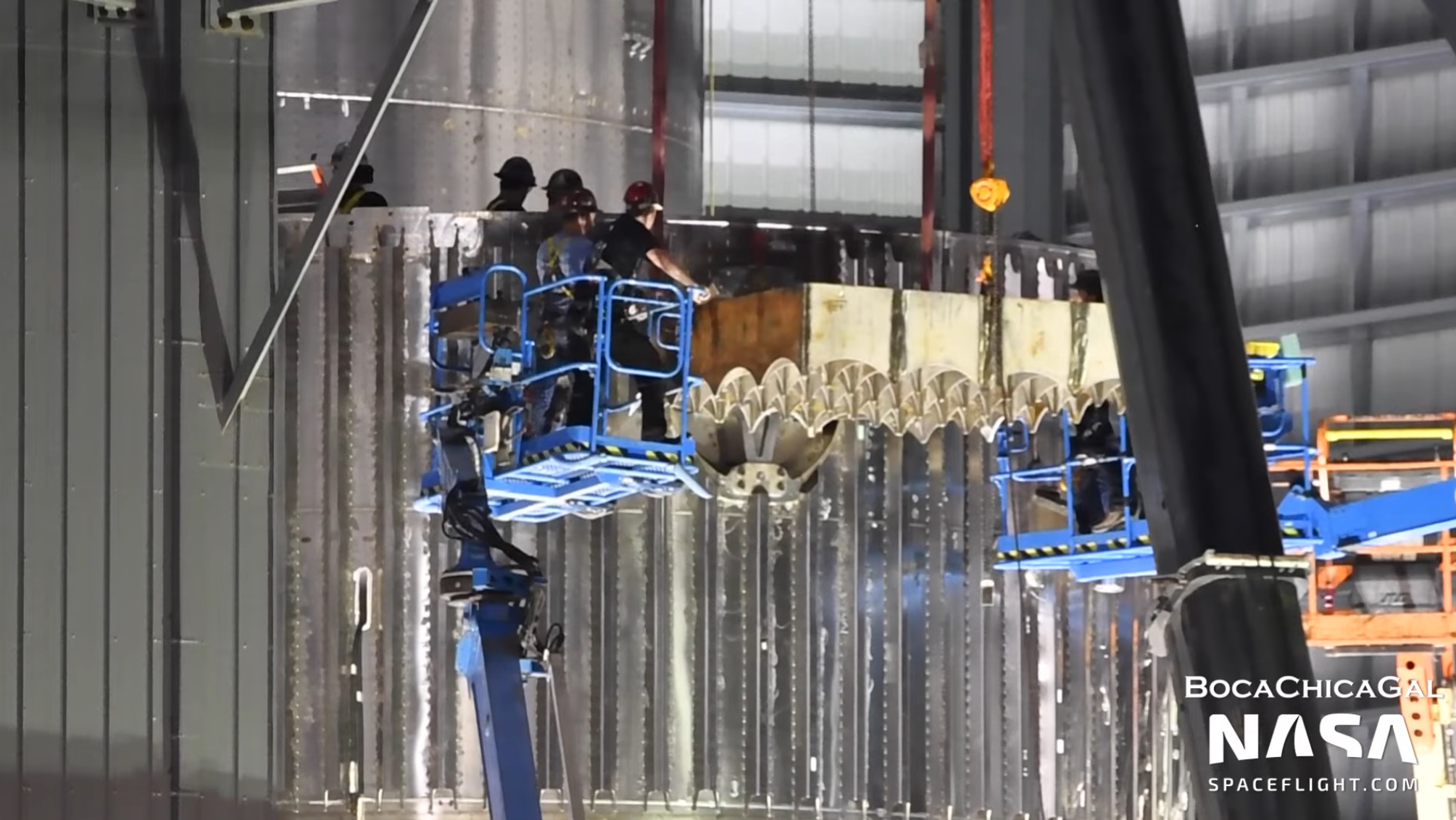 A rollout down Highway 4 occurred Tuesday. However, its actual pad destination was not confirmed until the roll was complete. It was always likely to be the Orbital Launch Site (OLS) based on recent tweets from Elon Musk.

SpaceX had numerous options on the path to seeing such a stack taking its position next to the OLS tower, likely determined by the pad’s own readiness.

Completing the Launch Tower’s Fixed Service Structure was marked by installing the ninth and final section. A small lightning tower rod is yet to be added atop this section.

The Tower is also yet to receive its catching arms mechanism, which is likely to double up as providing the capability of stacking Starships with the boosters. No separate crane is set to be added to the top of the tower.

At the base, the long-awaited rollout and installation of the launch table from the Production Facility provided the final piece to the launch mount puzzle.

The 370-ton piece of hardware will host the booster and provide the hold-down points, receiving the title “Stage Zero” from Chief Engineer Elon Musk on Twitter.

Stage Zero, which is everything needed to launch & catch the rocket, is at least as hard as the booster or ship

However, a lot of work remains before a Booster can be *fully tested* on the table, which led to the assumption Booster 4 will – at some point – pay a visit to the Suborbital launch site. Simply sitting on the OLS table now appears only to be a near-term goal.

With its two pads, albeit with one currently occupied by Booster 3, an interim plan could allow for Booster 4 to head to the suborbital site after full stack fit checks, allowing it to complete its predecessor’s path of cryo proofing and engine testing – this time moving past the three-engine test, eventually firing up nine Raptors.

Booster 4 would then be moved back to the Orbital Launch Site Pad (OLP) for a pre-launch campaign to eventually include a full 29 engine set Static Fire test.

Super Heavy Booster 4 at the launch site right now, waiting to be lifted onto the Orbital Launch Pad. So. Many. Raptors. @NASASpaceflight pic.twitter.com/b4IdHRO8Pt

As such, the most likely option was for Booster 4 to immediately head to the OLP, ready to receive Ship 20, for fit checks and photo opportunities. This would be ahead of the aforementioned test campaign that would likely occur at the suborbital site.

As per usual, Elon Musk often provides good clues to the near-term plans, referencing the Launch Table installation with “Needs to be level & match booster fittings. We will find out on ~Tuesday,” as tweeted this weekend.

Booster 4 did head directly to the OLS on Tuesday, with the lift on to the OLP completed on Wednesday.

Now remove the crane, imagine the Booster still conducting the landing burn, huge mechanical arms reaching out from the Tower, taking hold of the Booster before gently lowering it back onto the mount! https://t.co/aONYMhDesh pic.twitter.com/EgY5MTfWMP

Numerous deliveries of Raptors have taken place over the past number of days, including at least three Vacuum optimized engines.

While there are likely to be enough engines at Starbase to allow for a full configuration vehicle to be processed at the launch site, the actual flight engines are not expected to be installed until after the nine-engine Static Fire test.

Meanwhile, Starship 20 (Ship 20) was being processed inside the Mid Bay, ahead of its own journey to the High Bay for nosecone mating.

It is likely that Ship 20 will initially undergo ground testing at suborbital Pad B, either before or after it has enjoyed its first integrated stack opportunity with Booster 4.

Starship 20 moving from the Mid Bay to the High Bay a few moments ago. @NASASpaceflight pic.twitter.com/olTObtjTA3

Ship 20 received its aero surfaces in the form of the aft flaps, which are smaller in scale and thus lighter on S20 and beyond. This has been a benefit of lessons learned during the high altitude flight test campaign.

Meanwhile, the nosecone is undergoing TPS (Thermal Protection System) installation. It is also undergoing the installation of the flaps – for the first time covered in their own TPS – pointing to its speedy processing towards its eventual mate atop Ship 20.

Unlike previously flown Starships, during their high altitude “hops,” Ship 20 will be the first to launch into orbit, thus requiring the entire windward side of the vehicle to be covered in TPS tiles.

A Look to the Future:

While Booster 4 and Ship 20 will both end up in the ocean at the conclusion of the test flight, Mary (@bocachicagal) has already spotted sections for Booster 5 and Ship 21.

Clues to the future have either already been on view or confirmed via Elon Musk.

Firstly, a pathfinder nosecone was observed in recent days. This will be a key element of Starships opening operational flights, likely to begin with lofting huge amounts of Starlink satellites.

Such pathfinder operations are likely to continue on future spare nosecones as the design evolves.

Elon Musk also provided encouraging news about the down mass capability of Starship, albeit with a one word answer – “sure” – when asked if Starship could be used to return Hubble from orbit at the end of its lifetime, allowing it to be put on display, as opposed to suffering from a destructive re-entry.

SpaceX’s Chief Engineer also provided an update on the expansion of Starbase, with a new High Bay set to rise out of the ground in the coming months.

In expanded comments, Musk added that the new facility would be only slightly taller but much wider. This will allow for increased cadence with the stacking of sections to cater for SpaceX’s Rapidly Reusable rockets.
—

The post Starbase Surge sees SpaceX speed ahead with Booster 4 and Ship 20 appeared first on NASASpaceFlight.com.