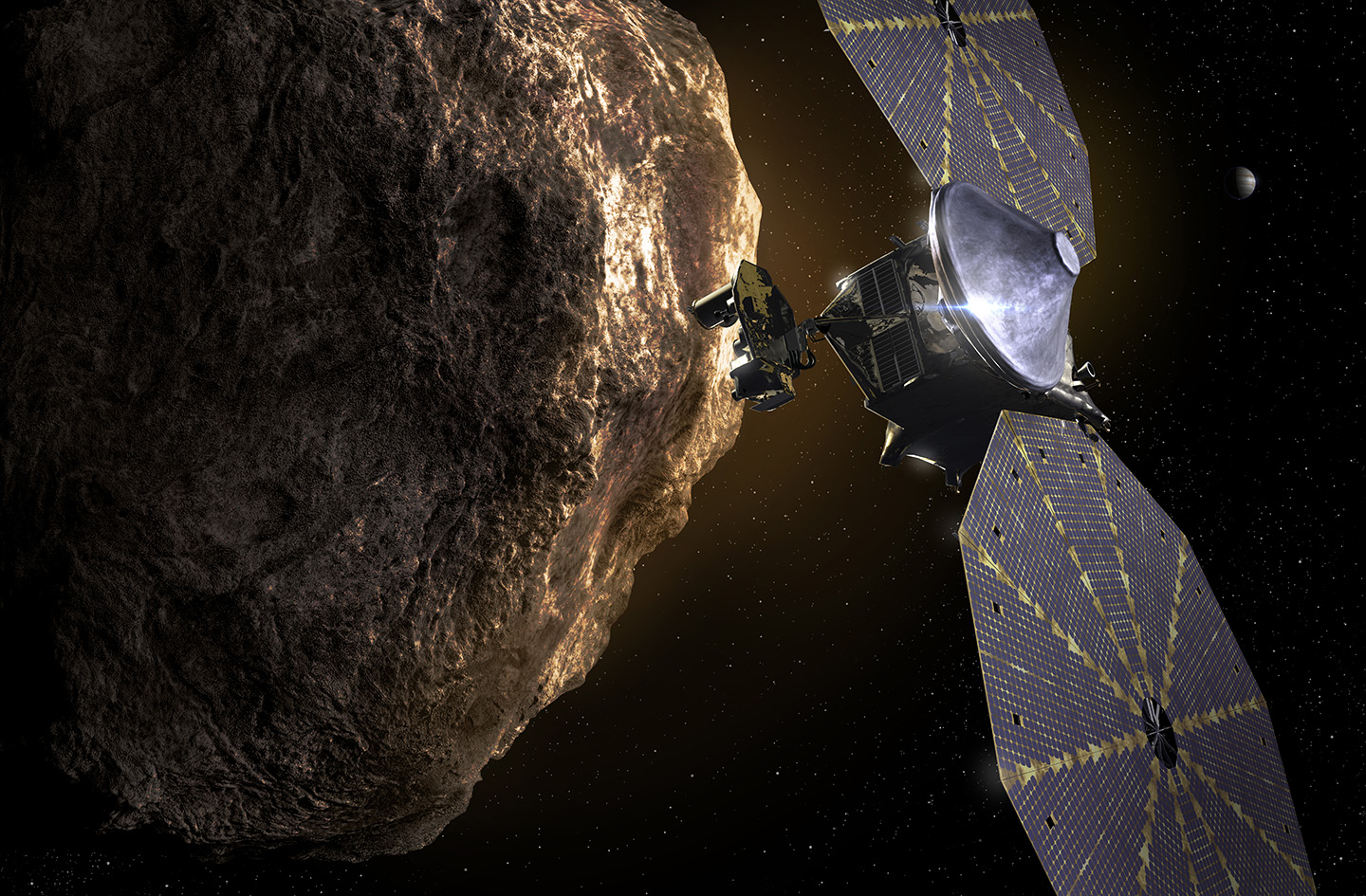 NASA and Lockheed Martin are another step closer to the launch of their Lucy Trojan Explorer mission, with the craft completing its pre-shipment review ahead of transportation to the Cape Canaveral Space Force Station in Florida in August.

Lucy will be the first mission of its kind, set to explore several asteroids in Jupiter’s L4 and L5 Lagrange points. The craft is targeted to launch on a United Launch Alliance (ULA) Atlas V 401 rocket no earlier than October 16, 2021 at 05:35 EDT from SLC-41.

The Lucy interplanetary spacecraft is part of NASA’s Discovery program. Originally proposed in May 2014, Lucy became a finalist in 2015 alongside Psyche, DAVINCI, VERITAS, and NEOCam. In January 2017, Lucy and Psyche were chosen as the 13th and 14th Discovery missions, respectively. DAVINCI and VERITAS were later selected in a follow-on Discovery program competition as the 15th and 16th missions in June 2021. NEOCam was also ultimately selected to fly by NASA in 2021 but not as part of the Discovery program.

Lucy was built at the Lockheed Martin Waterton facility in Colorado, incorporating lessons learned from the prior builds of the New Horizons and OSIRIS-REx spacecrafts. The three science instruments Lucy will carry were derived from those two prior missions. 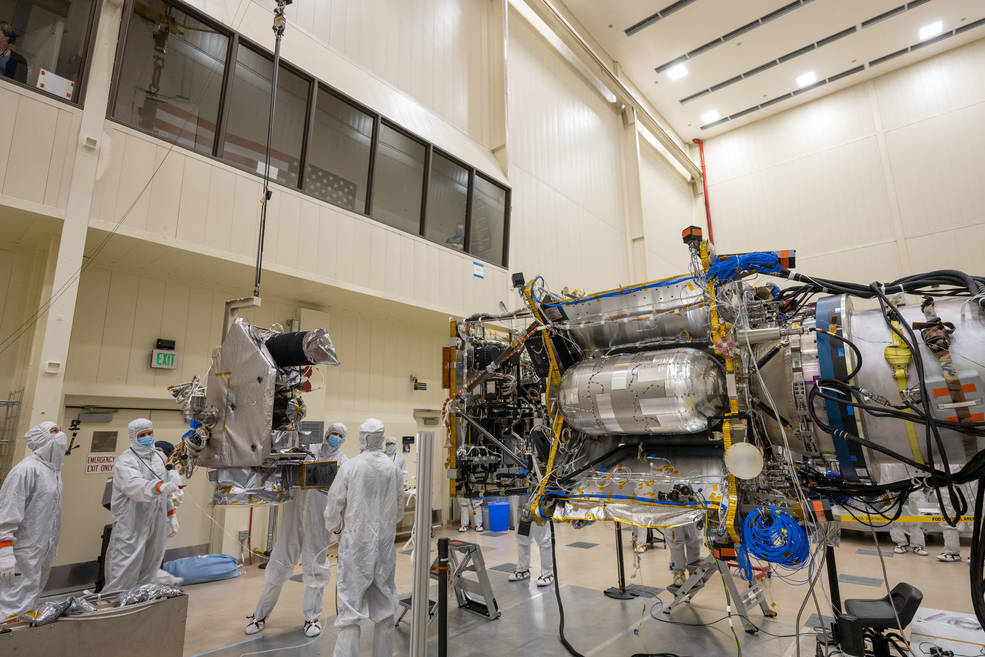 The third and final instrument is L’Ralph, which is made of two sub-instruments: the Multispectral Visible Imaging Camera (MVIC), a collar visible imager, and the Linear Etalon Imaging Spectral Array (LEISA), an infrared spectrometer. L’Ralph is based on the Ralph instrument flown on New Horizons and will be used to measure silicates, ice, and organics on the surface of the Trojan asteroids. It was built by the Goddard Space Flight Center.

The spacecraft will also use its radio telecommunications hardware and high-gain antenna to measure doppler shifts that will help determine the mass of the Trojans.

Once fully fueled, Lucy will have a launch mass of 1,550 kg. The body of the spacecraft is 14.25 m in width and 7.2 m in height. The spacecraft will also use twin 7.3 m diameter circular solar arrays as part of its power system. A 2-meter diameter high gain antenna will be used to communicate with Earth. 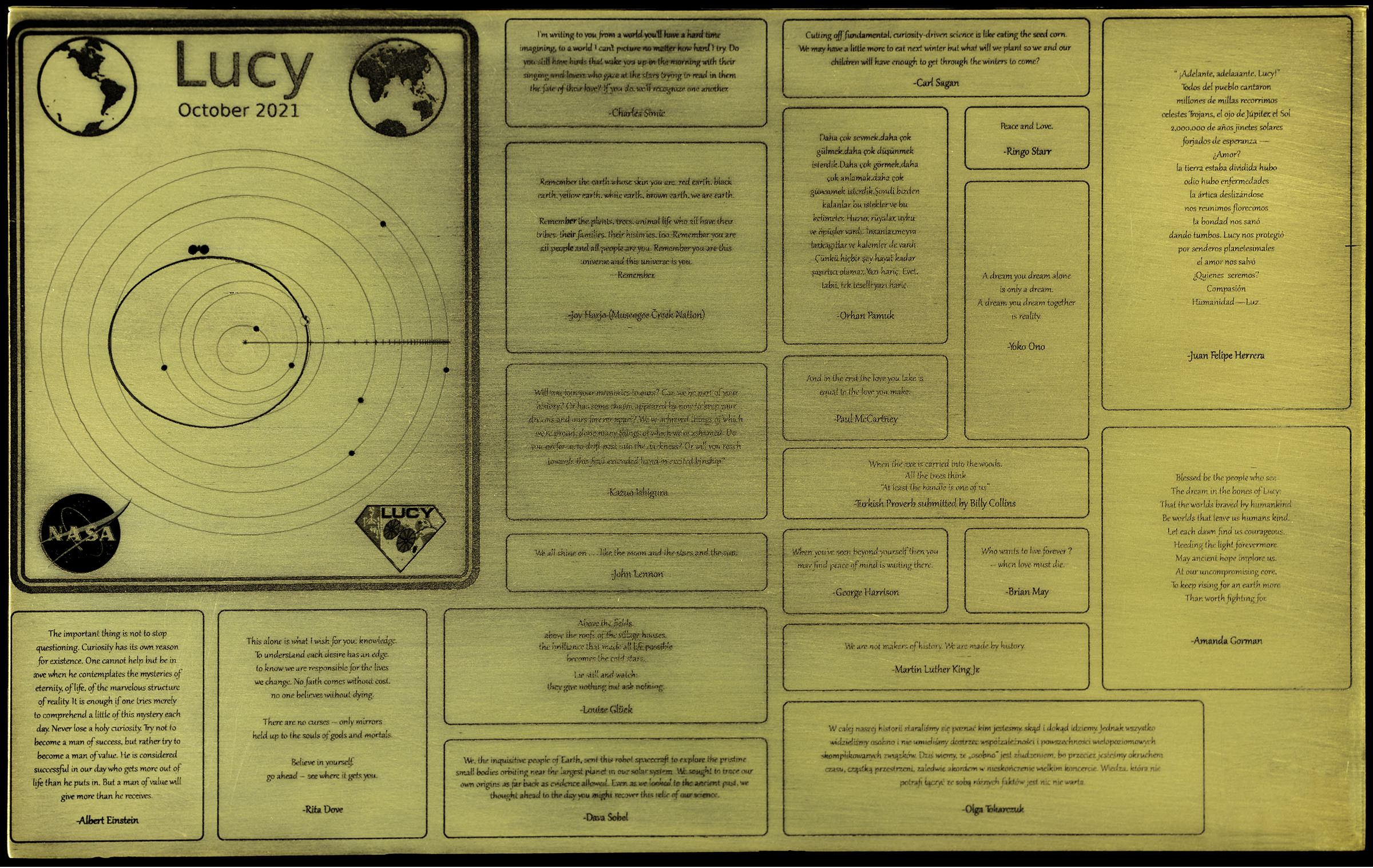 Lucy will also carry a special message. Known as the “Lucy Plaque,” this element of the mission will be used as a time capsule, carrying messages and diagrams. It will be similar to the “Pioneer plaque” used on the Pioneer 10 and 11 spacecraft.

Main assembly of Lucy was completed in February 2021, with teams then transitioning to thermal vacuum, vibration and shock, and electromagnetic testing. In April 2021, Lucy stretched its wings in a successful solar array deployment test.

With those test complete, Lucy passed its pre-shipment review in July 2021 and is in processing for delivery to Cape Canaveral in August. Once at the launch site, it will undergo final testing and fueling before being placed in the Atlas V’s 4.2-meter diameter payload fairing.

Once in its fairing, Lucy will be placed on top of the Atlas V rocket. Launch is currently set for no earlier than October 16, 2021, the beginning of a 21-day launch window that ends on November 5.

Following launch, Lucy will perform two gravity assist flybys of Earth in 2022 and 2024 to kick off its 12 year mission throughout the solar system. These flybys will put Lucy on the correct trajectory to intercept all seven of the asteroids it is expected to study. After completing the second Earth flyby, Lucy will be on the correct trajectory to flyby the first set of Trojan asteroids located at Jupiter’s L4 Lagrange point. 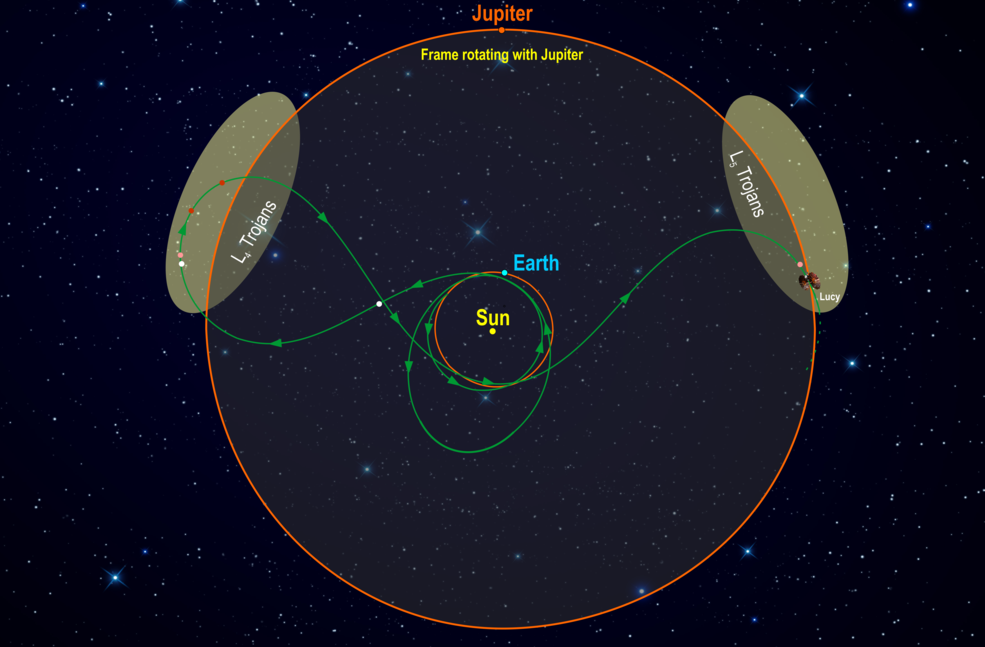 Although it may be used as a rehearsal, 52246 Donaldjohanson will provide valuable data on the C-type asteroid, which has been identified as a fragment of a massive collision 130 million years ago which formed the Erigone family of asteroids that 52246 Donaldjohanson is a part of.

Lucy is currently expected to flyby the asteroid on April 20, 2025.

After performing the flyby, Lucy will coast through interplanetary space for two years before arriving at the L4 “swarm” of Trojan asteroids in 2027.

The groups of asteroids located at Jupiter’s Lagrange points are described as “swarms” due to each asteroid’s close proximity to another. The L4 swarm is known as the “Greek camp” of Trojan asteroids due to most of the asteroids being named after Greek heroes in the Trojan war or from around the same time period.

Once at the L4 swarm, Lucy will prepare for flybys of four Trojan asteroids. The first flyby, set to take place on August 12, 2027, will bring Lucy to asteroid 3548 Eurybates. Eurybates is 64 km in diameter and classified as a C-type asteroid. Like 52246 Donaldjohanson, Eurybates is part of a collisional family in the Greek camp.

Eurybates also has a tiny, 1 km in diameter satellite named Queta which will be studied as well.

Eurybates is an interesting target as it is a C-type asteroid, which are quite rare in the Trojan families while being common in the main belt.

A little over a month after its flyby of Eurybates and Queta, Lucy will flyby asteroid 15094 Polymele. Polymele will be the smallest Trojan visited, at just 21 km in diameter. Like the final two Trojans Lucy will visit, Polymele is a P-type asteroid with a low albedo, a featureless reddish spectrum, possible organic rich silicates, carbon and anhydrous silicates, and possibly water ice in its interior. 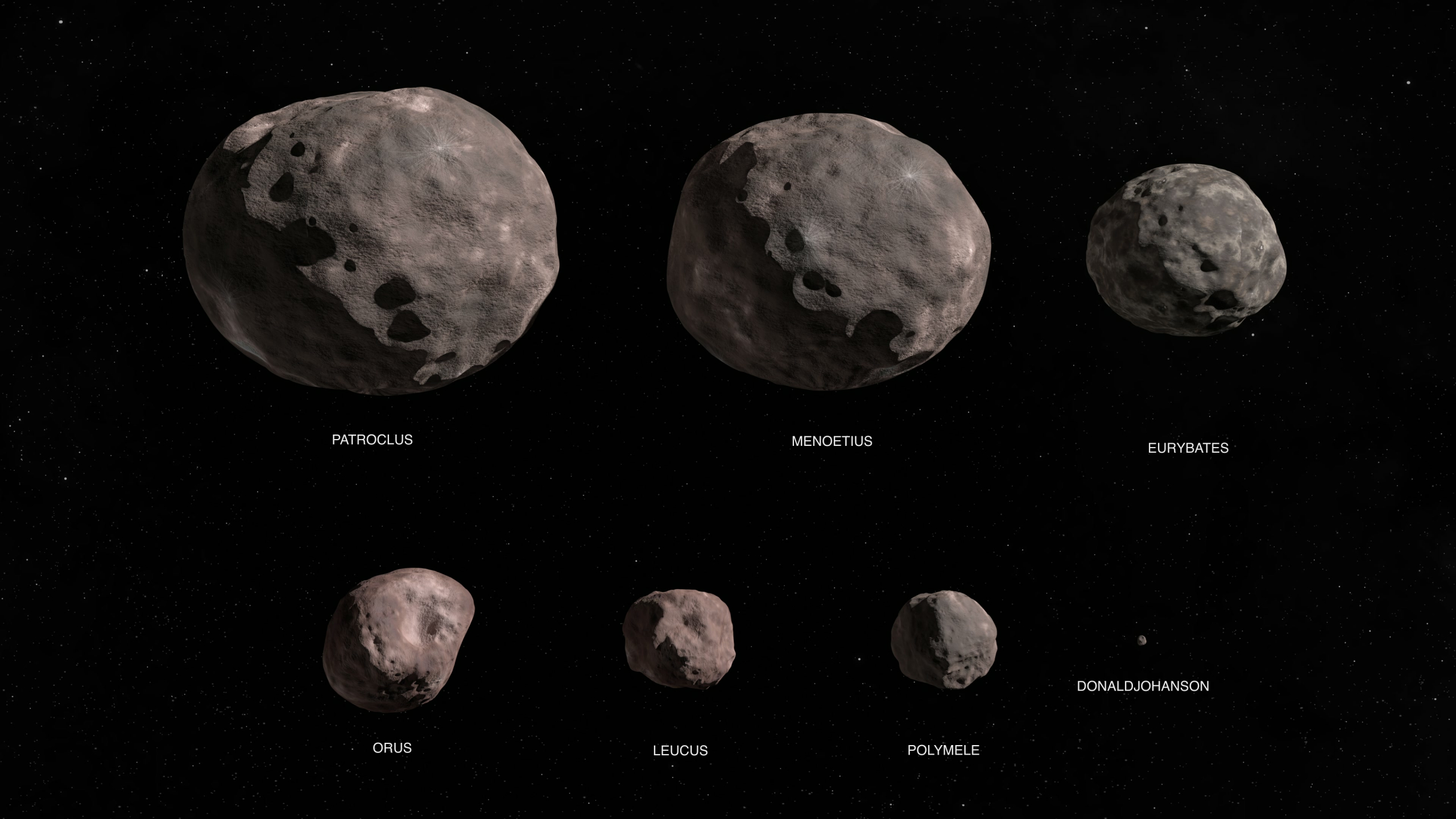 The craft will then coast through the Greek camp L4 swarm Trojans for 7 months, culminating on April 18, 2028 with a flyby of  asteroid 11341 Leucus — its 3rd L4 Trojan asteroid flyby.

Leucus is a D-type asteroid that is 34 km in diameter. Scientists plan to compare Leucus to the other D-type asteroids Lucy will visit to understand what materials make up this class of dark red asteroids. Leucus itself is likely quite elongated in shape, as its brightness fluctuates when observed from Earth.

Lucy may also provide answers to why Leucus rotates as slowly as it does — once every 19.4 days (466 hours).

The final asteroid in the L4 swarm to be visited by Lucy will be 21900 Orus, another D-type asteroid. Lucy is expected to pass the 51 km diameter asteroid on November 11, 2028, a little less than six months after its flyby of Leucus.

At this point, Lucy will exit Jupiter’s L4 point and begin a coast-phase toward Earth, performing a gravity-assist with the planet in December 2030 to send it on a trajectory to Jupiter’s L5 point. When it arrives at the L5 Trojan swarm, known as the “Trojan camp,” in 2033, it will examine its final two Trojan asteroids in a single flyby.

This is a set of Hubble images showing the binary asteroids 617 Patroclus and Menoetius.

The pair of P-type Trojan asteroids orbit one another at a separation of 680 km. In 2033, NASA's Lucy mission will perform a flyby of the binary system, after visiting 5 other asteroids. pic.twitter.com/Ncsija44Hj

The binary pair 617 Patroclus and Menoetius orbit one another with a separation of 680 km. Patroclus is 113 km in diameter while Menoetius is slightly smaller at 104 km. Both Trojans are P-type asteroids, similar to the L4 Trojan Polymele, which Lucy will have visited 6 years earlier at this point.

Scientists currently believe the two Trojans are primordial asteroids, leftover material from the formation of the solar system. Lucy is currently planned to flyby 617 Patroclus and Menoetius on March 2, 2033. At this point, the original mission will end.

At the completion of Lucy’s mission, the daring spacecraft will become the only mission in history to visit 8 different locations (Earth, Donaldjohanson, Eurybates, Polymele, Leucus, Orus, Patroclus, and Menoetius) in a single mission.