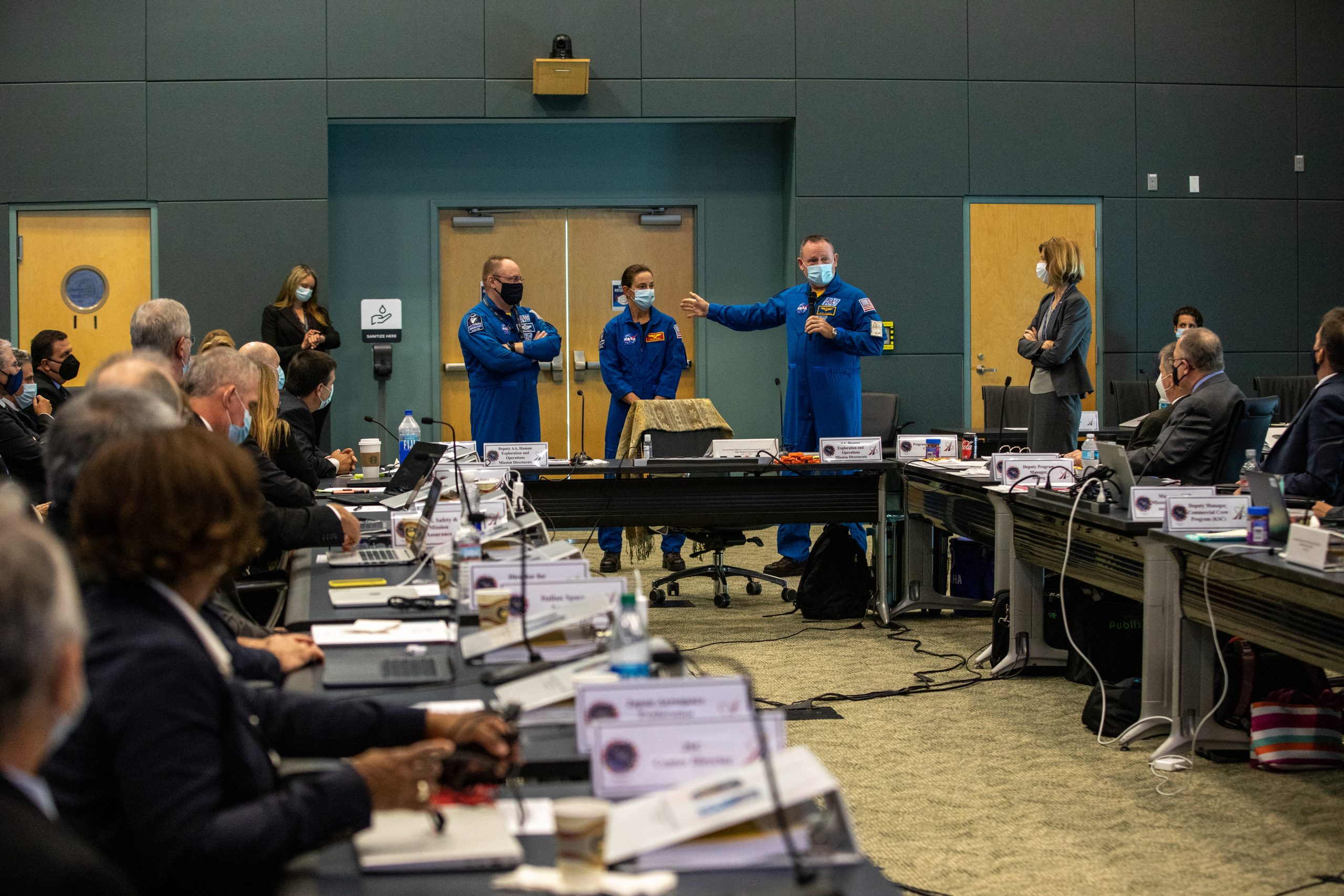 NASA and Boeing have finished the agency Flight Readiness Review (FRR) for the second Orbital Flight Test (OFT-2) of the CST-100 Starliner spacecraft. OFT-2 will demonstrate the changes made to the Starliner spacecraft following the first OFT mission, which was conducted in December 2019.

OFT-2 is the third flight of the Boeing CST-100 Starliner, following the pad abort test and the first OFT mission. This mission will demonstrate the changes made to Starliner after the partial failure of the first OFT mission, which was cut short due to multiple software issues during flight.

After undergoing many changes, Boeing made the decision to re-do OFT. The Starliner spacecraft underwent several software changes, a multitude of software testing, and one major hardware change to the docking system. A new cover was added to the nose of the Starliner to protect the docking port from the dangers of reentry, similar to the nose cone of SpaceX’s Crew Dragon.

With the hardware and software changes completed and the Starliner now integrated with the Atlas V rocket, there were two critical pre-launch steps. The first, which was just completed, was the Flight Readiness Review, or FRR. 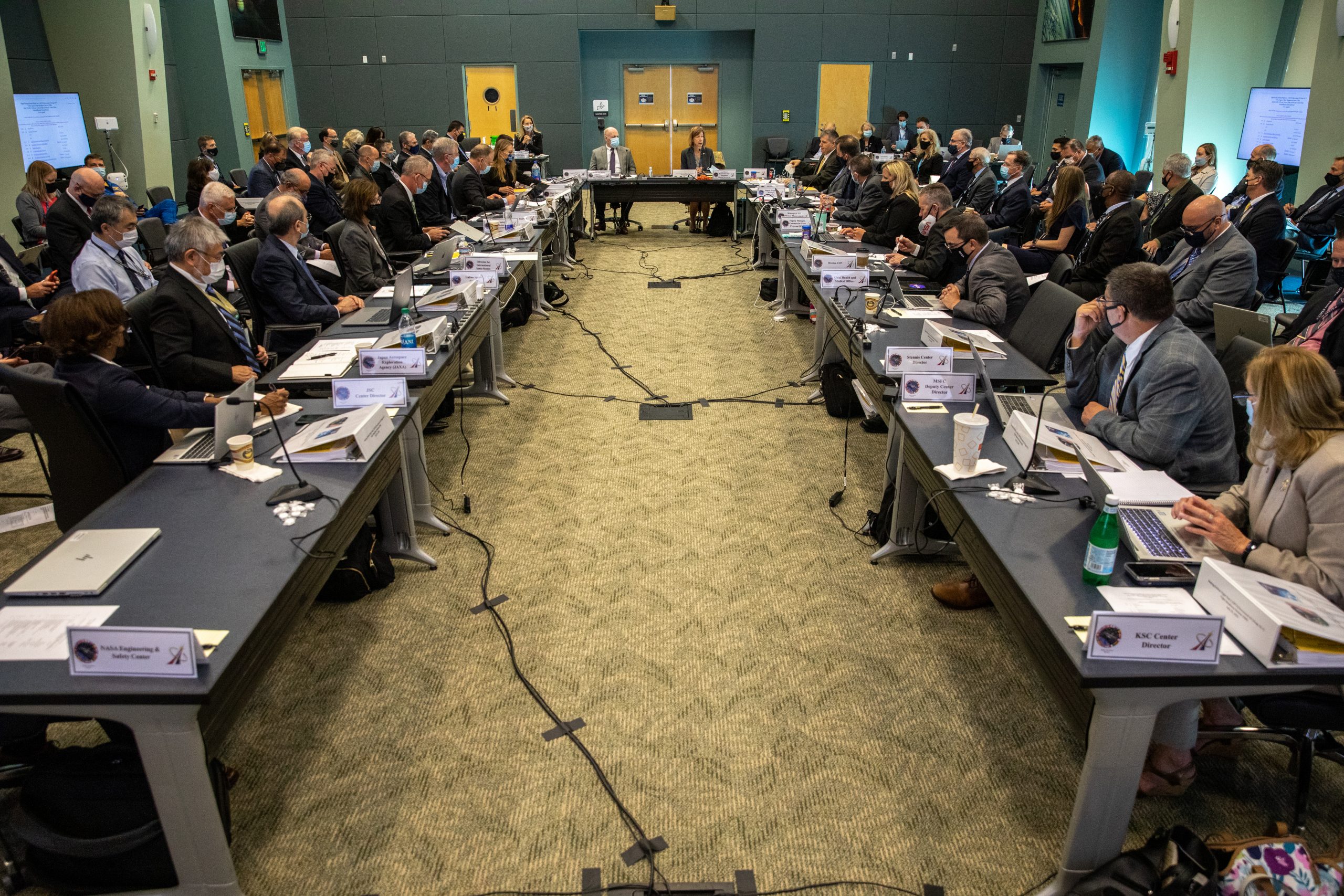 The FRR is a meeting between Boeing, NASA, United Launch Alliance, Roscosmos, JAXA, and other International Space Station partners where they discuss the status of Starliner’s systems. The teams presented technical in-depth assessments, ensuring that the spacecraft, ISS, and launch vehicle are ready to support Starliner’s flight.

The FRR has historically been the most important “go” for launch by NASA to launch a mission. Previously a major part of Space Shuttle campaigns, these reviews are now conducted for all Commercial Crew Program (CCP) missions.

The OFT-2 FRR marked one of the shortest Commercial Crew Program FRRs to date, lasting under a day, finishing at ~2:30 PM EDT (18:30 UTC).

After the review, the teams declared that Starliner is go to launch to the ISS at 2:53 PM EDT (18:53 UTC) on July 30. Roughly 24 hours after launch, the Starliner spacecraft will dock to the forward port on the ISS’s Harmony module, which will mark the first time that the Starliner has docked to the ISS. There is a backup launch window on August 3.

Starliner, we are go for launch!
In today's Flight Readiness Review, Boeing, @NASA and its international partners gave a go for the Orbital Flight Test-2 mission.

As with any FRR, a number of issues were discussed and closed out. The major focus of the FRR was on the lessons learned from the first OFT mission and the changes made to the vehicle. This included closing out all 61 flight software corrective actions identified by the independent review board, as well as all 19 communication system actions.

In addition, the Boeing team is flying the spacecraft in a configuration as close to the crewed configuration as possible. This includes the abort system being armed for the entire ascent, the first time Starliner’s abort system will be armed during a flight. Furthermore, the vehicle will be flying with crew displays, minor modifications to the wiring of the spacecraft, and other minor changes.

Starliner will undergo its Launch Readiness Review on July 27, where a final go will be given for launch. After the LRR, the Atlas V rocket and Starliner spacecraft will be rolled out to the launch pad at Space Launch Complex 41 (SLC-41) at the Cape Canaveral Space Force Station for launch.

United Launch Alliance (ULA), the launch provider for the OFT-2 mission, has been readying the Atlas V N22 launch vehicle ready for the mission. The “N22” is the configuration of the Atlas V for Starliner missions. The “N” in the N22 means there is no payload fairing on the vehicle. The first “2” is the number of Aerojet Rocketdyne AJ-60 solid rocket boosters (SRBs) being used on the Atlas V first stage. The last “2” means the number of RL-10A-4-2 engines being used on the Centaur second stage.

The Atlas V Common Core Booster (CCB) being used for this mission is AV-082. It was delivered in June 2019 to Atlas Spaceflight Operation Center (ASOC) at CCSFS, when it was originally intended to support the Crewed Flight Test (CFT). Two years later, it was moved to the Vertical Integration Facility (VIF) and lifted vertically to support OFT-2. On July 6 and July 8, the twin AJ-60 SRBs were mated to the Atlas V booster. 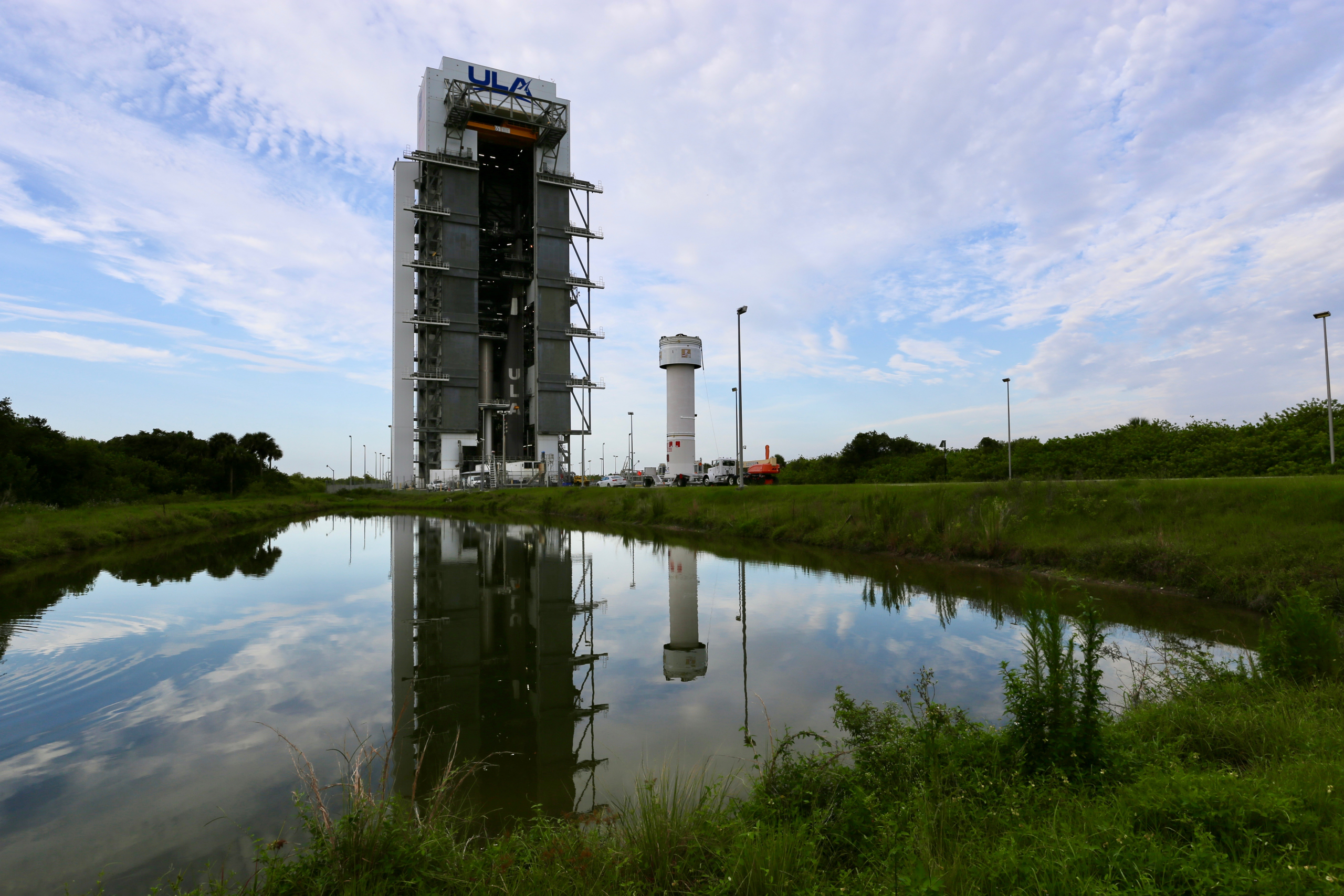 OFT-2 is using Spacecraft 2 which, like AV-082, was originally supposed to be used for the Boeing CFT mission. It underwent final cargo loading and then began fueling in early June. Starliner will carry 200 kg of pressurized cargo up to the ISS, and will bring 260 kg back to Earth.

Starliner was ready for mating three weeks later. The spacecraft was moved from Boeing’s Commercial Crew & Cargo Processing Facility (C3PF) to the SLC-41 Vertical Integration Facility (VIF) on July 17. Then it was mated to the LVA on top of the Centaur.

The launch of OFT-2 is currently set for July 30 at 2:53 PM EDT (18:53 UTC). Like other ISS missions, it will have an instantaneous launch window to loft Starliner to orbit.

The Atlas V first stage ascent will last approximately four and a half minutes. Six seconds after booster engine cutoff, the Atlas and Centaur will separate, and the twin RL-10 engines will ignite. The Centaur will burn for around seven minutes to place Starliner on a sub-orbital trajectory. This is done to provide a safe abort zone in the event of an issue with the spacecraft’s propulsion systems and also to reduce the number of solid rocket boosters needed for launch. 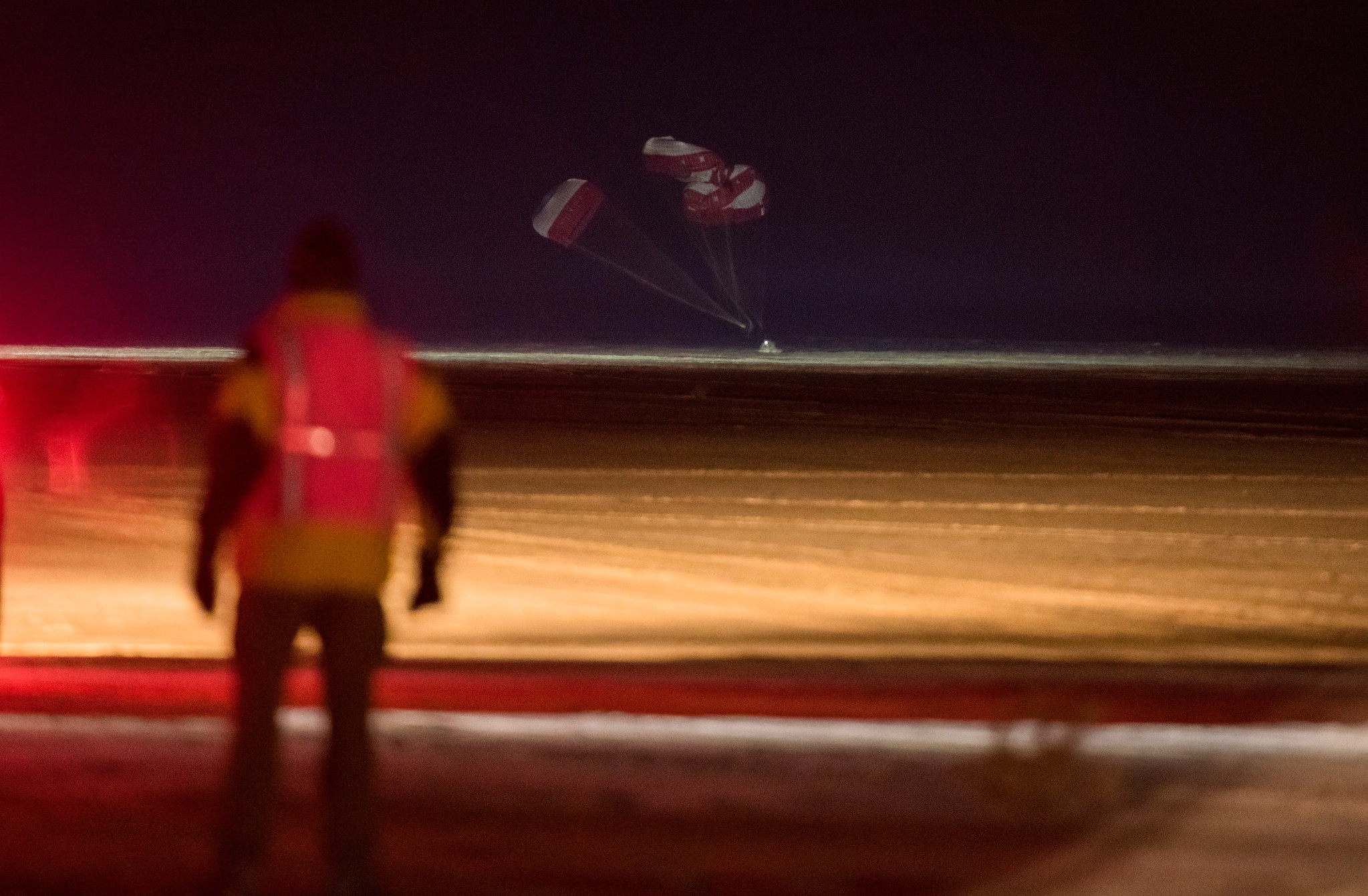 To make room for Starliner, on July 21, Crew Dragon Endeavour undocked from IDA-2 and relocated to IDA-3. Starliner will take Endeavour’s previous spot on the orbiting lab.

Starliner’s arrival will follow a very busy time at the ISS: on July 24, Roscosmos launched the new Nauka ISS module for the Russian segment. The Progress MS-16 spacecraft will undock with the Pirs module on July 24 to make room for the Nauka module.

The OFT-2 mission will last about six days, with undocking taking place on August 5. Once its time at the ISS is complete, Starliner will land at the White Sands Space Harbor (WSSH) and begin refurbishments for a future flight to the ISS.

The Starliner’s next flight after OFT-2 is CFT. It will carry NASA astronauts Barry Wilmore, Michael Fincke, and Nicole Mann for Starliner’s first crewed mission. That launch is currently scheduled for no earlier than late 2021.