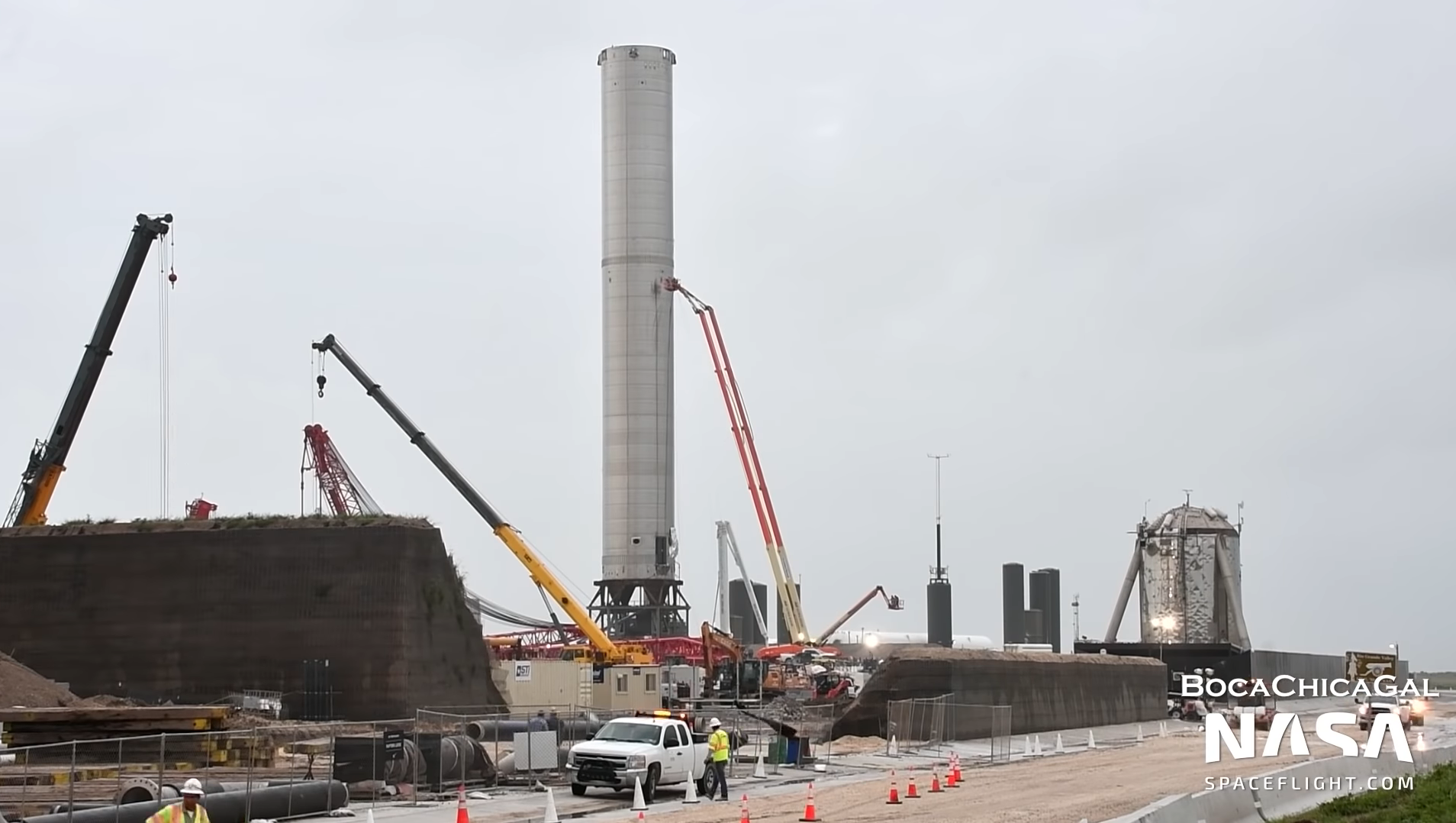 SpaceX is readying for the first static firing of Raptor engines connected to the base of a Super Heavy booster, known as Booster 3.  The test is a critical step in verifying and validating Super Heavy’s initial design for the first series of test boosters, including Booster 4, which is expected to launch Ship 20 on the Starship system’s first orbital flight attempt later this year.

The static fire is currently expected no earlier than Wednesday, 14 July, and will mark the first time SpaceX attempts to put a Super Heavy booster through a full ground test campaign.  With a new component of the Starship system, there are expected to be differences in the fueling process from what was seen with the “Ship” portions of the Starship system.

Nevertheless, the so-far-observed fueling processes do provide insight on critical pre-fueling, fueling, and engine conditioning needs for the system, and therefore provides a good template from which to start observations for the Booster part of the system.

What can be expected is a procedure, from a visual standpoint, that will include some identical elements to those used with Ship fueling, including indications that the propellant farm has been activated, that propellant is actively flowing into the vehicle, and that the engines are being thermally conditioned for ignition.

All of those things must occur to reach Raptor engine ignition.  They are not negotiable.  What’s more, similarity is expected due to the fact that SpaceX, under the direction of its Chief Designer, Elon Musk, have made the two elements of the Starship system — the Ship and the Booster — from the same materials with the same engines using the same propellants.

This not only drastically simplified the design to reduce cost and complexity — following Elon’s motto that “no part is the best part” — but also means that some pre-flight processes between the two elements will be the same in principle, even if timing varies to some degree.

Booster B3 continued to vent after today’s testing had concluded and the highway had reopened.

After seven flights of Starship upper stage variants (now referred to simply as “Ship”), this knowledge is useful in understanding how the Booster’s countdown will likely progress.

Start of the countdown

The methane recondenser marks the start of the countdown — the first visual milestone from the ground support equipment (GSE) at the suborbital test location in Starbase, Texas, leading up to a test firing.

For the testing of the Ship series so far, the recondenser, used to cool methane to a liquid state, showed activity on average 47 minutes before T0; however, this was quite variable in its duration.

For Booster testing, a similar behavior is expected as both the Ship and the Booster utilize liquid methane and liquid oxygen as the propellant and oxidizer for the installed Raptor engines.

There is no reason to suspect that the recondenser would not be used for Booster testing.

The first visual signs that active fueling operations are underway has been a small vent on the ground between the tank farm and the vehicle.

This vent occurs when the ground lines frost up while cryogenic liquids flow through them into the steel tanks of the launch system.

A few moments after fueling begins, the vehicle will start to show condensation and vapor at the bottom, which NASASpaceflight has termed the “skirt vent.”

For the Ship part of the system, fueling operations began approximately 30 minutes before the targeted T0 point; however, a full cryogenic propellant load was not pumped into the system as it wasn’t needed.

SpaceX is expected to use a similar approach to Booster ground testing; however, the proportion of fuel that will be loaded on the Booster vs. the Ship is unknown.  It is possible that this element of the process, from the “time before T0” standpoint, could come earlier than it did for Ship.

What is certain is the appearance of this indicator, since the cryogenic liquids will frost up the ground lines and the tank when they come into contact with them, is not optional if engine start is to be achieved.

The next visual milestone after fueling begins is what NASASpaceflight refers to as the “methane vent.”  This occurred around T-22 minutes in more recent Ship testing, while it previously happened at T-16 minutes.

A countdown change beginning with SN9 altered the timing of this event, and since then it has shown consistency in its appearance at T-22 minutes.

The purpose of this vent so far is not clear, but visually, it is a stream of gas that left the Ship upper stage at the top of the tanks.  Exactly where this vent will occur on the Booster is unknown ahead of the first fueling and static fire campaign.

This vent was a crucially important point in Ship countdowns, as it proved to be a consistent indicator for the eventual T0.  Of course, this could be different for Booster, as will become clear with future tests as SpaceX progresses deeper into Starship system design and testing.

The best indicator for a T0 on Ship tests was always the “Tri-vent” that began at T-12 minutes.

This event occurred from three vents at the bottom of the Ship as a small amount of super-cold cryogenic liquid oxygen began flowing into the Raptor engines to cool them to a specific temperature range needed to support a clean ignition of the engines. 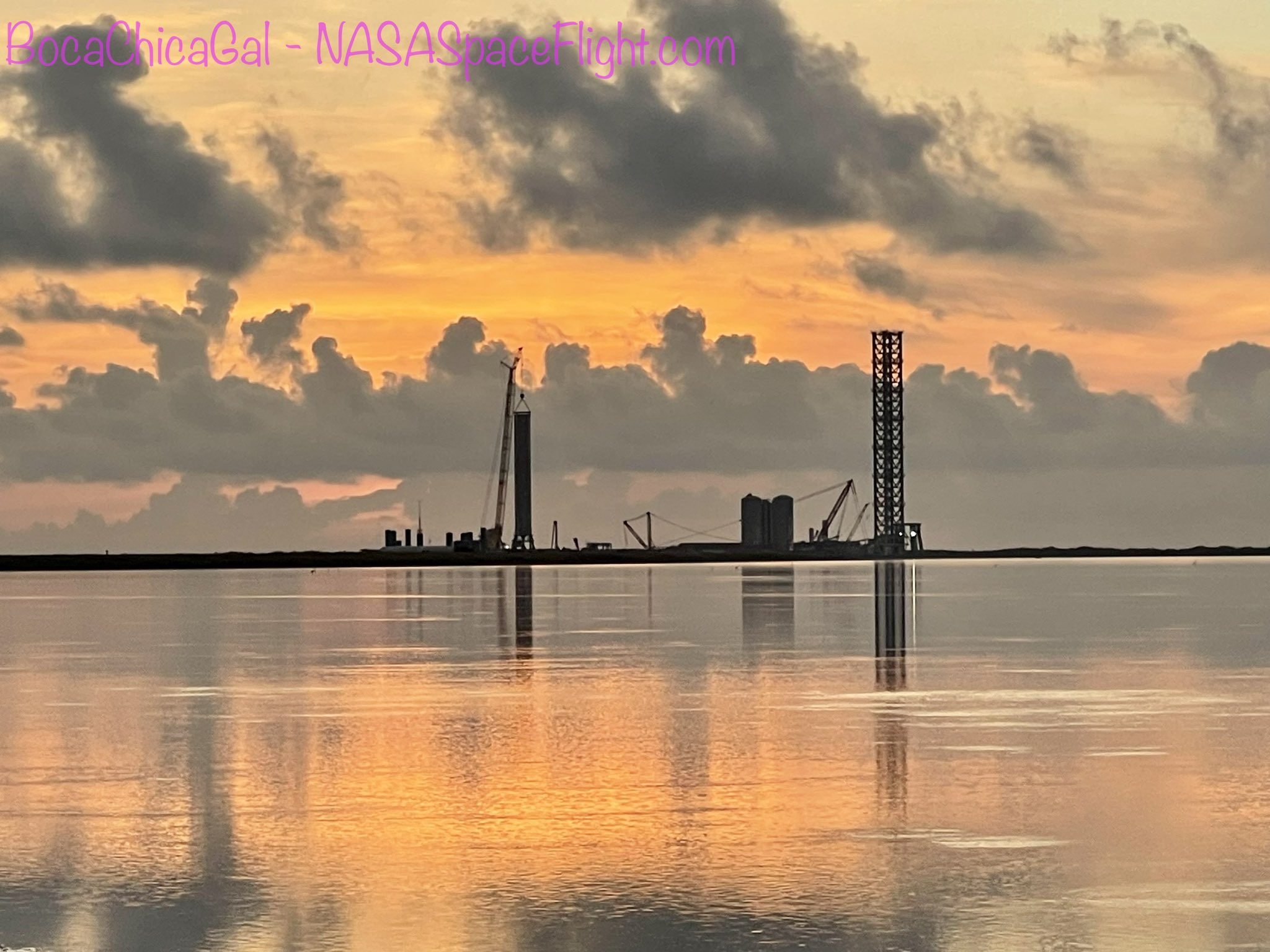 Booster 3 on its test stand at Starbase, Texas, as the Orbital Launch Tower continues to rise. (Credit: Mary @BocaChicaGal for NSF)

If this cryogenic conditioning did not occur, the engines would be cryo-shocked at ignition — with the sudden change in temperatures leading to scenarios from emergency engine shutdown to an engine, or multiple engines, destroying themselves.

This type of thermal control is not optional for the Raptor design, and such a vent is expected with Booster testing as well — likely with similar timing as engine thermal ignition requirements do not change from Ship to Booster.

This will largely be the vent to watch for in terms of predicting a targeted T0 time.  The only thing that is uncertain might be the position and number of the vents as the Booster will have 33 engines to thermally condition in comparison to Ship’s three sea-level optimized Raptors.

Since the engines of Super Heavy are not covered in a skirt for an orbital launch, they might not need to purge the gas out of the sides of Super Heavy, and can just vent it out of the bottom.  It would not be unexpected to see a multi-vent at the bottom of the vehicle.

At T-25 seconds, the quick disconnect umbilicals separated from Ship.  With the ground lines no longer attached to the vehicle, a quick pulse vent was always seen through the same vents as the engine chill occurred.

Rough math from the @NASASpaceflight stream but these vents are absolutly massive. Thanks to @thejackbeyer I measured a bit and they seem to be as long as 15ish meters. pic.twitter.com/AIUUjEobyT

If this remains the case, the Booster vent would likely come from the bottom of the vehicle where the engines are expected to vent during chilldown.  Seeing this clearly will likely still be possible as long as day-of weather conditions are favorable (i.e.: winds that clear the vented gas to allow a view of the engine section).

However, if the Booster behaves differently at quick disconnect separation, not seeing this vent might make it hard to predict the final seconds of the countdown.

Other potential indications of an imminent ignition — should this vent not take place — would likely be the start of the water deluge system to provide acoustical protection to the ground and vehicle systems at engine start and during the test run.

With all these indicators from Starship, there is also the possibility that we might see new and different signs appear for the booster. The countdown could change completely, as SpaceX have changed the flow of the countdown before. However, knowing the Starship countdown milestones will certainly help us come to understand the pre-launch sequence of the most powerful rocket booster of all time.