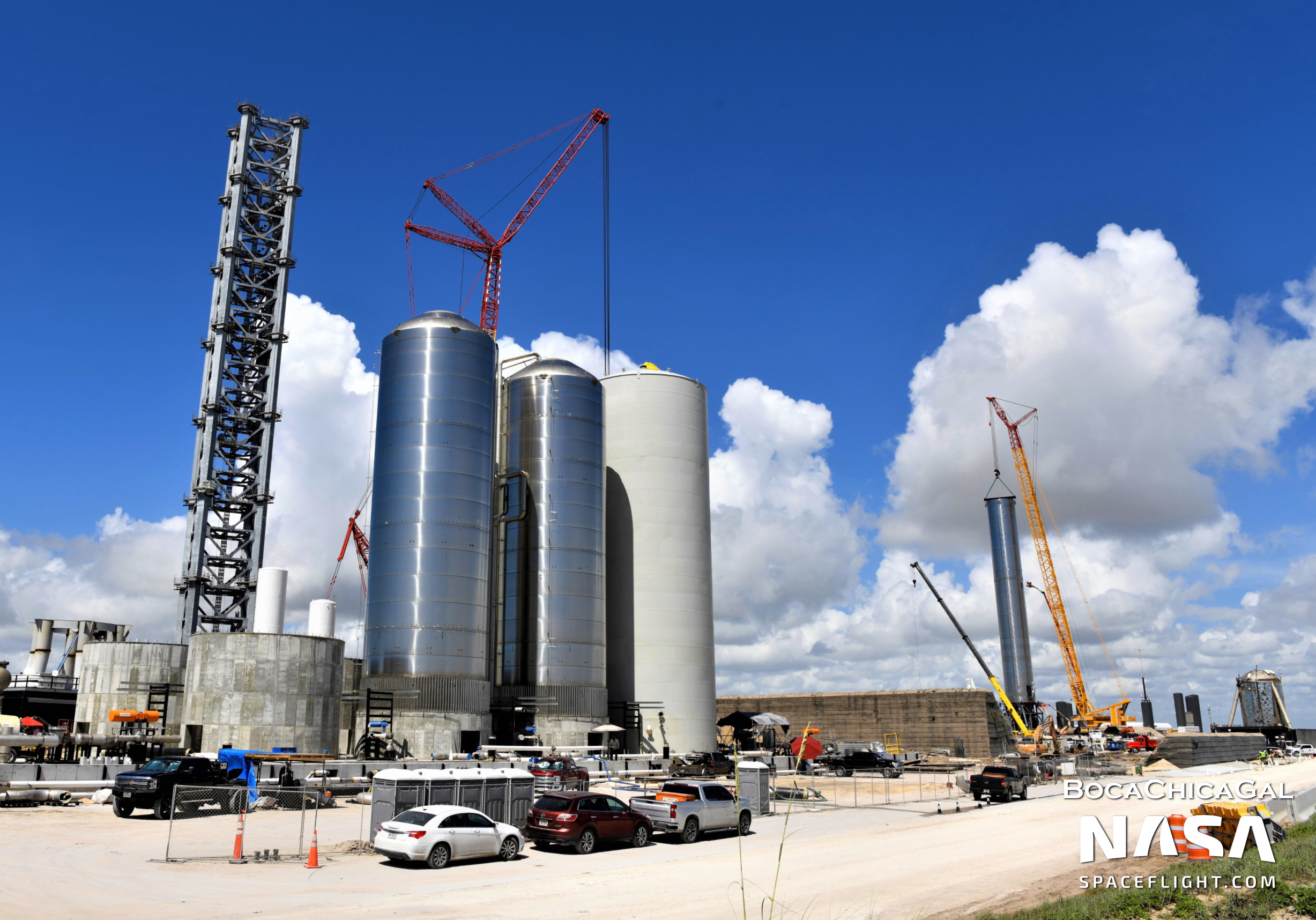 Following a test campaign focused on SpaceX’s Starship vehicle, the Super Heavy booster is now taking up the mantle of testing at the Starbase launch site. Booster 3 rolled out of the High Bay on Thursday, taking the trip down Highway 4 before being placed on suborbital Pad A’s modified mount for a series of ground testing objectives.

The tests will pave the way for Booster 4, already in the opening stages of stacking in the High Bay, which will be hosted at the under-construction Orbital Launch Site (OLS) with Starship 20 for a full-stack ride into space later this year.

Preparations ahead of a Super Heavy booster test campaign initially involved the potential of a 150-meter hop. However, this since-canceled goal was cited ahead of the vigorous Starship test campaign that eventually resulted in a fully successful test flight with SN15 (Ship 15).

BN1 (Booster 1) became the first Super Heavy to complete stacking inside the High Bay, with the first sections spotted in late November of last year.

Tagged as a pathfinder, this booster was set to roll out for ground testing. However, an engineering evaluation opted to swap the stacking order of the LOX (Liquid Oxygen) and CH4 (Methane) tankage.

BN1 was eventually rolled out of the High Bay and scrapped.

Booster 3, as it’s now confirmed as being called thanks to the latest tweet from Elon Musk, is built from sections labeled BN3, using the modified stacking order of the tankage.

The completion of the stacking process, aided by the new Bridge Crane in the High Bay, began on May 15, before being readied for rollout six weeks later.

The roll down Highway 4 was in itself a first-time pathfinder operation, which was ably completed without issue atop the Self-Propelled Modular Transporter (SPMT).

Arriving at the suborbital launch site, the booster was hoisted onto a modified mount on Pad A. It is set to undergo ground testing that is likely to focus on proof testing and cryo proofing, not dissimilar to that conducted on the BN2.1 Test Tank.

BN2.1 has since completed its own test series and departed the launch site on June 25.

No Raptor engines have been installed on Booster 3. However, Mary’s (@bocachicagal) photos provided insight into the engine placement on the vehicle’s aft, which will eventually host 29 engines during a launch campaign using a future booster. 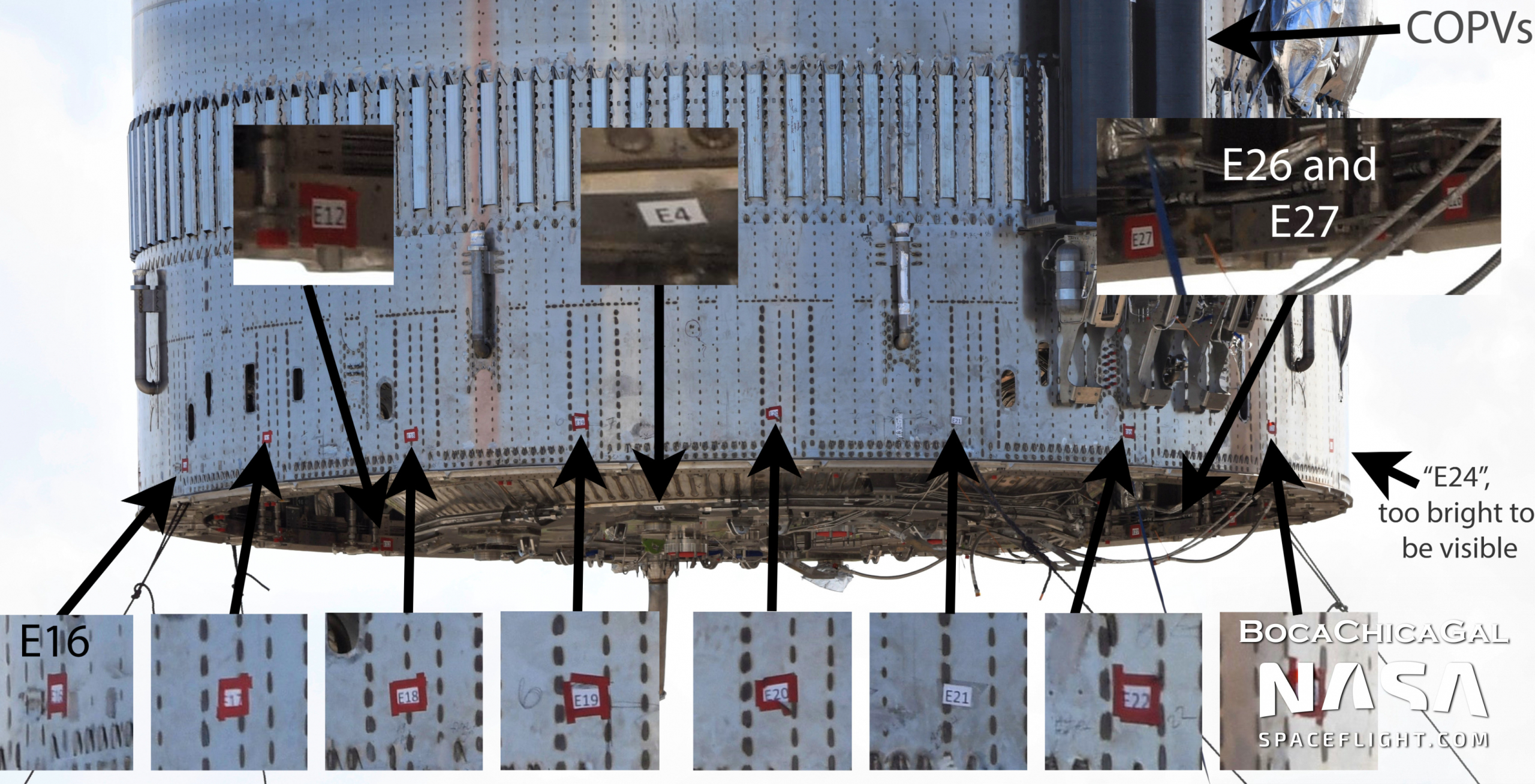 The aft of Booster 3, via Mary (Bocachicagal) for NSF with annotations by Harrison Campbell

The launch of the first Super Heavy is now targeted to use Booster 4, which will soon begin stacking inside the High Bay.

New Super Heavy sections have been spotted in the staging areas around the Production Site, including an aft skirt of a Starship and the forward section of a booster, likely testing the separation system that will be required during Booster 4 – and presumably Ship 20’s – orbital test attempt.

However, an actual section of Booster 4 has been spotted, with the Common Dome section rolled outside ahead of stacking operations in the High Bay. 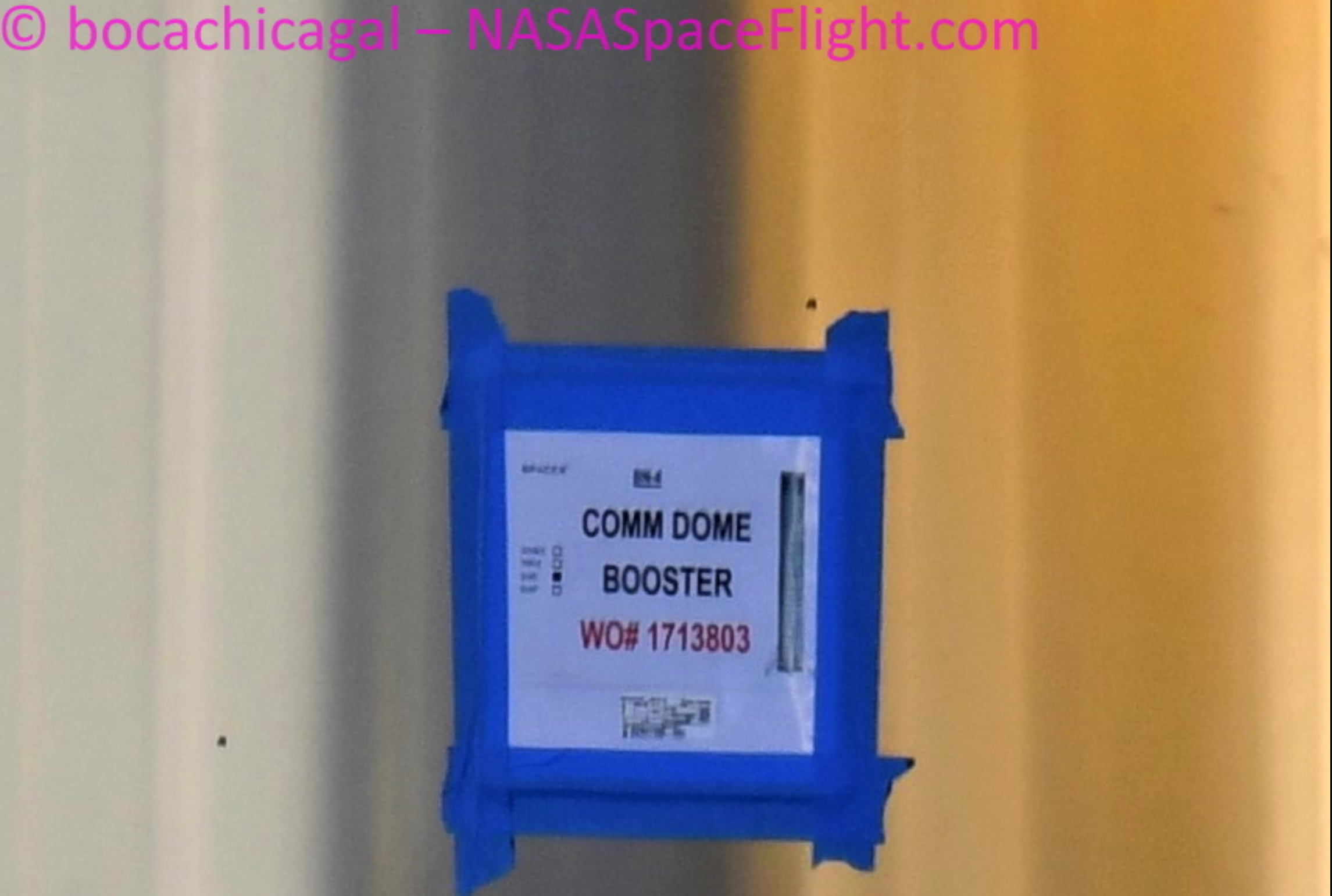 Booster 4 section outside, as noted by the label spotted by Mary (@bocachicagal) for NSF.

On Saturday, the first Booster 4 section was moved into the High Bay to begin the pre-stacking process.

At the same time, sections for Ship 20 have started to gather outside the Production Tents, as they also begin the process of preparing for stacking. That processing will take place in the Mid Bay before undergoing nosecone mating in the High Bay – a facility capable of hosting both a Starship and Super Heavy stacking flow.

Even a Thrust Dome for Ship 21 was seen this weekend, once again portraying Starbase’s production cadence of preparing multiple future vehicles simultaneously.

And wow, that'll actually be Ship 21's Thrust Dome. Very Starbase of them to be working on multiple future vehicles at the same time.

As per Ship 20’s flight on Booster 4, when the orbital launch attempt was first mentioned in SpaceX documentation back in March, the “July” target appeared overly ambitious.

While SpaceX President Gwynne Shotwell once again referenced July was still the target just last week, Elon Musk himself tempered the expectations by noting July may be a more realistic date for the actual first stacking of a Super Heavy and Starship, as opposed to the test launch itself.

“There is the internal goal if things go right, which needs to be aggressive. Obviously, some things will not go right internally & there will be external issues too,” he said, in response to NSF’s Michael Baylor.

“That said, I think we can stack an orbital ship on an orbital booster in July.”

There is the internal goal if things go right, which needs to be aggressive. Obviously, some things will not go right internally & there will be external issues too.

That said, I think we can stack an orbital ship on an orbital booster in July.

An interim hypersonic flight with the unused Ship 16 – currently keeping the flown Ship 15 company at the Production Site – has not been mentioned since Elon Musk noted it could be an option.

Notably, the requirements of completing the Orbital Launch Site (OLS), as opposed to the readiness of the vehicles, is understood to be the key scheduling item, with the huge Launch Tower rising further into the sky last week, with the sixth and seventh sections added. 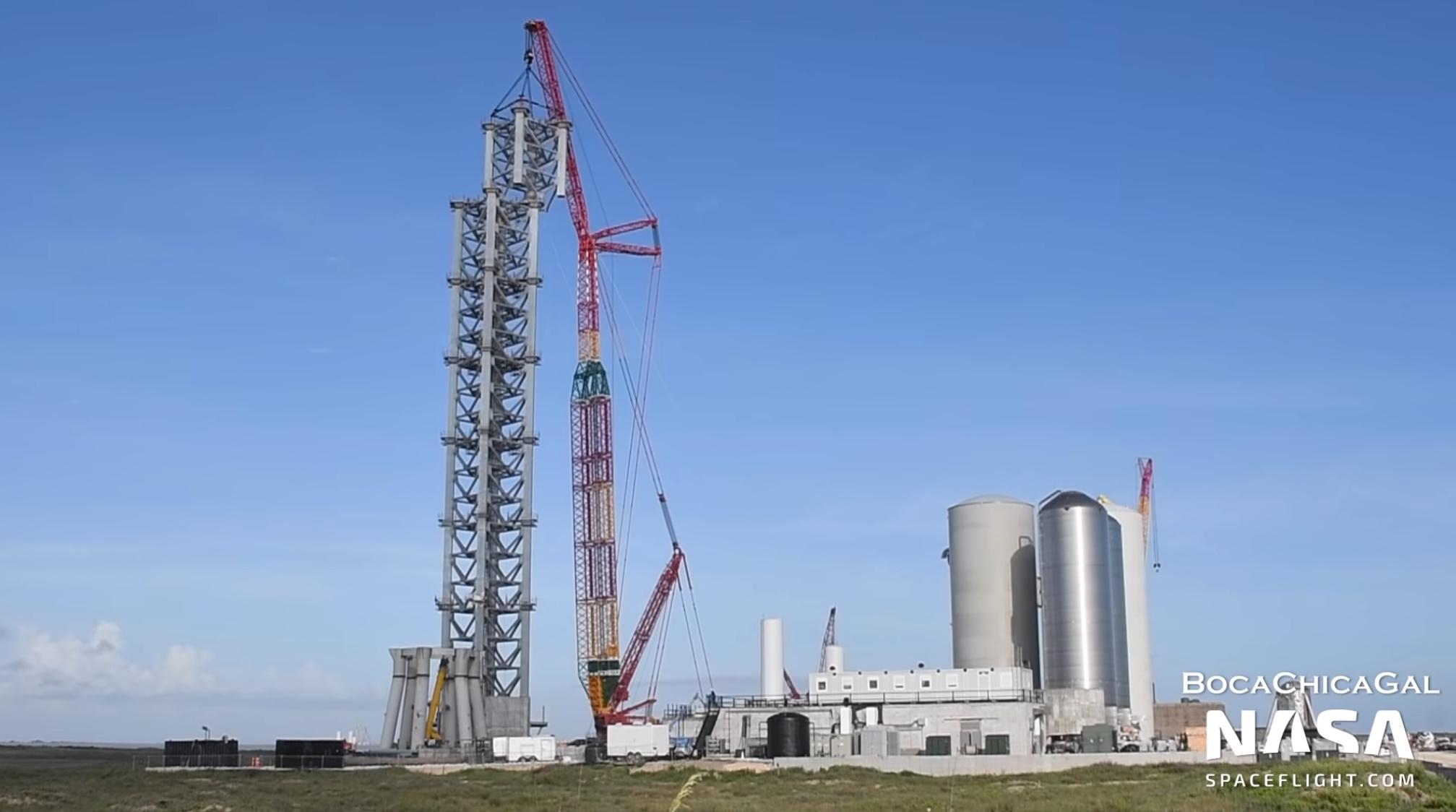 It will eventually host eight sections, with a crane and lightning protection tower atop. The eighth section is currently under construction.

A potential issue towards the readiness of the OLS may be the Ground Support Equipment (GSE) tanks that are required to provide the propellants for the thirsty Super Heavy and Starship stack at the OLS.

Lately, observations have pointed to a potential issue with the GSE tanks, with SpaceX engineers cutting open GSE4. It will be a watch item to see if some of the previously constructed tanks go back to the production site for repair work or reconstruction. 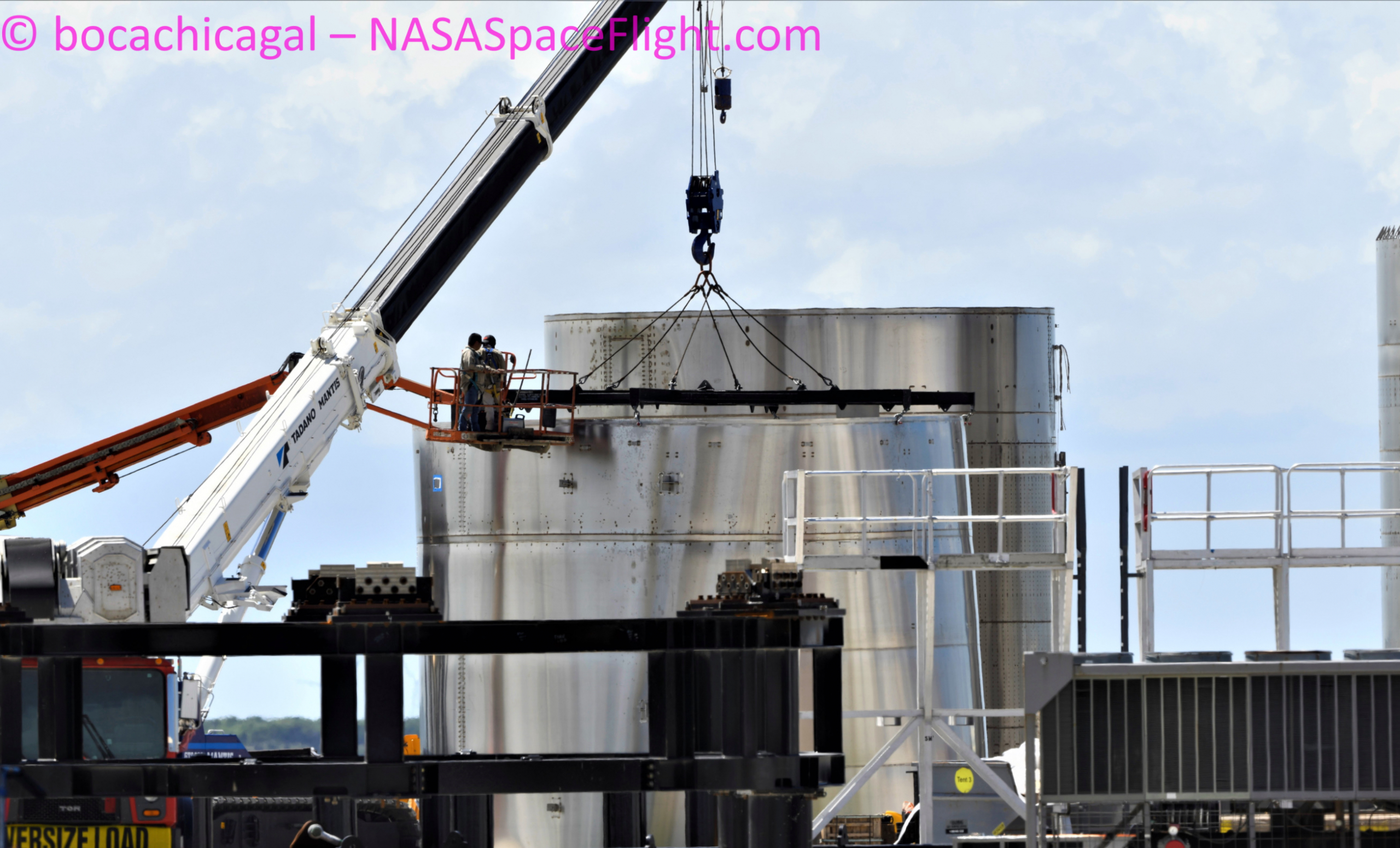 GSE4 being scrapped – via Mary (@bocachicagal) for NSF

While SpaceX works on closing all of the required items to allow for the milestone orbital attempt, a sign of the test approaching was evident with the arrival of a Raptor vacuum engine, captured by NSFs Tyler Gray.

The upper stage will use three of these engines with the monster nozzle.

It is! Looks like we can get 378 sec Isp with this version of Raptor Vacuum, so over 380 sec with some improvements down the road.

Citing Tyler’s photo, Elon Musk updated the performance of the new engines, citing the RVac achieved an ISP of 378, and SpaceX hopes to increase that number to 380 further down the road.

Starbase also saw the delivery of the initial RBoost Raptor engines, which will make up the majority of the engines on the Super Heavy booster. They will provide improved thrust but no gimbal capability.

From a paperwork standpoint, SpaceX is still waiting for the final go from the FAA to perform the orbital launch and the environmental authorities to provide approval to launch Super Heavy from Boca Chica.

In the meantime, SpaceX is still pushing through numerous Raptors from its Hawthorne Production facility, through testing at McGregor, ahead of making the final road trip to Starbase. 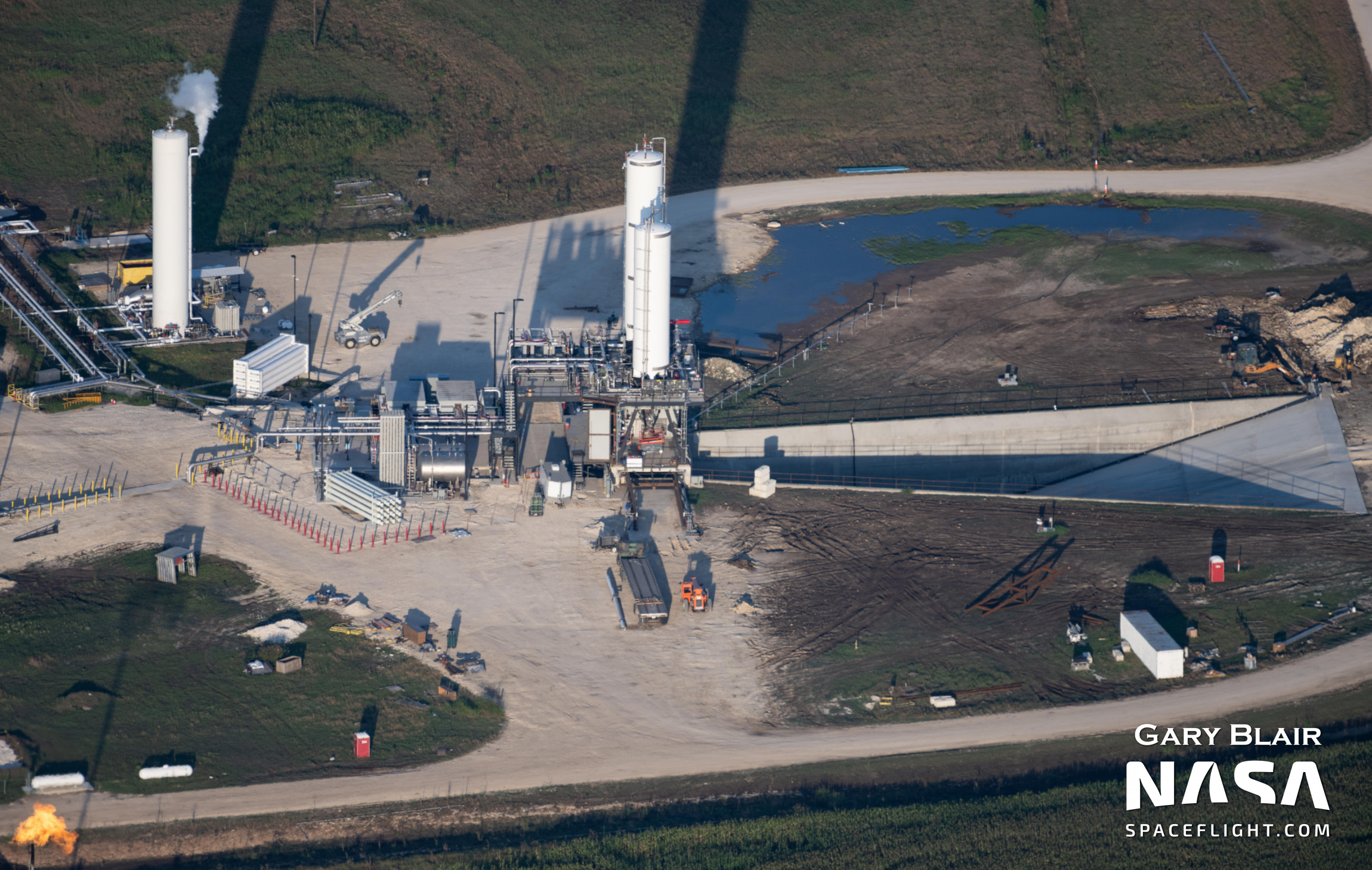 The new Raptor test stand with another new Raptor in view via Gary Blair for NSF/L2.

This, in turn, allows for shipments of up to three Raptors at a time to Starbase, as observed last week.

The stock of Raptors required for the upcoming orbital attempt is likely not the bottleneck to being ready for launch.