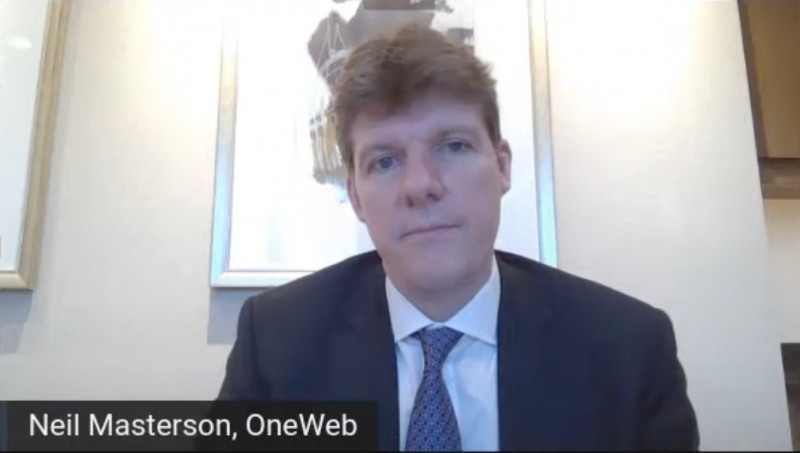 Masterson came to the satellite industry from Thomson Reuters, which sells software and tools for legal and tax professionals, and the news service Reuters. He joined OneWeb in November when it was brought out of Chapter 11 bankruptcy under the ownership of the U.K. government and Bharti Global.

“In some ways, I come to this with a degree of humility, I don’t have a lot of depth in the engineering,” Masterson said. “But I can smell a strong B2B opportunity when I see one. The more I learned about it, the more excited I got about the opportunity. Candidly, the shareholders were key to getting me across the line, given the expertise they have.”

Masterson provided an update on OneWeb’s progress in building out its initial constellation of 720 satellites by the middle of 2022. OneWeb is currently in a “Five to 50” program — a five-launch stretch that will bring connectivity to all regions north of 50 degrees latitude by the middle of 2021. Masterson confirmed OneWeb plans for three more launches by the end of June, and a total of 10 launches in 2021. Global coverage is targeted for the end of 2022.

The company is seeking another $1 billion to fully fund the first generation constellation and Masterson said he is “ very confident” on that front. He pointed to the $1.4 billion that OneWeb has raised since the U.K. government and Bharti Global brought the company out of bankruptcy with a combined investment of $1 billion. The new funding includes investors Softbank and Hughes Network Systems.

When asked how he will compete with industry titan SpaceX and its Starlink constellation, he stressed that SpaceX’s initial direct-to-consumer approach is not the strategy, and OneWeb’s strategy is to partner with local telcos and ISPs, who are serving the customers and know price points. OneWeb looks to help telcos serve their customers better.

“We think the best way to meet end users and customer needs is by the existing telco industry, Internet Service Provides and so forth. That’s how you maximize your footprint across those end users because you’ll reach many more people and lift them up,” he said.

Masterson talked about OneWeb’s approach to user terminals as well. For community broadband, he said OneWeb will have a single terminal that costs around $6,000 that can cover a village or site such as a hospital. There will also be a compact Electronically Steered Array (ESA) priced around the cost of an iPhone (different current iPhone models vary in price from around $600 to more than $1,000). The operator has a deal with Satixfy to build a LEO/GEO terminal for aviation, and another with Intellian to build terminals of various sizes for various use cases.

He said he is optimistic on price developments for user terminals. “The volumes of samples that we are seeking to put in the field are such that scale will start counting, and that we should see improvements in economics. We will be very focused on improving the economics of the user terminals, because we think that’s the way to broaden the size of the market and to drive market penetration,” Masterson said.

The size and application of OneWeb’s constellation has gone through fluctuation, and applications including Position, Navigation, and Timing (PNT) have been floated. In terms of the second generation, Masterson said he wants to hold off on making any decisions in order to hear more from OneWeb customers, and their needs will determine the specifications of the second generation.

“I really want to hear more from our customers about what they want, because that will determine the precise specifications of whatever we build. There are a number of directions we go, we can kind of more or less meet any use case. The question is — What are the use cases people actually want?”