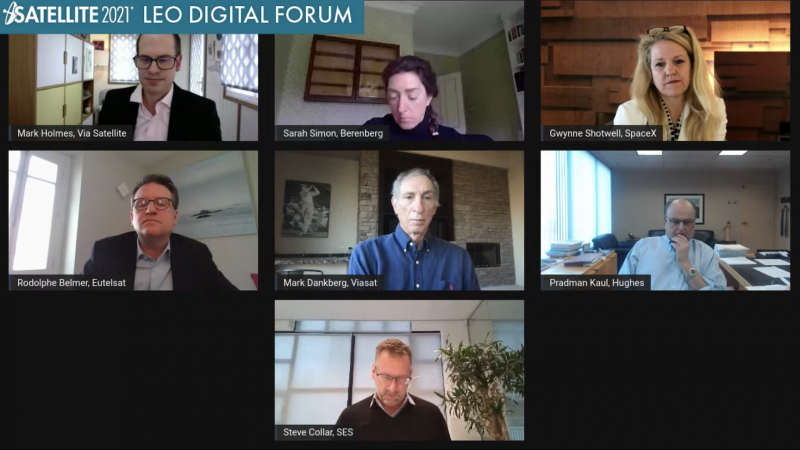 Top satellite operators during a virtual panel during the LEO Digital Forum on April 6. Via Satellite screenshot.

Competing with SpaceX‘s Starlink constellation drove the wider discussion during the “New World Order” panel at the SATELLITE show LEO Digital Forum, as satellite operators pushed their multi-orbit strategies and emphasized the stability of GEO in a virtual discussion on the future of the industry.

During the morning’s keynote, Telesat CEO Dan Goldberg said he saw the Lightspeed LEO constellation as a move the Canadian operator had to make. But the larger discussion made it clear that other major operators don’t see it the same way.

While SpaceX COO Gwynne Shotwell provided an update on Starlink, forecasting that the constellation will be able to connect 20 million households in rural America in three to five years, Eutelsat CEO Rodolphe Belmer and SES CEO Steve Collar shared skepticism that LEO broadband is a mass market in the way that satellite video is.

Collar, who said that the size of SES’s business is shifting to 50/50 between Networks and Video, driven by a growth in Networks — still pointed to the enormous video market.

“We carry more video content to more people on the planet than any other company. If SES didn’t exist, 360 million households wouldn’t get video on a daily basis. There’s not a single telco on the planet who can say the same thing, let alone if we compare that to satellite internet,” Collar said. “Even in our wildest and most successful versions of what a future LEO constellation might look like … it certainly doesn’t run to the billions.”

Belmer emphasized that Eutelsat believes satellite television will be critical video infrastructure for the foreseeable future and video traffic is not threatened by LEO developments.

“When we try to calculate what’s the production capacity of all the LEO constellations, we see absolutely no way, no possibility that those Low-Earth Orbit systems can fulfill demand,” he said. “Geostationary satellites [are] by far the most cost effective, the most practical solution for broadcasting linear content. And, you already have billions of people in the world equipped to receive television with dishes — the equipment is there.”

But Shotwell left the door open on any future technology applications from LEO.

“I just always smile when people make projections about what can and can’t be done with technology,” she said. “I don’t think we have any idea how technology can evolve.”

Viasat and Hughes Network Systems, which will directly compete with Starlink for rural broadband subscribers, pushed their multi-orbit approach and the benefits of GEO.

For Hughes, that’s its investment in the OneWeb LEO constellation to augment its GEO coverage. But Hughes President Pradman Kaul also pointed to ongoing work to integrate with 5G standards, so that future satellite networks can more easily integrate into the greater telecoms ecosystem.

“One of the areas [of opportunity] is to make these networks have a hybrid architecture, such that you could combine terrestrial and satellite applications in under one network architecture. I think the 5G standards give us an opportunity to do that,” Kaul said. “If that develops well, our ability to integrate into the telecom ecosystem will be significantly enhanced.”

Viasat believes the economics of broadband strongly favor GEO, Executive Chairman Mark Dankberg said. But the operator will look to augment its coverage with Non-Geostationary (NGSO) satellites over the poles.

As the number of satellites in LEO increases nearly every month, Dankberg strongly emphasized the dangers of orbital congestion and the responsibility that satellite operators have to keep space usable.

“In GEO, it’s definitely possible that everybody can put up their own constellation, and they can’t crash. They’re separated, they’re all going in the same direction at the same speed, and they don’t interfere with each other as long as they stay in their slots,” Dankberg said. “But in the non-GEO space, every constellation can literally crash into every other one, or can interfere with every other one. The way those rules evolve, will have a huge impact on what any we or anybody does in NGSO.