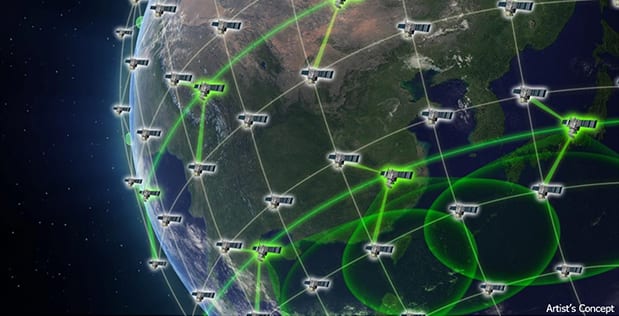 An artist’s concept of the Blackjack constellation. Photo: DARPA

Blue Canyon Technologies (BCT) has been awarded a Phase 3 Defense Advanced Research Projects Agency’s (DARPA) contract to develop an additional six satellites for the Blackjack program. The company announced the award on Wednesday. A BCT spokesperson told Via Satellite this contract is worth $26.5 million.

Blackjack is a DARPA program to leverage commercial Low-Earth Orbit (LEO) broadband technology for a global high-speed network for the U.S. Department of Defense (DoD) that can incorporate short design cycles and frequent technology upgrades.

This latest contract follows after BCT and DARPA completed the bus’s Critical Design Review in late 2020. BCT is currently building the first four satellites to be delivered by the close of 2021, under a $14.1 million contract won in July 2020. That contract came with a potential value of $99.4 million, and this additional $26.5 million contract is part of that award.

To support DARPA’s demonstration schedule, the company plans to deliver the additional six satellites by the close of 2022.

BCT’s design for DARPA is based on its multi-mission X-SAT bus. Michelle Narciso, BCT program manager, previously told Via Satellite that BCT expanded the capabilities of the bus to support the broad set of missions for Blackjack, including more power, and the ability to support higher orbit ranges.

“We’re demonstrating an economy of scale previously unheard of for national security space assets, and we’re proving it can be done on a rapid schedule,” George Stafford, co-founder and CEO of Blue Canyon Technologies commented in the Wednesday release. “Blackjack will deliver persistent coverage in Low-Earth Orbit that’s resilient by numbers.”

BCT is now a wholly owned subsidiary of Raytheon Technologies.