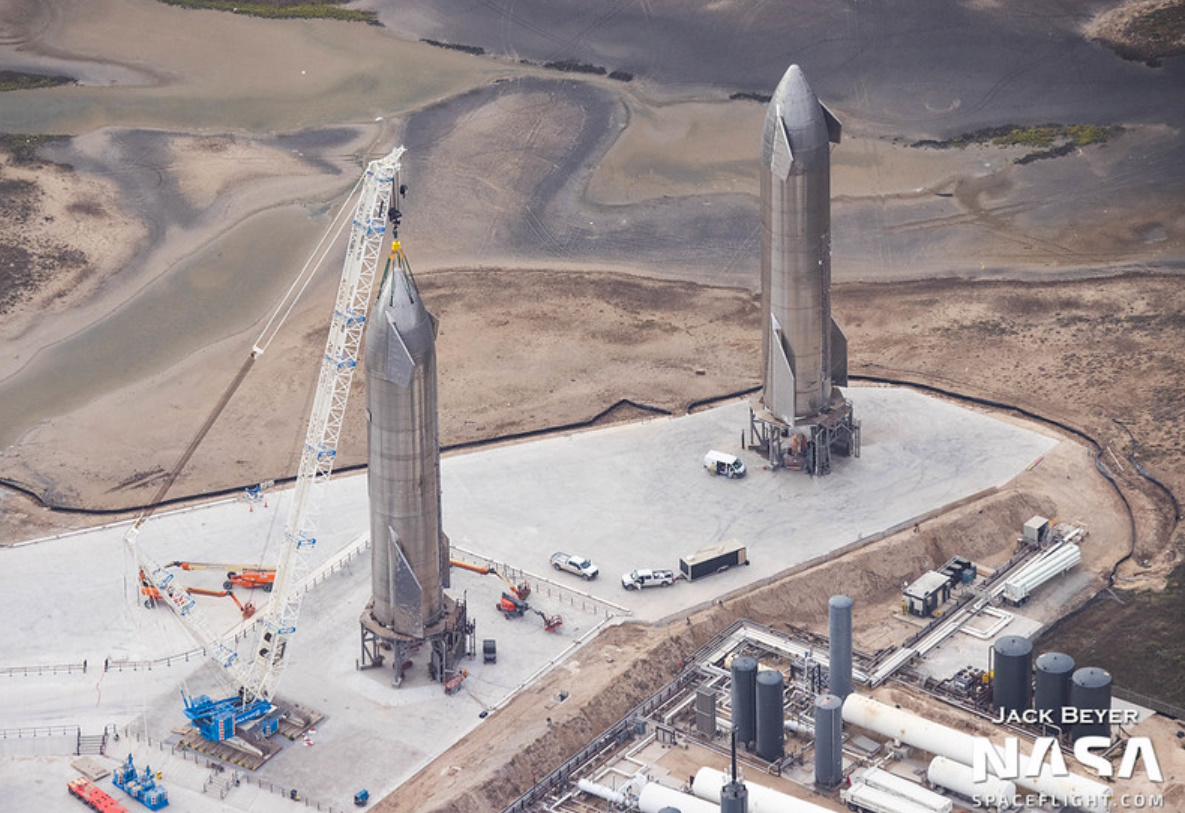 Starship SN9 has finally received a GO for her test flight, with launch set for Tuesday. Although the overall schedule delay is relatively short, pent-up production cadence saw SN10 jump at the opportunity to roll down Boca Chica’s Highway 4 late last week.

This event marked the first-ever dual prototype Starship pad flow, with SN9 on Pad B and SN10 on Pad A.

From a technical standpoint, Starship SN9 was ready to make her leap into the South Texas sky last week, only to be denied by paperwork.

The requirement of FAA clearance to conduct the test scrubbed the launch into this week, leaving Starship’s army of fans on social media nonplused as to why the FAA was struggling to sign the permit.

This became the angle of media reporting, feeding off Elon’s tweet of frustration after the January 28 scrub was called.

Unlike its aircraft division, which is fine, the FAA space division has a fundamentally broken regulatory structure.

Their rules are meant for a handful of expendable launches per year from a few government facilities. Under those rules, humanity will never get to Mars.

However, as noted in Eric Berger’s informative article – which also cited an investigation into the extended evaluations – the FAA was always unlikely to be swayed by tweets and media reports.

Also, it was already known that new administrative improvements are already in the pipeline, as noted by Jeff Foust of Space News. Such streamlining raises hope that testing in the long-term will avoid FAA-related schedule impacts.

In preparation for an expected conclusion to the FAA’s deliberations, SpaceX has filed for launch opportunities through a three day period this week.

Temporary Flight Restrictions (TFRs) were published for Tuesday, Wednesday, and Thursday. However, such TFR notices can be canceled at short notice, as observed during last week’s scrubs.

According to the Washington Post’s Christian Davenport, the test flight’s approval could be received later on Monday.

Very late in the evening on Monday, approval was gained as SpaceX set up preparations for the local area’s population – including Mary (@bocachicagal) to be evacuated on Tuesday ahead of making a flight attempt in the second half of the day.

“The FAA determined late Monday (Feb.1 ) that SpaceX complies with all safety and related federal regulations and is authorized to conduct Starship SN9 flight operations in accordance with its launch license,” noted the FAA in a statement to NASASpaceflight.com’s Michael Baylor.

Pending acceptable weather conditions, SN9’s launch to 10 kilometers will aim to at least match the successes of the SN8 flight, with the ultimate prize being a smooth touchdown on the landing pad.

While expectations should be calibrated with this being just the second high altitude flight of a prototype Starship, the one issue with SN8’s flight – the loss of pressure in the CH4 Header Tank during the landing burn – has since been mitigated ahead of SN9’s attempt.

Some additional pressure will be placed on SN9’s return, with SN10 watching nervously from Pad A.

While SpaceX will have undertaken the obvious risk analysis into launching and landing a Starship next to another Starship on the next-door launch mount, additional confidence was likely gained via SN8’s test flight accuracy.

Despite losing thrust during the landing burn, SN8 managed to place her aft over the landing pad before hitting the concrete with too much velocity.

SN10’s rollout was expected for some days, with the High Bay processing completed once the nosecone was installed along with the associated aero surfaces. The opportunity of utilizing Friday’s road closure – after SN9’s flight was scrubbed – also reduced local disruption.

Little is known per SN10’s flight profile past the obvious near-mirror to the test objectives of SN8 and SN9.

The target altitude could range from between 10 kilometers and 20 kilometers – the latter being the original target of SN8 before forecasted high altitude wind strengths refined the high point of SN8’s leap.

SN10 also has a greater number of TPS (Thermal Protection System) heatshield tiles than SN9, as SpaceX works to gain more data on their performance during launch and landing. 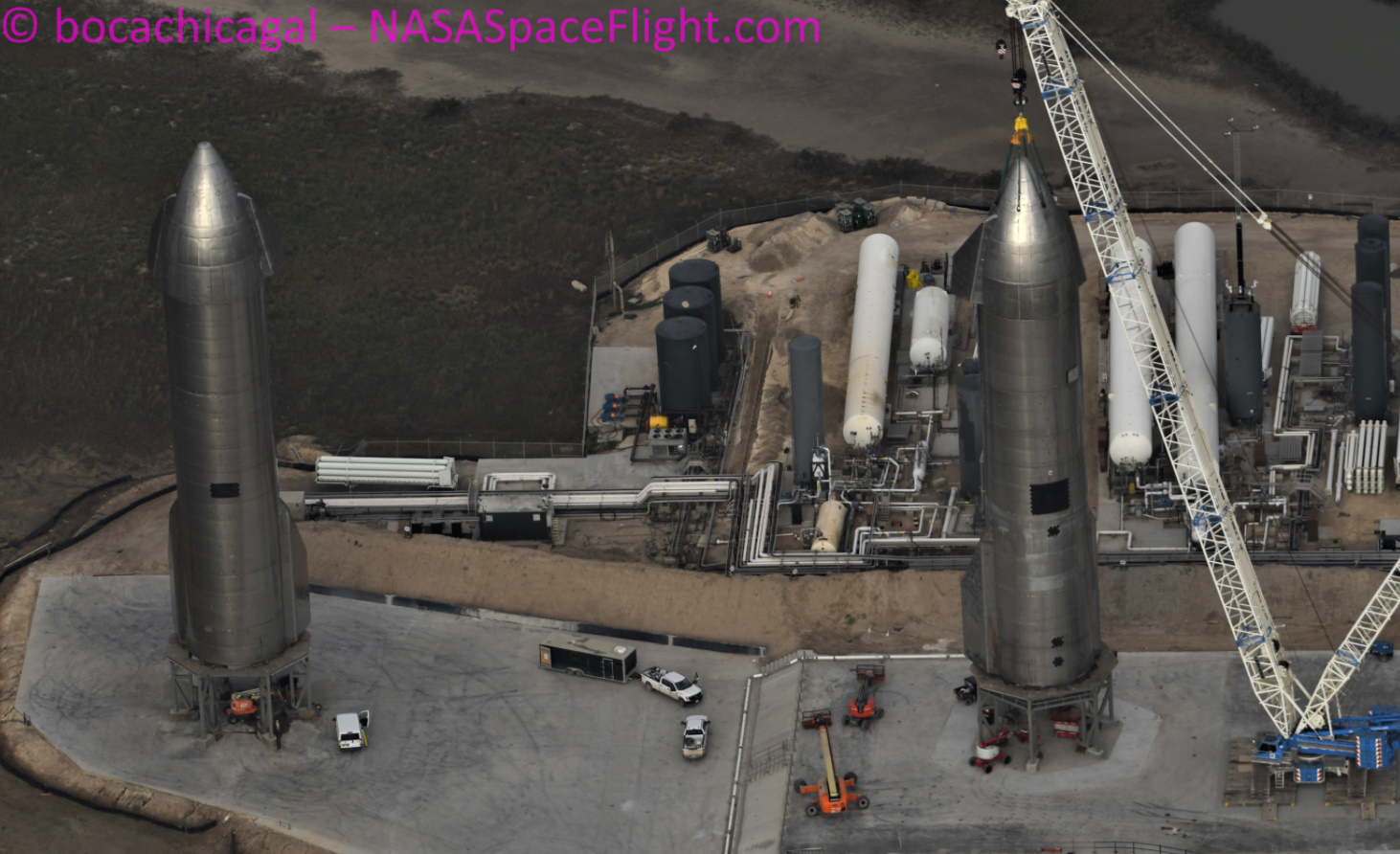 Orbital Starships will re-enter with a full TPS suite on the windward side, while the leeward side won’t require any tiles.

SN10 also rolled out to Pad A before Raptor installation, which will take place after prooftesting. That initial pad flow objective began on Sunday with ambient nitrogen (gaseous), before the cryogenic (liquid nitrogen) testing was set to be conducted on Monday.

Late that day, preparations for Raptor installation was taking place, as SN10 takes the opportunity provided by SN9 continuing to wait for launch.

Starship SN11 has also been waiting patiently for the next step in her processing flow.

Long-since stacked in the Mid Bay, SN11 is expected to make the short trip to the High Bay in the near-term, ahead of receiving her nosecone. 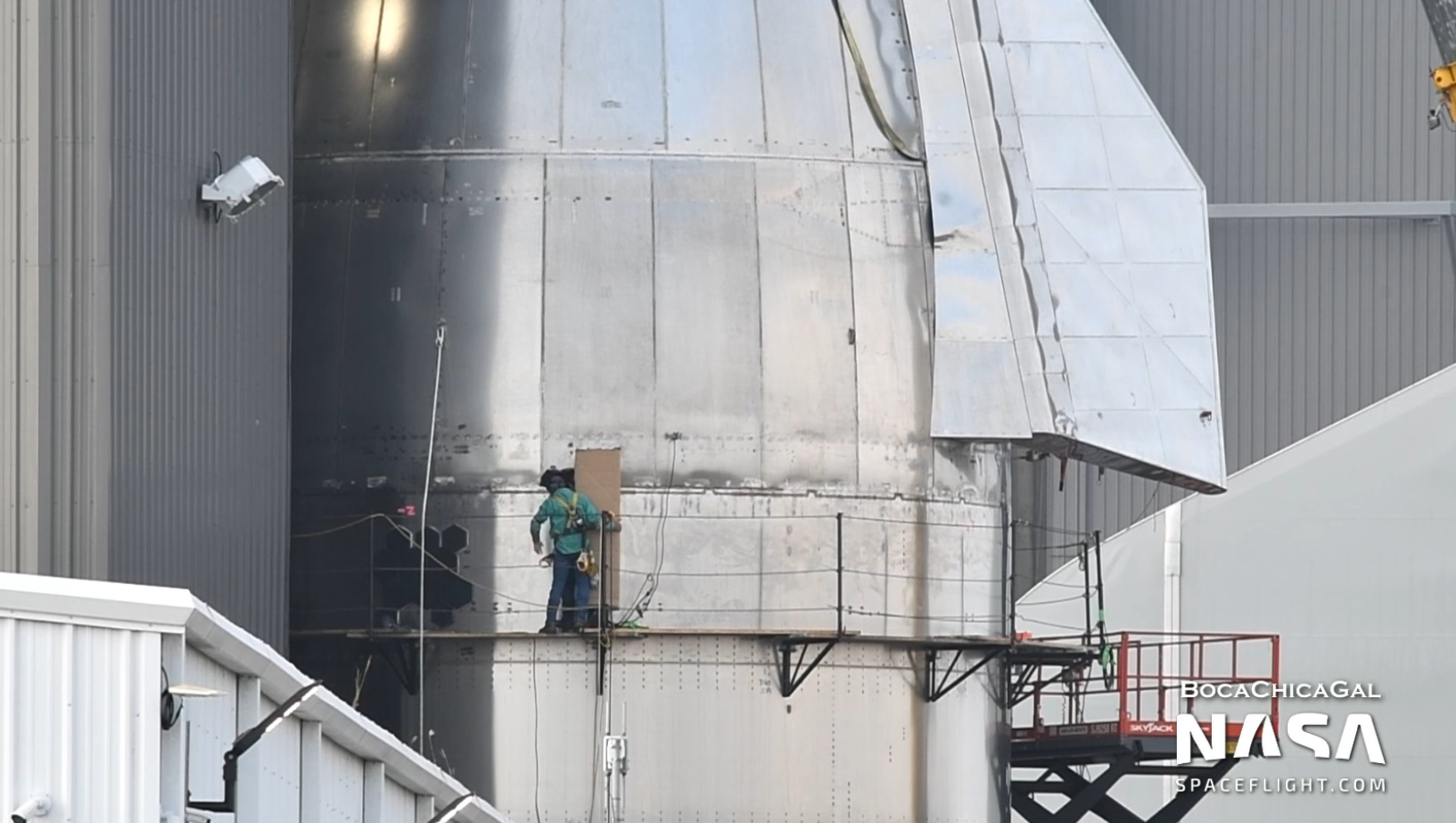 Work on the SN11 nosecone is all but complete, following stacking with its barrel section and installation of aero surfaces inside the Wind Break facility.

SN11’s current next door neighbor inside the Mid Bay is SN15. This advancement to the next evolution with the manufacture of Starship sections was confirmed when SN12’s thrust section was cut apart and dismantled last week.

Sections for SN13 and SN14 were few and far between, as SpaceX opted to push forward with SN15’s flow as the vehicle to follow SN11.

Sections for SN16 and SN17 are also congregating outside the production tents, with the former set to join SN15 inside the Mid Bay in the near-term. 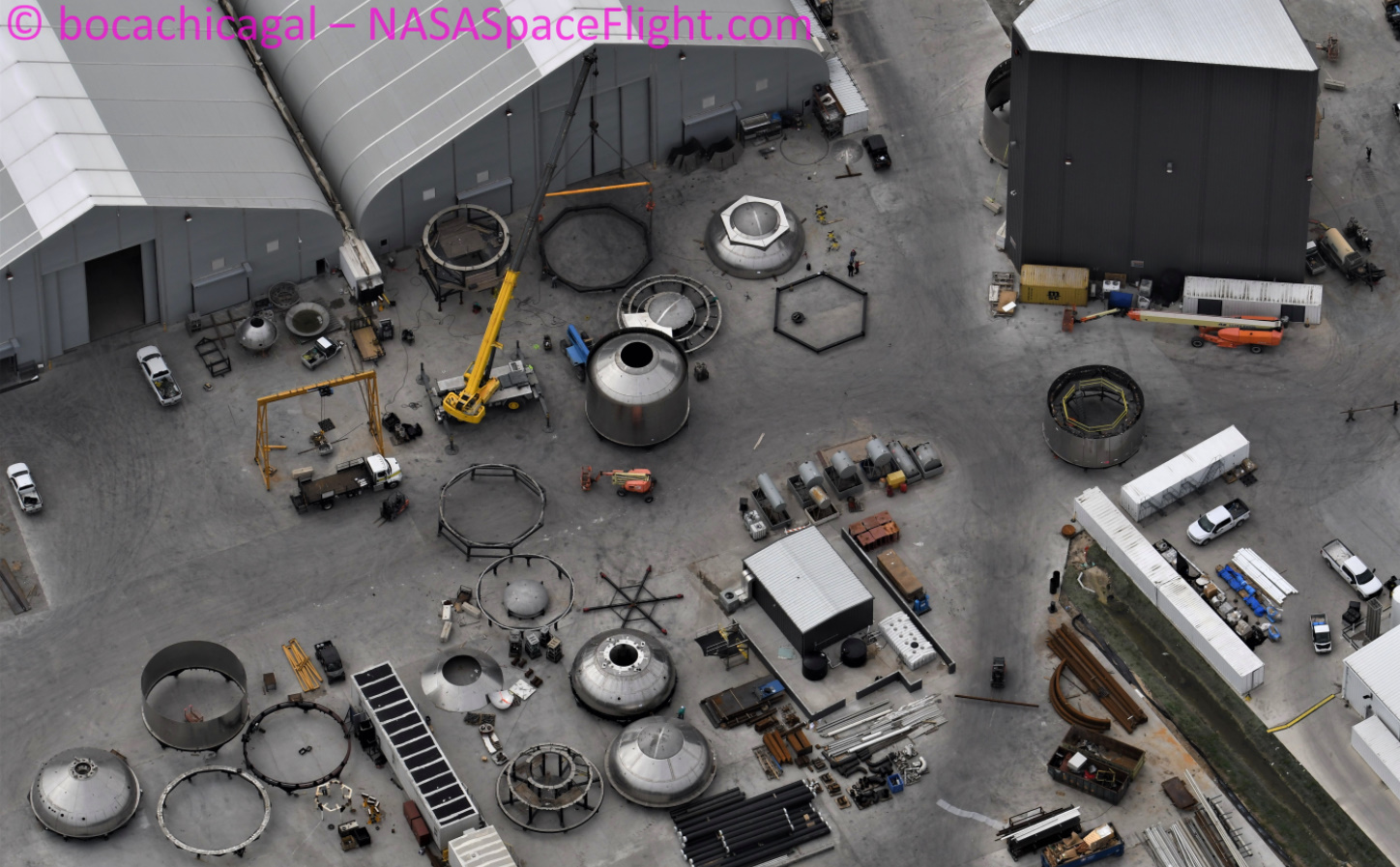 Numerous sections outside the production tents, as observed by Mary (@bocachicagal) during a flyover.

Another reason SN10 rolled out, while SN9 was still waiting to launch, related to clearing space in the High Bay for what was the primary reason for constructing such a tall facility – stacking Super Heavy boosters.

Sections of Super Heavy prototype BN1 (or B1 as some labels denote) are already stacked into the High Bay, with additional progress observed now SN10 has departed to the launch site. 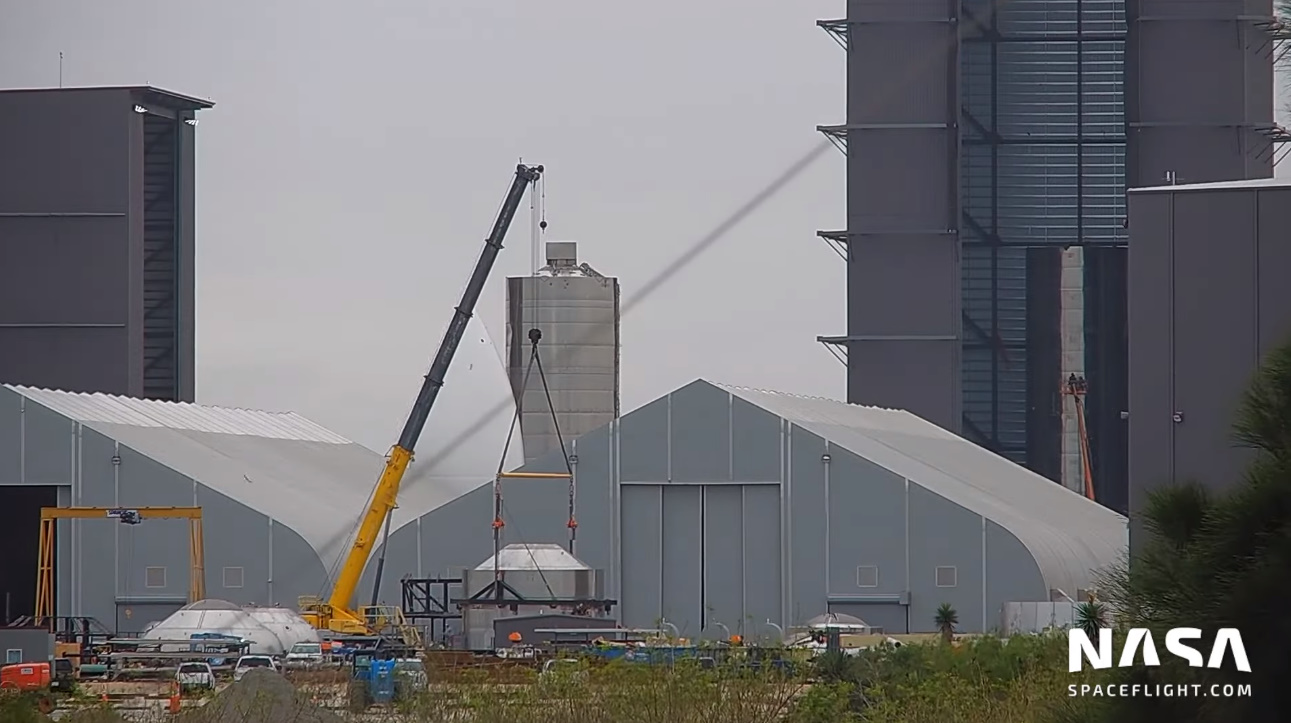 With sections for the second Super Heavy prototype BN2 (or B2) already seen milling around the production facility, the huge booster’s progress is picking up the pace ahead of its test cycle.

Another interesting observation was the Thrust Dome for the BN1, which – per the vent ports – appears to point to the capacity to host four Raptor engines.

While the operational Super Heavy booster will sport 28 Raptors, the initial booster test was – at least of Elon Musk’s last update – to involve two Raptors on a 150-meter hop. However, that update came well before SN8’s impressive test flight, potentially pointing to the advancement of Super Heavy’s objectives.

At present, Super Heavy’s path is largely unknown, not least with a second Super Heavy also starting to sprout sections at the Production Site.

As such, BN1 could be a pathfinder booster designed to test the tankage and shakeout the Ground Support Equipment (GSE). BN1 testing is expected to take place on the suborbital test stand before BN2 undertakes flight objectives. 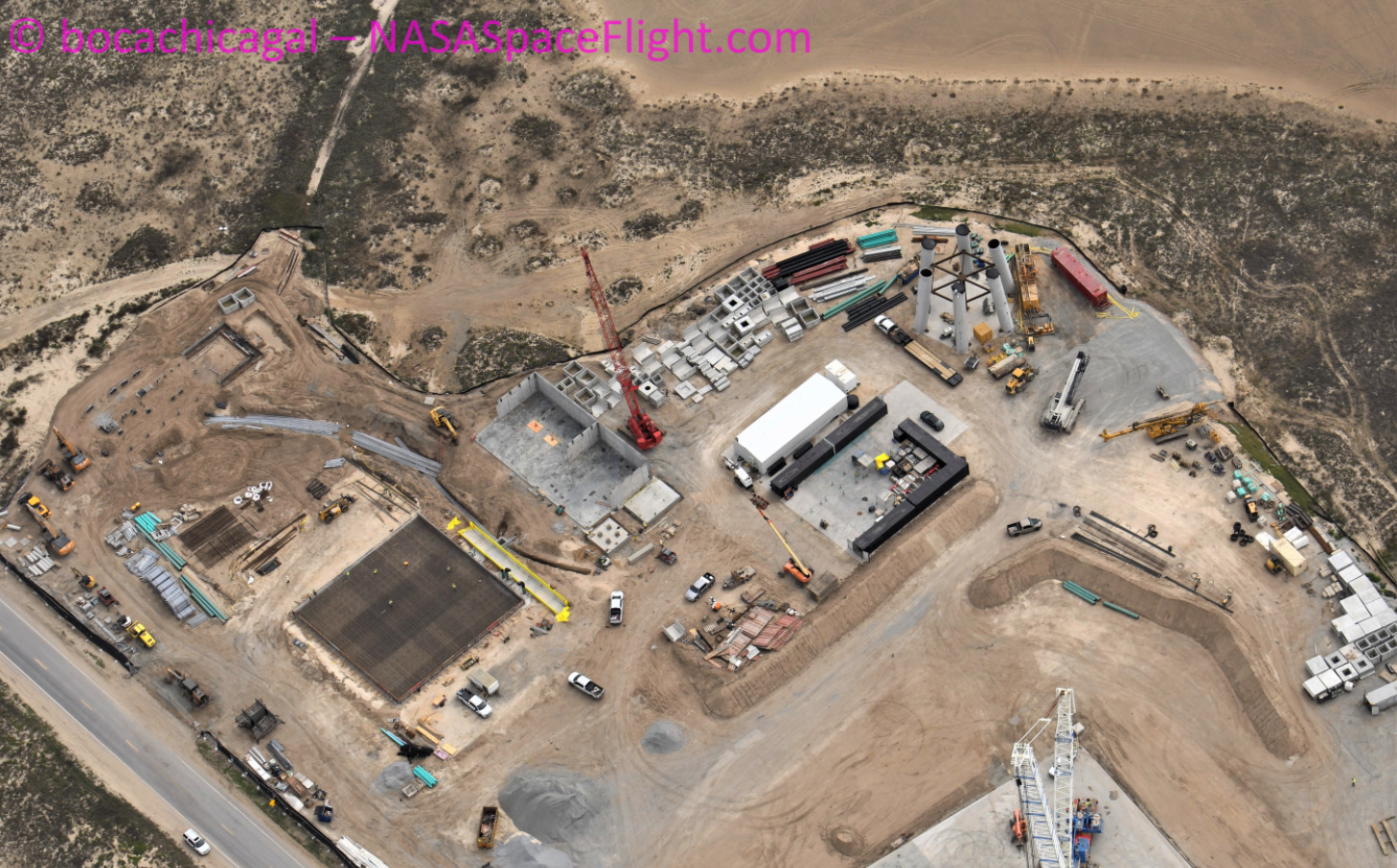 Construction at the Orbital Launch Site – via Mary (@bocachicagal) flyover.

The eventual home of Super Heavy boosters – the Orbital Launch Site – continues to make steady process. This facility is located next door to the suborbital site hosting Starship SN9 and SN10 – along with the recently tested SN7.2 Test Tank and the immortal Starhopper.

A key supply chain for Starship and Super Heavy testing is the Raptor engine.

A steady flow of new engines are making the journey from their production inside SpaceX’s HQ base in Hawthorne, California, before being tested on the three test stands at SpaceX McGregor in Texas.

Notably, new construction points to the potential SpaceX is looking to increase the amount of Raptor test bays at the facility. 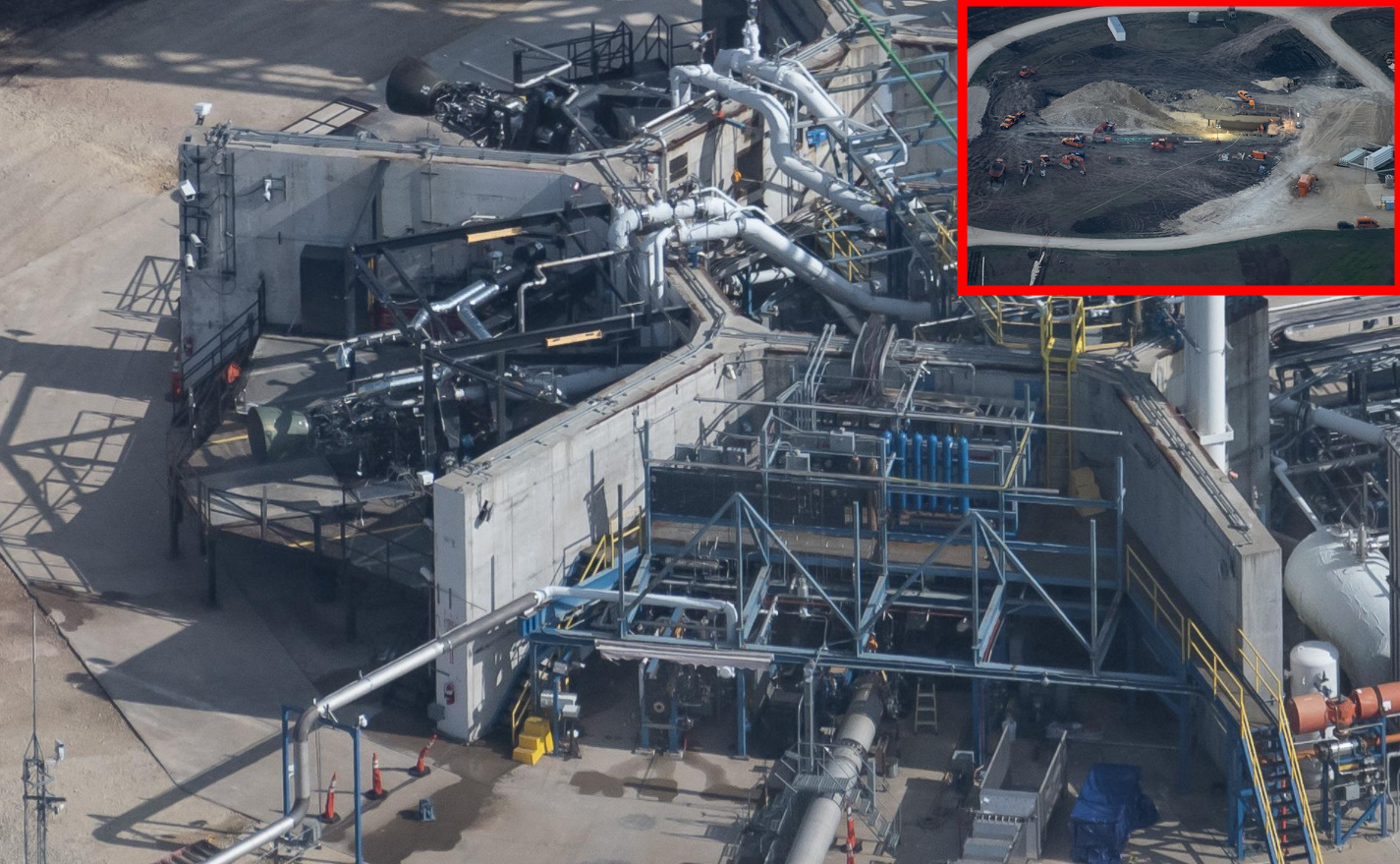 Two Raptors on the Test Stand. Next door construction in the insert – via Gary Blair for NSF/L2

As observed on NSF member Gary Blair’s latest aerial commute past the facility (L2 McGregor), Raptor testing is deep into the SN50 range.

Engines that have been removed from Starships during testing also head back to McGregor for repairs/retesting. It is currently unknown how many flight-ready engines are on SpaceX’s books.

Grab some cool gear along with the ability to support our content: https://www.nasaspaceflight.com/shop/

Tale of Two Starships – Close Up

The post Starships lining up for launch as SN9 gains a go for Tuesday attempt appeared first on NASASpaceFlight.com.