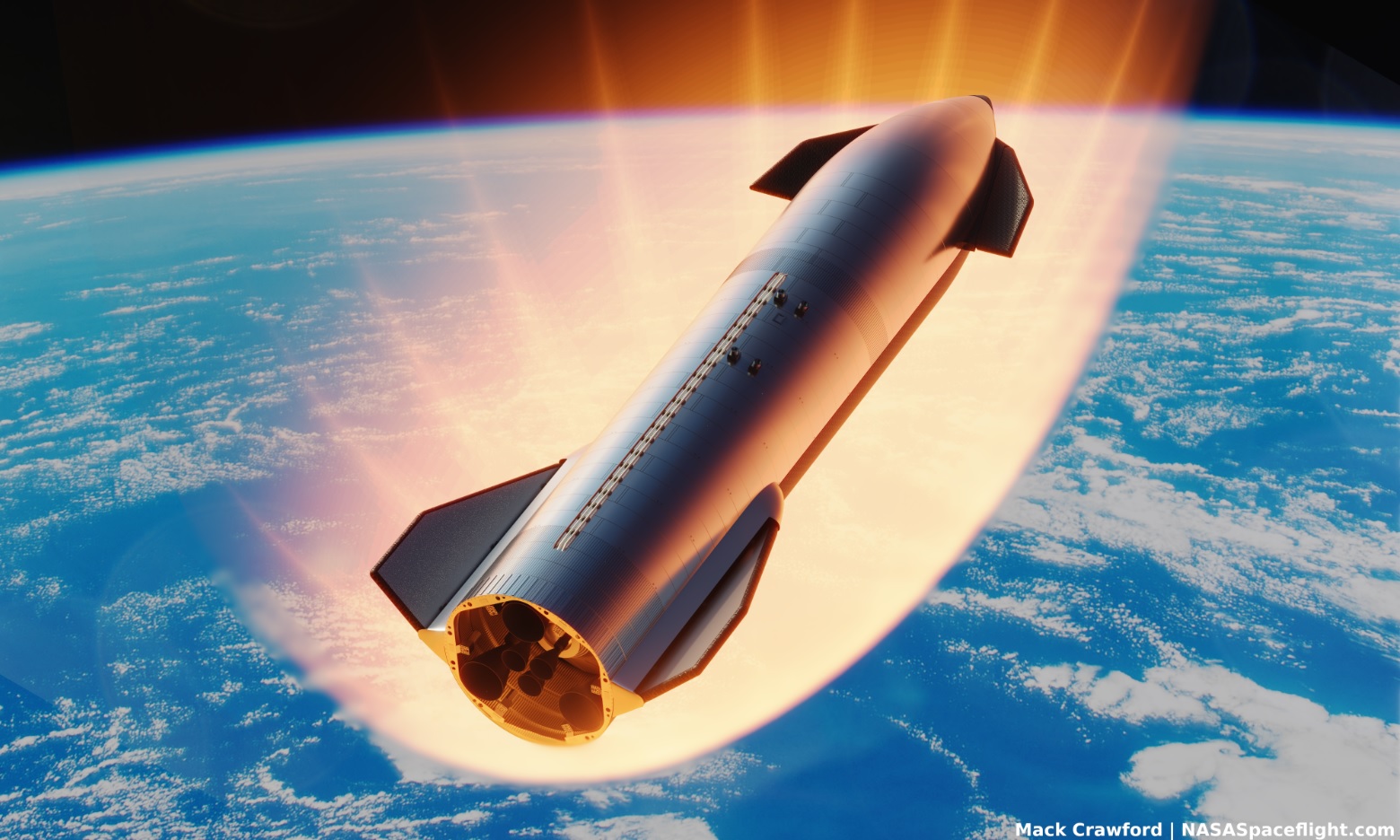 Commercial spaceflight companies are preparing to enter a new market: suborbital flights from one place to another on Earth. Aiming for fast transportation for passengers and cargo, these systems are being developed by a combination of established companies, such as SpaceX and Virgin Galactic, and new ones like Astra.

Technical and business challenges lie ahead for this new frontier, and an important piece is the coming wave of supersonic aircraft which could offer safer but slower alternatives to spaceflight. These two different approaches could face off in the 2020s to be the future of transportation on Earth.

The most prevalent concept for suborbital Earth to Earth transportation comes from none other than Elon Musk and SpaceX. Primarily designed for transporting large payloads to Mars for the purpose of colonization, the next generation Starship launch system offers a bonus capability for transporting large amounts of cargo around Earth.

Musk first presented this idea in 2017, envisioning suborbital spaceflights between spaceports offshore from major cities. These launch and landing facilities would be far enough to reduce the disruption of rocket launch noise levels and sonic booms produced by landing vehicles, connected to land by a high speed form of transportation such as speedboats or a hyperloop.

Originally, these Earth to Earth flights were expected to use both stages of the Big Falcon Rocket (BFR) rocket, since evolved and renamed to the Starship spacecraft and Super Heavy booster. In 2019, Musk revealed that these suborbital flights could instead utilize only the Starship vehicle with no booster, achievable for distances of approximately 10,000 kilometers or less. In order to meet thrust requirements, a single stage suborbital Starship would include an additional two to four Raptor engines.

Given the inherent danger of rocket powered space travel, the Starship system will complete many, possibly hundreds of flights before flying passengers, with the first Earth to Earth test flights beginning as early as 2022.

Another side effect of the Starship Mars architecture, which requires that methane be captured from Martian resources to refuel spacecraft and return to Earth, is that the same propellant production processes can be used on Earth to make Starship operations carbon neutral.

The idea of carbon neutrality, removing as much carbon from the atmosphere as is emitted by the system, is a crucial part of ensuring that future transportation systems do not contribute to the harmful effects of climate change. Musk has confirmed that carbon neutrality is an important goal of the Starship program.

SpaceX is not the only major commercial spaceflight company with a suborbital transportation concept. Richard Branson’s Virgin Galactic also has a vision of space travel around Earth. SpaceX’s Crew Dragon flying astronauts to Low Earth Orbit, and Virgin Galactic’s SpaceShipTwo flying crew on suborbital trajectories above the official American boundary of space at 80 kilometers altitude, are the only two commercial companies actively flying humans to space today. A successor to SpaceShipTwo is planned that could provide trans-continental spaceflights for passengers.

A bit of an Easter Egg from Richard Branson. Talking about a global network of spaceports, trans-continental supersonic space flights, delivering passengers anywhere on the world within a couple of hours. pic.twitter.com/WBZ6xvsfPO

While the name SpaceShipThree has not been mentioned recently, plans for a suborbital point-to-point transportation system are still planned by Virgin Galactic. Branson has mentioned a successor to SpaceShipTwo that can provide trans-continental spaceflights as recently as 2019. No timeline for test flights or commercial operations with this system have been announced yet. 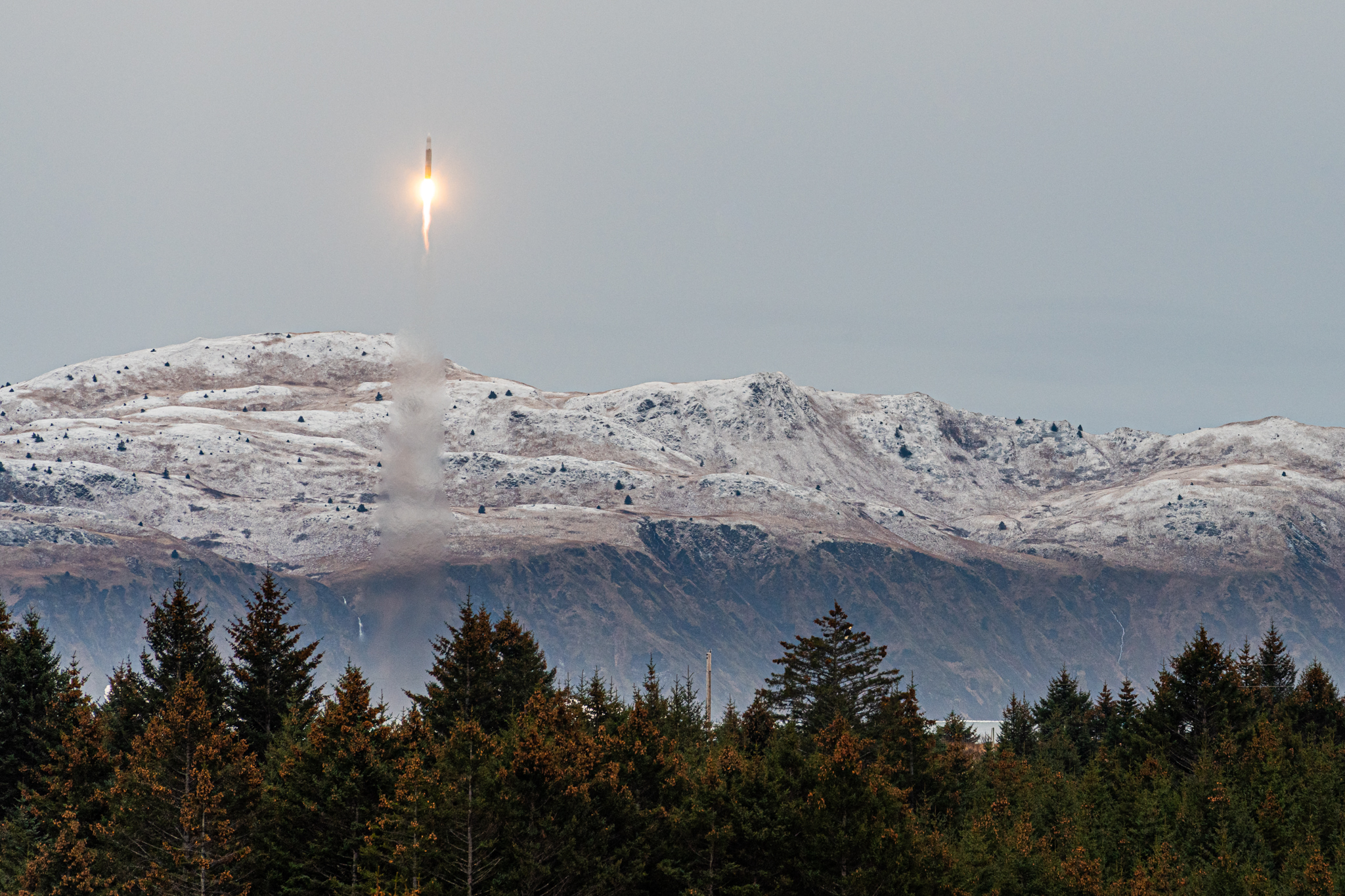 Astra recently launched their second orbital launch attempt, Rocket 3.2, which came up just short of achieving orbit for the first time in Astra’s history. The company is expected to achieve orbit with a paying customer payload on board Rocket 3.3 in 2021.

For suborbital transportation, Astra has proposed an upgrade to the Rocket 3 family, named Rocket 5. The first stage of Rocket 5 would be identical to that on Rocket 3. The second stage would be similar to the first stage, except with a single engine instead of five. The final stage of Rocket 5 would be the same as Rocket 3’s upper stage. This vehicle could be available for suborbital cargo deliveries no earlier than 2022.

While multiple suborbital transportation concepts proceed through development, several supersonic aircraft designs are also expected to debut, creating competition for the market of high speed transportation around the planet.

One such entrant is Boom Supersonic, which rolled out the XB-1 prototype aircraft in November 2020. The XB-1 will reach supersonic speeds during test flights which will inform the design of a supersonic airliner named Overture. Flight tests are expected to begin in 2021 in Mojave, California. The XB-1 has three General Electric J85-15 engines, from the same family of engines which power NASA’s T-38 Talon training aircraft and powered the WhiteKnightOne carrier aircraft which air-launched SpaceShipOne. 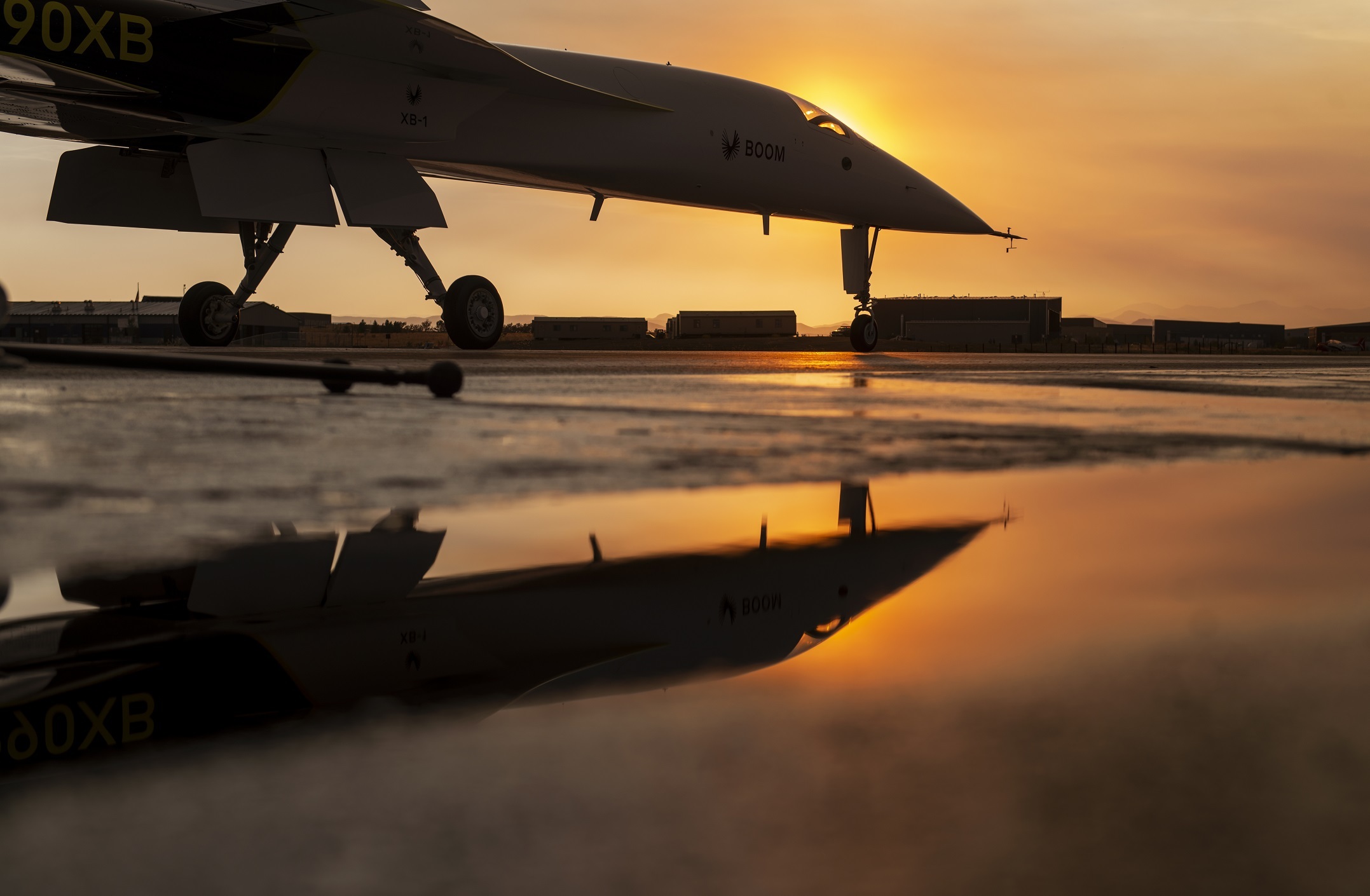 The Overture airliner is planned to roll out by 2025, and be operational by 2029, carrying up to 88 passengers at ranges up to approximately 7,870 kilometers. The aircraft will be powered by a to-be-determined engine provided by Rolls-Royce. Both the XB-1 test program and the Overture airliner are planned to be carbon neutral.

Orders for the Overture from both Japan Airlines and the Virgin Group have been announced. It is unclear whether the Virgin Group orders are from Virgin Galactic, who did enter a partnership with Boom on Overture in 2016, or possibly the Virgin Atlantic airline. 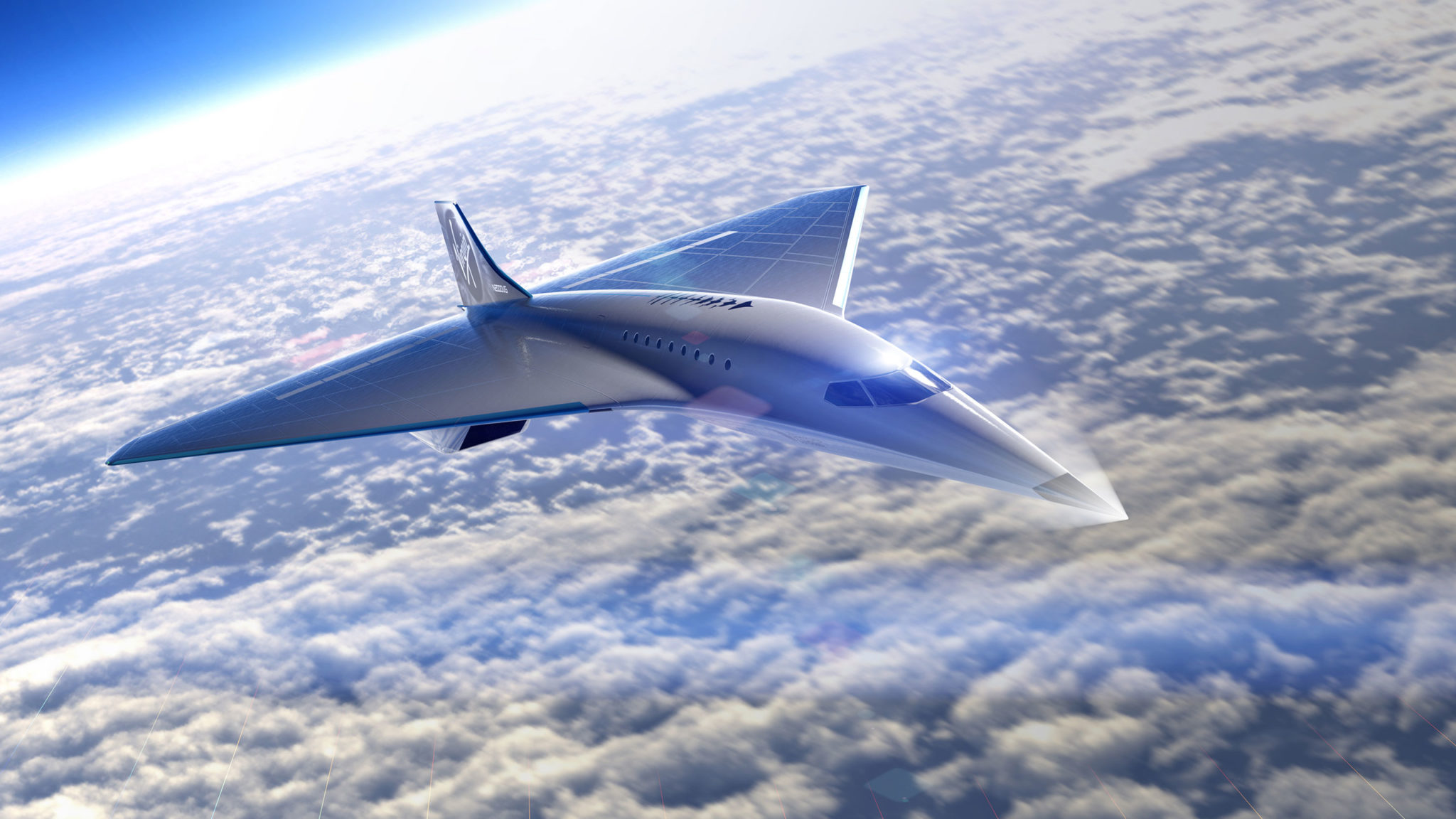 Another offeror in the market is Aerion Supersonic, developing their AS2 Supersonic Business Jet. Aerion recently broke ground on a new headquarters at Melbourne International Airport, just south of the Cape Canaveral Space Force Station and Patrick Space Force Base on Florida’s space coast.

The AS2 jet is a partnership with Boeing and General Electric, and is designed to carry up to 10 passengers at speeds up to Mach 1.4 over open water. The AS2 would be flown closer to Mach 1.2 near land to mitigate the intensity of sonic booms, or subsonic if required. Historically, disturbances on the ground from sonic booms have contributed to the retirement of Aérospatiale and British Aircraft Corporation’s Concorde and the hesitation from other companies to pursue supersonic air travel.

The ideas of hypersonic suborbital space travel and subsonic atmospheric flight vary in their approaches to a similar problem, but also face some common challenges. Both methods do produce sonic booms, which can disrupt people living on the ground and, in extreme cases, cause damage or injuries. Supersonic aircraft produce sonic booms along the entire flight path, with varying intensities depending on speed, altitude, and the geometry of the aircraft. Rockets, on the other hand, only cause sonic booms to be heard during landing, as the shockwaves created during launch move upwards, away from any observers that could hear them.

In order to better understand the effects of sonic booms from aircraft, Lockheed Martin’s Skunk Works division is developing the X-59 QueSST (Quiet Supersonic Technology) for NASA’s Low-Boom Flight Demonstration Program. The X-59 is uniquely shaped to decrease the intensity of the supersonic shockwave so as not to disturb populated areas while flying overhead. 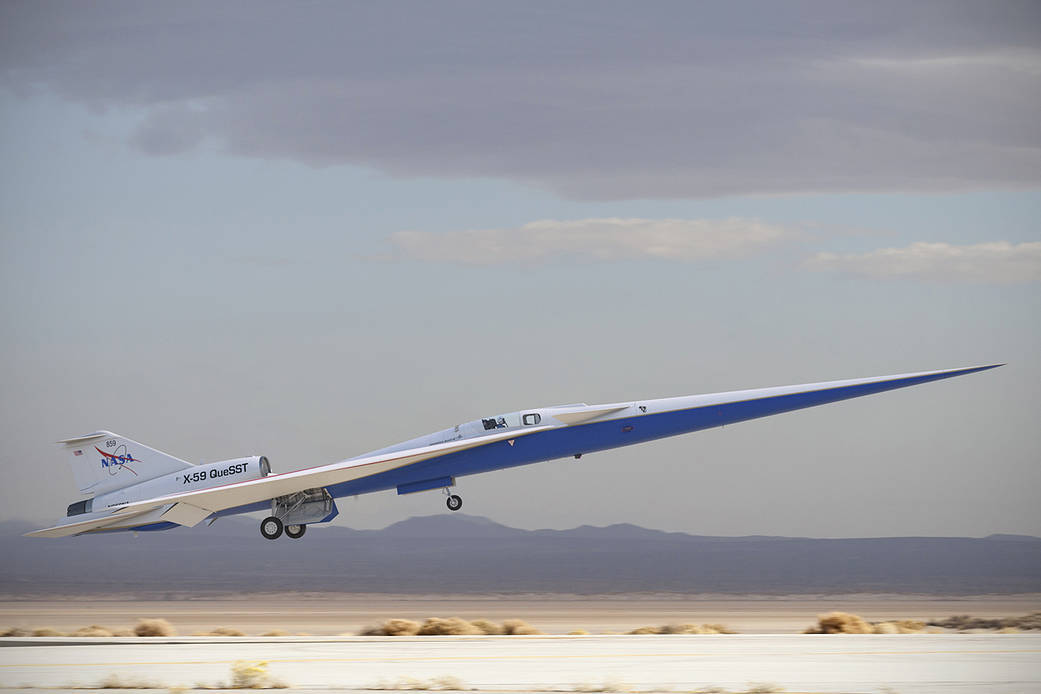 Render of the X-59 QueSST aircraft – via NASA

Powered by a General Electric F414 engine, the same as is used in the Boeing F/A-18 Super Hornet fighter jet, Lockheed Martin test flights are scheduled to begin in 2021, followed by delivery to NASA in 2022. The goal of the Low-Boom program is to collect data on the volume of sonic booms in order to inform legislation on approving supersonic air travel over populated areas. X-59 flights to contribute towards this mission begin in 2023, in addition to flights already underway using NASA’s F/A-18 fleet.

Sonic booms are not the only noise concern with these new methods of travel. Rockets produce potentially dangerous noise levels during launch, especially those on the scale of Starship. SpaceX plans to solve this by launching and landing far offshore from population centers, which means using a slower form of transportation to travel between the spaceport and the destination city.

Large rockets like Starship, especially if the Super Heavy booster is used, also have large blast danger areas in the event of a catastrophic anomaly while fully fueled. However, before flying commercial passengers, the Starship system will need to prove reliability comparable to that of present day airliners. This will surely include demonstrating a negligible risk of such an anomaly occurring. The Starship launch system also has no in-flight abort capability in the event that the Super Heavy booster or Starship’s Raptor propulsion system fails during flight, a risk that will need to be retired by flying many missions with only cargo on board, including both space missions and Earth to Earth test flights.

Another safety advantage winged aircraft have over propulsively landed rockets is the ability to glide in the event of an engine failure. Both these new supersonic airliners and spaceplane concepts like SpaceShipThree would be able to glide towards a controlled emergency landing during an emergency. This was recently demonstrated during Virgin Galactic’s most recent SpaceShipTwo flights, when VSS Unity glided back to the runway at Spaceport America after aborting during engine ignition. Vehicles which rely on their engines to land safely, such as Starship, do not have this contingency.

Looking past the important but solvable technical issues, the business case for faster Earth travel also remains to be proven. The costs of space launches and the limited capacity on upcoming supersonic airliners will likely mean higher ticket prices than today’s subsonic aircraft. The appeal of shorter travel times will need to outweigh the increased price.

An aspect of tourism may also come into play, as some travelers book travel not as commuters, but just to experience high speed air travel or suborbital spaceflight. However, this brings in even more competition from systems designed for suborbital space tourism, such as Blue Origin‘s New Shepard rocket or Virgin Galactic’s own SpaceShipTwo. Orbital space tourism on board SpaceX’s Crew Dragon and Starship vehicles may also draw customers away from the suborbital options.

Suborbital spaceflight offers faster travel times than supersonic airliners, arriving anywhere on Earth in under an hour versus a couple hours on an aircraft. But space travel also offers additional challenges for safety and for noise levels on the ground. The key to systems like Starship being successful for Earth to Earth transportation will be proving the same level of safety as an airliner. If this can be done, than a combination of spaceflight and high speed airliners may be the future of travel around humanity’s home planet.

The post Preparing for “Earth to Earth” space travel and a competition with supersonic airliners appeared first on NASASpaceFlight.com.