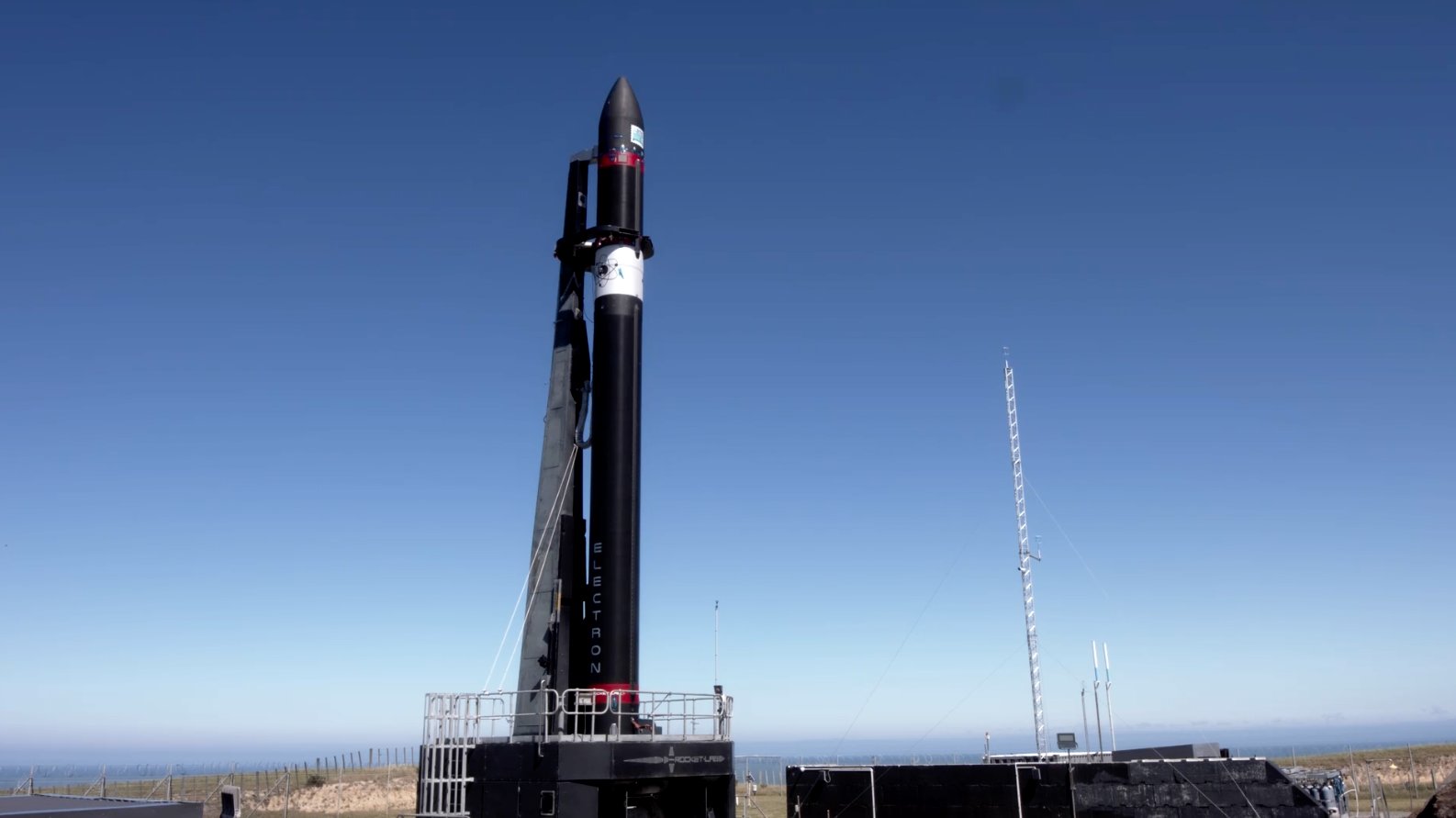 Rocket Lab is preparing to launch its sixth mission of 2020 — a launch which the company calls its “most diverse mission yet,” with 30 satellites onboard and a launch broadcast that will raise money for the Paediatric Intensive Care Unit at Starship children’s hospital.

The company will attempt a water landing of Electron’s first stage for the first time, with the mission named “Return to Sender” — a nod to this first milestone on the road to successfully recovering and reusing Electron.

Return to Sender will set a record for the amount of satellites launched on a single Electron mission.  Thirty payloads will be launched into a sun-synchronous orbit approximately 500 kilometers above Earth.

TriSept will debut their DRAGRACER mission, which is designed to eliminate space debris by speeding up the reentry process for spacecraft.  Two 6U cubesats (a 1U cubesat being 10 by 10 by 10 centimeters) designed by Millenium Space Systems will be deployed during the mission: a reference satellite and a satellite with a 70 meter long tether designed to increase drag.

It is expected that the spacecraft equipped with the tether will deorbit after approximately 45 days instead of the usual 7 to 9 years it would take a satellite to passively deorbit from an approximately 500 km orbit. 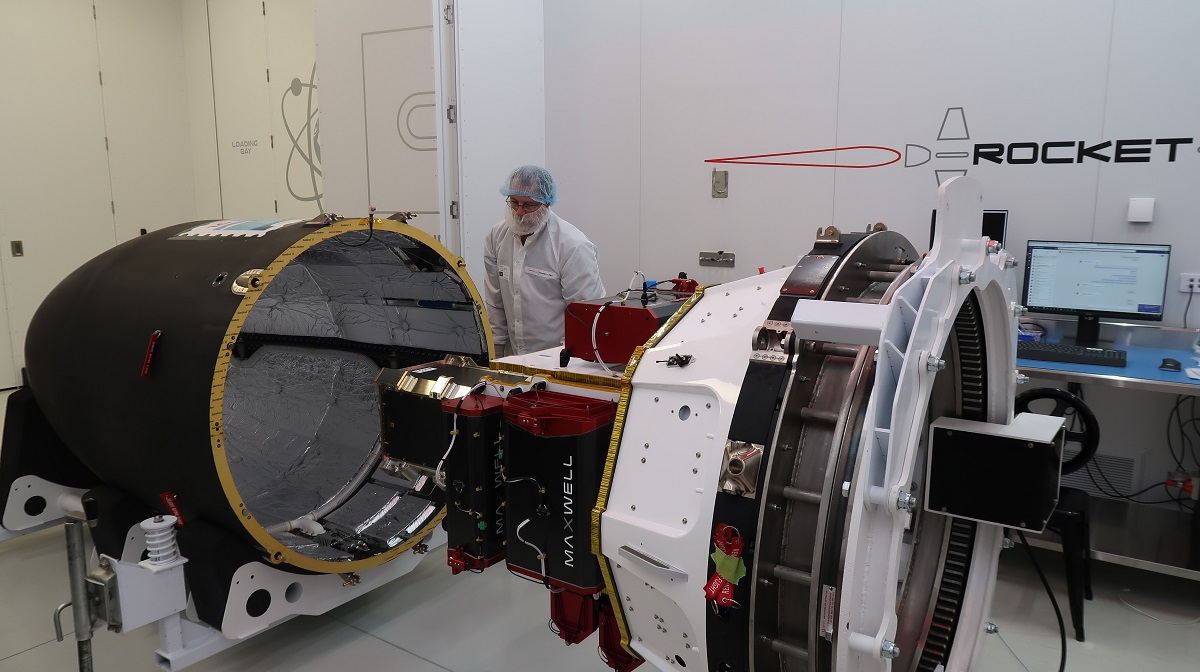 Unseenlabs will launch their next two BRO satellites, BRO-2 and 3.  These 6U cubesats specialize in maritime surveillance: monitoring illegal activities at sea and locating Radio Frequency (RF) emitters anywhere on Earth.  The French company previously launched their first BRO satellite with Rocket Lab in August 2019 and anticipate launching about 17 more satellites to complete their planned constellation.

Swam Technologies will launch 24 more of their SpaceBEE data relay satellites.  These extremely small 1/4U cubesats are designed to provide satellite communications to remote areas on Earth.

New Zealand’s first student-built spacecraft, called APSS-1, will also be hitching a ride on Electron.  According to Rocket Lab, the University of Auckland’s satellite “is designed to monitor electrical activity in Earth’s upper atmosphere to test whether ionospheric disturbances can predict earthquakes.”

Of the 30 objects launched into space, all but one will remain in orbit.  The exception is a mass simulator named Gnome Chompski, a 3D printed gnome.  The character is an homage to software company Valve’s “Half-Life” series and will eventually burn up in Earth’s atmosphere when Electron’s kick stage ends its mission.

In addition to validating 3D printing technology, the payload serves another important mission: Valve’s president Gabe Newell will donate $1 (US) to the Pediatric Intensive Care Unit at Starship children’s hospital for every person who watches the launch online at  www.rocketlabusa.com/live-stream (linked in article below) and www.twitch.tv/RocketLabUSA.

Rocket Lab’s Electron is a two or three stage liquid fueled rocket designed to launch small satellites into orbit.  It stands 17 meters tall and has a diameter of 1.2 meters.

Electron’s first stage is powered by nine Rutherford engines that are unique in that they are the first rocket engines to use electric-driven turbopumps and are almost entirely 3D printed. 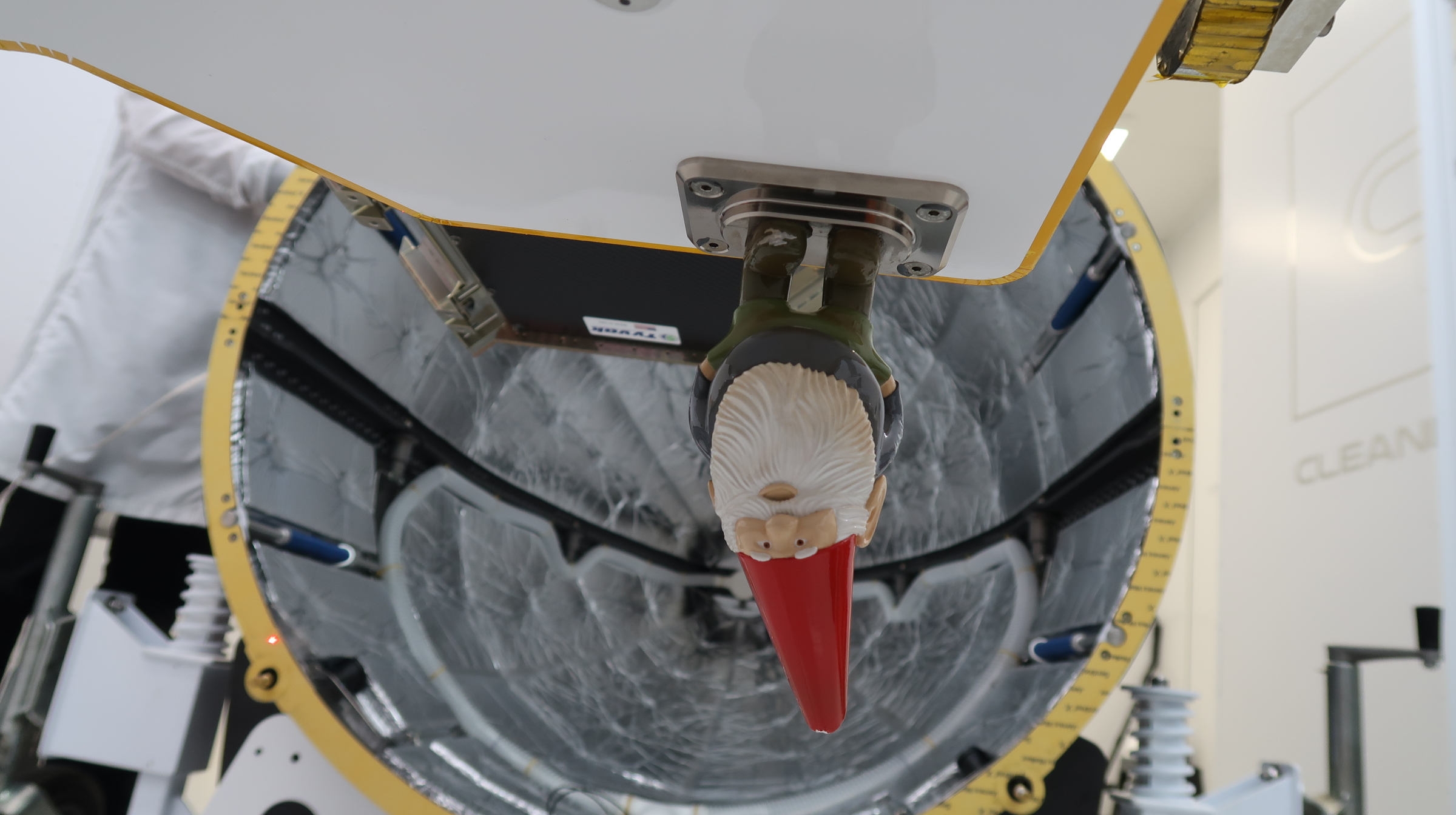 Electron can be flown with a third stage, also called the kick stage.  Although Rocket Lab advertises this stage as “optional,” almost all missions, including Return to Sender, have utilized the kick stage as it is very useful for deploying multiple satellites into different orbits.

This precision is a big selling point of Rocket Lab’s, as rideshare payloads on larger rockets often have to settle for whatever orbit the primary payload is deployed into.

For the first time, Rocket Lab will attempt a controlled landing of Electron’s first stage.  After stage separation, thrusters mounted on Electron’s interstage will orient the stage to reenter engines first.  The company calls this reentry process “the wall,” due to the “incredible heat and pressure” the rocket will face during its descent.

Once the stage decelerates below Mach 2, or twice the speed of sound, a drogue parachute will help slow the stage further.  Once Electron’s first stage has reached a safe speed, a larger main parachute will take over, enabling a “soft” water landing at around 10 meters per second, or 22 miles per hour.

A Rocket Lab ship will retrieve the stage from the water and transport it back to land.  The company does not plan to re-fly this stage if it is successfully recovered; instead, it will be taken apart and inspected by a team of engineers. 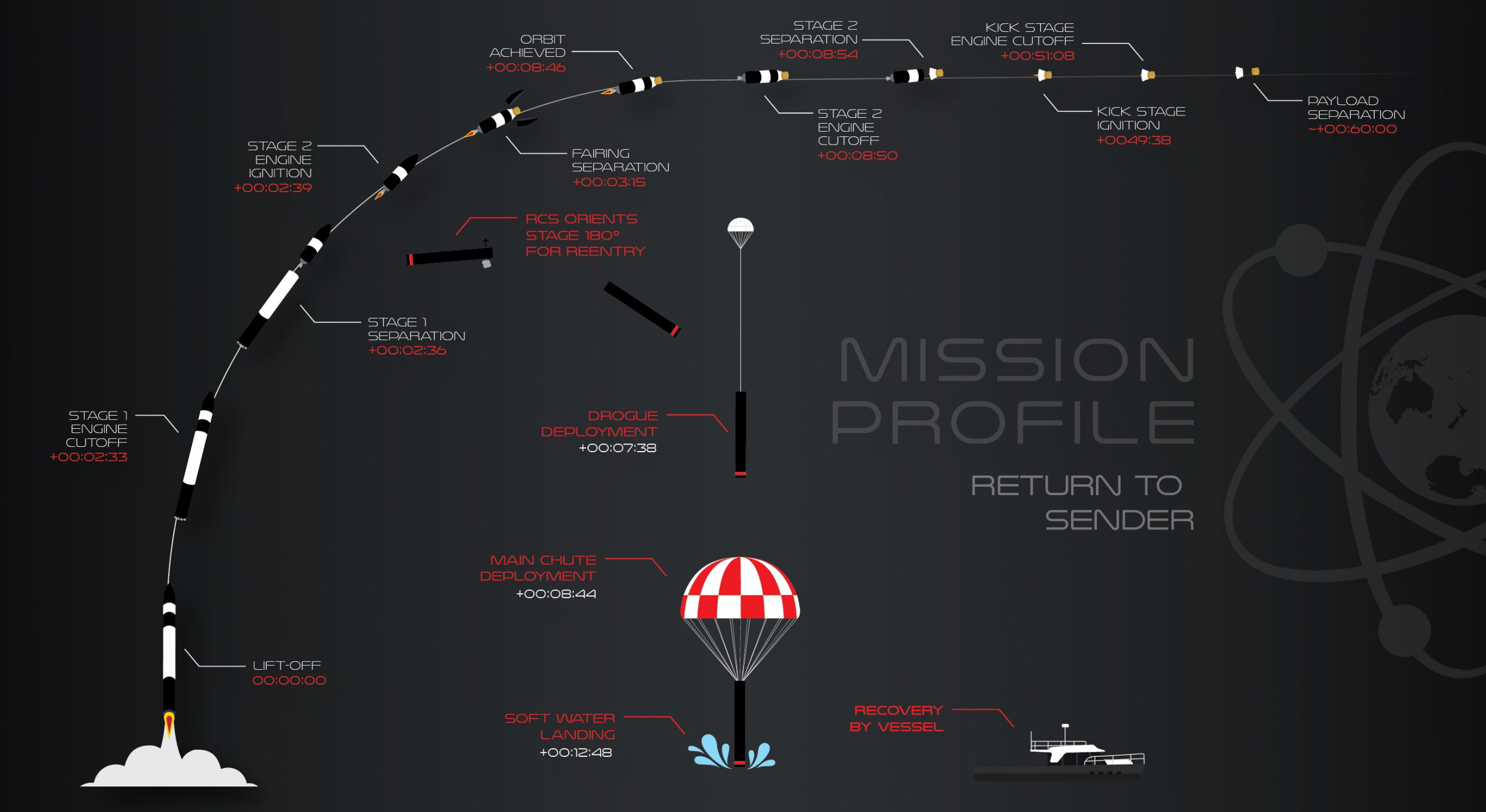 Although the company plans to broadcast views from the first stage during the mission, they expect to lose live coverage once the stage goes over the horizon from their launch site and the job of telemetry collection is handed off to recovery teams.

In the future, Rocket Lab plans to pluck falling stages out of the air using a helicopter. This process has been successfully tested several times and will be attempted on a later launch — not necessarily the next one.

In addition to helicopter tests, Rocket Lab has successfully conducted a controlled reentry of Electron’s first stage on two previous missions in December 2019 and January 2020.

Rocket Lab sees reusability not just as a cost-saving measure, but also as an important step to increasing their launch cadence.  The company could be the first small satellite launch provider to have a reusable launch system.

As per usual, Rocket Lab conducted a successful wet dress rehearsal (WDR) of the Electron rocket designated for this mission.  During this process, the rocket was filled with fuel, simulating a normal countdown right up until engine ignition.

The countdown to launch began at T-6 hours when Rocket Lab’s recovery vessel arrived on station off the Māhia coast and conducted a check to determine if weather conditions were acceptable for recovery.

At T-4 hours, the road to the launch complex will close, and Electron will be raised vertical on Launch Complex-1.

During the next few hours, Electron will be loaded with rocket-grade kerosene (RP-1) and liquid oxygen.  At T-2 hours, marine zones around the launch complex will close, and the airspace surrounding the area will also be restricted at T-30 minutes.

At T-18 minutes, the launch director will conduct a go/no go poll of all launch operators in order to continue the countdown.  Passing T-2 minutes before launch, the team will hand off control of the countdown to Electron’s onboard computers.

At T-2 seconds, the nine Rutherford engines on Electron’s first stage will ignite and reach full thrust, a process that occurs almost instantly due to their electric-driven turbopumps.

Electron will lift off and begin pitching downrange.  After 2 minutes and 33 seconds of powered flight, the Rutherford engines on the first stage will shutdown.  Shortly after, the first and second stages will separate with the help of pneumatic pushers, followed by ignition of the second stage Rutherford engine.  Electron’s composite fairing will separate 3 minutes and 15 seconds into flight.

At 6 minutes and 8 seconds after launch, Electron’s second stage will perform its unique “hot swap” staging, where spent batteries used for the vacuum-optimized Rutherford’s turbopump are jettisoned. 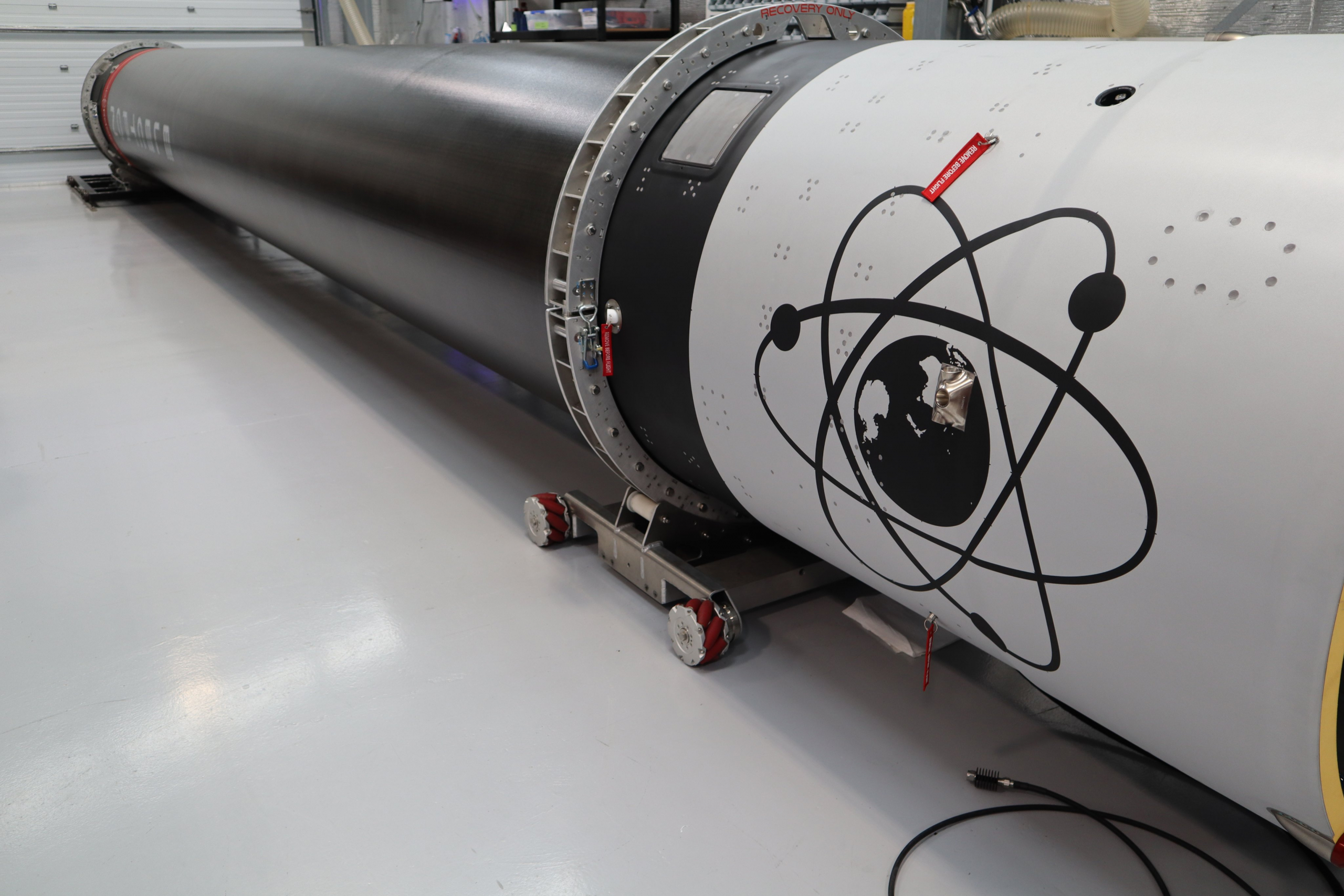 The first stage’s drogue chute will deploy at T+7:38, stabilizing and slowing the rocket.

Electron will reach its initial parking orbit at T+8:46 with second stage cutoff.  Around the same time, the first stage’s main parachute will deploy.

At T+8:54, Electron’s kick stage will separate from the second stage.

Electron’s first stage is expected to splash down at T+12:48.  Although this moment will not be shown live, it may be confirmed during the webcast, or later on the company’s Twitter account.

At T+49:38, the Curie engine on the kick stage will ignite, followed by shutdown about two minutes later.

Finally, around 1 hour after launch, all payloads will be deployed from Electron’s kick stage.