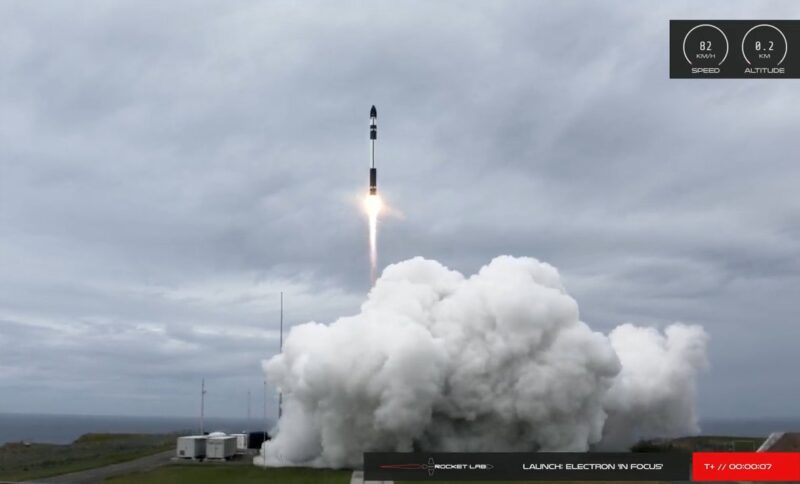 A Rocket Lab Electron vehicle lifted satellites for Planet and Canon Electronics on Wednesday. In the mission dubbed “In Focus,” Electron took off from Launch Complex 1 in Mahia, New Zealand at 5:21 p.m. ET. The Kick Stage successfully separated from Electron about nine minutes after liftoff. Payloads were set to deploy about an hour after liftoff. The launch was scrubbed on Oct. 21 to assess sensor data.

The mission carried a total of 10 satellites, nine Planet SuperDove satellites, and Canon’s CE-SAT-IIB satellite. These are the same type of satellites Rocket Lab lost during the July 4 mission “Pics Or It Didn’t Happen” failed when the Electron vehicle experienced an anomaly after stage separation. Five SuperDoves were lost, along with Canon’s CE-SAT-IB. That mission also lost the Faraday-1 satellite for U.K. space startup In-Space. CEO Doug Liddle recently told Via Satellite that In-Space is working to rebuild Faraday-1, which will be called Faraday-Phoenix. Liddle said it is set to launch on a SpaceX Falcon 9 next June.

Canon’s CE-SAT-IIB is a technical demonstration microsatellite. It has a middle-size telescope equipped with an ultra-high sensitivity camera to take night images of the Earth and small size telescopes which are suitable for CubeSat use. The Canon payload was a rideshare arranged by Spaceflight Inc.