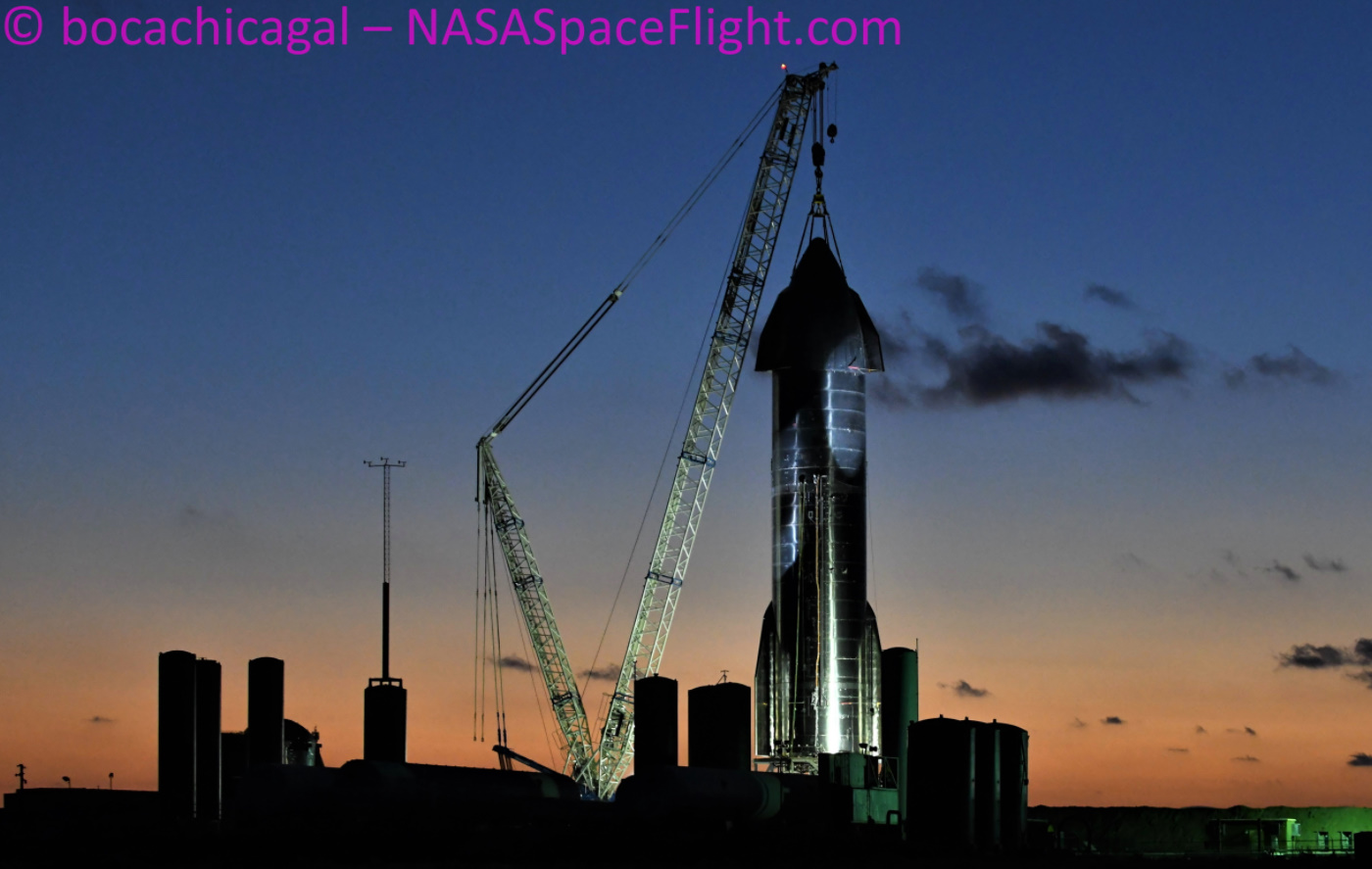 SN8 passed through the first major objective in impressive fashion, progressing in a staggered manner with a preburner attempt aborted, followed by a preburner test involving at least two of the Raptors.

The following night saw another preburner test, which clearly involved all three Raptors per the visuals, allowing SpaceX to push toward the Static Fire attempt.

A couple of seconds of fire and thunder immediately advanced Starship’s development with another first, later confirmed as a good test by Elon Musk, following what was likely an in-depth data review.

Clues towards that eventual confirmation could be seen at the Production Site, with the nosecone for SN8 being positioned for a rollout to the launch site to greet its Starship partner.

After it had been mated with its five-ring barrel section inside the Windbreak facility, nosecone installation was split into several parts – opening with the rollout of “Tankzilla” – the Liebherr LR1600/2 Crawler Crane.

Despite being a crawler crane, it required a lift atop of two Roll-Lift SPMT’s (Self Propelled Modular Transporter). After getting a little bogged down on the highway, the huge crane was placed near SN8, awaiting the nosecone that soon followed on its own SPMT.

Mate day involved several hours of waiting, as the wind strength was deemed too high to allow for the nosecone lift.

With the sun setting, the go was given for Tankzilla to take the strain and hoist the impressive-looking nosecone into the air for the mating operations to be completed. This procedure, only previously carried out with the MK1 Starship – which was effectively a non-flight vehicle – was completed without issue.

A beautiful sky behind a fully stacked Starship. SN8 you are beautiful.

Continued processing on the mated stack has progressed into the weekend, with the next major milestone expected to be a second Static Fire test this coming week. Per local road closure notices, the test is expected to take place during a daytime window.

Interestingly, ahead of the nosecone mate, two Raptor engines were temporarily removed from SN8. This in itself was not completely unexpected, albeit for assumed reasons such as for a closer inspection of the Raptors after their Static Fire test.

However, it is somewhat of a mystery why the first sign of work on the Raptors was the sight of another new engine, SN36 heading to the launch site.

With SN39 then removed, it was expected the processing flow had called for an engine swap before SN39 and SN36 both then returned the Production Facility on a truck. 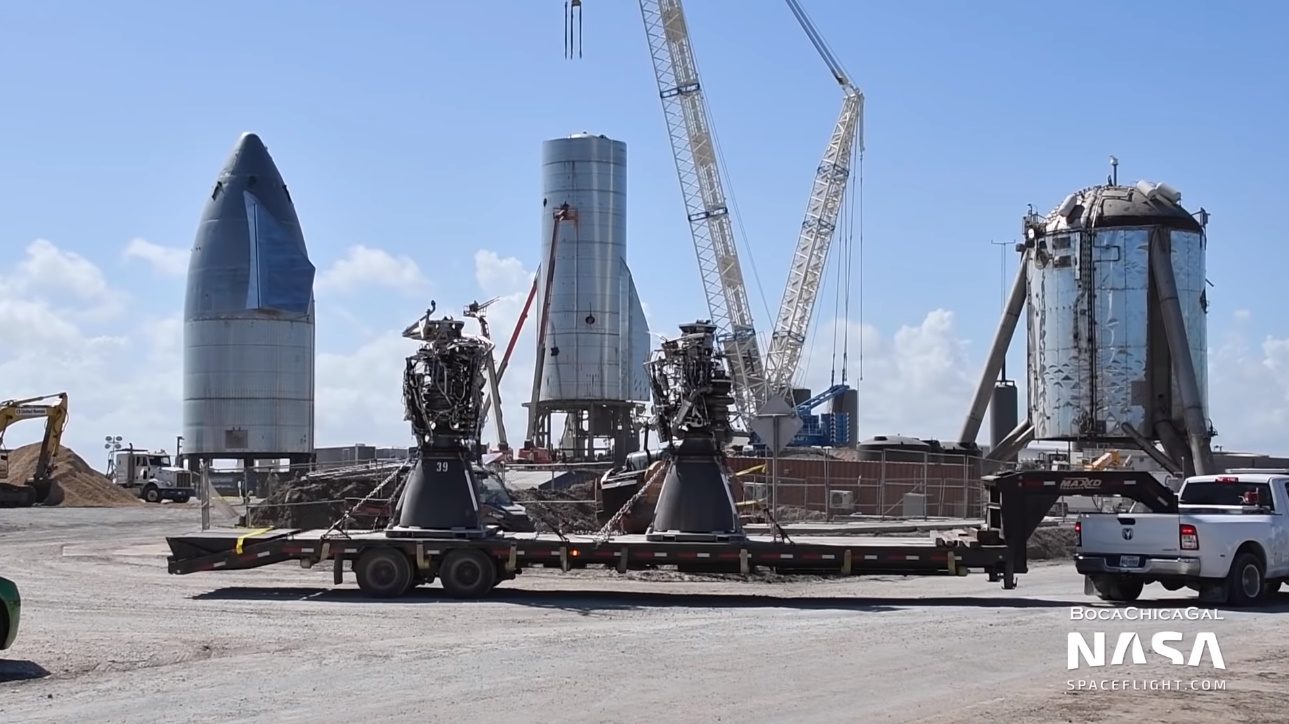 It is possible SN39 – one of the allocated Starship SN8 engines – received a swap out of some donated parts from SN36. It is understood a second SN8 engine was then removed before Starship was returned to her full three engine quota during the night.

Regardless, SN8 is now in a fully mated configuration, with a nosecone that has already undergone some RCS (Reaction Control System) and Header Tank testing – as such, laying the path for the upcoming second Static Fire test.

This test will utilize a different process of feeding the three Raptors, with the propellant coming from the Header Tanks, one of which – the LOX tank – is located at the tip of the nosecone. The Header Tanks are akin to fuel reserves that come into play during the landing burn.

Should the second Static Fire test result in a positive data review, SN8 will be fully on the road towards the historic test launch to 50,000 feet – and back.

As often mentioned with test programs, the potential for failure is high – albeit passing any one of several SN8 objectives will be a step forward and will provide priceless data for future Starships.

Those future Starships are literally waiting in the wings, with SN9 and SN10 both in the Mid Bay – with the former set to receive its fins.

With sections and parts for Starships up to at least SN14 spotted over recent weeks, one often-raised question is the Raptor engines’ supply line.

Clues are provided by the rotation of Raptors out of SpaceX’s McGregor test facility, with NSF member Gary Blair’s latest pass during his plane commutes showing SN41 on the horizontal test stand with another Raptor (ref: L2 McGregor Section). 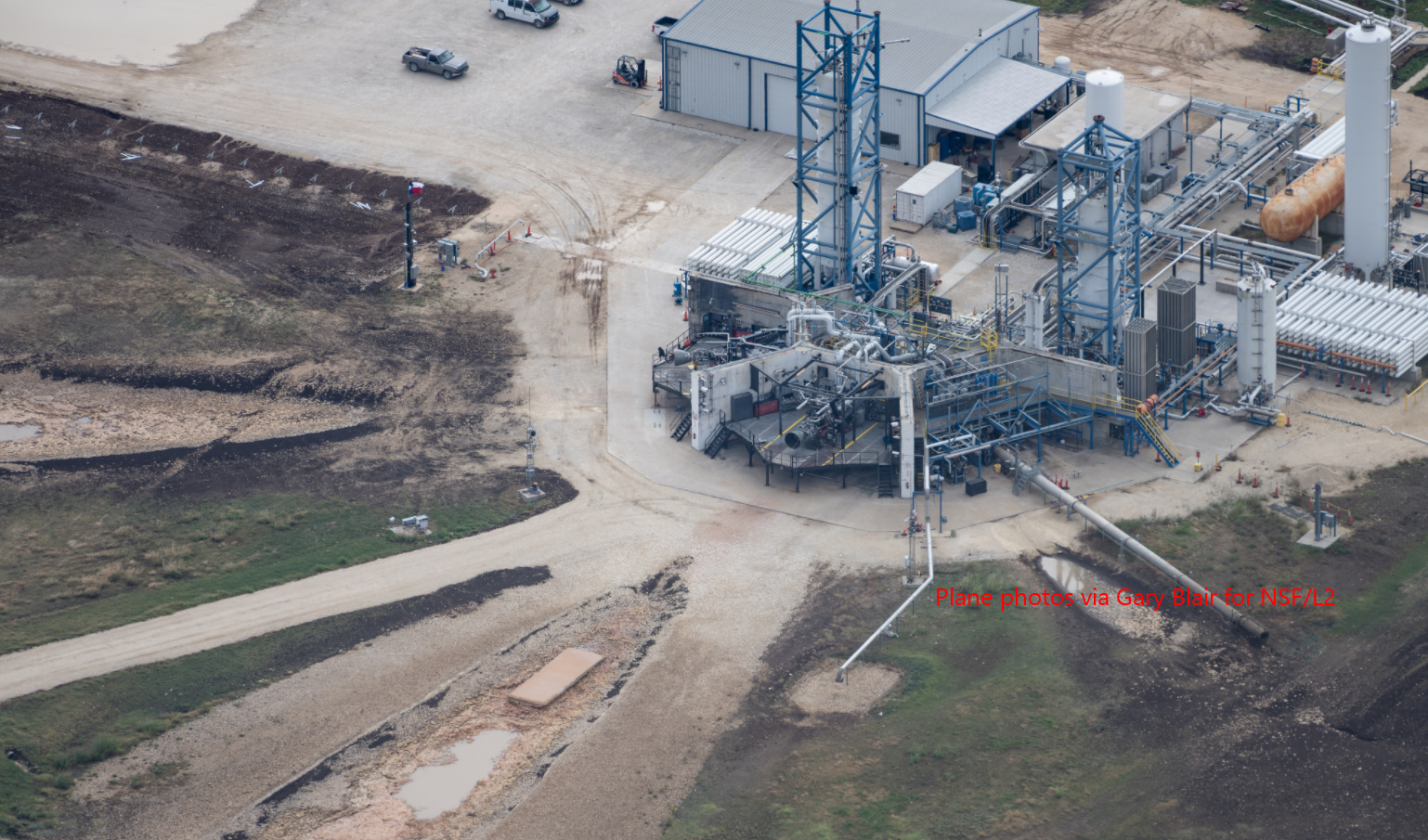 McGregor plane photo of the Raptor test stand via Gary Blair for NSF/L2.

Other photos show the Tripod Stand – also now used for Raptor testing – to be vacated with workers laying fresh concrete below the flame bucket.

It is unknown how many Raptors are currently produced or in a production state at their facility at SpaceX HQ in Hawthorne, California.

Of course, these Raptors are all designed to be reusable. As such, the ultimate goal will be to return them safely via test launch successes and prepare them in groups for future Starship tests.

Most photos via Mary (@bocachicagal)

Cool gear and the ability to support our content: https://www.nasaspaceflight.com/shop/