In a year that should see both SpaceX and Boeing conduct the uncrewed test flights of their respective crew launch vehicles, Space Exploration Technologies, SpaceX, is making good progress toward its commercial crew goals.  With specific launch target dates to be reevaluated next month at a standard quarterly review, SpaceX is currently aiming to conduct their uncrewed demo flight test of Crew Dragon followed by an in-flight abort test before the all-important crew flight test in the second half of this year.

While the specific target dates for SpaceX’s three main Commercial Crew events are still under review and will be reevaluated in May at a standard quarterly evaluation with NASA’s Commercial Crew Program, SpaceX is currently targeting August for their uncrewed flight test of the crew Dragon vehicle, a test flight known as Demo Mission 1 (DM-1).

DM-1 will be followed by an in-flight abort test, where a crew Dragon will be mounted atop a Falcon 9 rocket with an abort triggered by Dragon’s onboard computers at the moment the vehicle reaches MaxQ (moment of maximum stress on the vehicle) during ascent.

Once those two milestones are complete, SpaceX aims to conduct a crew test flight of Dragon, known as DM-2.  This mission is currently slated for December 2018 but is likely to slip into early 2019.

Together, the DM-1 and DM-2 flights for SpaceX serve as the company’s certification missions for the Commercial Crew Program, leading to the standard 6-month duration crew rotation flights to the International Space Station.  Those crew rotation flights are commonly known in the Commercial Crew Program as the Post Certification Missions, or PCMs.  Despite the fact that the Demo missions have not yet flown, NASA is already working with SpaceX on the planning for the first two PCM flights of the crew Dragon.

“A lot of work’s been done ensuring that the spacecraft is ready to be able to move toward progress toward the uncrewed and then the crewed mission,” noted Kathy Lueders, Program Manager NASA’s Commercial Crew Program, during a briefing to the most-recent NASA Advisory Council meeting at the end of March.

“We’ve been working through a major fire suppression campaign, making sure that [Dragon] and its systems are controlling that key hazard,” said Ms. Lueders while overviewing the recent progress SpaceX has made in the construction of the crew Dragon capsules for both the DM-1 and DM-2 missions.

Some of these activities have included installation of Dragon’s radiators and intermediate radiator build up, end-to-end comm suit system testing, and integrated suit testing inside the Dragon training module to make sure the integrated system is working.  Likewise, the critical C2V2 crypto-comm radio for vehicle communications is also undergoing testing in part to ensure that the effects of a water landing on the crypto-comm are understood – with the goal being that the water landing will not impact the comm system at all. 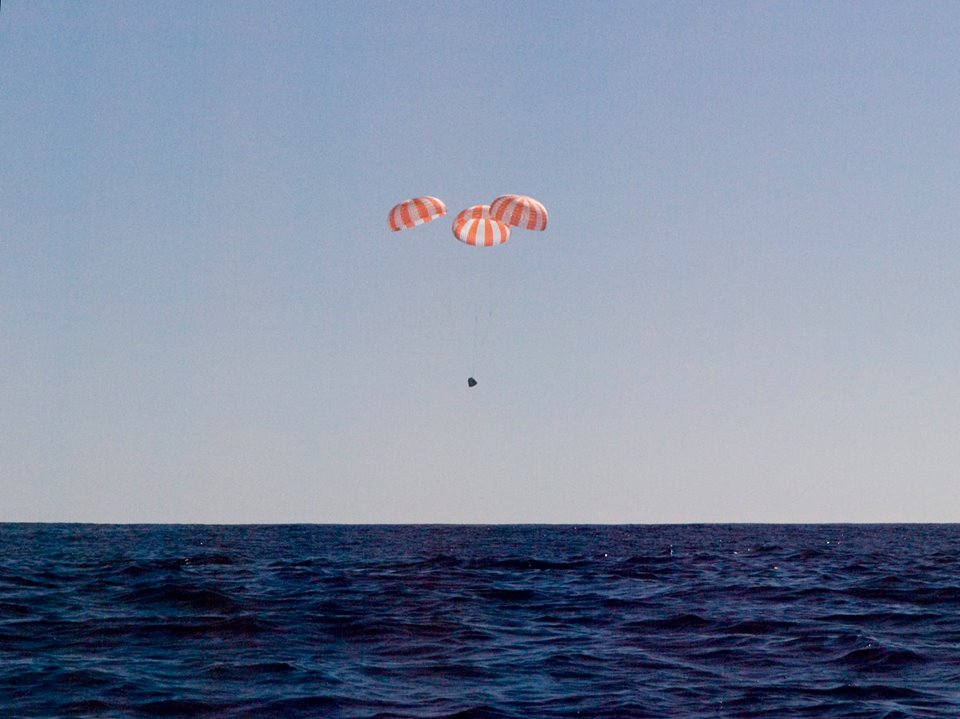 A cargo Dragon prepares for splashdown in the Pacific Ocean after a successful mission to the International Space Station. (Credit: SpaceX)

Intriguingly, given that NASA’s Mercury, Gemini, and Apollo programs all landed in water as will the Orion crew capsule, some discussion at the most recent NAC (NASA Advisory Council) update for commercial crew focused on SpaceX’s performance of water landings for crew Dragon and the agency’s lack of understanding of exactly how water landings will affect the crew.

When prompted by a NAC member on the surprising nature of this statement, Ms. Lueders said, “We’ve been working towards really understanding how the water landings are going to be affecting the [crew].  From an environmental perspective, one of the things people are worried about was the landing from a wave perspective. So we’ve been working through exactly how we model where and under which conditions we’d exceed those certified loads on the vehicle.”

The crux of the concern comes from understanding how the entire integrated system of the crew Dragon capsule performs under certain water landing conditions and making sure that the loads on the vehicle during various sea state conditions do not exceed the ability of the vehicle to protect the crew.

This led to a statement from Ms. Lueders that the Commercial Crew Program was working with SpaceX as well as Boeing to understand maximum sea state conditions for both Dragon and Starliner and the potential creation of Launch Commit Criteria for sea states in the down range abort zones underneath the flight track for both the Falcon 9 with Dragon and the Atlas V with Starliner.

When those Launch Commit Criteria for sea states come to fruition, it will be the first time since the 1970s that crew launches from the United States will hold the potential of being scrubbed due to high or rough seas hundreds of miles down-range from the launch site for sea states that could imperil crew rescue and crew safety in the event of a launch abort.

Something that will greatly help and further the understanding of sea state conditions and their impact on overall integrated vehicle performance and crew safety will come this fall when SpaceX conducts their water landing tests.

Moreover, crew interface displays are also progressing.  “Crew displays is obviously a new capability the SpaceX folks are working through.  Our crew members have been working hand in glove with SpaceX, giving them their lessons learned on how to build their displays and evaluating their new systems as they’re bringing them on,” said Ms. Lueders.  “So step by step, the SpaceX folks are maturing and adding capabilities so that we can start beginning integrated system level test by the end of the summer.”

That systems-level testing will include Dragon’s propulsion module system.  “They’re doing an integrated system test of one of their [thruster] quads to make sure they understand the propulsion system dynamics as they’re running through different abort sequences and other stressing cases on their propulsion system,” noted Ms. Lueders.

In 2018, @Boeing & @SpaceX are making progress toward sending our astronauts to & from @Space_Station. Both partners are continuing to manufacture spaceflight hardware, test & prove that their systems meet @Commercial_Crew mission & safety requirements: https://t.co/EmTre34iK9 pic.twitter.com/Dz7hFJyLqp

Moreover, the avionics bay for the DM-1 Dragon is fully populated and is going through checkouts.  All cabin support equipment and propulsion components are installed. Final installation is also underway on the ECLSS (Environmental Control and Life Support System) as well as the oxygen and nitrox delivery panels.

As far as the crew dragons ability to generate its own power, 120 of the 240 solar arrays have been completed and are in the process of being installed onto the DM-1 vehicle.  Overall, the docking system build for DM-1 is 90% complete and underwent testing at the Johnson Space Center prior to being installed on the vehicle for flight.

At this point, the crew Dragon for DM-1 will be shipped to Plum Brook Station for environmental testing at the end of May.

For SpaceX, the prime consideration for the DM-1 mission is not solely the crew Dragon capsule but also the Block 5 version of the Falcon 9 that incorporates all of NASA’s asked for upgrades, including new engine turbines and upgraded COPV (Composite Overwrap Pressure Vessel) designs. 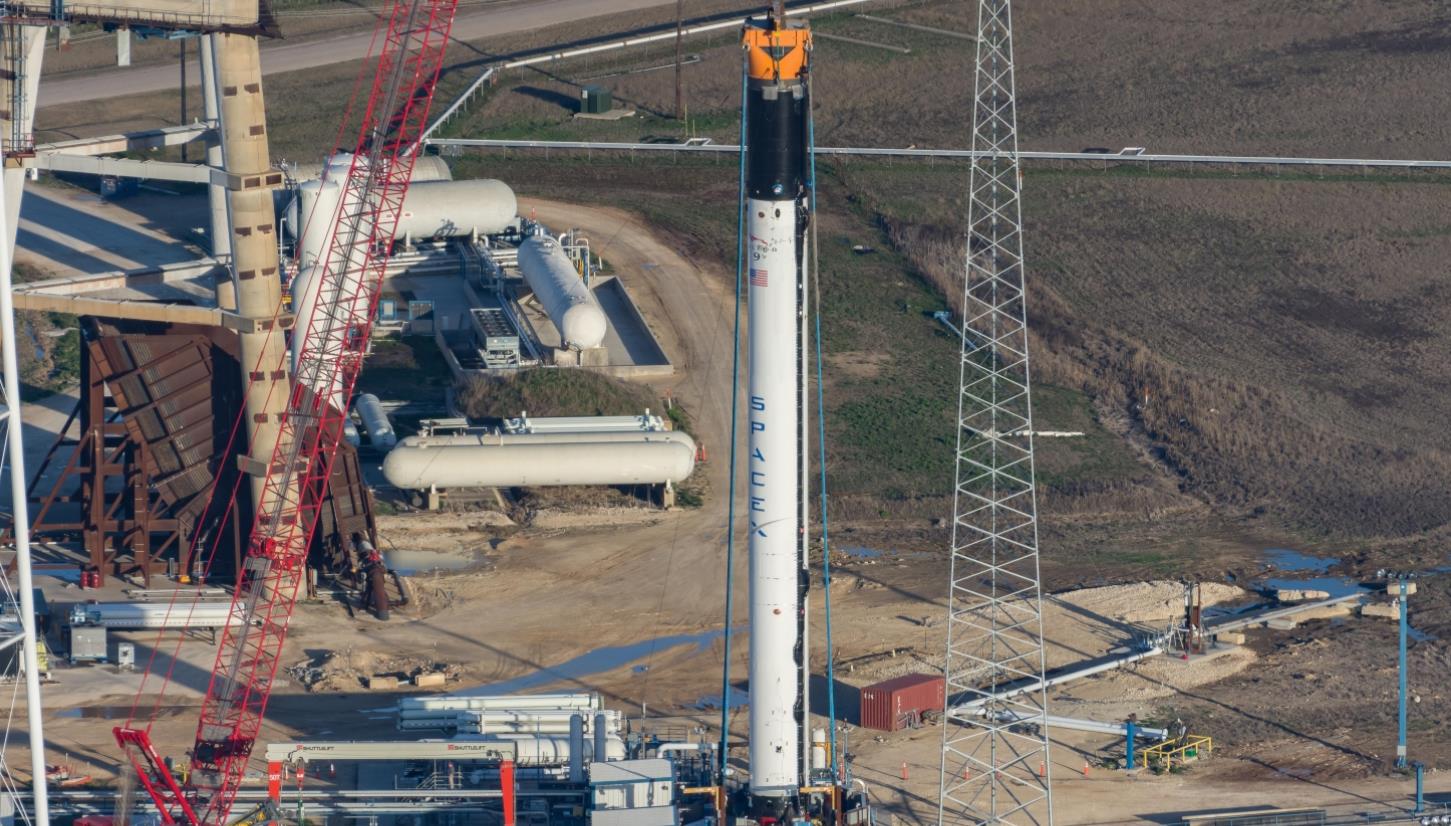 Ms. Lueders noted that the crew configuration qualification for the Merlin 1D engines are underway, and the new Octoweb 3.0 design that houses the 9 Merlin 1Ds at the base of the Falcon 9 first stage has successfully completed ground test requirements.

Moreover, the Block 5 will consist of the new COPV 2.0 design for the helium bottle pressurization system.  These systems will all fly on the first Block 5 mission next month that will loft the Bangabandhu-1 satellite for Bangladesh into orbit.  For the specific Falcon 9 vehicle that will launch the DM-1 flight, Ms. Lueders related that this vehicle is in flow at SpaceX’s production facility in Hawthorne, California, with both of Stage 1’s tanks in vertical integration and COPV installation.

Presently, the DM-1 vehicle is understood to be Falcon 9 first stage number B1051.  The Falcon 9 that will launch the DM-2 mission is also in manufacturing at this time, with the propellant tanks currently being welded.

As for the launch pad, most work to convert LC-39A for crew readiness was halted as SpaceX focused on its Falcon Heavy demo campaign.  Once that mission was away in early February, work resumed to finish converting Pad-A for commercial crew readiness.

Most notably, this has included completion of removal of the Rotating Service Structure (RSS) from the Space Shuttle era, with most recent photos showing less than 10 small structural supports remaining before the entire RSS removal process is complete. 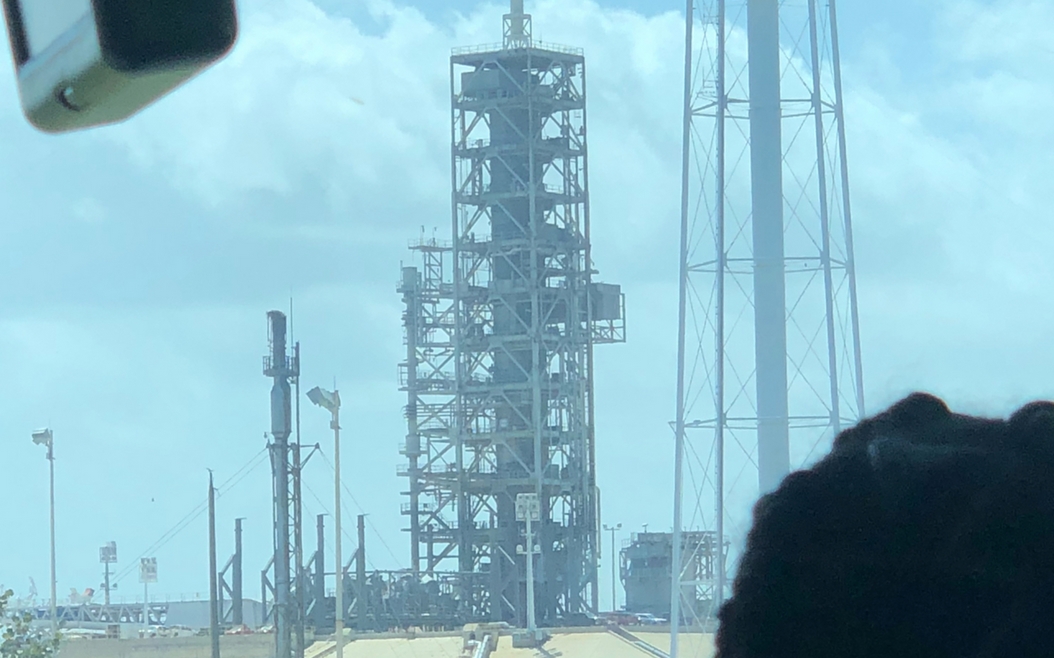 The removal of the RSS at 39A

While the RSS was vital for the Shuttle program, it is unnecessary for SpaceX’s use of the pad, and demolition of the structure was preferred over the cost of maintaining the massive hunk of steel in a salt air environment by the Atlantic Ocean.

Once the RSS is completely removed, pad teams will begin work to raise the slide wire basket escape system from the 195 ft level of the Fixed Service Structure (FSS) tower to the top of the FSS.  The slide wire basket system was installed at pad 39A at the beginning of the Space Shuttle program for emergency use by final launch preparation teams and/or flight crews in the event that the need to quickly evacuate pad arose.

The same system will be utilized on Pad-A for SpaceX’s crewed missions of the Falcon 9, but as the Falcon 9 places the Dragon capsule far higher than the Shuttle’s crew cabin in terms of location along the FSS, the baskets must now be moved to the top of the tower.  When asked by NASASpaceflight’s Chris Gebhardt when that operation would begin, NASA said they were uncertain but expected the process to commence within the next few months.

Moving the slide wire baskets is not the only addition to the FSS needed for SpaceX’s crewed missions.  Installation of the crew access arm must also take place before the crewed DM-2 flight later this year.  Current schedules presented to the NASA Advisory Council late last month show that installation of the crew access arm at LC-39A will occur in autumn of this year between the DM-1 and DM-2 flights.