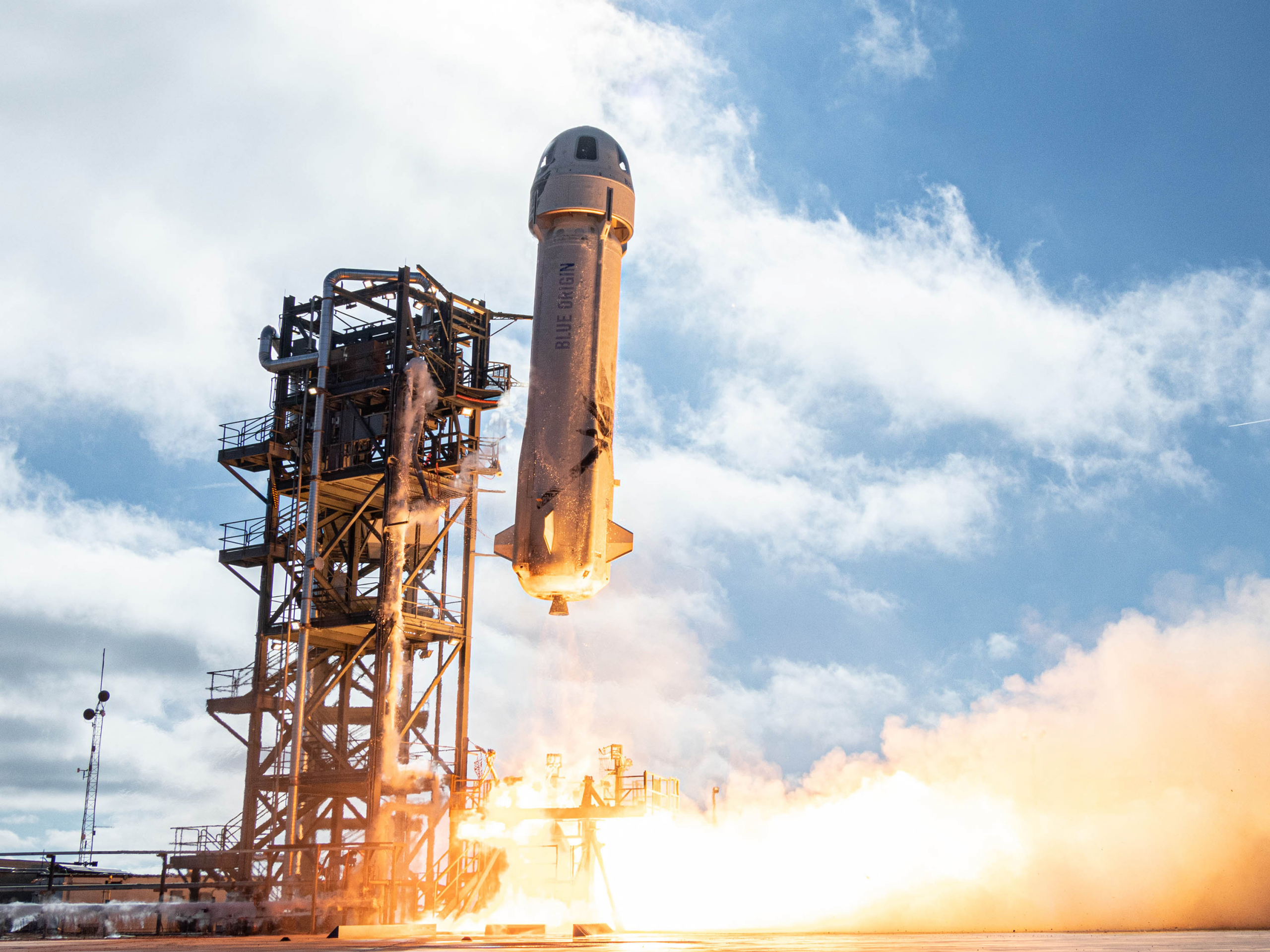 After a lengthy ten-month lull in flights following the previous test of Blue Origin’s suborbital New Shepard launch system, the company is ready to return to action with another test launch and landing of the fully reusable booster and capsule duo.

Following a weather-related and technical issue during a window late in September, the flight is scheduled to take place from the company’s West Texas facility — near Van Horn, Texas — on Tuesday morning at 8:35 AM CDT / 13:35 UTC.

This mission, also known as NS-13, will see 12 commercial payloads launched to the edge of space and back, including a NASA-developed sensor suite that could enable future lunar landing craft to perform safe and precise touchdowns on the surface of the Moon as part of NASA’s Artemis exploration program.

As in the name, the NS-13 mission will be the 13th test flight of the New Shepard launch system, and the first such flight of 2020.

New Shepard is the first in a line of vehicles that Blue Origin will potentially operate. The booster and capsule were built to serve the suborbital space tourism market, which will allow paying customers to experience a few minutes of flight time in microgravity before safely returning to the surface of Earth.

The New Shepard test program is meant to ensure the reliability and safety of the system, with multiple flights having been conducted on the three New Shepard vehicles that have flown thus far.

The first flight of New Shepard took place in April 2015, with a successful launch to an altitude of 307,000 feet (93.5 kilometers) — just below the Kármán line, the internationally-recognized boundary where space begins — and a safe return of the capsule, or Crew Module, to the surface.

However, the first New Shepard booster, which is powered by a Blue Origin-produced BE-3 engine and designed to be reusable, was not recovered after a loss of pressure occurred within the vehicle’s hydraulic system. 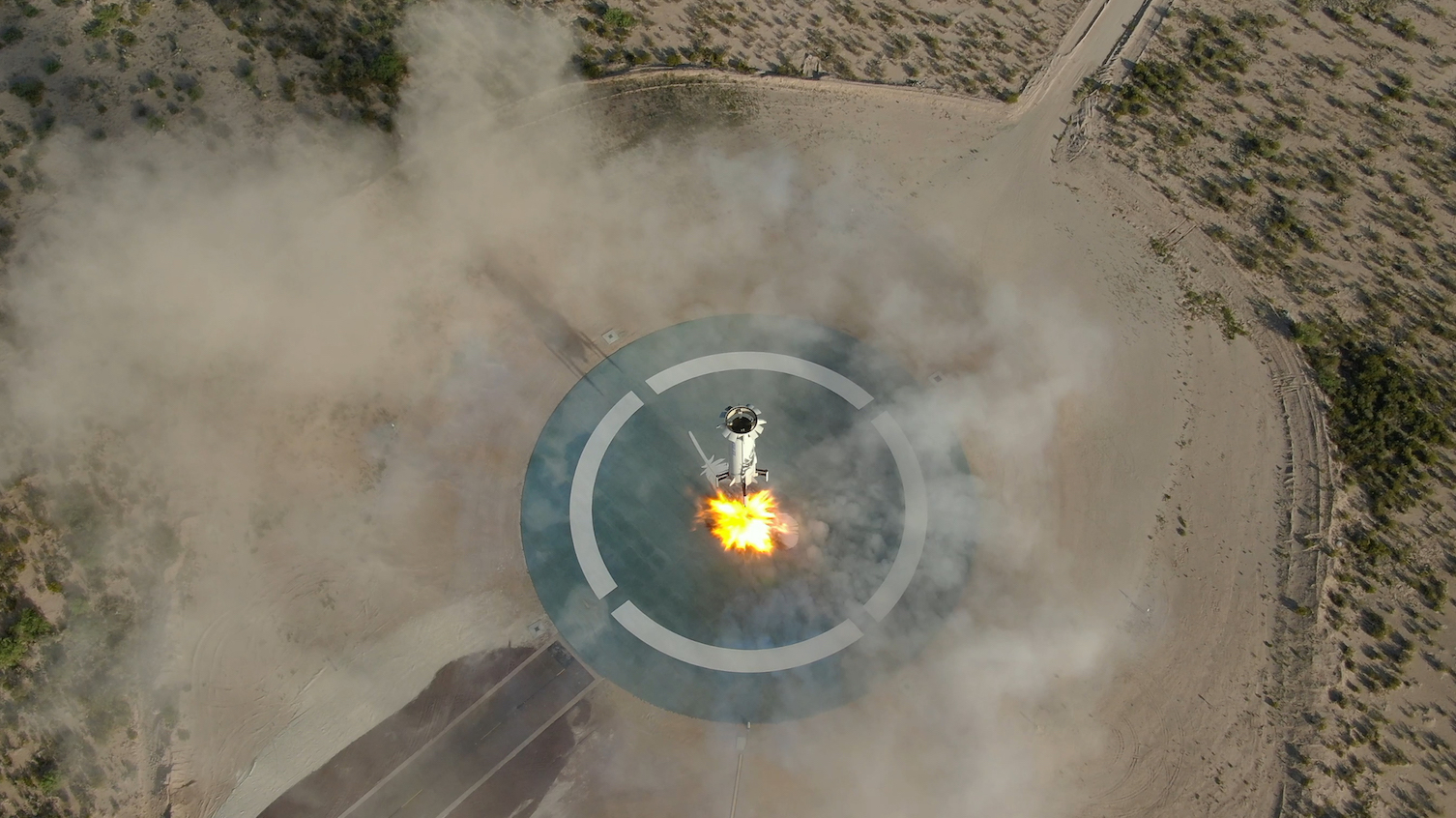 The New Shepard 3 booster performs a propulsive landing during the NS-11 mission in May 2019 – credit: Blue Origin

In November 2015, the second test flight took place seven months after the first, with the second New Shepard booster lofting its Crew Module to a height of 329,839 feet (100.5 kilometers) before touching down in the West Texas desert via a retropropulsive landing. This marked the first time that a rocket successfully landed itself under retropropulsion after launching something into space — suborbital or orbital — specifically for recovery and reuse.

That particular booster (New Shepard 2 or NS2) would be reused and reflown another four times, finally culminating in a successful demonstration of the Crew Module’s abort system and the unexpected survival and landing of the booster during an in-flight abort test in October 2016.

New Shepard 2 was then retired, and a new rocket and Crew Module (which has been christened Crew Module 2.0) were built in order to closely resemble the spacecraft that will launch human passengers. The booster and capsule have successfully flown six times since their first flight, NS-7, in December 2017, with numerous commercial and government payloads flying onboard each mission.

Thursday’s mission will go into the books as the 7th flight of the New Shepard 3 vehicle – a new reusability record for the Kent, Washington-based aerospace company.

New Shepard’s payloads are usually secured inside the Crew Module, where they are subjected to both the stresses of launch and approximately two minutes of microgravity before their return through the atmosphere and down to the surface of Earth.

This will be the case with most of the payloads flying on the NS-13 mission, with the exception of a few: a series of NASA-developed sensors and imagers that are mounted on the exterior of the New Shepard booster.

We've developed @NASA_Technology to help spacecraft make precise landings on the Moon, and on other worlds.

On Thurs., Sept. 24, we're testing this new sensor suite on a @BlueOrigin suborbital launch. Liftoff is targeted for 11am ET. How to watch: https://t.co/4PTuXKq2VF pic.twitter.com/LdU9M9ntts

This hardware is fundamental to the development of the agency’s Safe and Precise Landing – Integrated Capabilities Evolution (SPLICE) technology suite, which aims to allow robotic and crewed missions to land precisely on the surface of the Moon, as well as other worlds.

The components of SPLICE flying on NS-13 consist of a terrain relative navigation sensor subsystem, a navigation Doppler LIDAR, and a high-speed descent and landing computer. All three of these elements will control the New Shepard booster’s descent portion of flight on Thursday morning.

Another SPLICE sensor subsystem – a hazard detection LIDAR – will not fly on NS-13 but will instead see a trip to space and back during another suborbital mission.

NASA designed the elements of SPLICE to work together or independently, meaning one of all of these subsystems can be integrated into a spacecraft, depending on the destination and mission requirements.

The flight path of New Shepard, more specifically its booster, is relevant to/mimics certain aspects of a lunar landing, thereby providing a unique opportunity for NASA to adequately demonstrate the performance of the SPLICE suite during flight conditions. Sensors and algorithms can also be matured for potential use on Artemis Moon exploration missions, such as Artemis III – the mission that will feature the program’s first crewed landing on the lunar surface.

The NS-13 mission will be the first of two flights to test these lunar landing technologies to help increase confidence and reduce risk for future missions to the Moon, Mars, and other destinations.

Eight other NASA-procured payloads will fly on Thursday’s mission, as part of the agency’s Flight Opportunities program, and will be stowed inside the New Shepard Crew Module.

These include a hydroponic chamber that will enable the growth of edible aquatic plants in space (LilyPond by Space Lab Technologies), an environment monitoring suite (provided by the Johns Hopkins Applied Physics Laboratory), a biological imaging system (provided by the University of Florida), and many more.

Also onboard the New Shepard Crew Module will be tens of thousands of postcards from Club for the Future, a nonprofit organization developed by Blue Origin to help inspire young students around the world to pursue careers in Science, Technology, Engineering, and Math (STEM), and to visualize the future of life in space.

Following the safe return of the Crew Module, all payloads will be removed for inspection and data collection.

The NS-13 mission is expected to be one of the last uncrewed flights of New Shepard before Blue Origin allows paying customers to fly, with the first crewed launch on the New Shepard 4 (NS4) vehicle likely taking place no earlier than 2021.

While Blue Origin has not begun selling tickets these first crewed flights, the company is set to charge in the hundreds of thousands of dollars for these initial tickets, per several unconfirmed media reports in recent years.  Nevertheless, Blue Origin has not released any information on ticket prices, and the last update from the company indicated that tickets would go on sale last year (2019) with passenger flights beginning shortly thereafter.

In the meantime, Blue Origin has also been developing their portion of the “National Team” Human Landing System, also known as the Integrated Lander Vehicle (ILV). The National Team – comprised of Blue Origin, Lockheed Martin, Northrop Grumman, and Draper Labs – is currently in competition with fellow aerospace entities Dynetics (who is developing the Dynetics Human Landing System, or DHLS) and SpaceX (who have submitted a version of their Starship vehicle that is catered to lunar missions) to construct a functional lander for use on future trips to the Moon as part of NASA’s Artemis program.

Blue Origin is the National Team prime contractor, lead program manager, and developer of the ILV’s Descent Element. Lockheed Martin is responsible for work on the Ascent Element, while Northrop Grumman is developing the lander’s Transfer Element (a vehicle that delivers the landing system into low lunar orbit before the final descent). Draper Labs leads descent guidance and will provide flight avionics for the ILV.

So far, the National Team has announced the delivery of a full-size engineering mockup of their lander to NASA’s Johnson Space Center for operations testing and design verification, as well as the completion of a critical System Requirements Review that marks the baselines for mission, vehicle, and ground segment requirements.

The completion of these milestones has allowed the National Team to drive onward with the development of the vehicle they hope will land the return people on the surface of the Moon — specifically the lunar south pole — as part of the Artemis III mission that is tentatively scheduled to launch no earlier than 2024.

Blue Origin has also moved forward with the construction of their next launch site at the Cape Canaveral Air Force Station in Florida, which will play host to flights of the company’s New Glenn, reusable, orbital rocket.

Recent photos from onlookers located in and around the Cape have noted further progress on work at Launch Complex 36, including the construction of large lightning protection system towers and the near-completion of the Horizontal Integration Facility, which will house New Glenn rockets before flight.

The debut of New Glenn has no firm date or even a target announced by Blue Origin; however, the rocket is currently slated to fly no earlier than 2021.