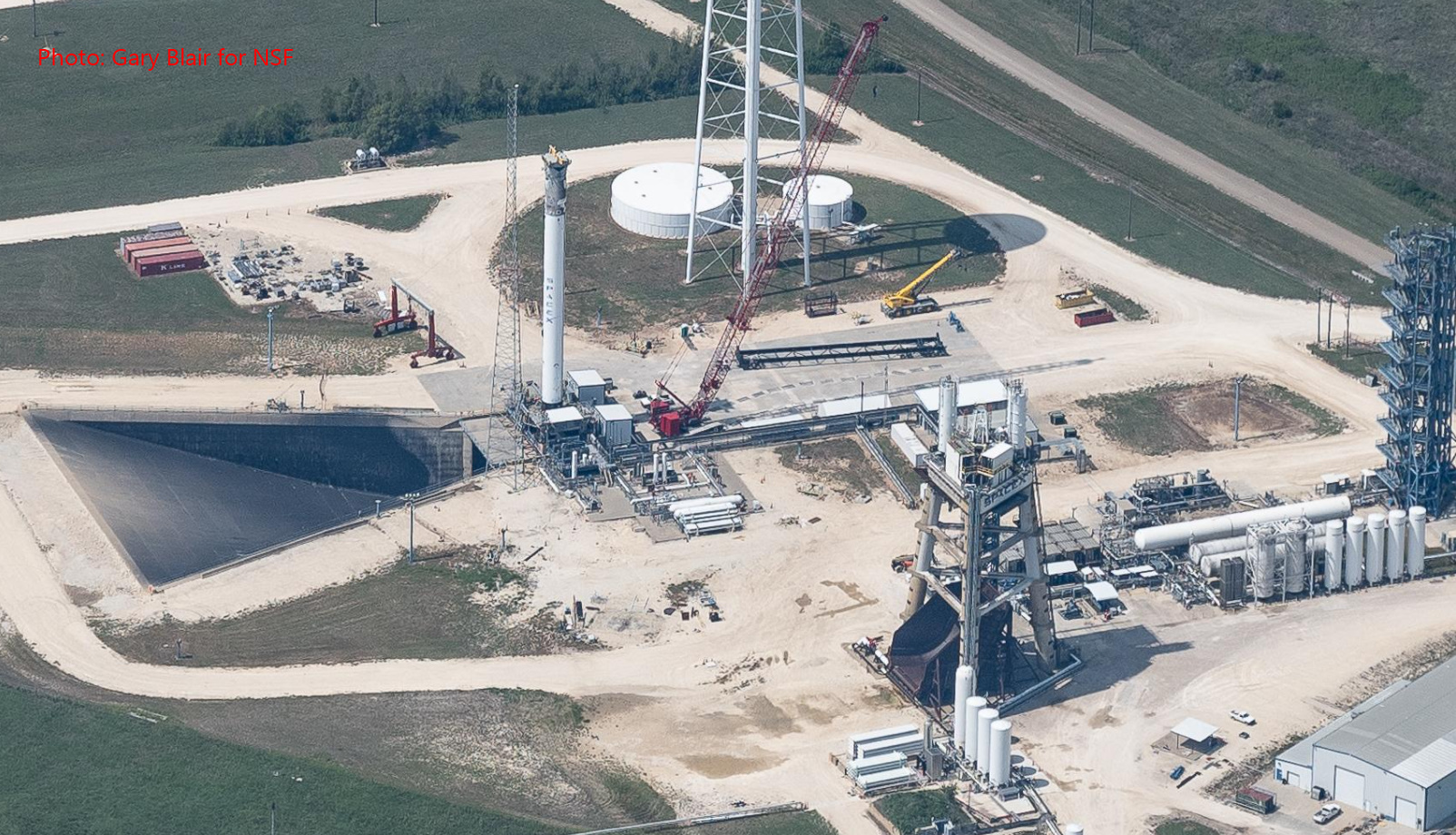 A new Falcon booster has been installed on the test stand at SpaceX’s Rocket Development and Test Facility in McGregor, Texas. Based on the logos and hardware on the exterior of the booster, the stage has been identified as a Falcon Heavy side booster, slated to support the next flight of SpaceX’s heavy lift rocket early next year.

This is not the first time that a booster has arrived at McGregor in a strange configuration, and likely points to some special testing that will be conducted using this booster before it is configured for its actual mission. The role of this booster could not be identified the usual way, but other features spotted on the booster indicate that it is a Falcon Heavy side booster.

Since the debut of the Block 5 configuration for Falcon 9 and Falcon Heavy, center cores have had the Falcon Heavy logo and an American flag painted on the white interstage, with no SpaceX logo down the side of the core. Side boosters have had the SpaceX lettering down the side of the booster. Falcon 9 cores have the Falcon 9 logo and an American flag just below the interstage, and SpaceX lettering.

The new booster spotted in McGregor has no Falcon 9 logo or American flag, and has the SpaceX logo on the side, the paint scheme of a Falcon Heavy side booster. Presumably, after the testing requiring an old interstage is completed, B1064 will receive its nosecone. 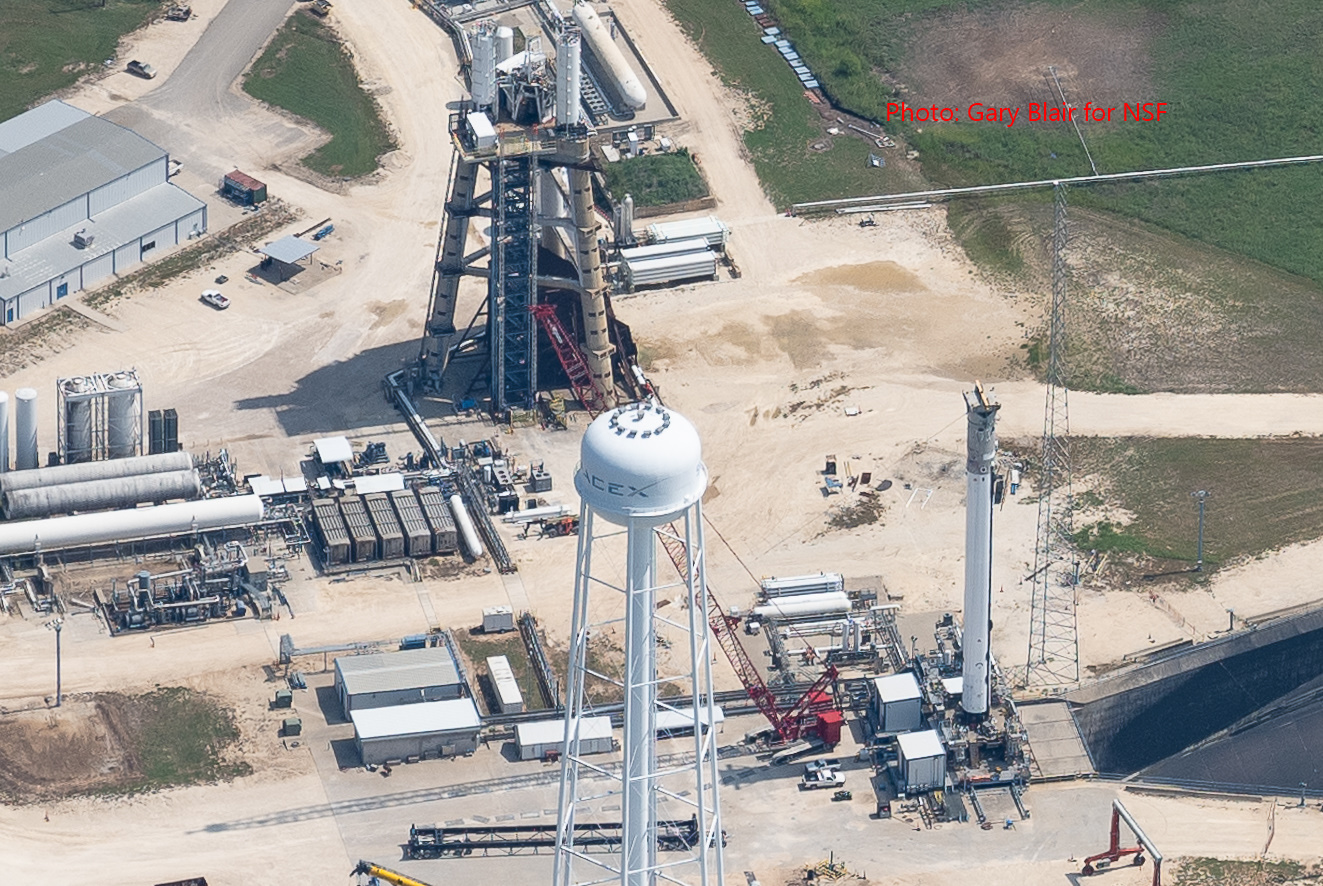 Another feature which confirms that the stage is a Falcon Heavy side booster is the visible attachment points for landing legs and grid fins, the hardware necessary to land the booster propulsively after launch. This hardware is only expected on the side boosters, as the next Falcon Heavy flight will expend the center core due to the mission’s performance requirements.

The mission, USSF-44, is scheduled to launch no earlier than February 28, 2021. The classified payload for the United States military will be delivered directly to Geostationary Orbit. As a result, the center core will be intentionally expended, and SpaceX will only attempt to recover the side boosters. Due to the mission’s performance requirements, the side boosters are expected to land on SpaceX’s two Autonomous Spaceport Drone Ships, Of Course I Still Love You and Just Read the Instructions, stationed downrange in the Atlantic Ocean.

On Falcon Heavy’s three flights to date, the side boosters have performed Return to Launch Site (RTLS) landings at Landing Zones 1 and 2 at Cape Canaveral Air Force Station, just a few miles south of the rocket’s launch pad at the Kennedy Space Center. On those same flights, the center core has attempted to land on a drone ship downrange. Only one of these three center core landing attempts have resulted in a successful touchdown, with core B1055 landing on Of Course I Still Love You after the Arabsat-6A mission. However, recovery teams were unable to secure the booster in rough seas, and the core tipped and was destroyed.

As a result, the only active Falcon Heavy stages in the SpaceX fleet are B1052 and B1053, the side boosters which launched both the Arabsat-6A and STP-2 missions. These boosters will not be reused on the USSF-44 mission, however, as the United States Department of Defense is the only SpaceX customer which still requires new boosters for their missions. 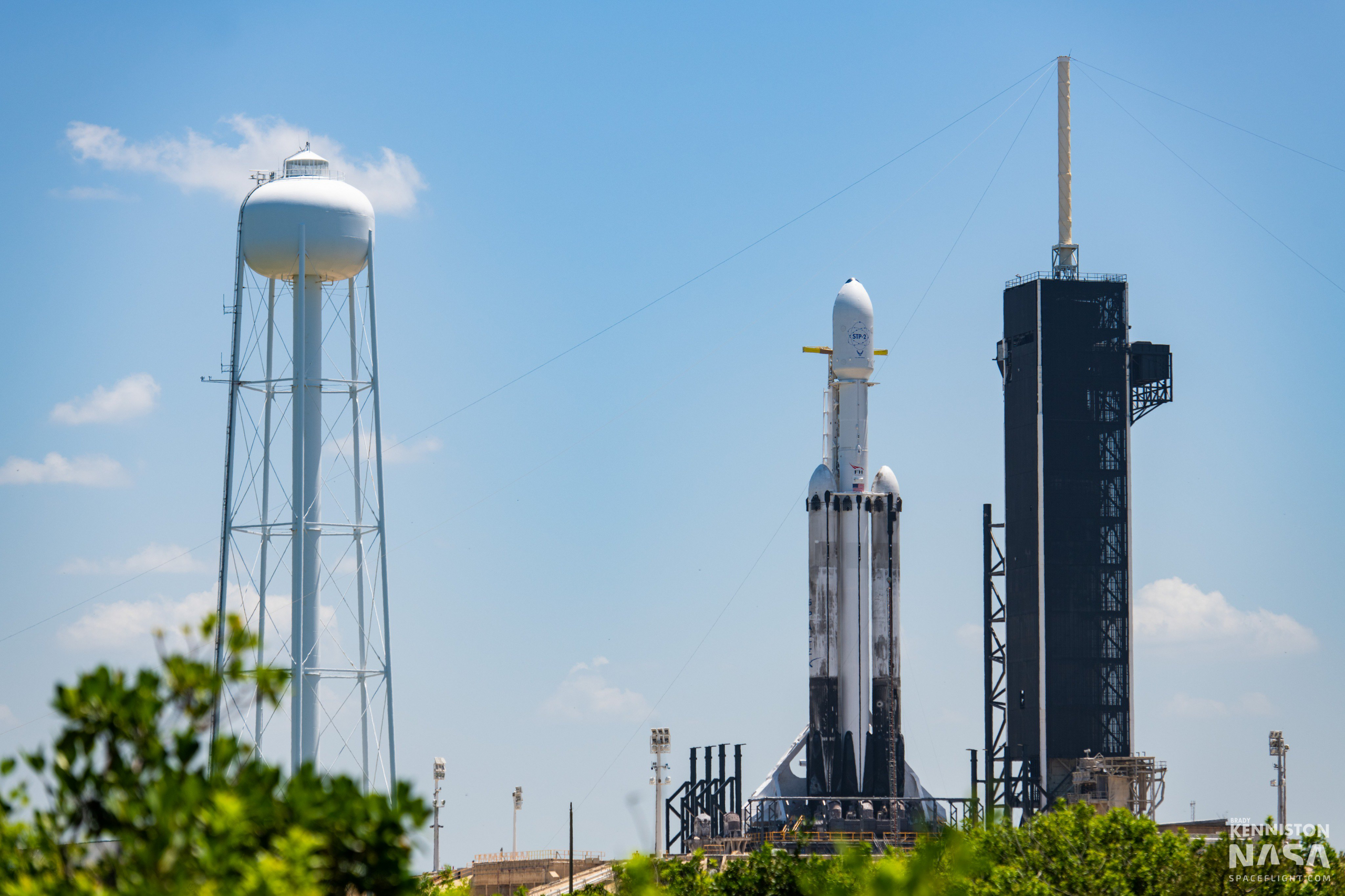 Falcon Heavy at LC-39A ahead of the STP-2 mission, showing the reused B1052 and B1053 side boosters – via Brady Kenniston for NSF

This requirement suggests the next boosters through McGregor, B1065 and B1066, will also be Falcon Heavy stages for the USSF-44 mission. The following Falcon Heavy mission, another classified payload named USSF-52, will also require three new stages. That mission is expected to enable the recovery of all three stages: both side boosters and the center core.

If all booster recovery efforts on these missions are successful, this will grow SpaceX’s fleet of Falcon Heavy stages to six side boosters and a single center core. This fleet will be able to support the following Falcon Heavy missions which are not for the Department of Defense. This manifest includes a ViaSat-3 commercial communications satellite and the Psyche asteroid mission for NASA. Following a third military mission, USSF-67, the first awarded under Phase 2 of the National Security Space Launch (NSSL) program, Falcon Heavy will also support NASA’s Artemis program.

Falcon Heavy is expected to be selected to launch the initial phase of NASA’s Lunar Gateway. SpaceX’s Dragon XL spacecraft, used to deliver cargo to the Gateway, will also fly at least two missions launched on Falcon Heavy under the Gateway Logistics Services (GLS) program. There are also multiple Falcon Heavy launch options for other commercial satellites, and the launcher will likely be selected for additional national security missions under NSSL Phase 2. 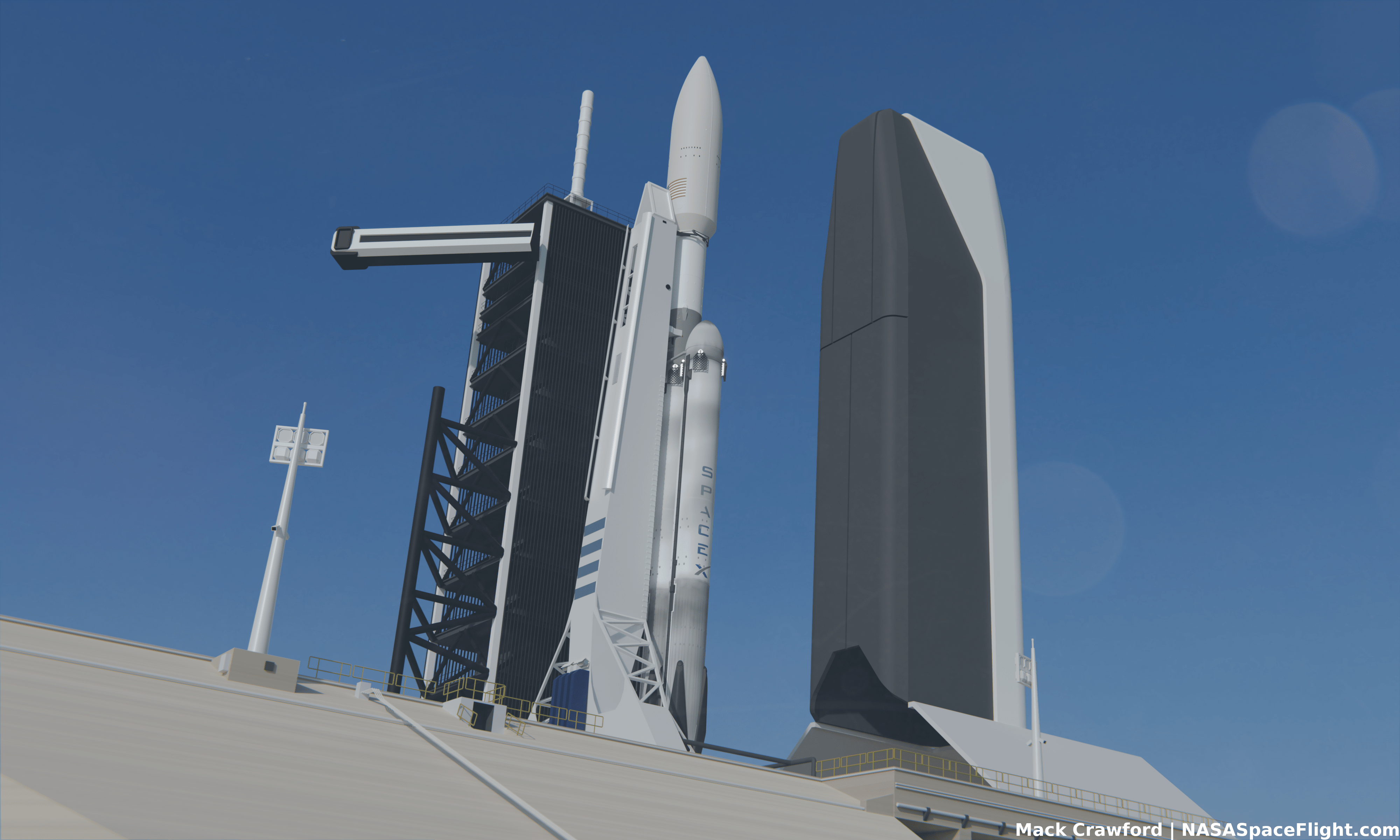 Rendering of Falcon Heavy at LC-39A with an extended payload fairing, needed to launch the Lunar Gateway and several NSSL Phase 2 missions – via Mack Crawford for NSF/L2

The Falcon 9 manifest for the remainder of 2020 and beginning of 2021 also features a combination of new and reused boosters. B1061 is at the Kennedy Space Center awaiting the first operational launch of Crew Dragon, the Crew-1 mission, launching no earlier than October 23. This may be the last Crew Dragon mission to launch on a new booster, as B1061 will be reused on the Crew-2 mission in 2021. Crew-2 will also utilize a reused Dragon spacecraft, flying the Dragon Endeavour capsule which supported the Demo-2 test flight. All following Crew Dragon missions are permitted by NASA to use reused first stages and Dragon capsules.

Starlink missions on reused boosters will continue alongside external customer missions into October. NASA’s Sentinel-6 spacecraft will launch on the debut flight of B1063 and be SpaceX’s first launch from Vandenberg Air Force Base in California since June 2019, launching no earlier than November 10.

Also scheduled for 2020 is the debut flight of Cargo Dragon 2, the CRS-21 mission, launching no earlier than November 15. The first Sun Synchronous Orbit launch for SpaceX’s Rideshare Program, and the second launch to utilize the newly reopened polar launch corridor from Florida, is expected later this year. A pair of commercial satellites, Turksat-5A and SXM-7, are also on the near-term manifest. All of these missions will likely fly on reused boosters.