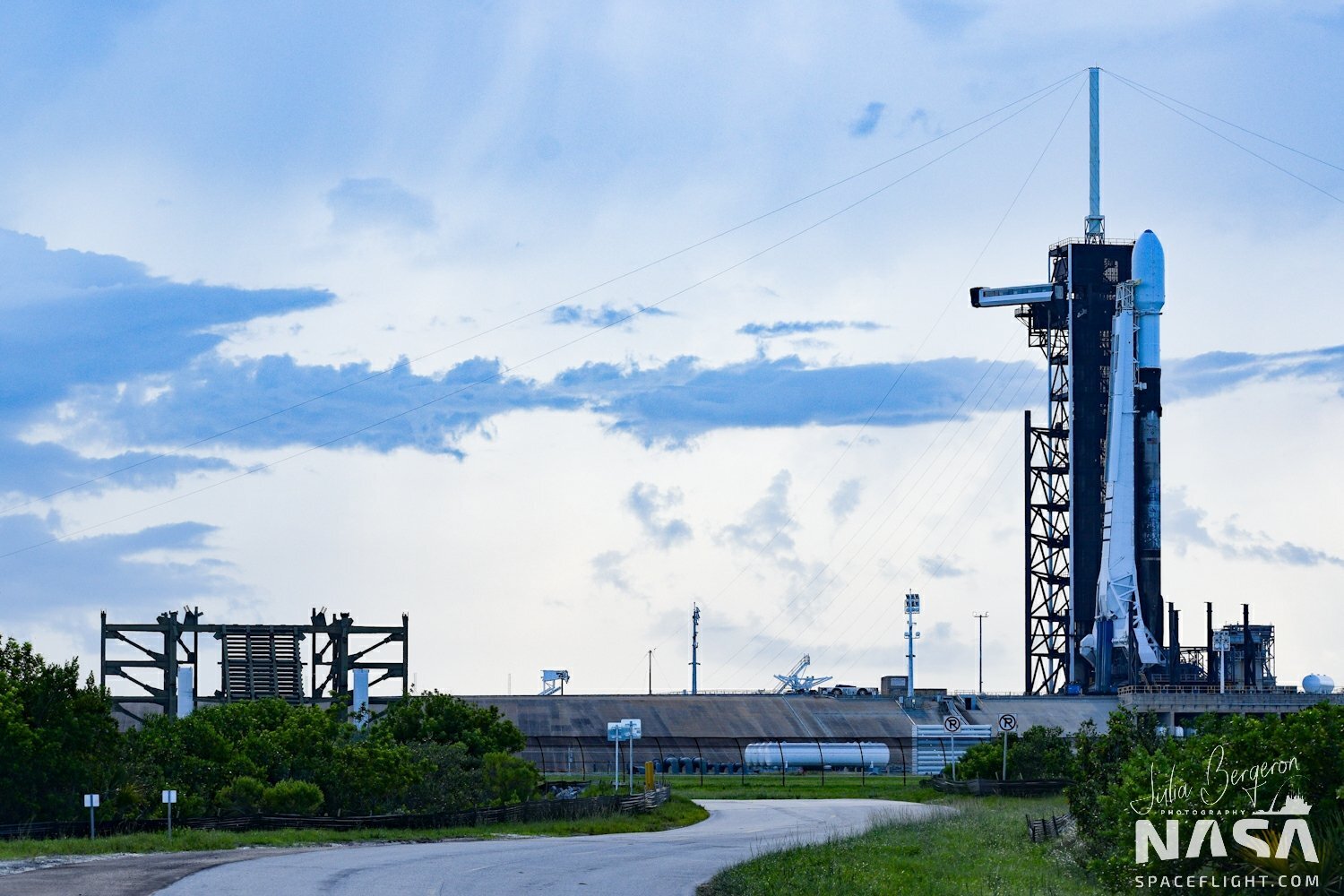 As SpaceX continued to roll through its 2020 launch campaign, the company was slated to launch another batch of Starlink internet satellites to help complement the current constellation in low Earth orbit. The mission was set to launch on a flight-proven Falcon 9 rocket from historic LC-39A on Thursday morning.

Starlink V1.0 L11 was also set to be the 100th mission launched by SpaceX, thereby marking a major milestone in the company’s history since its conception in May 2002 and the debut flight of the Falcon 1 – the first rocket to be built by SpaceX – in March 2006.

That milestone, however, went to the SAOCOM 1B mission that jumped ahead of the queue.

Since March 2006, SpaceX has enjoyed a 95% launch success rate over the 99 flights they’ve conducted to date using their indigenously-developed Falcon 1, Falcon 9, and Falcon Heavy launchers. SpaceX hopes to carry that trend of success into the future with their next-generation Starship/Super Heavy launch system, which will help the company achieve its main aim of colonizing Mars and making humans a multiplanetary species. 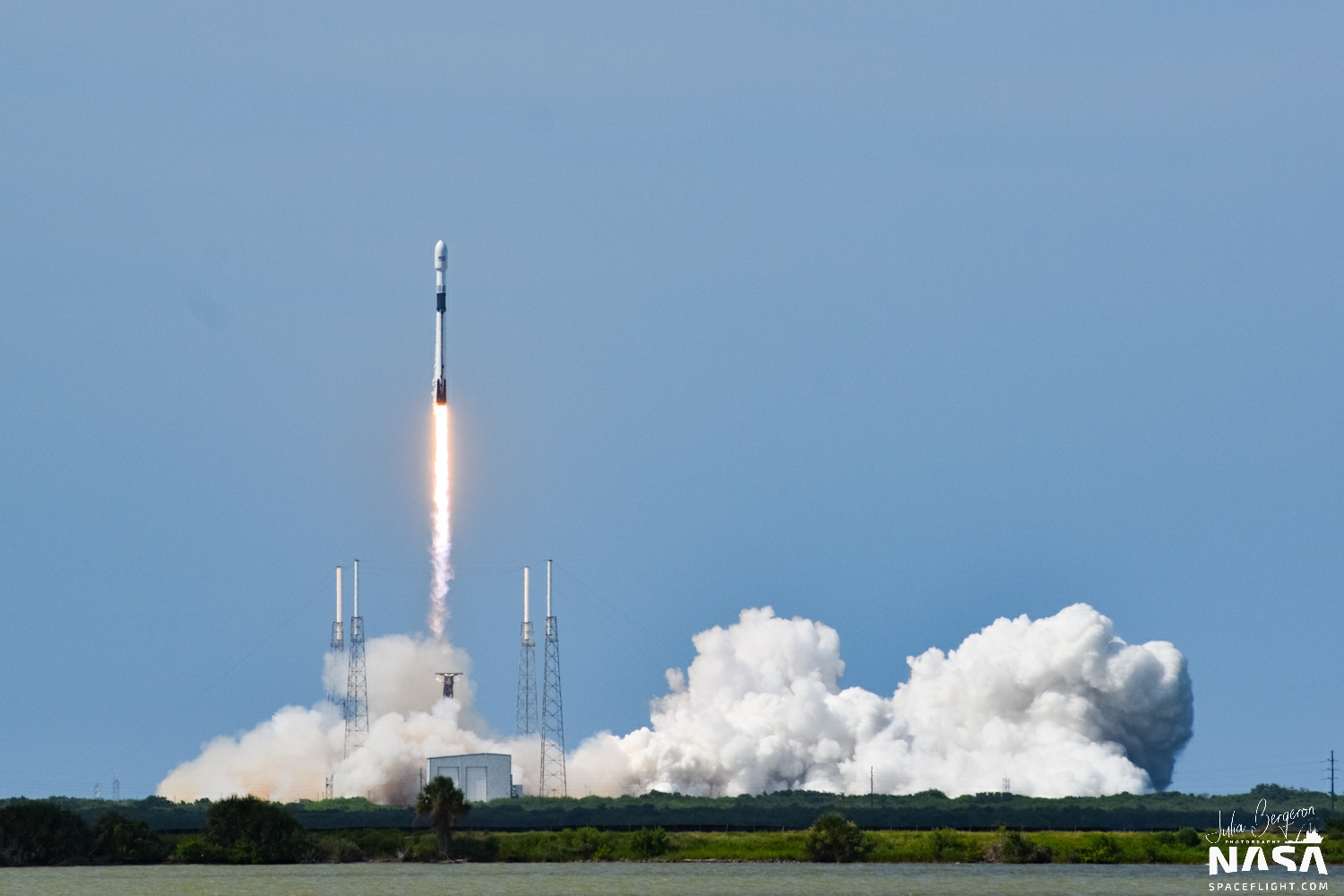 The first stage of the Falcon 9 rocket that will launch this mission is core B1060.2. This designation originates from SpaceX’s internal booster naming/numbering scheme, with B1060 being the 60th Falcon 9/Heavy booster core built by the company at their headquarters in Hawthorne, California, and the “.2” signifying that the booster has been configured for its second flight.

B1060 was previously used to launch the third GPS Block III satellite to orbit for the United States Space Force on June 30, 2020. During that mission, the booster safely landed on the deck of the droneship “Just Read The Instructions”, which was then towed back to Port Canaveral. Once safely in port, B1060 was lifted off of JRTI and taken back to SpaceX’s facilities at Cape Canaveral Air Force Station for refurbishment.

B1060 will be used once again to support this Starlink mission, which will see a full batch of 60 Starlink internet satellites deployed in low Earth orbit. 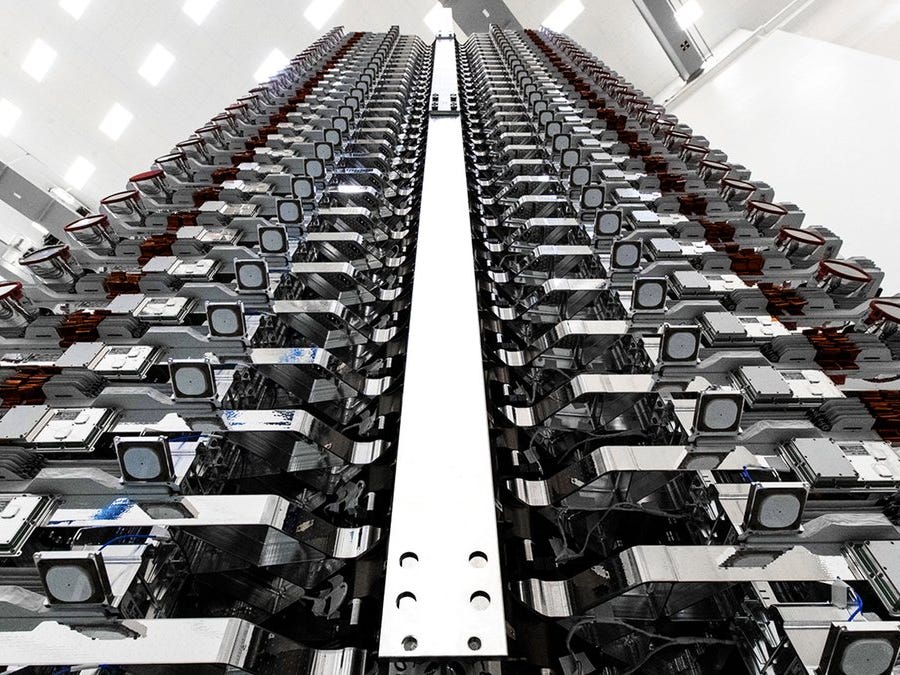 A batch of 60 Starlink satellites, fully stacked and ready for launch – credit: SpaceX

SpaceX has begun to offer the opportunity to test the beta version of the Starlink internet service to private users, with public beta testing set to be offered later this year. Updates on beta testing will be provided on the company’s website.

Like on previous Starlink missions, each Starlink satellite will also feature a sun shade, or visor, which will block sunlight from reflecting off of the majority of the spacecraft body while in orbit and reducing its overall albedo/intrinsic brightness as observed from the ground. These visors will deploy shortly after spacecraft separation. 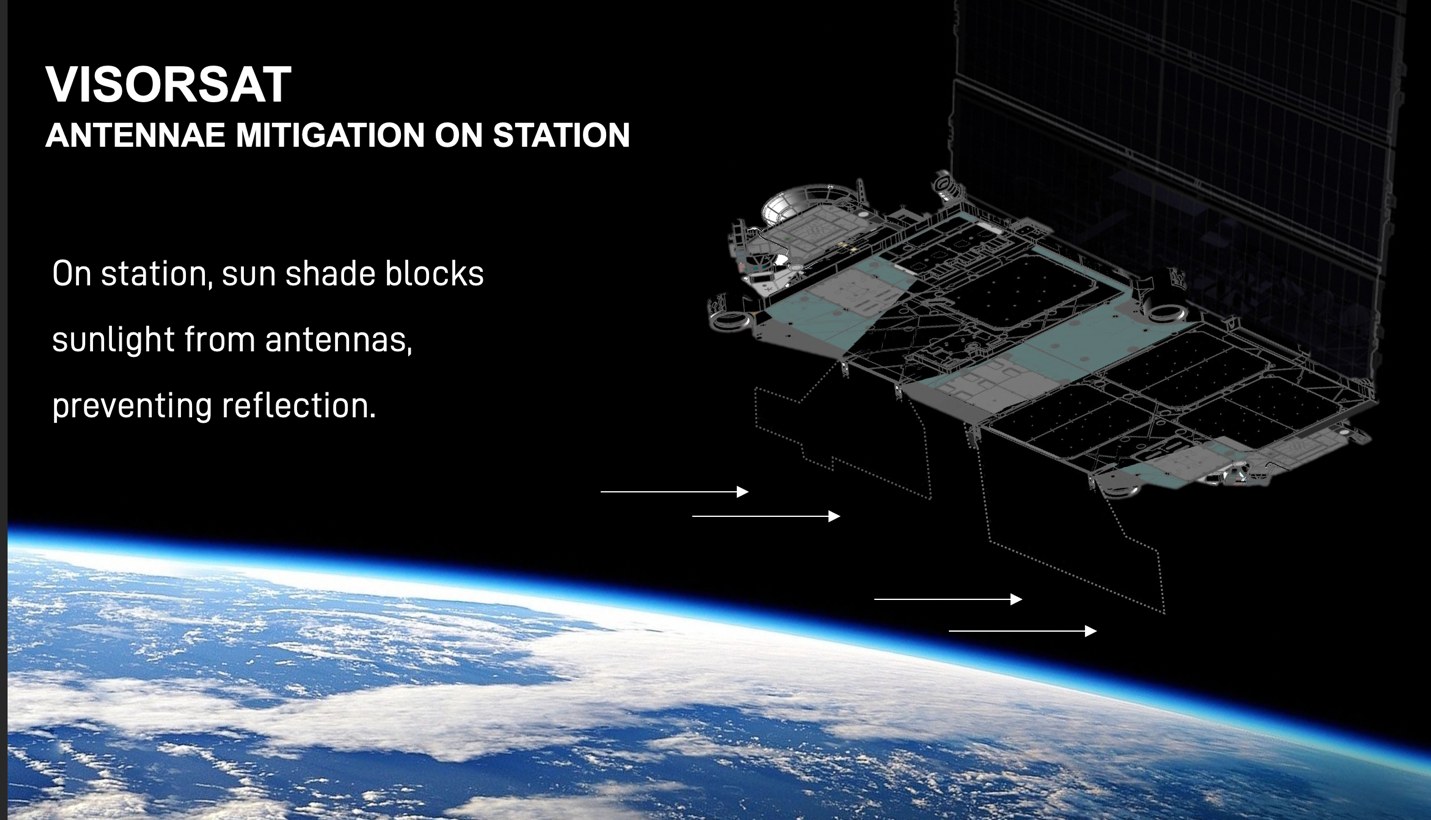 Each operational Starlink satellite weighs in at approximately 260 kilograms (573 pounds), which leads to a full batch of Starlinks weighing in at about 15,600 kilograms (34,380 pounds) at liftoff. These are some of the heaviest payloads that can be launched on a Falcon 9 when in its reusable configuration.

The countdown will officially commence at the T-38 minute mark, when the launch director will poll the mission teams to proceed into propellant loading operations. When the “go” is given, chilled RP-1 fuel (a high-grade form of kerosene) will flow into both stages of the Falcon 9 launch vehicle starting at 35 minutes before liftoff, along with liquid oxygen (LOX) loading into the first stage. LOX loading onto Falcon 9’s second stage will start at T-16 minutes.

At T-7 minutes prior to liftoff, the liquid oxygen pre-valves on the nine Merlin-1D first stage engines will open, thereby allowing LOX to flow through the engine plumbing and condition the turbopumps for ignition. This process is known as “engine chilling”, and is used to prevent thermal shock that could damage the motors upon startup.

At the T-1 minute mark, the Falcon 9’s onboard flight computers will run through final checks of the vehicle’s systems and finalize tank pressurization before flight. The launch director will give a final “go” for launch at T-45 seconds if all conditions are met.

The nine Merlin-1D engines on the first stage will ignite at T-3 seconds, with liftoff taking place at T-0 following a quick final check by the onboard computers to verify that all systems are operating nominally. 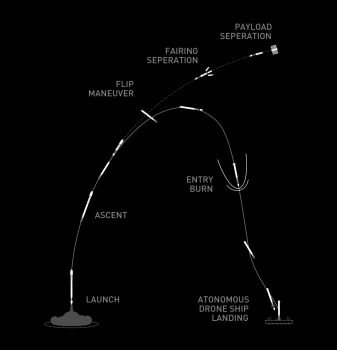 After lifting off from LC-39A, Falcon 9 will begin pitching downrange as it accelerates towards orbital velocity. At around 1 minute and 12 seconds into the flight, the vehicle will pass through the region of maximum aerodynamic pressure, or “Max-Q”. During this portion of flight, the mechanical stresses on the rocket are at their highest.

The nine Merlin-1D engines on Falcon 9’s first stage will continue to burn until around T+2 minutes and 32 seconds, at which point they will all shut down simultaneously in an event known as MECO, or Main Engine Cutoff. Stage separation will occur shortly afterward, with second stage Merlin Vacuum engine ignition set to take place at the T+2 minute 43 second mark. Upon engine startup, the second stage will continue to carry the 60 Starlinks to a low Earth orbit, with an inclination of 53 degrees.

The Falcon 9 rocket’s 5-meter payload fairing, which housed the payloads during the initial phases of launch, will deploy at approximately 3 minutes and 12 seconds into the flight. After separation, both halves of the fairing will descend back to Earth to be recovered by GO Ms. Tree, one of the two ships that SpaceX has at their disposal for fairing recovery operations (the other being GO Ms. Chief).

While Falcon 9’s second stage and the Starlink payloads continue to press onward to low Earth orbit, Falcon core B1060.2 will return to Earth to attempt to conduct a propulsive landing on the droneship “Of Course I Still Love You”, stationed approximately 630 kilometers (391.4 miles) downrange from the launch site.

The first stage will perform an entry burn at around 7 minutes into the flight, in order to slow its descent and refine its trajectory to the droneship. The final landing burn will be completed at the T+8 minute 19 second mark, with B1060.2 attempting to touch down softly on the deck of OCISLY under the power from a single Merlin-1D engine.

The Merlin Vaccum engine on Falcon 9’s second stage will shut down at 8 minutes and 51 seconds into the flight, in an event known as SECO, or Second Engine Cutoff. This will be the only second stage engine burn of the mission.

At approximately 14 minutes and 47 seconds into the flight, the full batch of 60 Starlink satellites will be deployed all at once. This marks the completion of the launch phase of the mission.

At this point, SpaceX will begin conducting data reviews of each Starlink satellite to ensure that all systems are working as intended before proceeding to orbit raising operations. Any satellites that are unable to raise their orbits will be left in the initial deployment orbit, so as to quickly deorbit and decrease the risk of a collision.

The Starlink V1.0 L11 mission is part of a double-heading, with SpaceX is also looking to conduct a 150 meter up-and-down hop test with their Starship SN6 prototype vehicle at their launch and production facility in Boca Chica, Texas, as soon as Sunday. The vehicle is currently equipped with a series of reaction control system (RCS) thrusters and a single Raptor engine (Raptor SN29), which will propel the Starship vehicle off of its launch mount, into the air, and down towards the landing pad located next to the launch site.

SN6 is aiming to become the third Starship vehicle to conduct a successful test flight, with the two others being the Starhopper testbed (which performed a series of hop tests in July and August 2019, respectively) and the Starship SN5 prototype (which safely flew to 150 meters on August 4, 2020).

SpaceX is also pressing towards the launch of the fourth GPS Block III satellite, which is scheduled to fly on a Falcon 9 from Space Launch Complex 40 at the Cape Canaveral Air Force Station in Florida no earlier than September 30. Like all previous GPS satellite launches on Falcon 9 rockets, this mission will utilize a new Falcon 9 first stage booster, which is slated to be B1062.1.

SpaceX is still aiming to launch a total of 24 Starlink missions before the end of 2020.