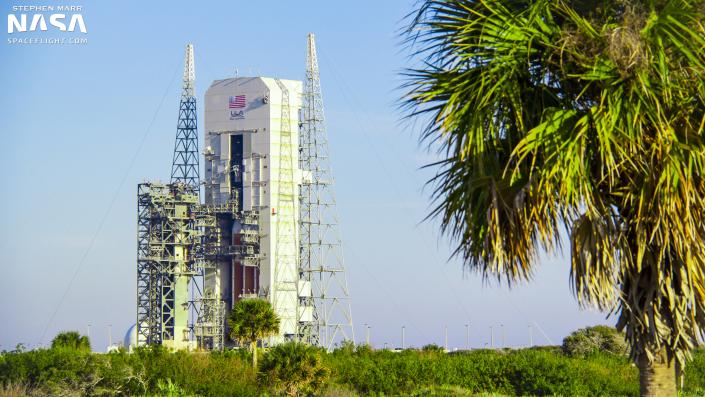 United Launch Alliance is proceeding through countdown operations for the launch of their Delta IV Heavy rocket with a classified National Reconnaissance Office (NRO) payload, code named NROL-44. Liftoff is targeted for 18:15 EST (23:15 UTC) on Thursday, 10 December — with the overall launch window extending until 22:30 EST (03:30 UTC) that same night.

The flight will mark the first Delta IV mission since the Medium+ variant retired in August 2019 and the first Delta IV Heavy since January 2019. Although ULA is phasing out the Delta IV in favor of its Vulcan rocket, the Heavy configuration has five contracted missions through 2024.

The mission has seen a prolonged launch campaign that has so far resulted in two last-second aborts — one after the three RS-68A core engines had begun their ignition sequences.

After rolling to the pad in November 2019 and undergoing a Wet Dress Rehearsal in January 2020 designed to identify issues with the rocket and pad so that the launch proceeds smoothly, the flight reached its first launch attempt on 27 August 2020. This attempt ended without fueling of the vehicle after a heater and pneumatic issue forced controllers to scrub the launch.

The second attempt was originally set for 28 August before being pushed to 29 August when engineers needed more time to solve the pneumatics issue. The second attempt saw the Delta IV Heavy fueled before a temperature issue on the rocket forced the teams to push into the launch window that day.

The issue was eventually resolved and teams cleared the rocket for launch. The engine start sequence began at T-7 seconds with ignition of the starboard booster’s RS-68A engine, followed two seconds later by ignition sequence start of the core and port boosters’ RS-68A engines.

At T-3 seconds, a Terminal Countdown Sequencer Rack initiated an automatic abort, shutting down the three RS-68A engines and triggering a series of safing procedures to place the Delta IV Heavy into a safe and stable configuration for post-hot fire abort safing and detanking.

The cause of the abort was first traced to a “high volumetric flow rate pressure regulator [that] did not open,” said Tory Bruno, CEO of ULA. Further investigation revealed the regulator failure occurred when a diaphragm tore. There are three regulators total, and all three, according to Tory, were replaced during the first stand down period.

After fixing that issue and setting another target date, ULA then encountered a swing arm retraction system issue and two scrubs due to pre-launch weather and a hydraulics issue on the Mobile Service Tower.

This all led to an attempt on 30 September 2020, in which additional anomalies were seen with pad SLC-37B’s swing arms that must pull away from the rocket at liftoff.  That issue was resolved, and all teams polled “GO” for launch at 23:54 EST.

This time, the start sequence of the three RS-68A engine started with a large dump of gaseous hydrogen from the engines to condition them for ignition — however, the entire process and countdown was aborted again, this time at T-7 seconds just before the engine ignition sequence started.

A faulty sensor erroneously reported a valve in one of the RS-68A engines had not moved to flight position when it had indeed done so; however, a major post-second-abort review identified issues with pad hydraulics that needed to be fixed.

That hydraulic issue was later confirmed by ULA to be with the swing arm retraction system; a fix for the issue would take over two months to implement, verify, and certify for flight.

Coming along. We are working through the hydraulics on the swing arms, replacing several dozen valves, a couple thousand gallons of hydraulic fluid, and several other important items. We will set a flight date soon. Mission success is the priority. https://t.co/PSDFg4FrKX

Meanwhile, SpaceX, which had already moved launches around to accommodate this mission’s delays, set up for and was granted Range approval for a 10 December launch of the Falcon 9 with the SXM-7 commercial satellite.  ULA then requested the same day for NROL-44.

As the two launch times were too close to enable dual-launch support, the Range ultimately relinquished their approval to SpaceX and gave the launch day to ULA due to the national security component of the NRO satellite.

NROL-44 payload is owned by the National Reconnaissance Office (NRO), the US Government agency responsible for operating America’s fleet of spy satellites. Although details of NRO spacecraft are officially classified, many pieces of information about previous missions have slipped into the public domain. From these, coupled with what has been revealed about NROL-44, a fairly clear picture of the satellite’s likely identity and role can be extrapolated.

The NRO operates satellites that fill a variety of roles – including optical and radar imaging of Earth’s surface, detection and tracking of ships on the high seas and interception of radio signals and communications. The two types of satellites which require the largest rockets are a series of optical imaging satellites – known as Crystal – and a series of large signals intelligence (ELINT) satellites known as Orion. Crystal satellites typically operate in near-polar sun-synchronous orbits, while Orions operate in an equatorial geostationary orbit.

Despite the top-secret nature of the mission, Notices to Airmen (NOTAMs) and Mariners (NOTMARs) must be published before every rocket launch. These include an immediate hazard area around Cape Canaveral, as well as areas downrange where debris may fall as the rocket sheds its lower stages and payload fairing on the way uphill. These hazard areas show Delta IV Heavy will be heading in an easterly direction out over the Atlantic Ocean – and is therefore almost certainly heading to a geostationary orbit. 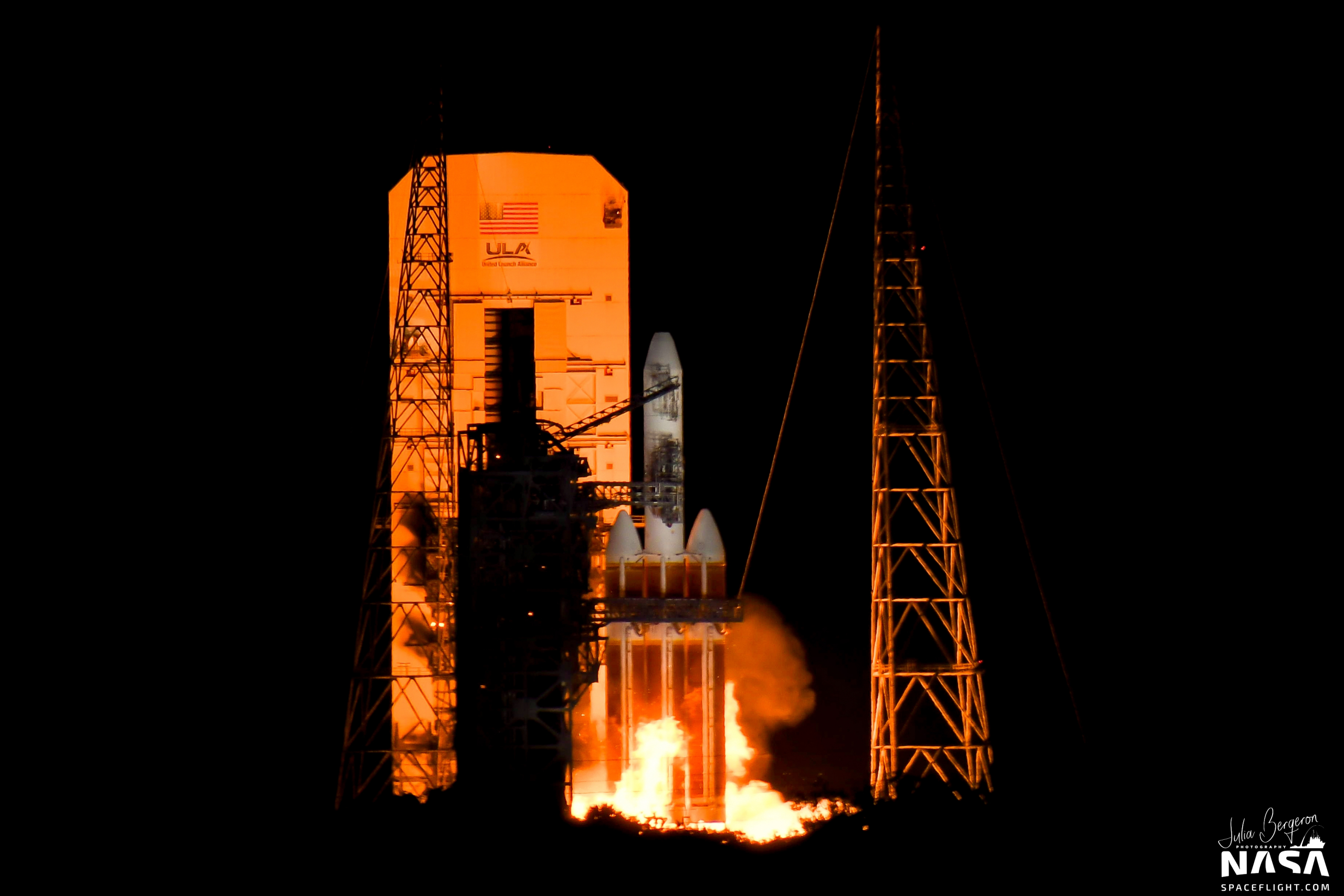 With this established, there is little doubt that the NROL-44 payload is either a continuation of or successor to the Orion satellites.

Two larger, second-generation Orion satellites were deployed in May 1995 and May 1998 via Titan IV rockets. Another Titan launch occurred in September 2003 carrying a further-upgraded third-generation satellite.

As Orion has evolved, it is believed to have taken on the roles of other NRO signals intelligence programs – most notably that of the Mercury communications intelligence (COMINT) system. This function, intercepting audio and textual communications between people, has been reported to have now become the satellites’ primary mission. Later-series satellites are sometimes unofficially known as “Advanced Orion”.

The four principal satellites currently in service were launched by Delta IV Heavy rockets between 2009 and 2016. Designated USA-202, 223, 237 and 268 – and launched as NROL-26, 32, 15 and 37, respectively – these spacecraft are likely assisted by several of their older siblings which may remain in service.

NROL-44 is likely a replacement for the eleven-and-a-half-year-old USA-202, with the displaced satellite taking on a reserve role in the constellation – either providing auxiliary data collection or serving as an on-orbit spare. This will likely be the start of a new wave of Orion launches, with the NROL-68 and NROL-70 missions slated to fly from the Cape aboard Delta IV Heavy missions in 2022 and 2024 as probable candidates for the next flights. 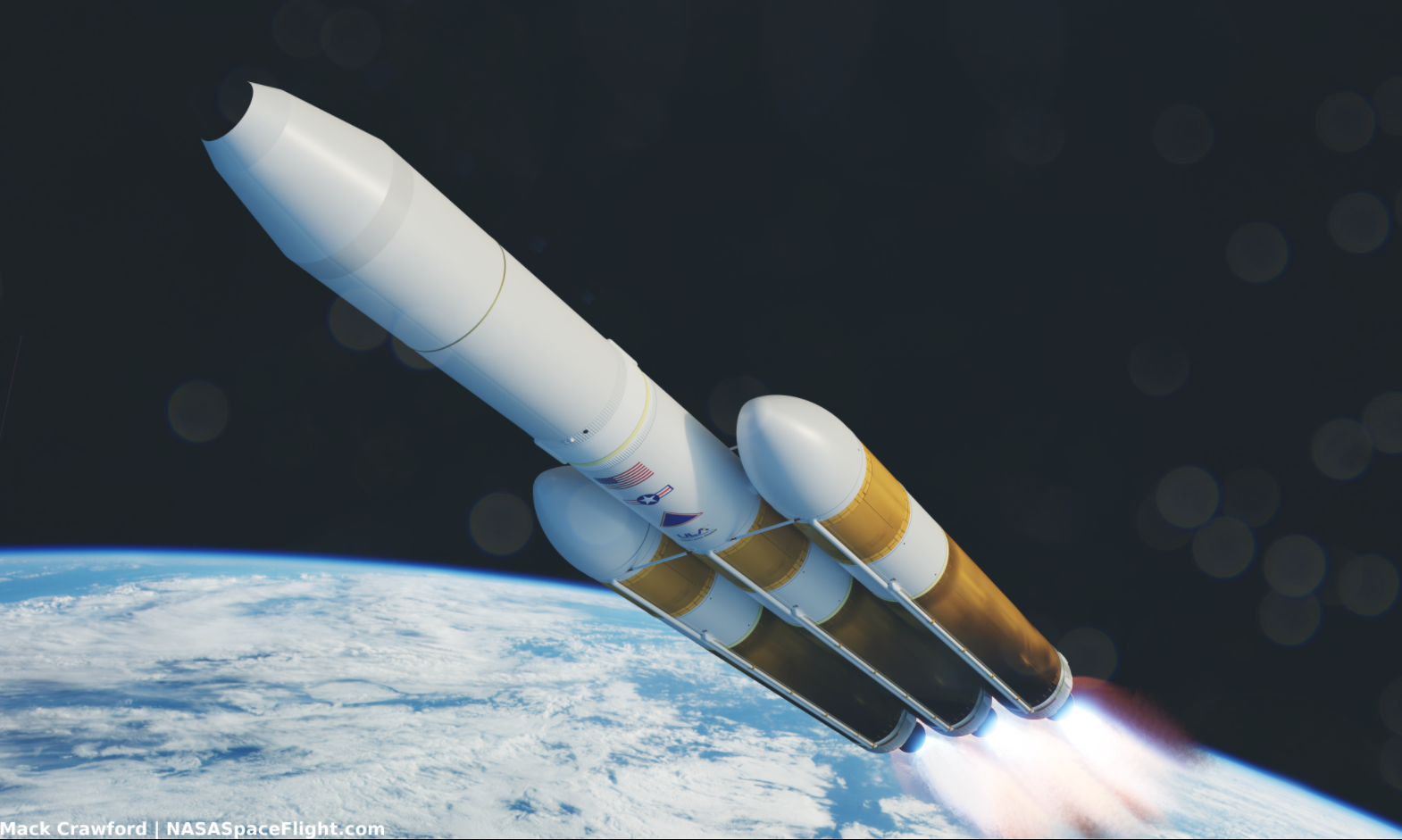 It is not clear whether these spacecraft are additional third-generation Orion satellites, or part of a new generation.

Since 2006, the numbers have been assigned sequentially to satellites in order of their launch. The most recent satellites to receive USA designations were the four satellites – USA-305 to 308 – launched on the NROL-129 mission in July 2020.

The launch will be carried out by United Launch Alliance, a company formed in 2006 to provide launch services to the U.S. government, which took over the Atlas V program from Lockheed Martin and Boeing’s Delta II and Delta IV rockets.

Atlas V and Delta IV were both developed under the Evolved Expendable Launch Vehicle (EELV) program initiated in the 1990s – which is today known as National Security Space Launch (NSSL). While Boeing and Lockheed Martin were both awarded contracts, allegations of corporate espionage on the part of the former quickly came to light, and the agreement to pool their resources in ULA was part of the final settlement in subsequent litigation.

While ULA initially continued to operate Atlas V and Delta IV alongside each other in order to ensure access to space should one vehicle ever be grounded, the advent of the company’s next-generation Vulcan rocket and increased competition from rival SpaceX have seen a rationalization of this product line, with Delta IV and Altas V to be phased out in favor of Vulcan.