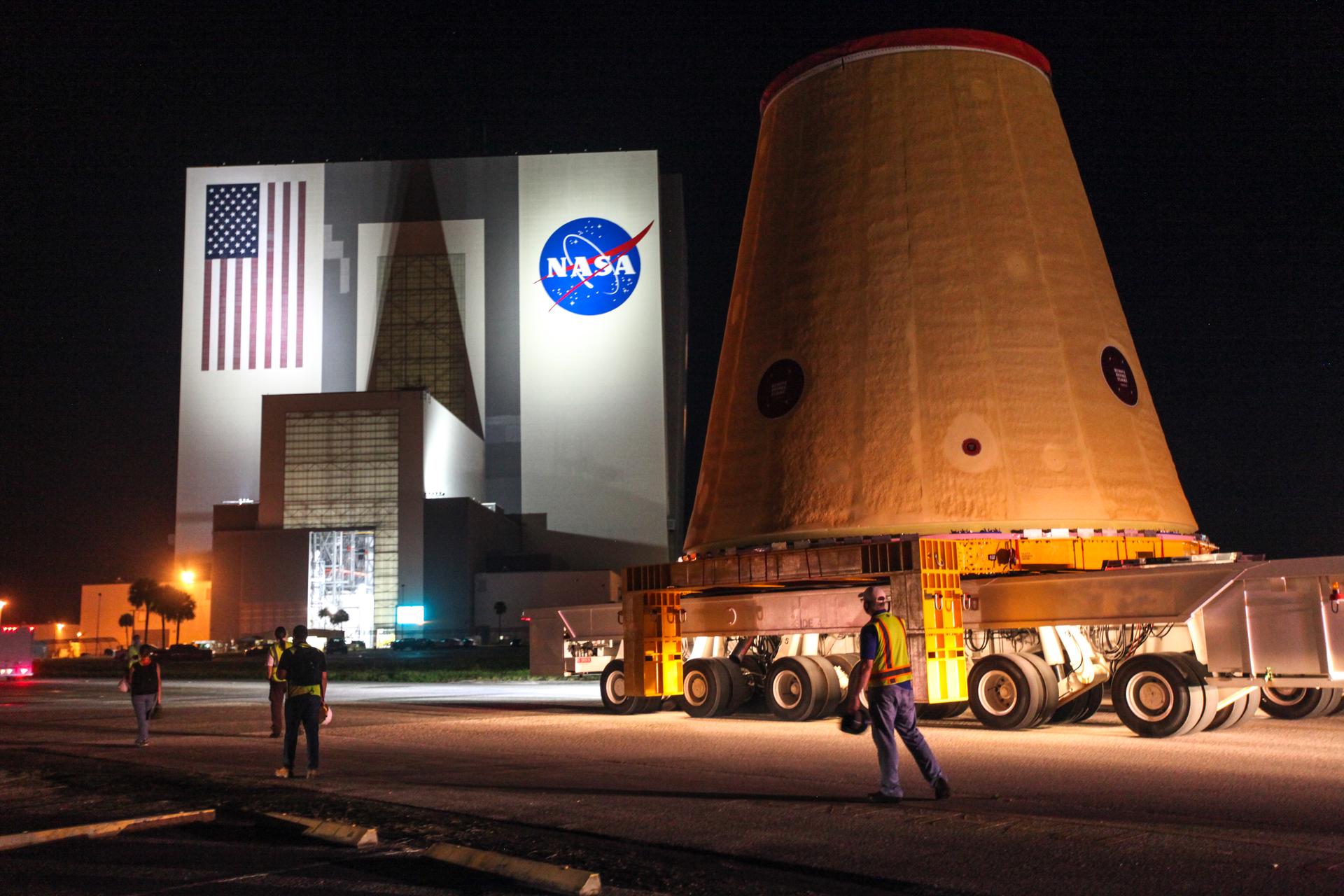 The Launch Vehicle Stage Adapter for NASA’s first Space Launch System (SLS) vehicle arrived at the Kennedy Space Center in Florida on July 29 on the agency’s Pegasus barge at the end of a delivery trip from the Marshall Space Flight Center in Alabama.

The cone-shaped interstage connector was moved into the Vehicle Assembly Building, where NASA’s Exploration Ground Systems (EGS) program and prime Test and Operations Support Contractor — Jacobs — will now perform through fit checks while waiting for the SLS Core Stage to finish its Green Run test campaign at the Stennis Space Center in Mississippi.

The Launch Vehicle Stage Adapter (LVSA) is the interstage connector for the SLS Block 1 vehicle that will make the SLS Program’s inaugural launch on Artemis 1; in both Crew and Cargo configurations, it connects the Core Stage with the Block 1 upper stage, the Interim Cryogenic Propulsion Stage. The U.S. government’s new launcher will send an uncrewed Orion spacecraft to the Moon on that vehicle’s first solo flight.

Once the Core arrives at Kennedy and is mated to the SLS vehicle’s twin Solid Rocket Boosters, the upper stage elements like the LVSA will be stacked on top of it. Those elements are also in final preparations for integration with the Orion spacecraft and the rest of the SLS rocket next year for a launch tentatively scheduled for late 2021.

Pegasus arrived at the Kennedy Space Center (KSC’s) Launch Complex 39 Turn Basin on July 29 carrying the LVSA, the penultimate piece of SLS vehicle hardware for the program’s first launch. Artemis 1 is forecast to liftoff late next year; the schedule to reach launch readiness will be driven by the final delivery, when Pegasus brings the SLS Core Stage to the launch site.

The LVSA was moved off the barge and into High Bay 4 of the VAB the next morning, where it will remain until the EGS Integrated Operations team is ready to stack it on top of the Core Stage next year.

“We bring it into the Vehicle Assembly Building in High Bay 4. Immediately we’re going to be prepping it for maintenance and storage while we wait for the rest of the vehicle components to come before we can do the stacking and integration with the vehicle,” Allison Mjoen, NASA EGS Operations Project Engineer, said in a July 21 interview. “There’s a conditioned air system and purge active for this component to make sure it stays in good workable condition for flight.”

Mjoen noted that the top and bottom of the unit are covered to allow the external air-conditioning unit to keep the inside dry and clean. “They are using that same conditioned air system as on the Pegasus barge, so when it arrives here at KSC we will turn that off and disconnect it and truck that over to the VAB where it will be set up and re-established to flow that conditioned air again,” she added. 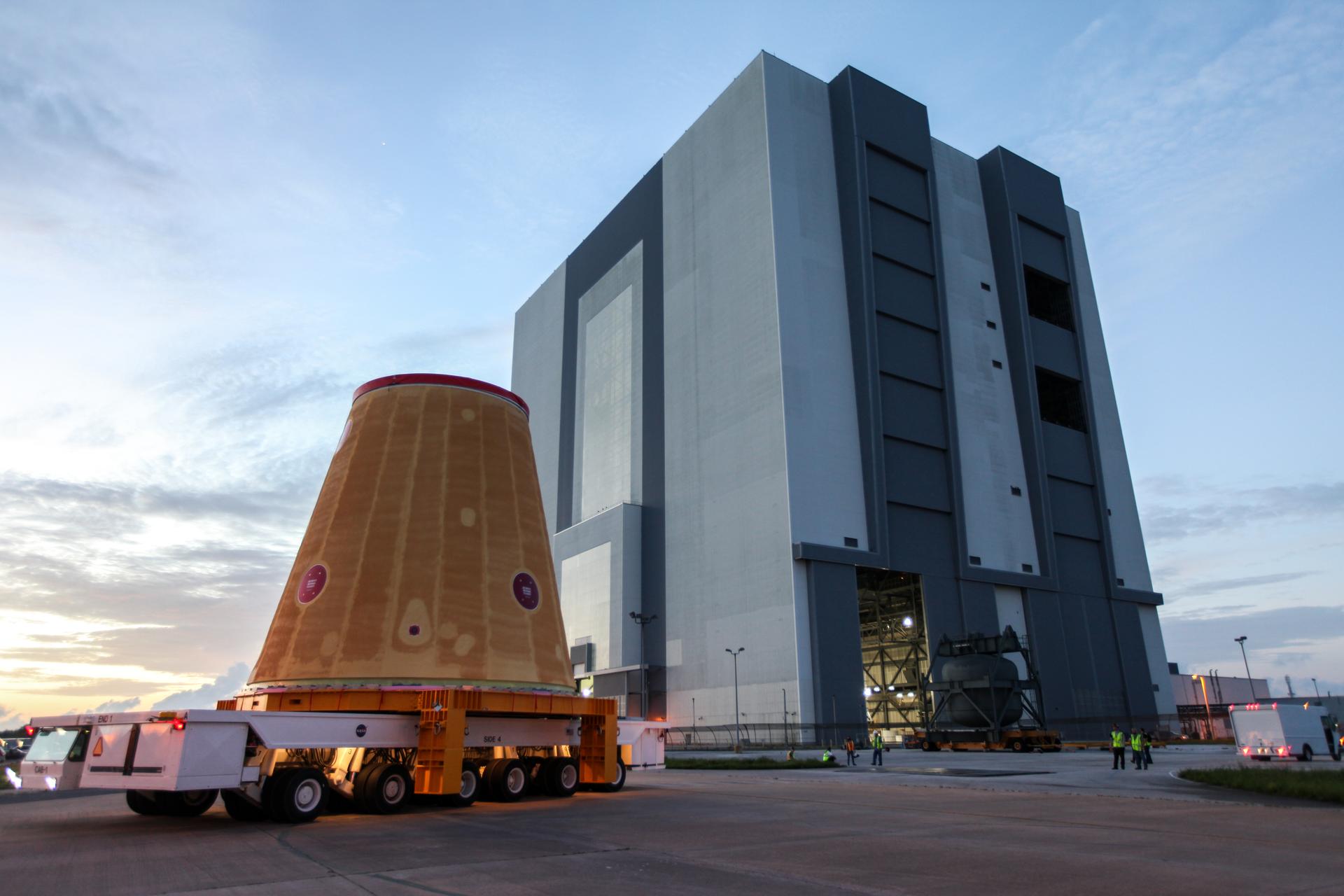 (Photo Caption: A transporter carrying the LVSA and its support stand wait for a “proof load” weight to clear the open doorway of VAB High Bay 4 early on July 30. The interstage adapter was moved from the Pegasus barge at the Turn Basin, through the Transfer Aisle in the VAB, and around to High Bay 4.)

Along with all the other SLS hardware for Artemis 1, the LVSA is the first flight unit of its kind; now that the flight hardware is at the launch site, EGS and Jacobs will take the opportunity to practice some of the integrated operations (also called “stacking”) procedures on the adapter while it sits on the floor in High Bay 4 in storage. “We have some additional ground support equipment like internal access platforms and a test stand that we want to be able to run through [installing],” Mjoen explained.

“Those are the platforms that we will be installing inside the LVSA once we’re stacked, so we’ll be doing preps like that to make sure our team is in good working order once we go into our integrated operation.”

Several access doors are built into the LVSA to allow pre-launch work inside the adaptor, which will become more cramped once the Interim Cryogenic Propulsion Stage (ICPS) is lowered inside. The pieces of the internal work platforms will pass through those doors before they are assembled inside.

“There’s a test stand that we’re going to get that will be external to the vehicle to allow us to cycle personnel through and experience [Removing and Replacing] the platform set external to the vehicle. Then we will also do that operation when it’s in the storage location as well prior to stacking,” Mjoen noted. “I think our human factors team has some reach assessments that they want to take a look at, so we’ll be taking advantage of that [pre-stacking] opportunity to do that.”

The pieces of the work access platforms for the inside the LVSA will also be fed through the access doors and assembled inside. “That platform set gives them a surface to stand on and be able to adequately reach the components inside the LVSA, reaching up to that equipment shelf of ICPS and around the nozzle for all of that work,” Mjoen noted.

Except for the Core Stage, all the other elements of the Orion spacecraft and the launch vehicle for Artemis 1 are now arrayed at facilities at Kennedy and Cape Canaveral; the Core Stage schedule is expected to become clearer following the hot-fire test of the Green Run campaign in progress at Stennis. Pegasus stopped at the Michoud Assembly Facility in New Orleans to pick up some additional Ground Support Equipment for future shipping and handling of the Core Stage.

A lift spider that will be used to help rotate the Core Stage from horizontal to vertical during stacking operations will stay at KSC while two self-propelled modular transporters were loaded back on Pegasus. The barge will eventually return to Stennis when the Core is ready for its delivery to the launch site and a full set of self-propelled modular transporters will be needed to load the stage on the barge

In addition to the LVSA, Mjoen is monitoring the status of the other two pieces of the SLS Integrated Spacecraft and Payload Element, the ICPS and the Orion Stage Adapter. The ICPS is a modified United Launch Alliance (ULA) Delta Cryogenic Second Stage that serves as the “in-space” stage for the SLS Block 1 vehicle. The Orion Stage Adaptor is the spacecraft to launch vehicle adapter for Orion launches.

Both are in the later stages of offline processing before they are ready to be assembled on the Artemis 1 vehicle.

The ICPS for this flight is currently in the Delta Operations Center (DOC) at nearby Cape Canaveral. After storage in the Space Station Processing Facility at KSC for two years, it was moved to the DOC for maintenance work before it enters the launch processing flow.

“At the DOC, they are doing preps for final turnover to EGS necessary ahead of our ground processing,” Mjoen said. “They are performing some avionics work, component swap outs, and inspections. The Inertial Navigation Control Assembly and main vehicle batteries that we will be using in support of testing through Wet Dress Rehearsal as an example are being installed.”