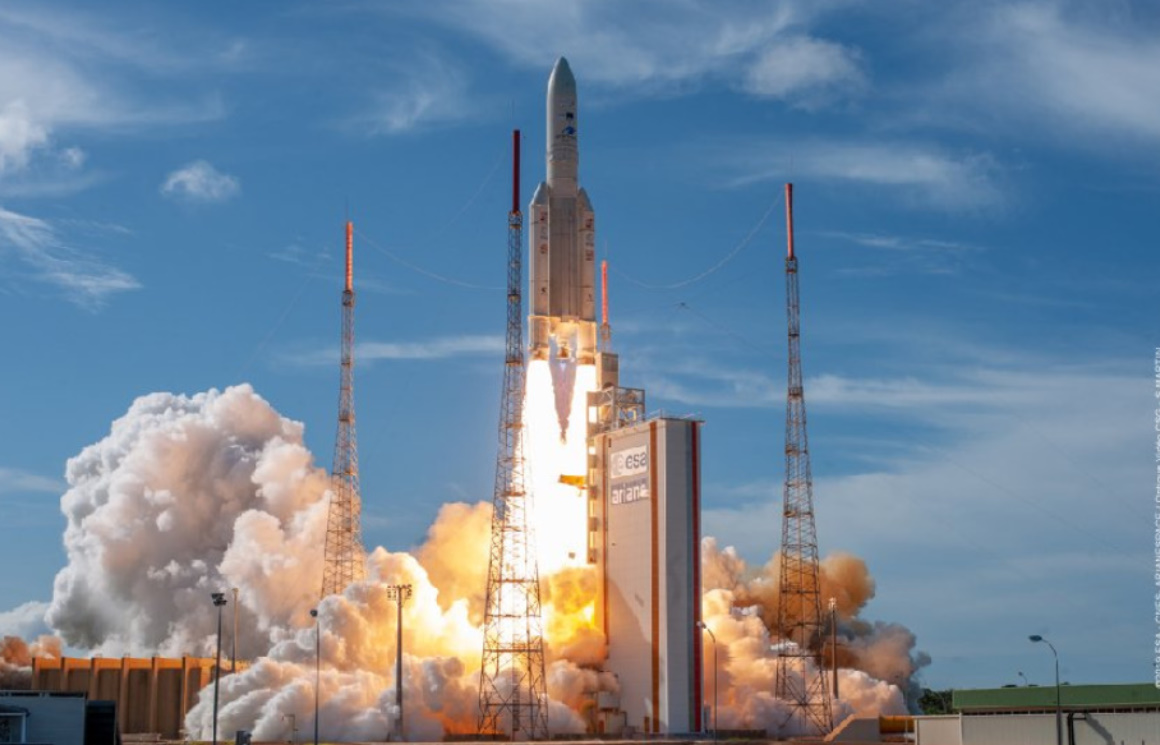 An Ariane 5 rocket, operated by European Launch Service provider Arianespace, will make a second attempt to launch on its 109th scheduled flight, designated VA253, on Saturday.

The heavy lift rocket was scheduled to launch from pad Ensemble de Lancement Ariane 3 (ELA-3) at Europe’s spaceport in Kourou, French Guiana, on 31 July 2020. However, a hold was called, under two minutes to launch. Efforts to return to the countdown within the launch window were unsuccessful, resulting in a scrub and a rollback for a replacement of a sensor inside the liquid hydrogen tank in the launcher’s main cryogenic stage.

The Ariane 5 rocket for this mission was integrated with its payloads earlier in July and rolled out to the pad, ELA-3, on Thursday, 30 July.

Riding in the “lower passenger” position inside the SYLDA (Système de Lancement Double Ariane — “Ariane Double-Launch System”) is BSAT-4b, a broadcasting satellite built by Space Systems/Loral (SSL), a subsidiary of Maxar Technologies.  The satellite is based on the SSL-1300 spacecraft bus.

BSAT-4b is owned and operated by Broadcasting Satellite System Corporation (BSAT), which provides communication and broadcasting satellite services for Japan.

The spacecraft will serve as a backup to BSAT-4a, which was launched in September 2017 aboard an earlier Ariane 5 mission.  BSAT-4b is identical to -4a.

The 3,520 kg satellite uses 24 Ku-Band (12-18 GHz) transponders and will be capable of broadcasting 4K/8K ultra-high definition media direct-to-home in the area it provides service for.

The spacecraft will be located in geostationary orbit at 110 degrees East.

It will be the final payload to separate from the Ariane 5’s upper stage at T+47 minutes 39 seconds.

Riding above BSAT-4b, in the “upper passenger” position on top of the SYLDA, are two more spacecraft: Intelsat’s Galaxy 30 and Northrop Grumman’s Mission Extension Vehicle 2, via their wholly-owned subsidiary SpaceLogistics LLC.

The launch of Galaxy 30 will mark the beginning of the replacement program for Intelsat’s current fleet of 13 Galaxy satellites.

The spacecraft will be positioned in a Geostationary Orbit at 125 degrees West, providing Ultra High Definition (UHD) and Over The Top (OTT) media services as well as other communications options to the continental U.S., Alaska, and the Caribbean Islands. 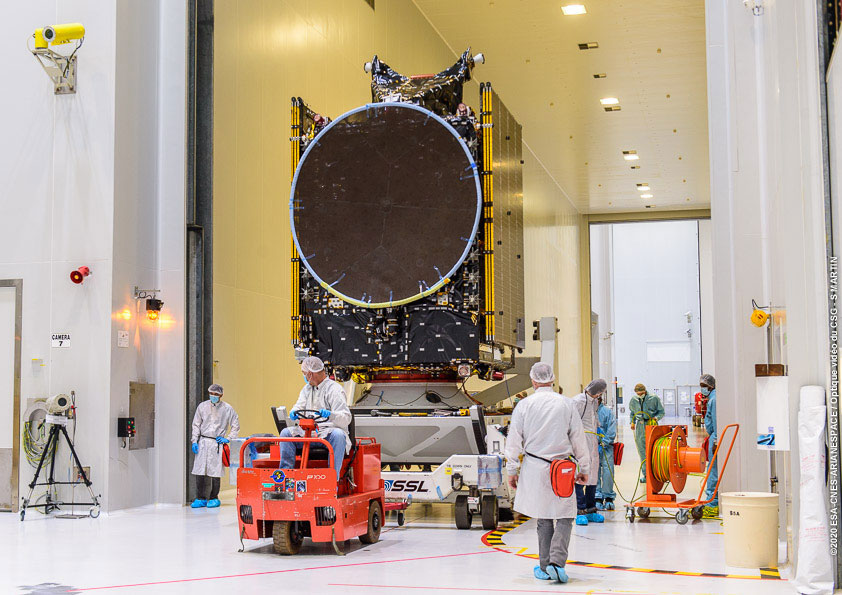 BSAT-4b being transferred to the S5A Fueling and Integration building at Kourou. (Credit: ArianeGroup)

Galaxy 30 will actually ride on top of the Mission Extension Vehicle 2 (MEV-2) spacecraft. MEV-2 is part of Northrop Grumman’s Mission Extension Vehicle fleet, which are capable of rendezvousing and docking to older satellites in orbit and providing them with extra fuel for an extended operational life instead of decommissioning an otherwise perfectly functioning satellite.

MEV-2 follows in the footsteps of MEV-1, which launched aboard a Russian Proton-M rocket in September 2019 and docked to the Intelsat 901 satellite three months later in Geostationary orbit — the first-ever docking in that orbit.

MEV-1’s arrival at Intelsat 901 allowed the satellite (which would have needed to be decommissioned, owing to lack of fuel) to continue operating in active service for at least five years per the contract.

MEV-2 will now service another Intelsat spacecraft, Intelsat 10-02 which launched aboard a Proton-M rocket in 2004 and is currently located in Geostationary Orbit at 1.0 degrees West.

NASASpaceflight interviewed Vice President for Business Development Joe Anderson of SpaceLogistics (the wholely-owned subsidiary of Northrop Grumman that operates the MEV vehicles) about the MEV-2 mission.

He noted two major differences between MEV-2’s mission and the earlier MEV-1, the first of which being that Intelsat will keep the 10-02 satellite in Geostationary Orbit at 35,786 km instead of moving it up 300 km higher into what is known as the Geostationary Orbit graveyard.

This major difference is due to the success of MEV-1 and Intelsat 901, which had been decommissioned and moved into a Geostationary graveyard so that MEV-1 could rendezvous with it there.

Ahead of Intelsat’s 151st launch this evening, our experts talk about the significance behind #Galaxy30 and what it means to our customers.

Every element of the MEV-1 mission went according to plan and proved out all of the rendezvous and docking systems.

Intelsat reviewed the data, and was so pleased with the process they agreed to allow MEV-2 to approach and dock to Intelsat 10-02 in Geostationary Orbit while the satellite is still operating and performing its telecommunication duties to customers.

This allows for a more simplified process, noted Mr. Anderson. “Number one: we’re doing this directly in Geostationary Orbit, so it actually simplifies the process considerably, especially from the telemetry and commanding perspective.”

The second change is directly related.  “We’re not drifting relative to the Earth,” noted Mr. Anderson.  “We’re not drifting past other operational satellites, so we don’t have the coordination of our telemetry and commanding to avoid Radio Frequency interferences.  So that simplifies the operation considerably.”

After the Ariane 5 upper stage cuts off once reaching the desired 250 x 35,735 km Geostationary Transfer Orbit target, Galaxy 30 will be released from MEV-2 at T+27 minutes 47 seconds.

“The MEV was designed intentionally to be compatible with a stacked launch, with a dual launch,” related Mr. Anderson.  “We were originally, if you go back several years, designing them to stack two of them together.  But it’s just as compatible of being stacked with another spacecraft as well.  So we took the opportunity to combine our MEV launches with other [Geostationary Orbit] spacecraft that we were building and proposing at the same time as the MEVs came along.” 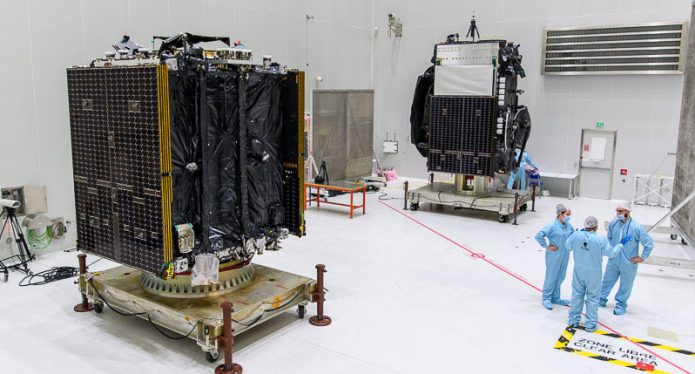 MEV-2 (Foreground) and Galaxy 30 (Background) at the Kourou S5 Processing facility ahead of Integration. (Credit ArianeGroup)

After a brief reorientation in orbit after Galaxy 30’s release, MEV-2 will then separate from the top of SYLDA at T+34 minutes 22 seconds.

“Once MEV-2 is separated from the upper stage of the launch vehicle, it does a few deployments of its own,” said Mr. Anderson.  “Some of the appendages and antennas and those sorts of things have to deploy before it begins doing its orbit raising.

“So the first stage of our orbit raising involves a couple of small hydrazine chemical propulsion thruster firings to begin the orbit-raising.  And then, after that, we will deploy the solar arrays.  Then we begin doing our electric propulsion orbit-raising which is the primary orbit-raising method.  That maneuver will basically involve firing the engine continuously for months to get up to Geostationary Orbit.

It will take MEV-2 about five months to reach Geostationary Orbit — about one more longer than MEV-1 because the Ariane 5 delivers the payload into a slightly lower Geostationary Transfer Orbit than MEV-1’s Proton launcher did in October 2019.

Once MEV-2’s five year contracted mission with Intelsat 10-02 is complete, the spacecraft will be available for contract by other satellite operators in order to extend the lives of their would-be-decommissioned satellites.