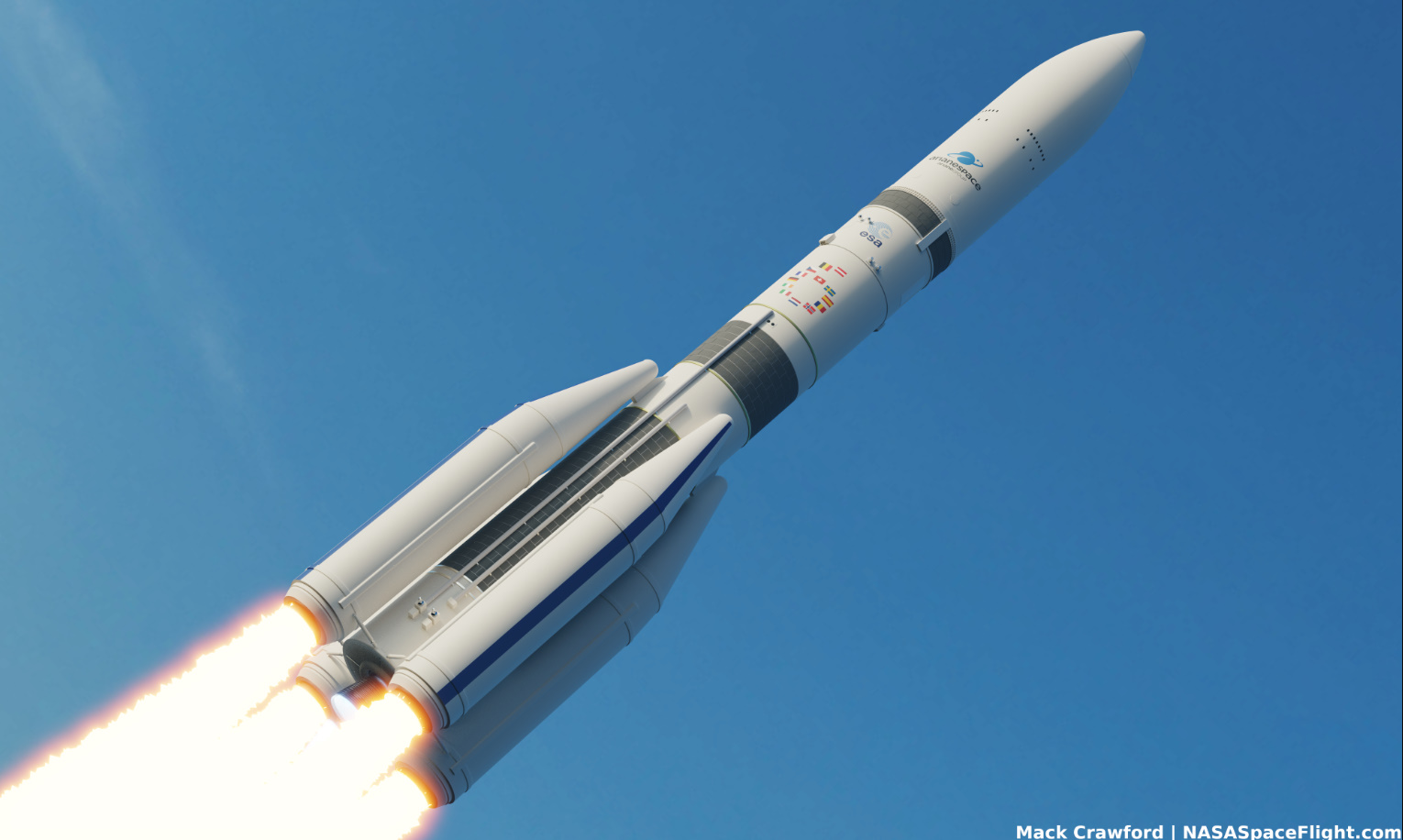 The European Space Agency (ESA) has delayed the maiden launch of their upcoming heavy-medium rocket: the Ariane 6. Arianespace – the prime contractor for Ariane 6 – and ESA now expect it to launch NET (no earlier than) the second half of 2021, with at least six months of delay.

Ariane 6 is a medium-heavy launch vehicle developed and manufactured by Arianespace, working under European Space Agency. Its first stage is powered by Vulcain 2.1 hydrolox engine.

The Vulcain 2.1 engine is an updated version of Vulcain 2 from Ariane 5 but with lower manufacturing cost. It is produced by Snecma Moteurs of France, Avio of Italy and GKN of Sweden.

Available in two configurations: A62 with two and A64 with four P120C solid rocket motors. It is developed by an Italian contractor Avio and a French contractor ArianeGroup through a joint venture Europropulsion under ESA contract for use on Vega C and Ariane 6. Derived from the first stage of Vega rocket P80, it’ll replace the P80 to become the world’s largest and most powerful one-piece solid-fuel rocket engine. 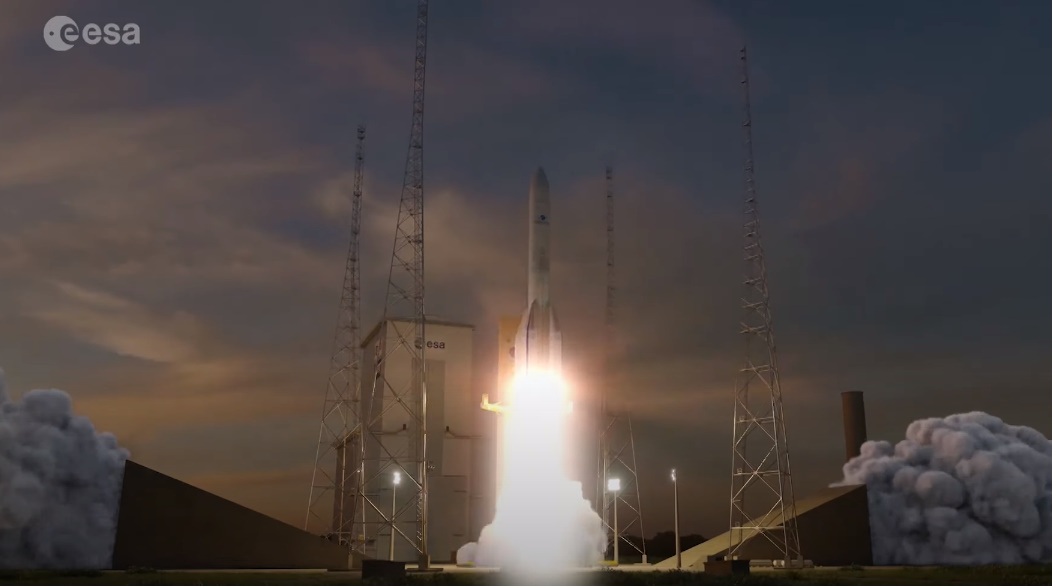 Ariane 6 is slated to replace Ariane 5. Its simpler design allows twice the number of launches as Ariane 5 with half the cost, expected around €75 million, and €115 million per launch for A62 and A64 launch configuration respectively.

Over 63 meters tall and 5.4 meters wide, it can launch 5 metric tonnes to Geosynchronous Orbit (GEO) and up to 21.65 tonnes to Low Earth Orbit (LEO). It will launch from Europe’s Spaceport: the Guiana Space Center in Kourou, French Guiana.

Ariane 6 is under development in a public-private partnership with the majority of the funding coming from various ESA government sources amounting to €2.815 billion, while €400 million is reported to be “industry’s share.”

ESA confirmed the delay to its new launch vehicle’s maiden flight on Friday, citing the impact of the COVID pandemic as one of the reasons.

“While we know that the maiden flight will not take place before the second semester of 2021, we cannot, at this moment, precisely quantify the delay, and cannot provide an exact launch date,” said Daniel Neuenschwander, ESA’s Director of Space Transportation, in response to questions from NASASpaceFlight.com.

“The COVID 19 pandemic is affecting space activities worldwide and implementation of ESA programs and activities, including Space Transportation.”

Europe’s space sector has been hit hard by the COVID pandemic. Guiana Space Center in Kourou, French Guiana, the launch site of ESA rockets such as Ariane 5 and Vega suspended operations in March due to Coronavirus outbreak in the nearby city, reopening two months later in May 2020. Due to this, many launches were postponed, including Vega’s return to flight after its launch failure.

According to Neuenschwander, work on the Ariane 6 construction site, where Ariane 6 is assembled and configured to launch, is being done at a reduced rate with a downsized workforce. 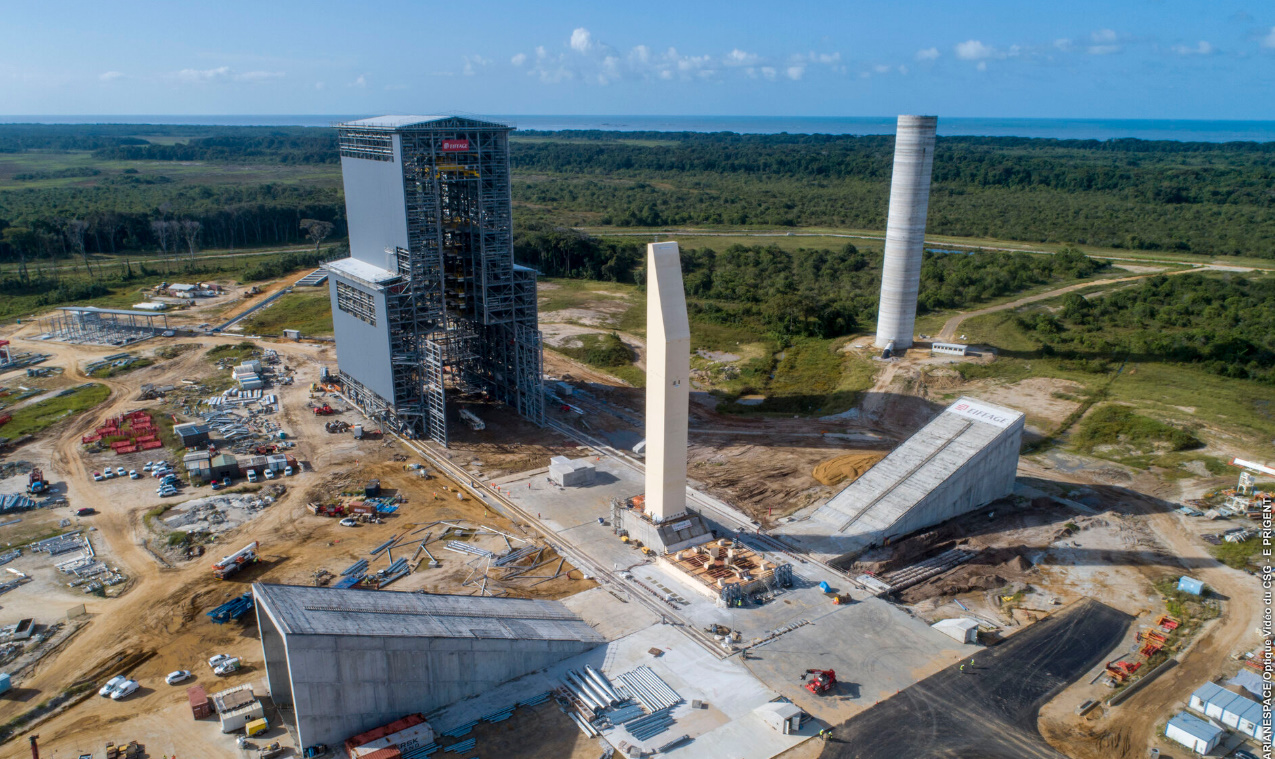 The industrial sites involved in the development and manufacturing of the Ariane 6 launcher system are also operating at low productivity levels.

This led to the postponement of one of the most crucial tests to certify it for flight: the static fire of P120C solid rocket motor, one of the four solid rocket motors for Ariane 6. This in turn caused the delay of the combined tests, where the launch vehicle is assembled and the launch base and the vehicle are mated and tested together.

“For Ariane 6, the third static fire test of the P120C booster (for Ariane 6 qualification), which was initially planned just before the start of the COVID-19 confinement, had to be delayed,” added Mr. Neuenschwander.

“Likewise, works on the Ariane 6 construction site at Europe’s Spaceport have had to progress with a downsizing and therefore at a reduced progress rate. Finally, there have also been variations in the productivity of the industrial sites involved in the Ariane 6 launcher system development and manufacturing as a consequence of the pandemic.”

While ESA still cannot precisely anticipate the amount of delay the pandemic has caused, they are working closely with their industry partners, including Arianespace and French Space Agency CNES to stabilize as they address the preliminary impacts of COVID and prepare to return to a stable level of activity.

“ESA is working intensely, and very closely with all actors involved, industry and CNES, to stabilize and consolidate the planning,” Mr. Neuenschwander noted. “Today we are daily addressing the preliminary impacts and preparing to return to a stable level of activity. We will fully consolidate the planning and assess the full impact of COVID-19 on Ariane 6 once we have more clarity on how the European economy will be able to function in the coming months.”

The post ESA delays Ariane 6 launch to the second half of 2021 appeared first on NASASpaceFlight.com.