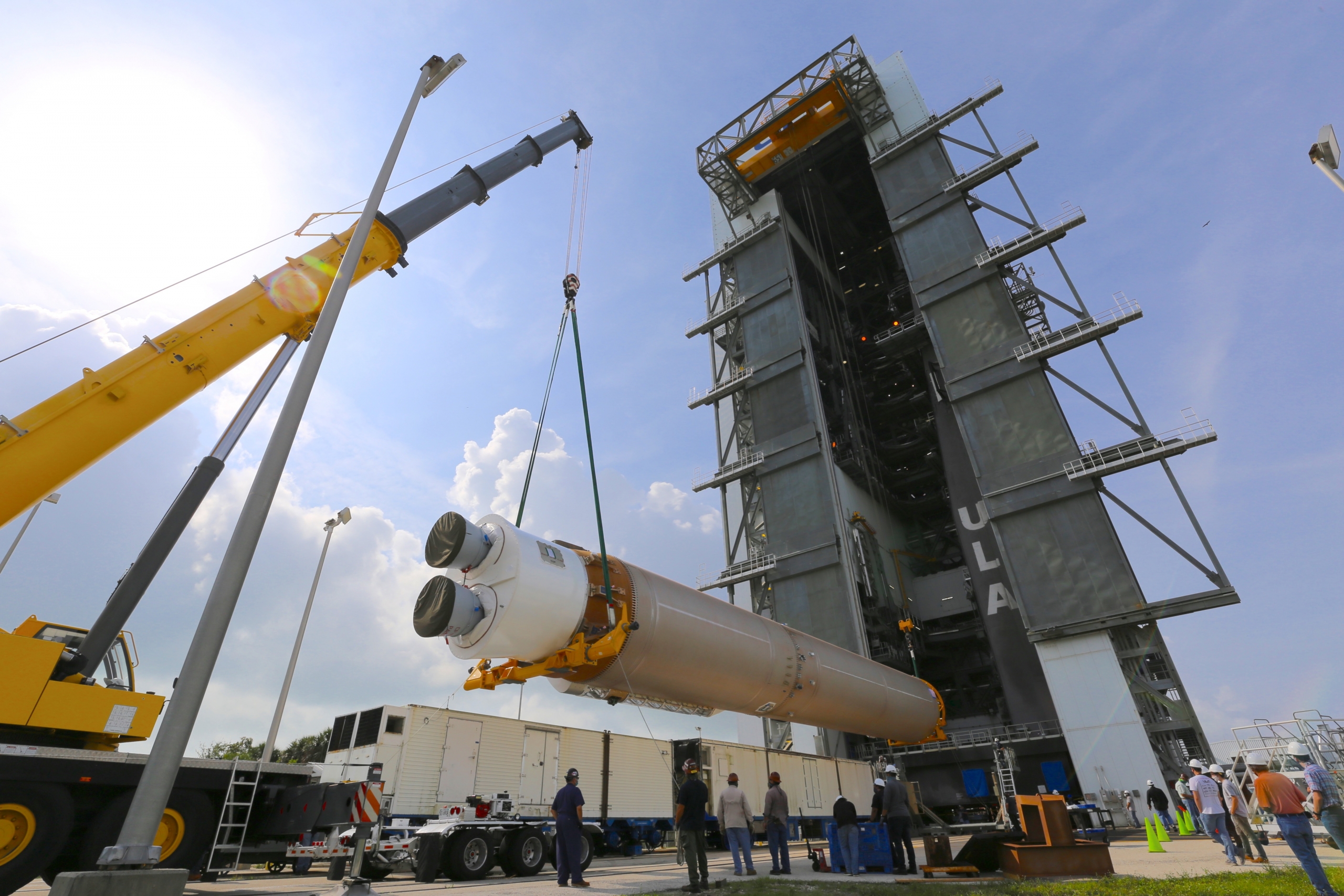 The next Atlas V to launch a mission to Mars is at the launch site, as United Launch Alliance (ULA) moved through “Launch Vehicle on Stand (LVOS)” operations for NASA’s Mars 2020 mission. The preparations are being conducted at Space Launch Complex-41 or SLC-41 at Cape Canaveral Air Force Station (CCAFS).

The pad flow has begun not long after the rocket had arrived in Florida.

The booster arrived into the Cape from Decatur, Alabama on May 18 on an Antonov-124, flown by Volga-Dnepr Airlines.

Usually, ULA’s transport ship, called the R/S RocketShip – launched in 1999 and was previously known as the M/V Delta Mariner – delivers the booster to the Cape. However, since the ship was in the Pacific Ocean at the time, the chartered aircraft was utilized. 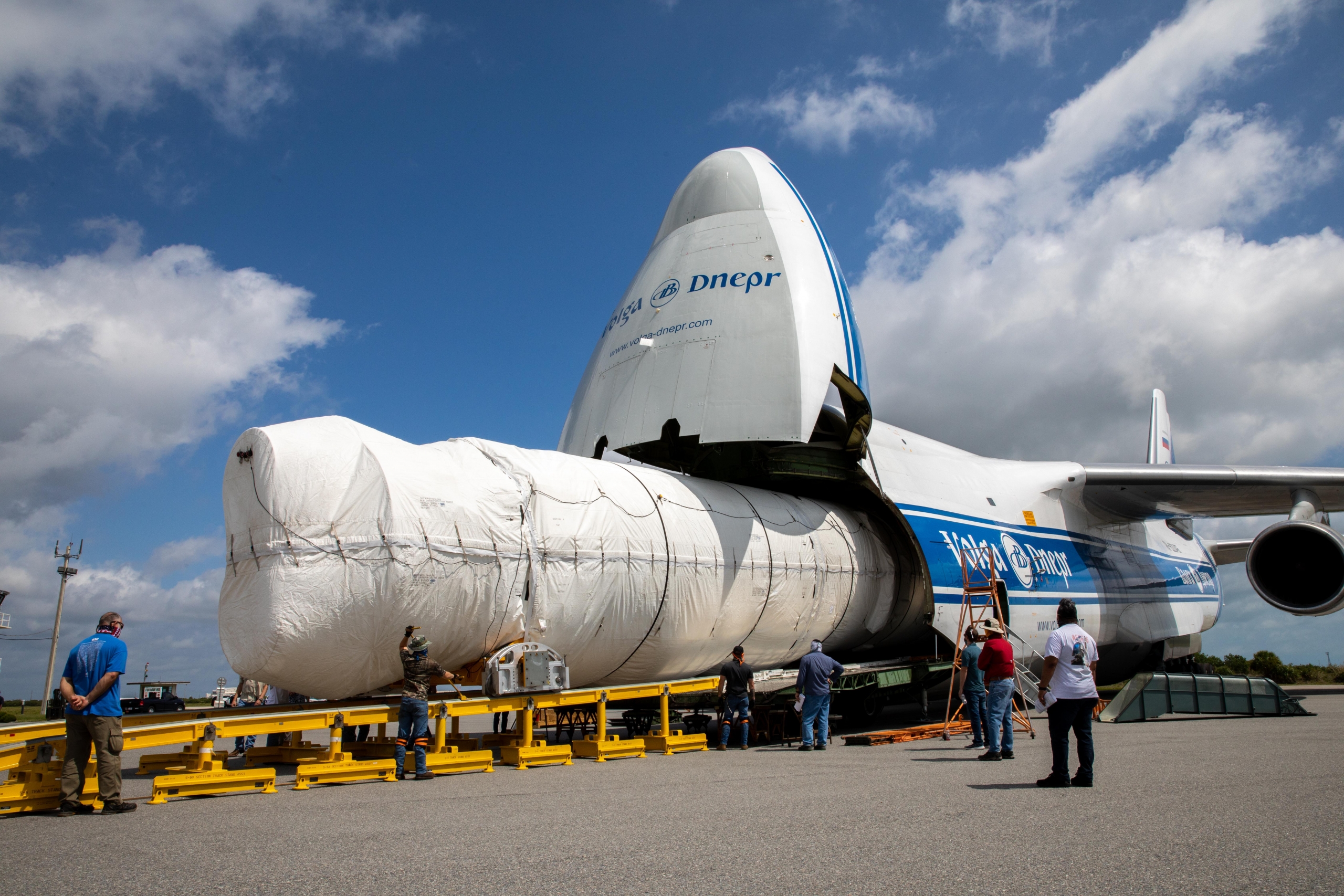 The Atlas V core stage is offloaded from the Antonov-124 at CCAFS. Photo Credit: NASA.

Once the Atlas V booster was offloaded from the Antonov-124, it was moved from the CCAFS Skid Strip to the Atlas Spaceflight Operations Center. It was stored there until the booster was needed for LVOS operations at SLC-41.

After the booster was in position next to the VIF, a mobile crane raised the booster off of the trailer. Then, an overhead crane atop the VIF and the ground handling fixture slowly raised the 107-foot booster to the vertical position.

The crane then assisted the Atlas V booster further into the VIF. Soon after the booster was lowered onto its place on the Mobile Launch Platform (MLP). ULA technicians then secured the booster to the MLP itself.

Earlier in May, the MLP and SLC-41 nominally launched the USSF-7 mission for the United States Space Force. The mission carried the top-secret Boeing X-37B spaceplane on an Atlas V 501.

SLC-41 previously launched the Titan III and Titan IV rockets, with the first launch being in 1965. The complex has been exclusively used for Atlas V launches since the Hot Bird 6 launch in 2002, which was the inaugural Atlas V launch.

The introduction of the Atlas V in 2002 marked a dramatic shift in the Atlas rocket family. Unlike the previous Atlas III variant, the Atlas V does not use pressure stabilized tanks. Instead, the Atlas has as what ULA calls a “common-core” booster. 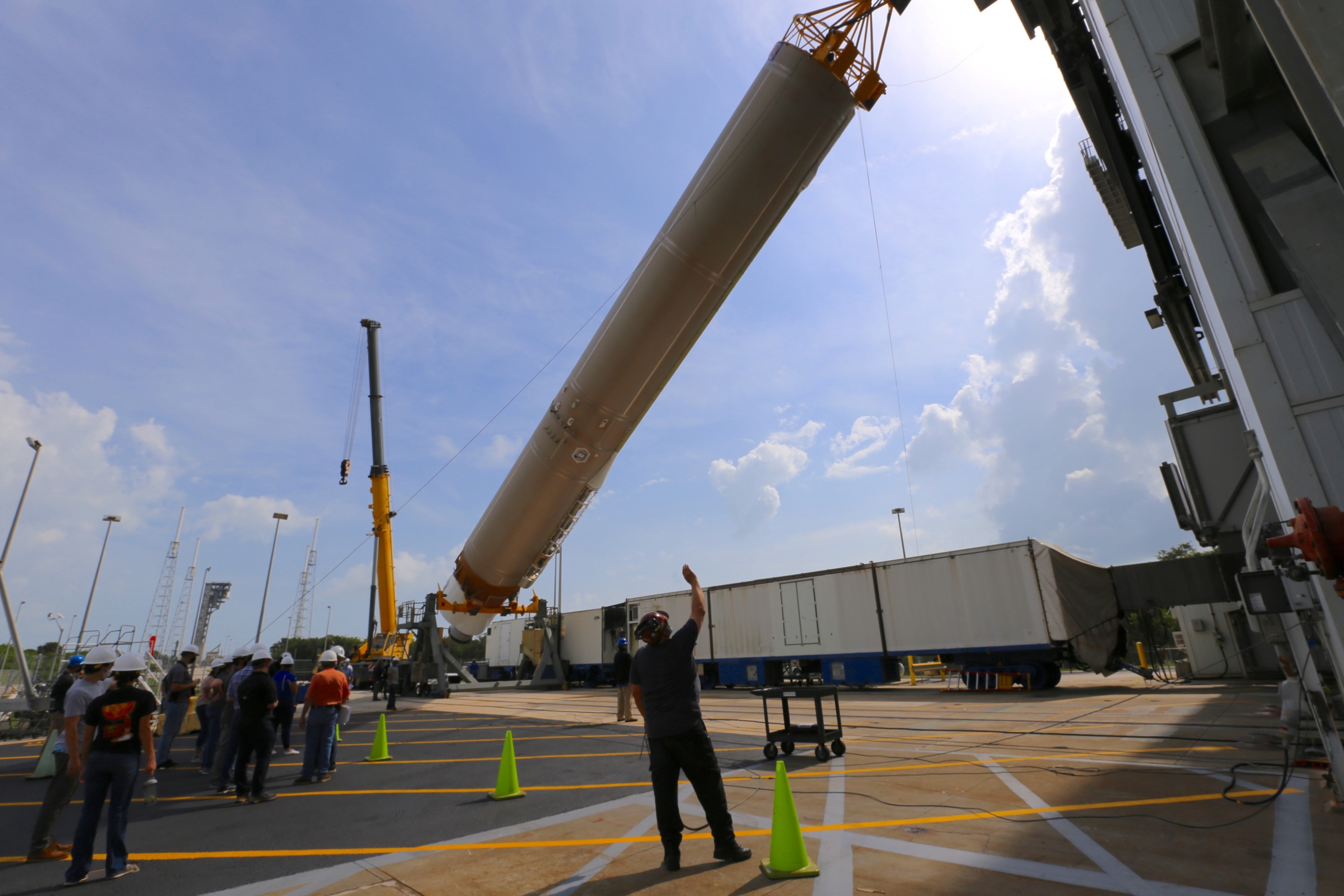 In 2021, another evolution in ULA’s rocket family will be online, as the Vulcan rocket conducts its inaugural launch from SLC-41.

The Atlas V for the Mars 2020 mission will fly in the 541 configuration, which means that the rocket will sport a five meter fairing, four Aerojet Rocketdyne AJ-60 solid rocket motors, and one Aerojet Rocketdyne RL-10 engine on the Centaur III upper stage. The serial number for this Atlas V rocket is AV-088.

The Centaur upper stage has been used since its first launch on an Atlas rocket in May 1962. However, like the Atlas rocket, the Centaur has undergone numerous modifications. The RL-10 engine runs on Liquid Hydrogen and Liquid Oxygen. Centaur will continue to fly even after Atlas has been retired in the form of the improved Centaur V on the Vulcan rocket.

The Aerojet Rocketdyne AJ-60s will eventually be replaced by GEM-63 solid rocket motors which are being built by Northrop Grumman.

The Atlas V configuration for Mars 2020 is the same that was used for the Mars Science Laboratory (MSL/Curiosity) mission, which landed the rover at Gale Crater in 2012.  The design for the Perseverance rover is based on the design that was used for Curiosity.

However, unlike the Curiosity rover, Perseverance will also carry an experimental helicopter, called Ingenuity.

ULA and its heritage companies have launched every single United States mission to Mars. The first two American missions to Mars, Viking 1 and 2 also launched from SLC-41.

The launch of Viking 2 from SLC-41. Photo Credit: NASA.

Other past Mars missions launched by ULA include the Mars Exploration Rovers Spirit and Opportunity, and the most recent NASA mission to Mars, Insight.

The rover has been integrated with Ingenuity and the Descent and Entry Vehicle assemblies. 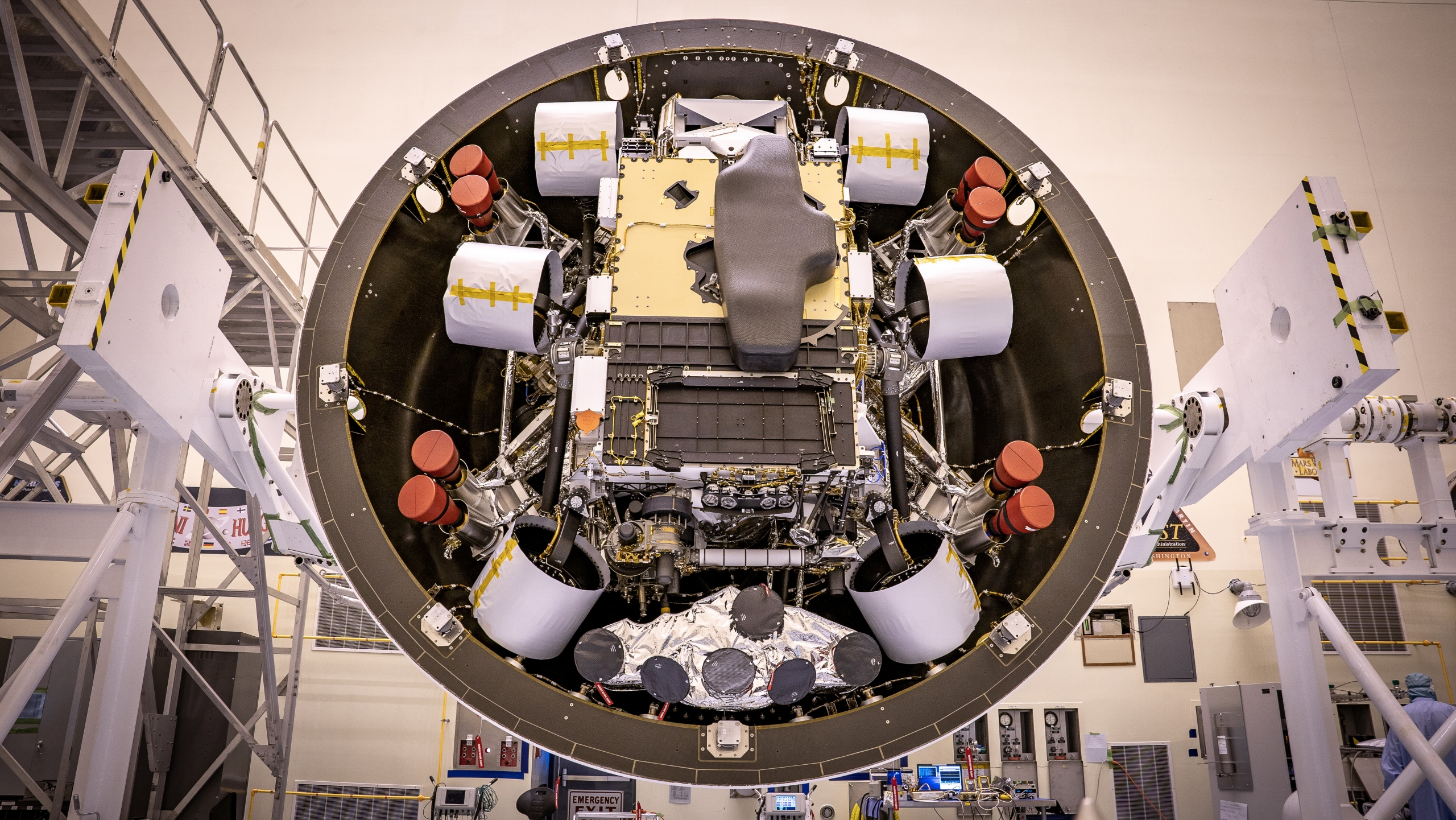 In the coming weeks, more preparations will be carried out on the Atlas V inside the VIF. The Centaur III upper stage will be rolled over to the VIF at SLC-41. The same goes for the four Aerojet Rocketdyne AJ-60s, which will be attached to the first stage booster.

The encapsulated payload will arrive at the VIF at SLC-41 after the boosters and the Centaur III is integrated into the Atlas V rocket.

The pre-launch schedule has been on a critical path, given the COVID-19 situation. The Mars 2020 mission has to make the July 17 to Aug 11 launch window for the mission to reach Mars in Feb 2021.

If all goes to plan, the landing site for the Perseverance rover is Jezero Crater.

The post NASA, ULA Begin the Final Push for the Launch of Perseverance to Mars appeared first on NASASpaceFlight.com.