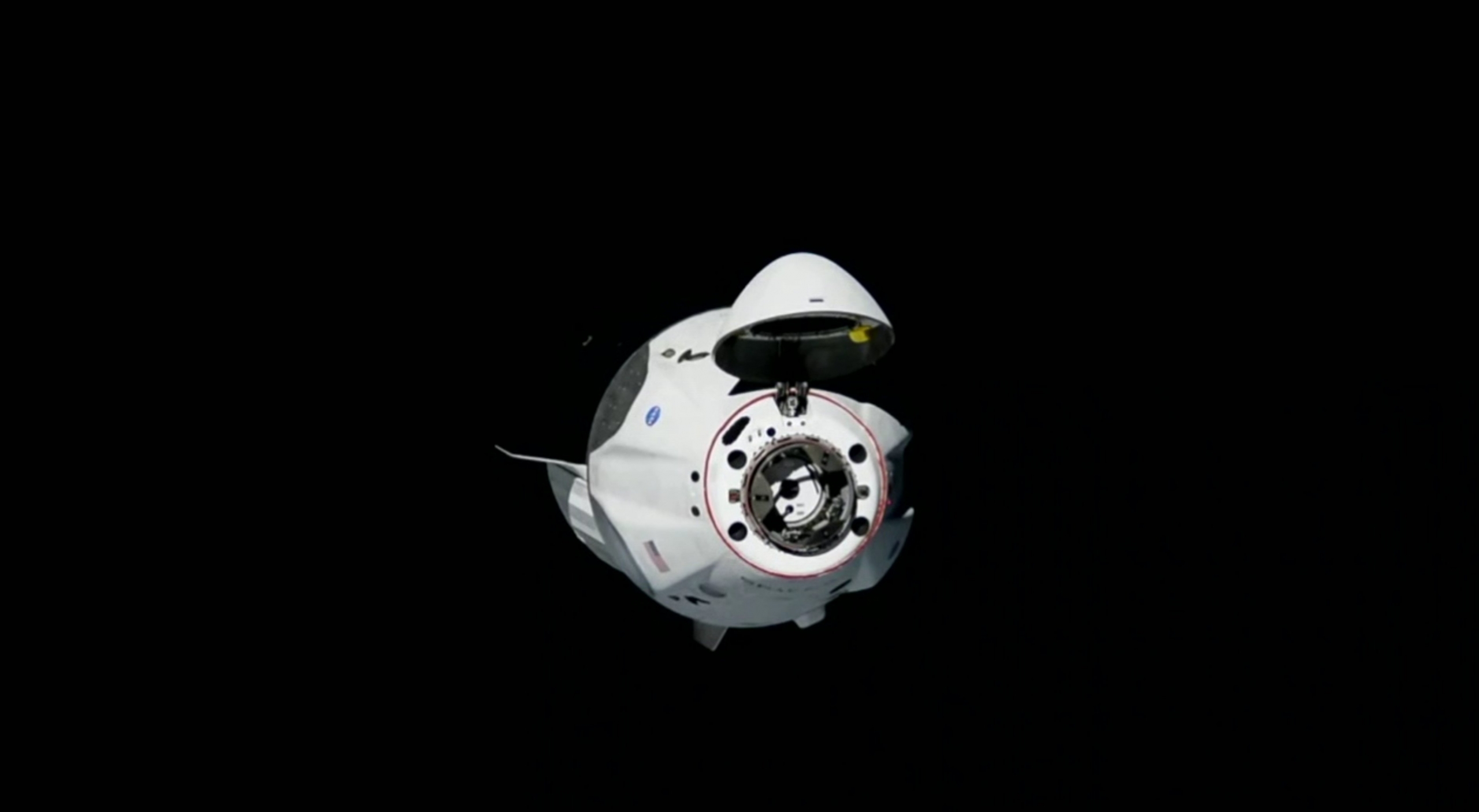 Before the Demo-2 mission, only one American crew vehicle had ever carried astronauts to the International Space Station, the Space Shuttle. On Sunday, SpaceX’s Crew Dragon became the second.

Dragon Endeavour has completed the first half of her round trip mission to the space station. Spacecraft Commander Doug Hurley and Joint Operations Commander Bob Behnken have “Captured the Flag” as the first crew to reach the ISS from the United States since the last Space Shuttle mission in 2011.

Endeavour lifted off on a Falcon 9 rocket Saturday, leaving LC-39A at the Kennedy Space Center in Florida at 3:22 PM EDT (19:22 UTC). After a flawless ride uphill, Endeavour separated from Falcon 9’s second stage and opened its nosecone. This exposed the spacecraft’s docking port as well as an array of Draco maneuvering thrusters, and began the nineteen hours of tests and maneuvers to rendezvous with the ISS. 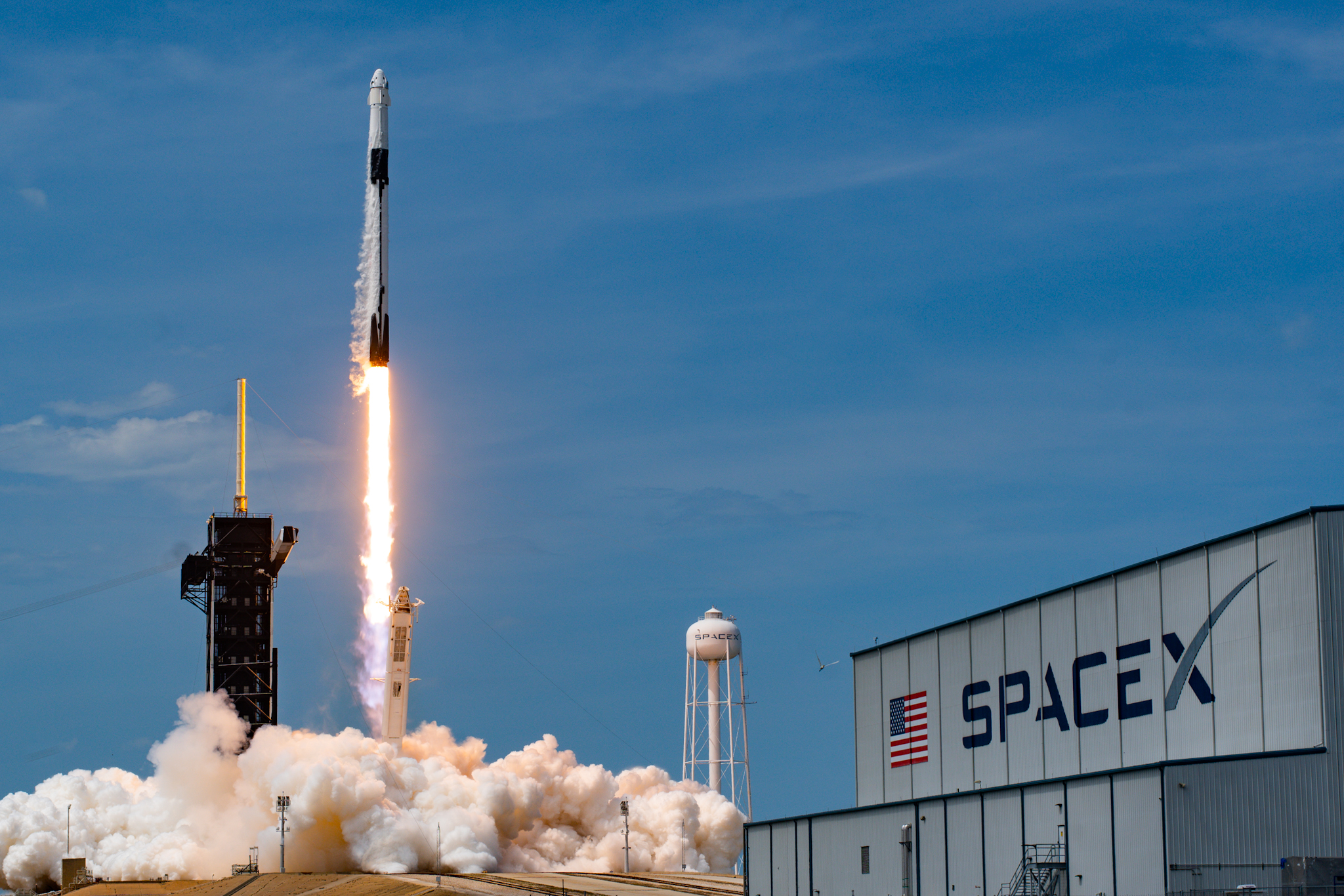 Shortly after launch, Endeavour completed a Phase Burn, the first of five burns prior to final approach to the station. These burns are completed using Dragon’s Draco thrusters, SpaceX’s hypergolic reaction control thrusters.

The crew of Endeavour then took manual control of the spacecraft, marking the first time Crew Dragon has been manually controlled. This was the first of two manual flight tests for Demo-2, testing the “far-field” maneuvering controls by piloting the spacecraft’s attitude.

Manually controlling the spacecraft is one of the test objectives that could only be accomplished on a crewed mission. Other systems being tested on Demo-2 are the life support systems and touch displays. After the test, the crew returned Endeavour to autonomous flight. 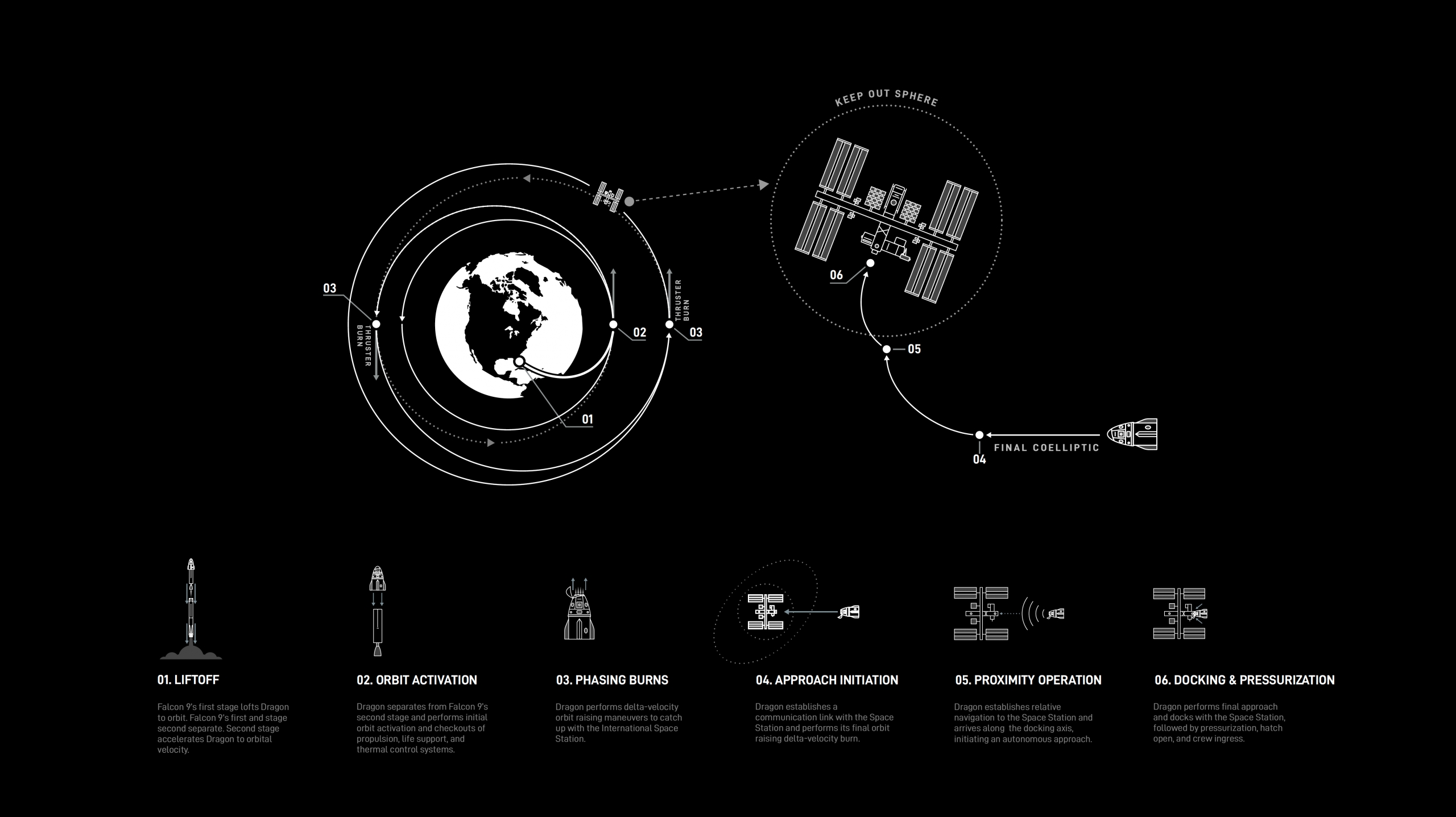 The main phases of flight from launch to docking – via SpaceX

During the sleep period, Endeavour autonomously completed the fourth burn, a transfer burn at 4:27 AM EDT (08:27 UTC) in order to raise its apogee even closer to the ISS, just 2.5 kilometers below the station’s altitude. The crew woke up around 5:00 AM EDT (09:00 UTC), which was accompanied by another NASA human spaceflight tradition. Ground controllers played Black Sabbath’s “Planet Caravan” as the crew’s wake up song.

The fifth, “Final Coelleptic” burn occurred at 5:14 AM EDT (09:14 UTC), again circularizing Endeavour’s orbit. This was the final burn prior to approach initiation. The crew donned their spacesuits, and began preparations for docking.

After reaching waypoint one, 220 meters in front of the station, at 9:22 AM EDT (13:22 UTC), the crew conducted the second manual flight test. This time, the crew tested the controls for “near-field” maneuvering.

Lined up with the IDA at Waypoint 1. More translations and then prepared to go to 20 meters at Waypoint 2. pic.twitter.com/AqAuRSL2T7

Once Endeavour returned to autonomous control, Endeavour continued to waypoint two at 10:10 AM EDT (14:10 UTC). This puts the spacecraft just 20 meters from the IDA-2 docking adapter on the PMA-2 port of the ISS’s Harmony module. This is the same docking port that Crew Dragon docked to on the uncrewed Demo-1 mission.

Following pressure and leak checks, Behnken and Hurley are able to remove their spacesuits and prepare to open Dragon Endeavour’s hatch. Once on the station, the Demo-2 crew will work as members of Expedition 63, conducting research and maintenance tasks on board. Testing of Crew Dragon while it is docked to the ISS will be the responsibility of Joint Operations Commander Bob Behnken.

DOCKING CONFIRMED! Two American astronauts have arrived at the ISS on an American spacecraft from American soil for the first time since STS-135 with Shuttle Atlantis.

The Crew Dragon spacecraft will remain docked at the ISS until approximately one month prior to the Crew-1 mission, SpaceX’s first operational crew rotation flight. The capsule that will carry NASA astronauts Michael Hopkins, Victor Glover, and Shannon Walker, as well as JAXA astronaut Soichi Neguchi, is progressing well at SpaceX’s Hawthorne, California factory. Based on hardware readiness for that launch, which is currently trending for a launch no earlier than August 30, Hurley and Behnken will be scheduled to return to Earth in time to allow SpaceX and NASA teams to inspect the vehicle and review data from Demo-2.

At the end of Demo-2, the crew will undock from the ISS, deorbit, and reenter Earth’s atmosphere. Endeavour will splash down in the Atlantic Ocean off the coast of Cape Canaveral, Florida, under four parachutes. Pending inspections of the vehicle after splashdown, SpaceX has discussed the possibility of reusing the capsule for future cargo missions. There are not currently plans to use reused capsules on crewed missions, but it is possible this could change as the Commercial Crew program moves forward.

On board Endeavour when she returns to Earth, in addition to Bob and Doug, will be the “Earthy” zero-g indicator brought to the station on Demo-1, and an American flag. The flag was left on the station by the crew of Space Shuttle Atlantis on STS-135, which included none other than Doug Hurley. The flag was to be “captured” by the next crew to launch to the station from the United States.

The flag is planned to return to space again when NASA pushes farther into space on board the Artemis II mission. Artemis II is planned to be the first crewed mission to cislunar space since Apollo 17 in 1972.

The post Dragon Endeavour Docks to the ISS, Bob and Doug Capture the Flag appeared first on NASASpaceFlight.com.