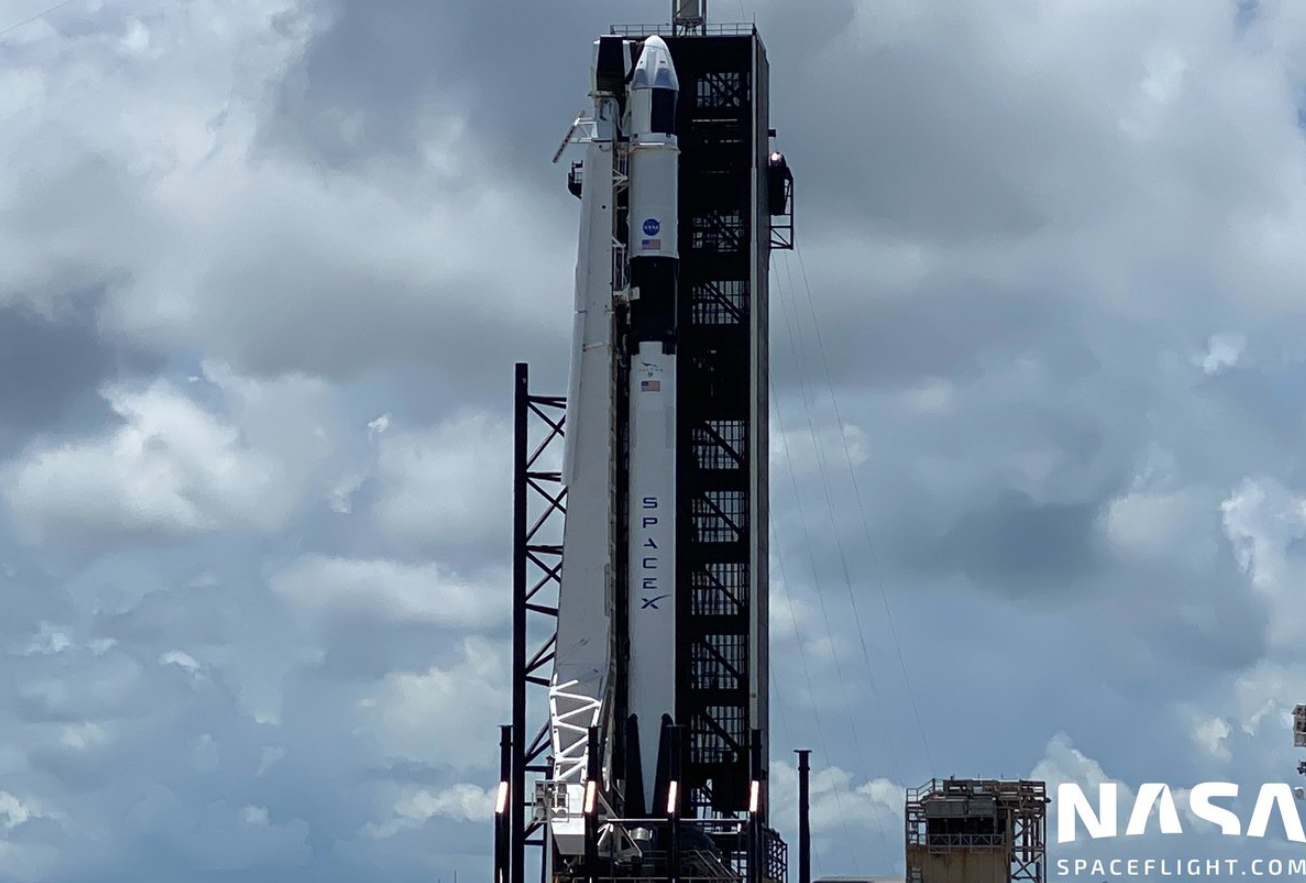 NASA and SpaceX are proceeding with a launch attempt on Saturday after a weather brief gave them a 50-50 chance of acceptable conditions. SpaceX’s Falcon 9 will attempt to launch at Bob Behnken and Doug Hurley on the Crew Dragon’s Demo-2 mission at 15:22:45pm EDT from Pad 39A at the Kennedy Space Center (KSC).

One small step.  After nine years, the baton is finally passed.  From Atlantis to Dragon, NASA and SpaceX are set to embark on a partnership that will not only return the ability to launch people into Earth orbit from the United States to access the International Space Station, but one that will also ignite the passions, imaginations, and careers of a generation.

It marks the final step in the long and winding road to return human launch capability to the United States, a cherished enterprise voluntarily given up in July 2011… with nothing but a promise that something would follow.

And follow it has with SpaceX and Crew Dragon.

What can’t be denied is that this mission means a great deal to a great many people. 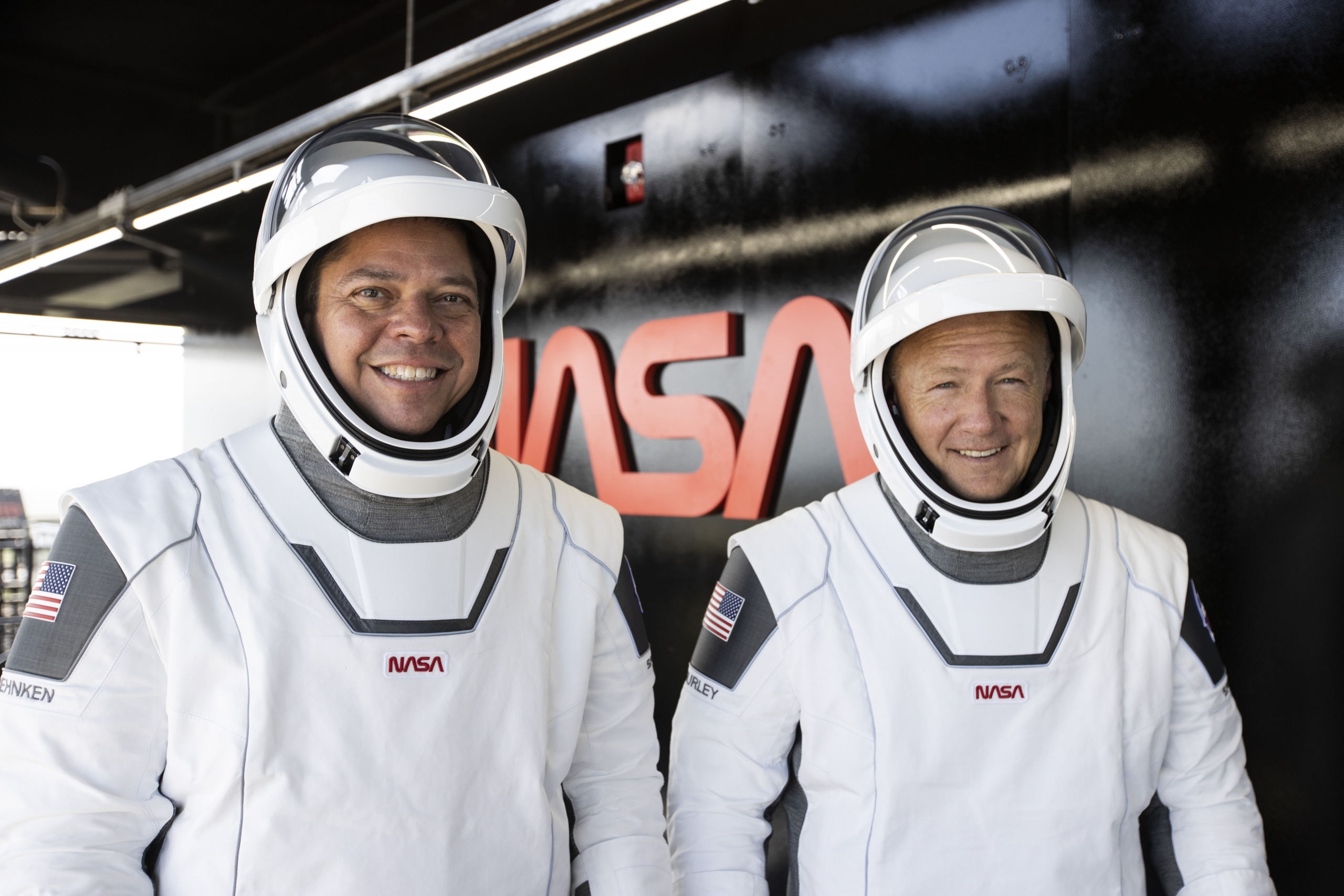 Bob Behnken and Doug Hurley (right) on the launch tower at pad 39A during a dry dress rehearsal for today’s mission. (Credit: SpaceX)

For some it’s that SpaceX won.  For others it’s the pride they feel again in the American space program.

Still others see it as the first step into the much larger endeavour of making humanity an interplanetary species.

But whatever its personal meaning to each of us, hopefully we all wish it to do the same as NASA did with Mercury, Apollo, and Shuttle before it: to inspire another generation to accomplish “the next impossible thing”.

The Launch:
Demo-2 will lift off from LC-39A at Florida’s Kennedy Space Center — the same pad where 13 Saturn V rockets and 82 Space Shuttles launched from.

The mission will return LC-39A to its rightful status as a human launch pad, for while it has hosted numerous satellite missions on commercial launches for SpaceX , it has and always shall be our trampoline to the stars.

But before Demo-2 can reach orbit, it must clear all of its final technical hurdles and the one uncontrollable thing: the weather.

As of publication, the official forecast stands at a 60% chance of favorable weather conditions at the time of liftoff.  But a large question remains for the abort weather in the Atlantic Ocean stretching from Florida up to the Canadian Maritime Provinces and then jumping across the ocean to the western coast of Ireland.

“So for me on the rescue side, I’ll be providing the weather support for the rescue stuff,” said Maj. Hromsco.  “We started even last Thursday kind of just getting a global big picture of like here’s where the major weather systems would be around the globe that could impact the rescue operations.

“And we’ve been issuing forecasts the last couple of days, doing it once a day, and then tomorrow there’ll be two times through the countdown where we provide an update to that [to the launch team].”

So far, the weather forecast has trended better, and if that continues and the weather is acceptable, today’s launch will be the 85th flight of the two-stage Falcon 9.

Falcon 9 boasts an excellent safety record, with its only in-flight loss of mission having occurred in 2015 on the CRS-7 cargo flight to the Station.  In the unlikely event of an anomaly during launch, Dragon’s launch escape system will carry the capsule and crew safely away from the rocket.

Unlike previous U.S. human spaceflights, Falcon 9 crews will be aboard their Dragon spacecraft during fueling.

The Launch Director will conduct a poll to commence fueling 45 minutes before launch (T-45 minutes).  Shortly afterwards, the crew access arm will move away from the vehicle and the launch escape system will be armed. 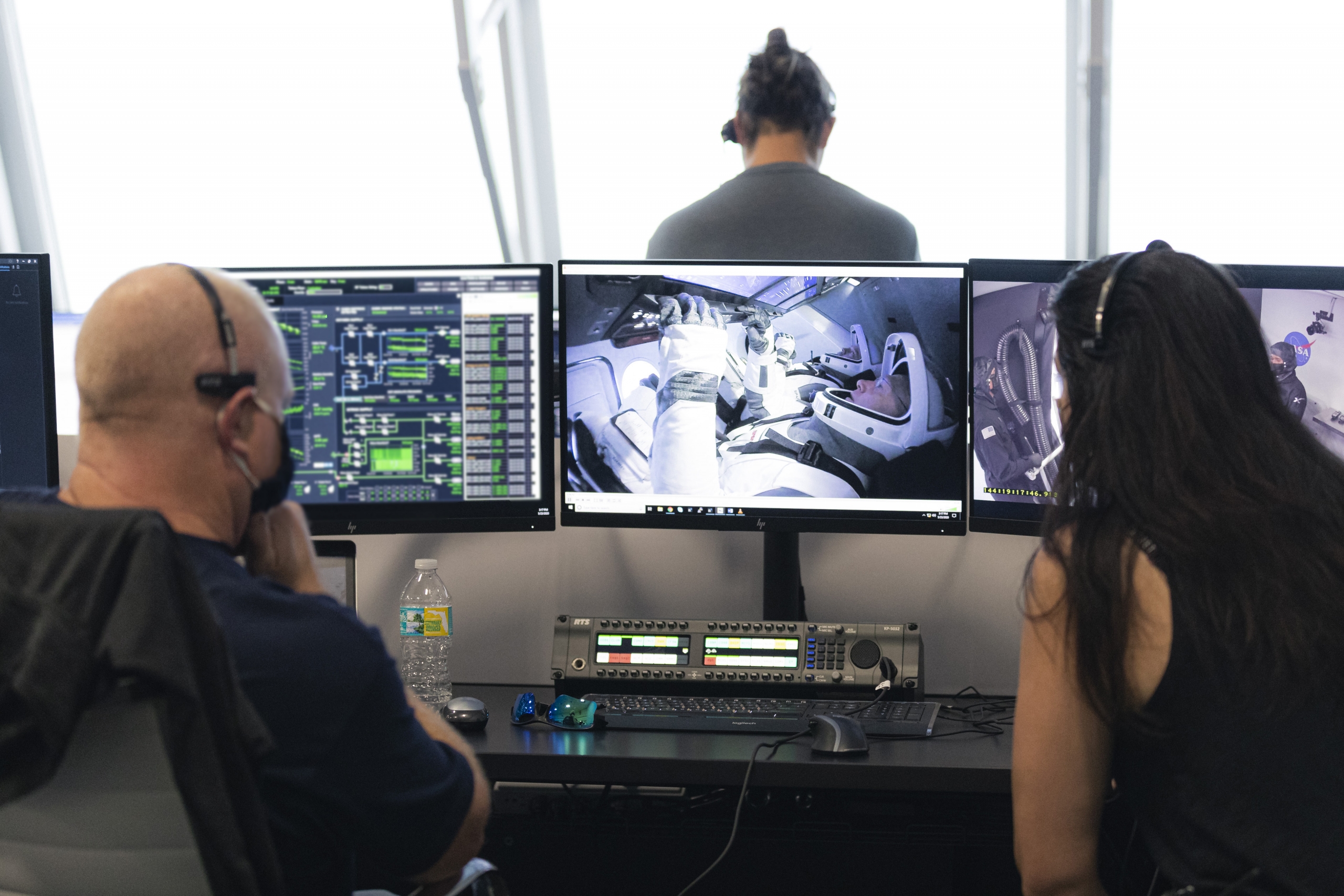 As they will today, SpaceX’s launch team keeps watch on Bob and Doug and vehicle systems during the dry dress rehearsal. (Credit: SpaceX)

The final “go” for launch will be given by the SpaceX Launch Director at T-45 seconds.

(To read about all the abort modes for Crew Dragon during launch, click here.)

After clearing the pad, Falcon 9 will pitch downrange, assuming a northeasterly trajectory aligned with the Space Station’s orbit.

The rocket will pass through Max-Q, the area of maximum dynamic pressure, 58 seconds into flight (T+58 seconds).  Here, the rocket experiences peak stress due to aerodynamic forces.

At T+2 minutes 33 seconds, the first stage will shut down and separate.  From there, the first and second stages will go their separate ways, with the first stage returning to Earth and the second continuing to orbit with Bob and Doug.

The second stage will ignite shortly after separation, beginning a 6 minute 03 second burn of its single Merlin Vacuum engine.

Meanwhile, the first stage will head for a landing on the Autonomous Spaceport Drone Ship Of Course I Still Love You for recovery and reuse.

After 8 minutes 47 seconds of powered flight, Falcon 9’s engine will shut down, having delivered Crew Dragon, Bob Behnken, and Doug Hurley into a 190 x 205 km orbit.

Dragon will remain attached to the second stage until T+12 minutes.  Shortly after separating, the spacecraft will open its nosecone and begin configuring for early on-orbit operations.

He later attended U.S. Air Force Test Pilot School at Edwards Air Force Base.  After graduation, he flew both the F-15 and F-16 to support the F-22 flight test program and has logged more than 1,500 flight hours in over 25 different aircrafts.

He joined NASA in July 2000 when he was selected as an Astronaut Candidate.  He then trained for 18 months and was assigned to support launch and landing operations at Kennedy in the Astronaut Office Shuttle Operation Branch.

Before going to space, Behnken served as an Aquanaut in September 2006 when he spent seven days in the underwater laboratory Aquarius off the coast of Florida during NASA Extreme Environment Mission Operations, NEEMO-11, mission. 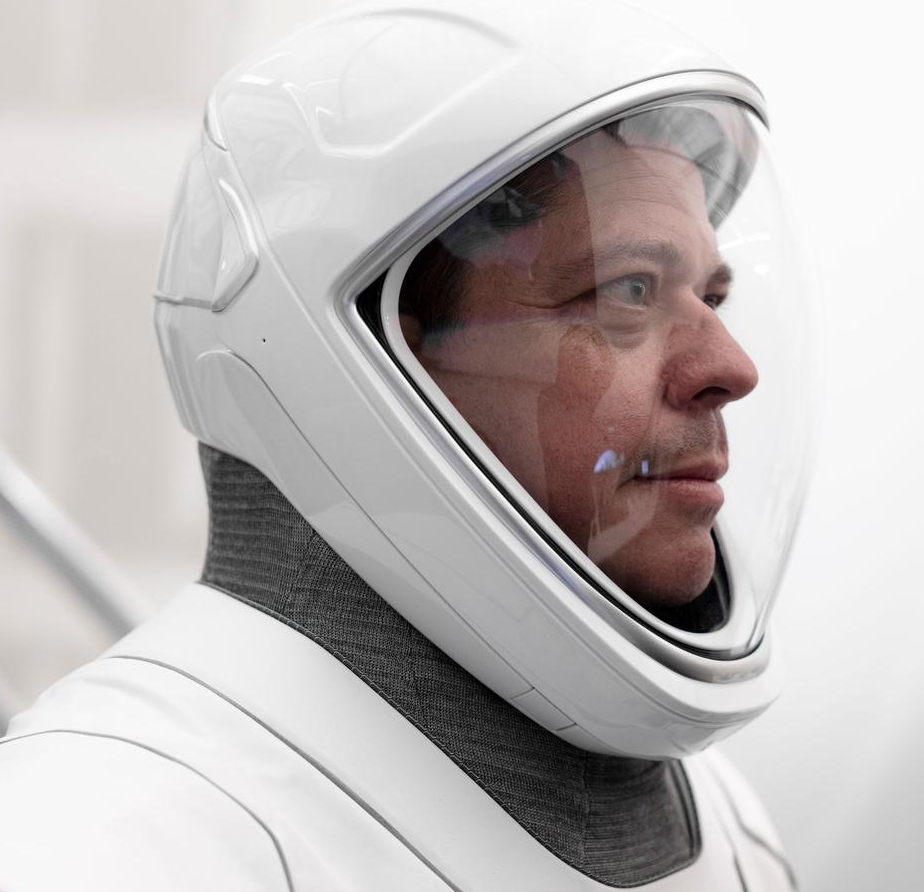 Colonel Behnken is a veteran of two Space Shuttle missions and has spent over 29 days in orbit and conducted six spacewalks.  His first flight, STS-123 in March 2008, was a 15 day mission that delivered the first component of the Japan Kibo laboratory and the Canadian robotics, Dextre, unit to the Station.

His second Shuttle assignment was as one of four crewmembers on STS-400.  Thankfully, this mission never flew as it was the contingency rescue flight in place for the crew of Atlantis, STS-125, on a Hubble Space Telescope servicing mission.

Behnken would fly again on Endeavour on STS-130 in February 2010. During this 13 day mission, the crew installed the Tranquility module and Cupola to the International Space Station.

In July 2012, he was named Chief of the Astronaut Office, succeeding Peggy Whitson.  He held this position for three years and was selected as one of four astronauts to support NASA’s Commercial Crew Program.

He was chosen for Demo-2 in August 2018 and will serve as Joint Operations Commander once Dragon docks with the Station, Thursday.

Bob is married to fellow astronaut Megan McArthur, and they have one son together.

Douglas G. Hurley was born on 21 October 1966 in Endicott, New York, and holds a B.S.E. in Civil Engineering from Tulane University.  He is a graduate of the U.S. Navy Pilot Training Program and was a flight and test pilot in the U.S. Marine Corps, logging over 5,500 hours in more than 25 aircrafts.

Hurley was selected by NASA as a pilot in July 2000 and joined the astronaut candidate class, The Buggs, along with Bob Behnken.  He was the lead for the Astronaut Support Personnel at KSC and supported the tragic mission of STS-107 and one of its Return To Flight missions, STS-121. 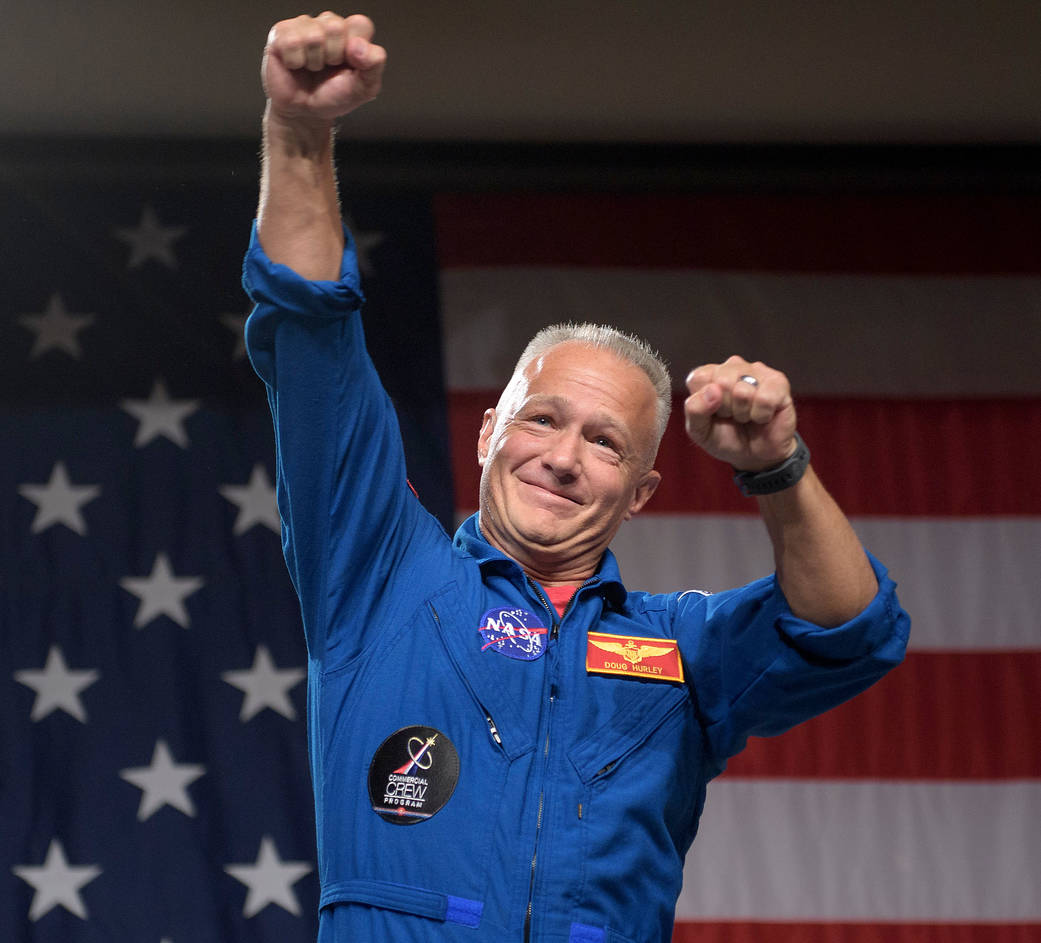 He was also a member of the Columbia Reconstruction Team.

In addition to his work at KSC, he served abroad as NASA Director of Operations at the Gagarin Cosmonaut Training Center in Star City Russia.

Hurley is a veteran of two Space Shuttle missions and has spent over 28 days on orbit.

His first mission was STS-127 aboard the Shuttle Endeavour in July 2009.  This mission included delivery of the Japanese Experiment Module and made history when it docked to the International Space Station, forming a joined spacecraft with the most crew members ever, 13.

Hurley would fly again as a pilot two years later in July 2011 on the final flight of the Space Shuttle.  STS-135 was a 12 day mission that delivered supplies to the Station inside the Multi-Purpose Logistics Module Raffaello.

After completion of the Shuttle Program, he served as Assistant Director, New Programs for the Flight Crew Operations Directorate at the Johnson Space Center and by August 2014 became the Assistant Director for the Commercial Crew Program.

Thank you @SpaceX for the unique privilege of seeing #CrewDragon on the pad w/ @astro_doug. For us, a silver lining to this pandemic is the special time we’ve had together as a family prior to launch, only because of our extended quarantine. Photo: Sam FriedmanSpaceX pic.twitter.com/cQqfdPYIty

A year later, Hurley was selected along with Bob Behnken, Sunita Williams, and Eric Boe as an astronaut for the Commercial Crew Program.  He was later assigned to SpaceX’s Demo-2 mission in August 2018.

He will serve as Dragon’s Commander on Demo-2.

Doug Hurley is married to NASA Astronaut Karen Nyberg.  They have one child.