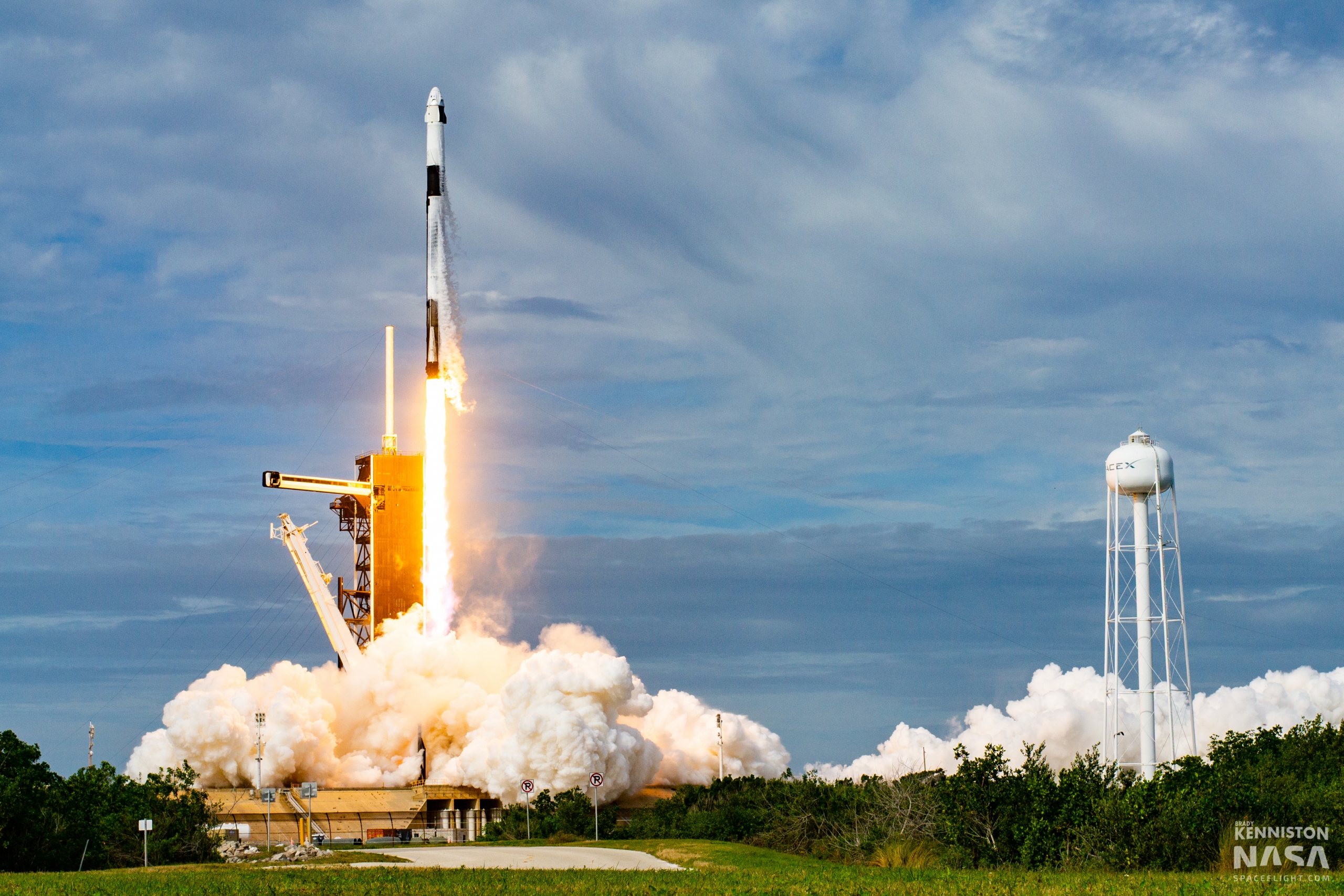 A sentence I have waited almost nine years to write: A flight crew is en route to the Kennedy Space Center, Florida, for launch to the International Space Station.  Bob Behnken and Doug Hurley are expected to land at the Florida spaceport at 16:00 EDT (20:00 UTC) today; their arrival marks the start of the final week of launch preparations.

Activities include final familiarization of Bob and Doug and the SpaceX team with the launch day countdown, a static fire of the Falcon 9 rocket, a series of Flight and Launch Readiness Reviews, and a historic liftoff planned for Wednesday, 27 May at 16:33:31 EDT (20:33:31 UTC) from launch pad 39A.

The first major visual milestone in the week leading up to the historic Demo-2 launch signifies the culmination of years of hard work and dedication from a powerhouse space company that was nowhere near the household name they are now when the last U.S. crew launch occurred on 8 July 2011.

That final Shuttle mission ferried supplies and equipment to the International Space Station and was piloted by none other than Doug Hurley, who will now Command the Demo-2 mission.

When the United States voluntarily gave up its ability to send people into space nine years ago, a small version of the Falcon 9 had only launched twice and there had only been one test flight of the cargo Dragon — and not even a flight to the Station yet.

Back then, SpaceX was a company with bold ambitions and a lot to prove.

Today, they are the arguable leader of U.S. launch and rocketry operations, with Falcon 9 currently at 84 missions to its name and tied with Atlas V for most-flown currently active U.S. rocket.

The Demo-2 crew’s arrival a full week before launch differs from the timeline used for the Shuttle program, when crews would normally arrive four days before liftoff and the day before countdown operations began.

While this part includes the planned uncrewed static fire of the Falcon 9 of the Crew Dragon vehicle on LC-39A later this week, it also represents the final time the Demo-2 crew and SpaceX launch teams have to perform dry run practice sessions at the launch pad with the actual launch vehicle.

As Falcon 9 rolls out just a few days before launch, the normal Terminal Countdown Demonstration Test — where crews conduct a dry run, do-everything-but-load-fuel-into-the rocket, day-of-launch simulation — cannot occur until the final week before liftoff, necessitating an earlier arrival for the crew.

Overall, this will be the Dragon v2’s fourth flight, following the Pad Abort Test in 2015, the highly successful uncrewed Demo-1 week-long orbital flight to the International Space Station in May 2019, and the In-Flight Abort test in January 2020. 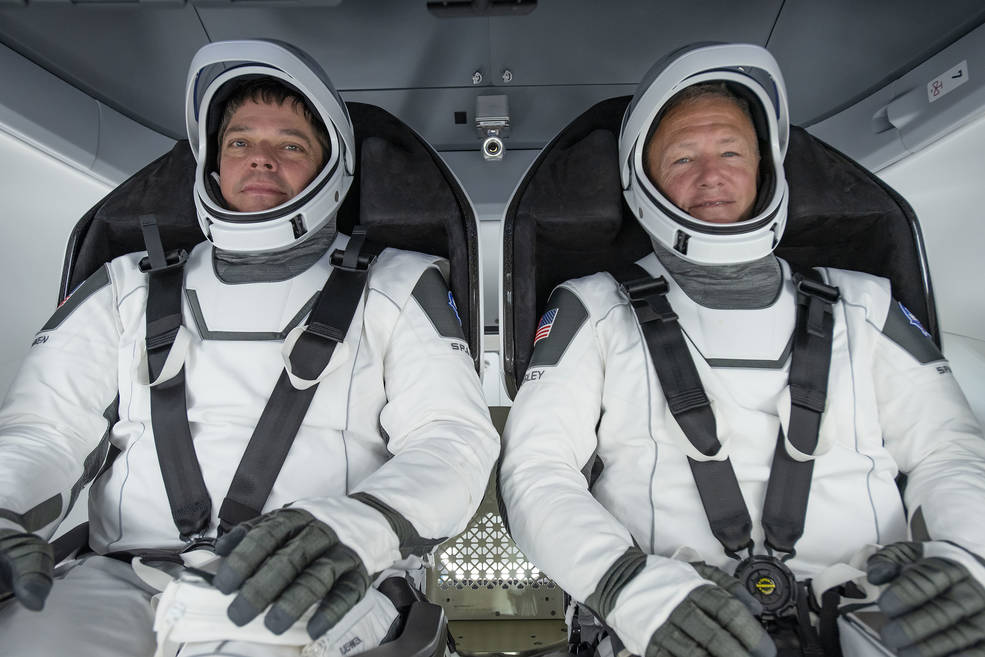 The FRR will provide final clearance from the International Space Station program to proceed to launch and will mark the second-to-last joint-clearance review from NASA and SpaceX to send the mission toward its planned launch date on Wednesday, 27 May.

SpaceX’s own internal reviews have already cleared Falcon 9 and Dragon to proceed to static fire, and pending data review, launch.

The crew will then take part in a Virtual Demo-2 event with media via teleconference on Friday, 22 May.

Monday the 25th will mark L-2 days (Launch -2 days) and the traditional Launch Readiness Review, the final technical review by NASA, SpaceX, and the Commercial Crew Program of the Falcon 9 rocket and Dragon spacecraft.

The Launch Readiness Review will provide authorization to proceed to launch day.

During the crew’s week at Kennedy, they will remain primarily in crew quarters at the Operations and Checkout building located in the industrial area of the Kennedy Space Center.

It is the same location where Apollo and Space Shuttle crews stayed and lived in the days leading up to their launches to the Moon and Low Earth Orbit.

The crew will also have access to the NASA astronaut beach house located close to SLC-41, the Atlas V launch pad on the Cape Canaveral Air Force side of the Florida Spaceport.

On launch day, Bob and Doug will be woken up, given breakfast, and allowed to shower one last time before leaving the planet.

After this, they will suit up in their SpaceX-designed pressure suits and perform leak checks to verify everything is functioning perfectly before walking out to their waiting Tesla Model X for the approximate 20 to 30 minute drive to the launch pad. 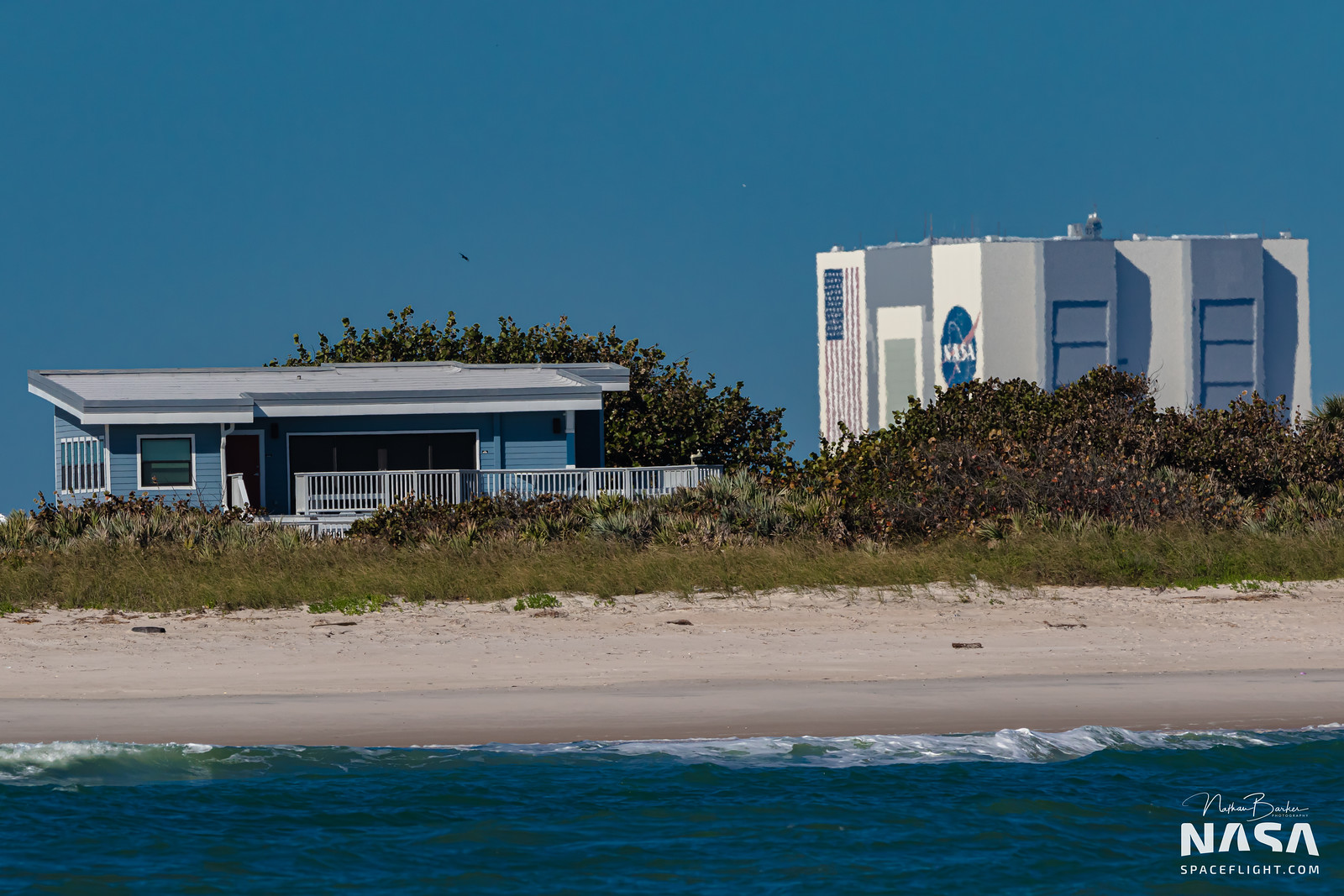 The astronaut beach house, with the VAB watching over. (Credit: Nathan Barker for NSF/L2)

This will mark the first time space travellers are taken in an electric vehicle to a waiting rocket for launch into space.

Once at the base of the pad, Bob and Doug will have the opportunity to take one final look at their Falcon 9 rocket and Crew Dragon spaceship which will ferry them to the International Space Station.

They will then board the elevator and ascend the Fixed Service Structure at LC-39A to the 265 foot added level of the tower, where they will walk across the Crew Access Arm and enter Dragon for a multi-month mission to the Station.

The crew access level was moved up from the Shuttle-era 195 foot level of the tower.  While SpaceX built a new Crew Access Arm for Dragon, they are utilizing the same slide wire basket emergency escape system and hardware that was used for Shuttle, having also raised it up to the 265 foot level.

If there are no technical issues and weather is acceptable at the Kennedy Space Center and within enough of the 50 predetermined abort zones in the Atlantic Ocean stretching up the east coast of the United States, off the Canadian Maritime Provinces, and across to just off the western coast of Ireland, the final “GO” will be given to proceed with fueling and launch.

If all goes according to plan, Falcon 9 will lift off from complex 39A at the Kennedy Space Center at 16:33:31 EDT (20:33:31 UTC) on Wednesday, 27 May 2020, ending the U.S. human launch drought which lasted nearly nine years — the longest cessation of human launch operations, voluntary or involuntary, for the United States.

The launch will mark the first time a privately built and owned rocket and spaceship will launch humans into orbit, the first crewed flight of the Commercial Crew Program, and the first flight to carry humans for SpaceX, the Falcon 9, and Dragon v2.

On May 27, human spaceflight will return to U.S. soil for the first time since 2011.

The mission will fly @AstroBehnken and @Astro_Doug to the @Space_Station onboard the @SpaceX Crew Dragon spacecraft. Learn more about this historic launch: https://t.co/YlvYCPuno8 pic.twitter.com/jS1ElgomoX

If weather or technical issues delay the launch on 27 May, a backup opportunity exists on 30 May.

The days on which launches will be permitted for Demo-2 is more restrictive than it will be for operational crew rotation flights given some of the manual tests objectives Bob and Doug must accomplish inside of Crew Dragon after launch but before reaching the station, necessitating a roughly 19 hour rendezvous profile of Dragon to the Station.

With a successful docking and a nominal flight timeline, this will be the fastest a U.S. crew mission has ever launched and docked with the International Space Station.