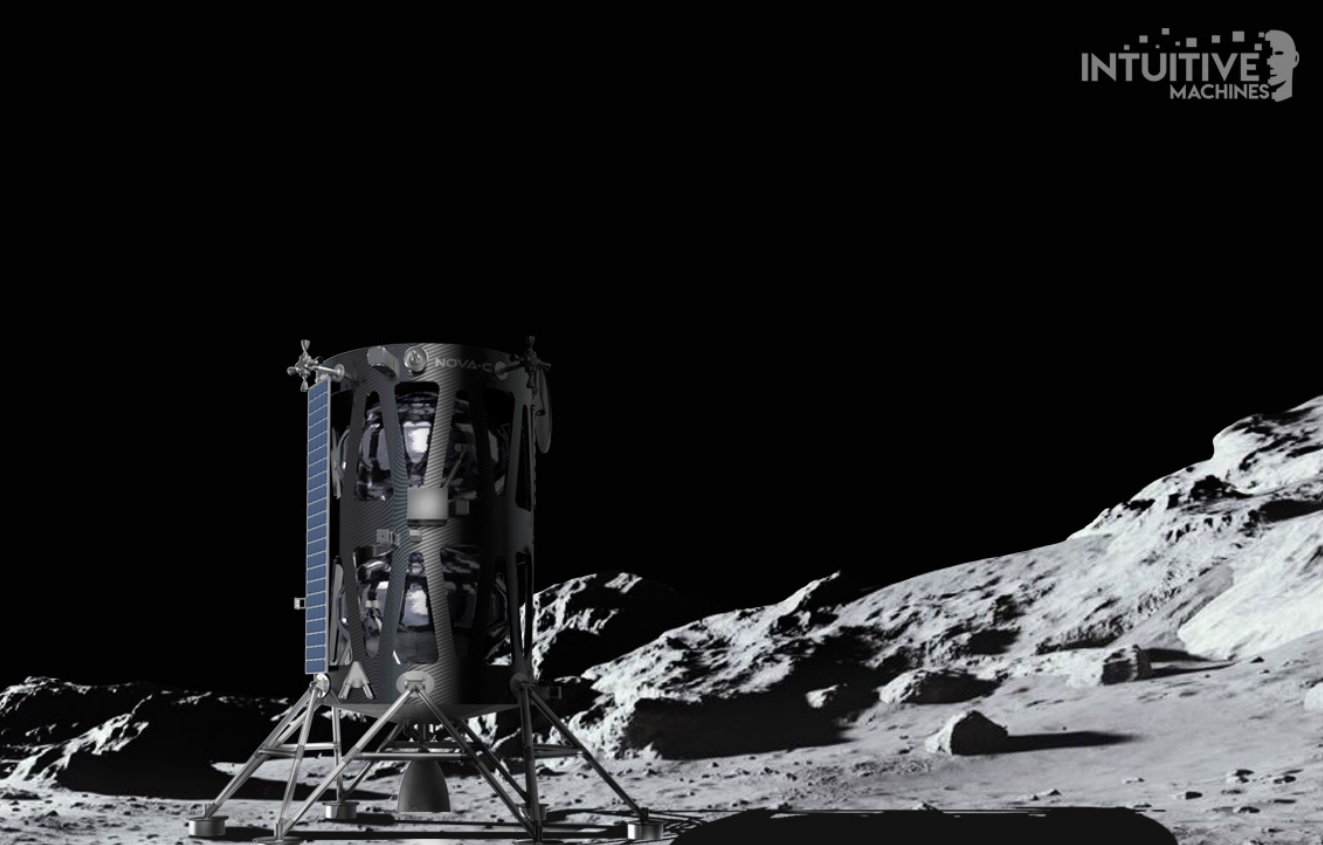 Intuitive Machines (IM) announced the IM-1 mission with the Nova-C lander has selected the Oceanus Procellarum near the Vallis Schrasöteri as a landing site. The Nova-C lander is a lunar lander under NASA’s Commercial Lunar Payload Services (CLPS) program, with the goal of testing technologies to help land astronauts on the lunar surface.

Intuitive Machines selected an area near the Vallis Schrasöteri as a landing site, the largest valley on the Moon and is surrounded by the Oceanus Procellaurum (Ocean of Storms).

NASA considered a site near the Vallis Schrasöteri for the Apollo 18 mission before it was canceled.

Nova-C will land near the site to conduct the surveyance of the area. The area that was selected for landing is flat, free of large raters and rocks, and has abundant sunlight throughout the 14-day lunar “day”. 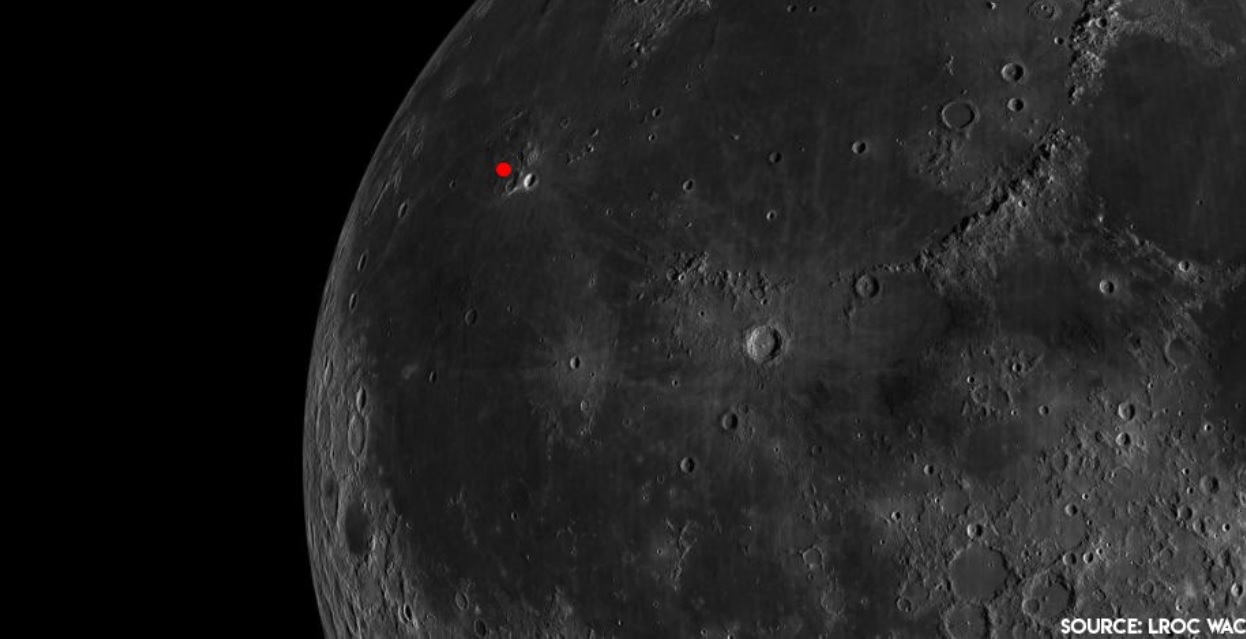 “This kind of lunar landing assessment hasn’t been done since the 1972 Apollo mission,” said IM President and CEO, Steve Altemus. “The tremendous effort our team has put forth to fully characterize our descent approach, landing site options, and lighting conditions to ensure mission success is a paramount task required to fulfill our obligation to our private payload customers and NASA.”

“Our Flight Dynamics team really outdid themselves evaluating trajectories and landing conditions during each launch window,” added IM Vice President of Research and Development, Dr. Tim Crain. “They managed to design this landing site that is supported across our primary and secondary four-day launch windows. No one in Houston has looked as seriously at landing sites for a funded lunar landing mission in almost 50 years.”

The Nova-C lander is a commercially developed lunar lander designed and built by IM. The lander is designed to carry 100 kgs to the surface of the moon, have a 24/7 data coverage, at least 200 watts of power while on the surface, and be modular and adaptive which can allow customers to have a mounting location.

The Nova-C draws heritage from the Morpheus test lander which both use LOX/CH4 and both use an autonomous hazard avoidance and precision landing. 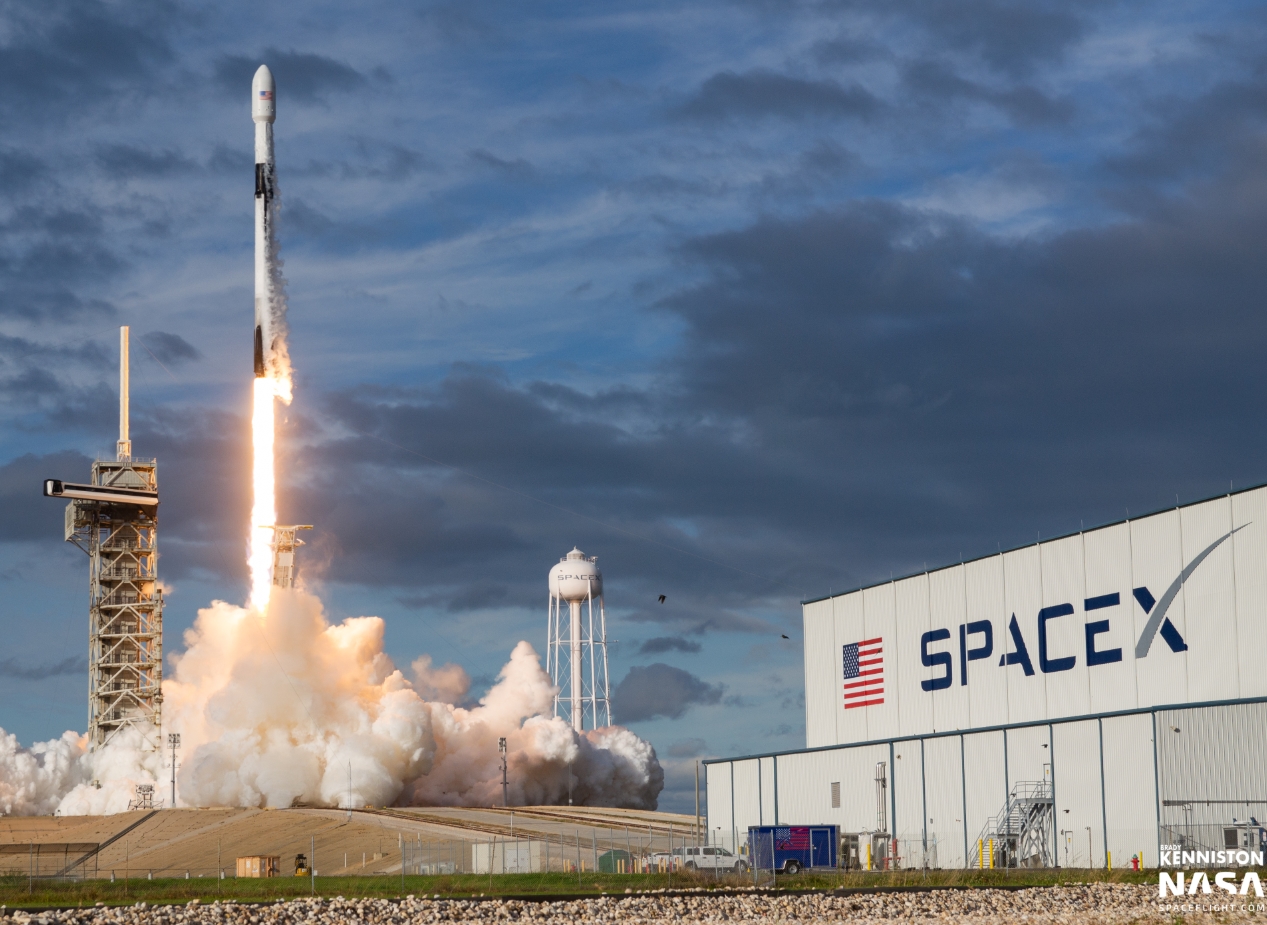 SpaceX Falcon 9 launches Es’Hail-2 from LC-39A, the same rocket and pad that will launch the IM-1 mission – via Brady Kenniston for NSF/L2

The IM-1 mission will test the automated Precision landing and Hazard Avoidance (PLHA) system, which will help pave the way for NASA astronauts to landing on the lunar surface.

The IM-1 will launch on a SpaceX Falcon 9 rocket from historic Launch Pad 39A (LC-39A) at the Kennedy Space Center, with a launch date of October 11th, 2021 with multiple subsequent launch opportunities. This launch epoch can allow for a near-optimal transfer with a six-day transit from the Earth to the Moon. This can allow the 14 days of sunlight at landing site after landing.

NASA and Masten announced Masten won two contracts. The first contract is the CLPS contract with the XL-1 lunar lander to deliver science and technology payloads to the Moon’s south pole in 2022. The second contract is to study the Masten in-Flight Alumina Spray Technique (FAST) Landing Pad, the landing pad can lower the amount of risk to the mission. 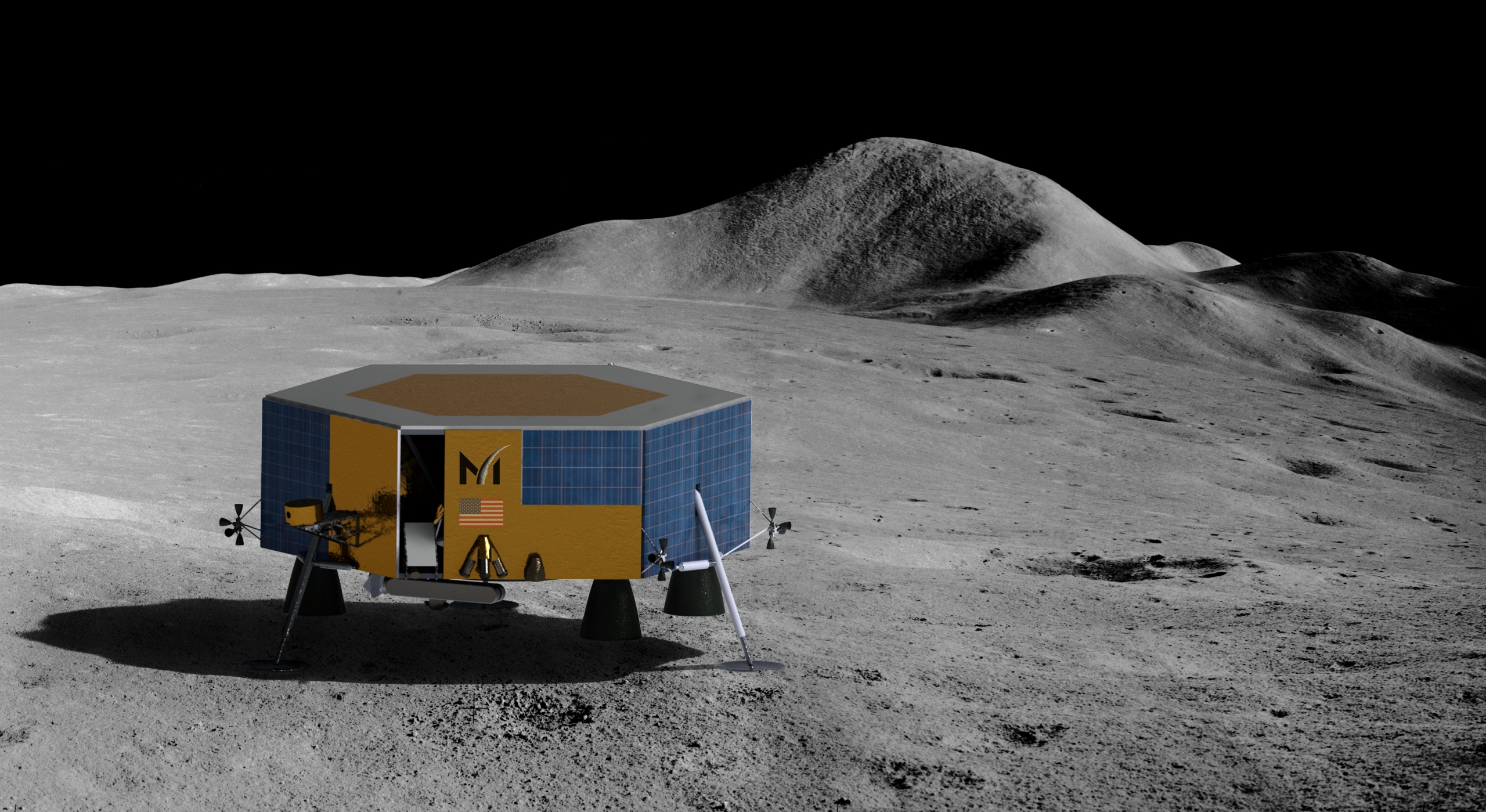 Render of the Masten XL-1 lander – via Masten Space Systems

“The Moon provides great scientific value, and these payloads will advance what we know and help define and improve the science astronauts can do,” said Thomas Zurbuchen, associate administrator of NASA’s Science Mission Directorate (SMD). “Our commercial Moon delivery efforts are seeking to demonstrate how frequent and affordable access to the lunar surface benefits both science and exploration.”

The XL-1 contract awarded 75.9 million to do end-to-end services for delivery of the instruments, payload integrations, launch from a commercial rocket, landing on the surface, and operation for at least 12 days.

“Under our Artemis program, we are going to the Moon with all of America,” said NASA Administrator Jim Bridenstine. “Commercial industry is critical to making our vision for lunar exploration a reality. The science and technology we are sending to the lunar surface ahead of our crewed missions will help us understand the lunar environment better than we ever have before.

“These CLPS deliveries are on the cutting edge of our work to do great science and support human exploration of the Moon. I’m happy to welcome another of our innovative companies to the group that is ready to start taking our payloads to the Moon as soon as possible.”

The instruments that will be attached to the XL-1 are the Lunar Compact Infrared Imaging System (L-CIRiS) which is a radiometer that will explore the moon’s surface composition, map its surface temperature distribution, and demonstrate the instrument’s feasibility for future lunar resource utilization activities.

Next is the linear Energy Transfer Spectrometer (LETS) a sensor that will measure the radiation environment on the Moon’s surface, and will fly on another CLPS mission in 2021. Heimdall, a flexible camera system that will allow multiple types of cameras and a digital video recorder to model areas of the moon and could be used for potential landing or trafficability hazards.

Moonranger a small robotic rover that will demonstrate communications and mapping technologies. The rover will carry a Neutron Spectrometer System to measure the concentration of hydrogen in the Moon’s regolith. 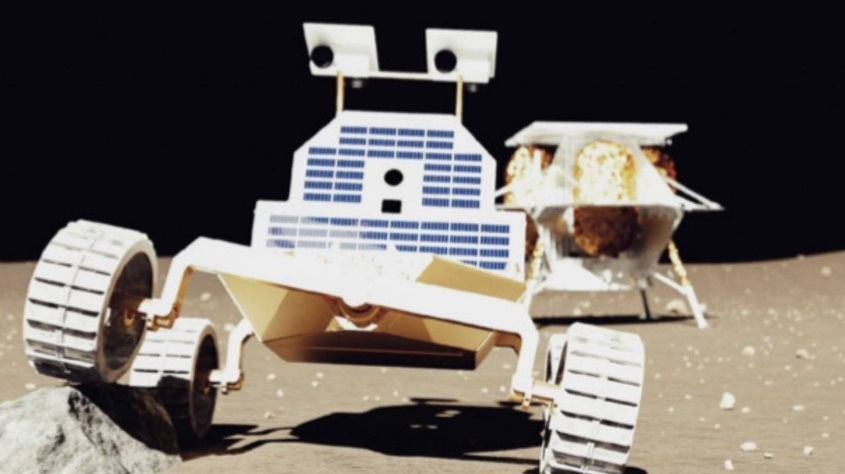 A render of MoonRanger via Astrobotic.

The Mass Spectrometer observing Lunar Operations (MSolo) is a device to measure potentially accessible resources on the Moon’s surface, it will identify gases coming off the lander during touchdown on the surface to help understand what elements coming from the lander and which ones are from the lander itself.

The Near-Infrared Volatile Spectrometer System (NIRVSS) is a tool to measure surface composition and temperature.

The Laser Retroreflector Array (LRA) a series of eight small mirrors to measure the distance and support landing accuracy. And finally, the Sample Acquisition, Morphology Filtering, and Probing of Lunar Regolith (SAMPLR) is a robotic arm that will collect samples of the lunar regolith and demonstrate the use of a robotic scoop.

NASA has contracted with 14 companies to help deliver science and technology to the lunar surface through tasked orders. NASA has plans to issue at least two task orders a year which the companies can propose to take payloads to the Moon.

“I am very pleased to award our next delivery service task order to Masten Space Systems,” said Steven Clarke, deputy associate administrator for exploration in SMD. “With the first delivery in 2022, we are continuing to execute our strategy of providing two delivery opportunities per year of science investigations and technology demonstration payloads to the lunar surface.”

In May of 2019, NASA selected Astrobotic and IM to deliver payloads to the moon in 2021. In February NASA asked 14 companies to provide proposals to flu the Volatiles Investigating Polar Exploration  Rover (VIPER). It will be the first rover on the moon to look and map the distribution of water and other important volatiles at one of the lunar poles. 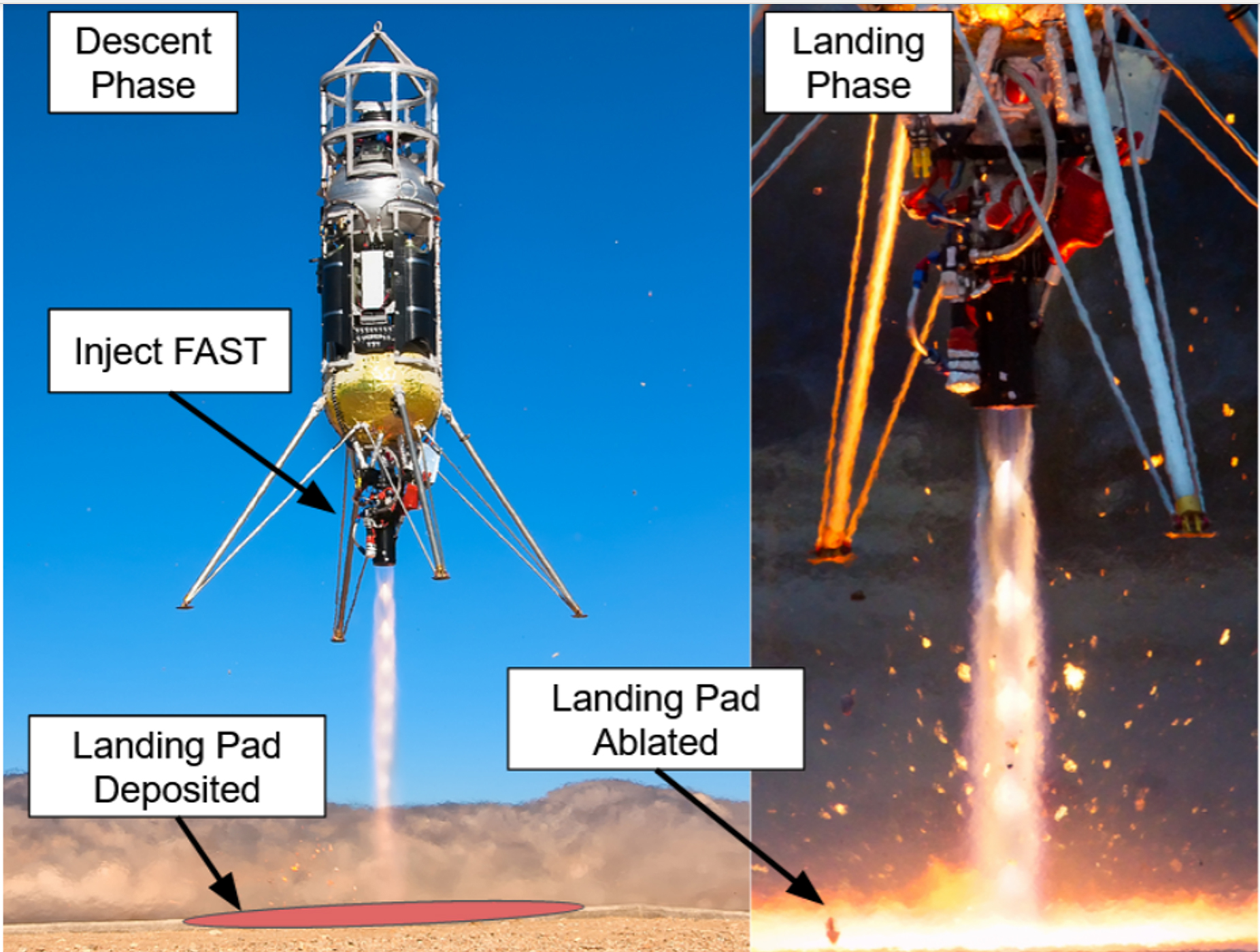 The Artemis lander is a proposed landing mass of 20-60 mT, with its powerful landing system creating a plume that could cause risk from high-velocity ejecta abrasion damaging other landers or creating a crater under the lander as deep as the columnated engine plume.

The FAST would allow small or large landing systems to land at any area of the Moon without any major risks posed by the engine plume.

The CLPS program has five missions already in the works. With two missions in 2021, the Astrobotic mission is on the maiden flight of the United Launch Alliance’s Vulcan rocket with the Peregrine lander. And the second mission is the IM-1 mission.