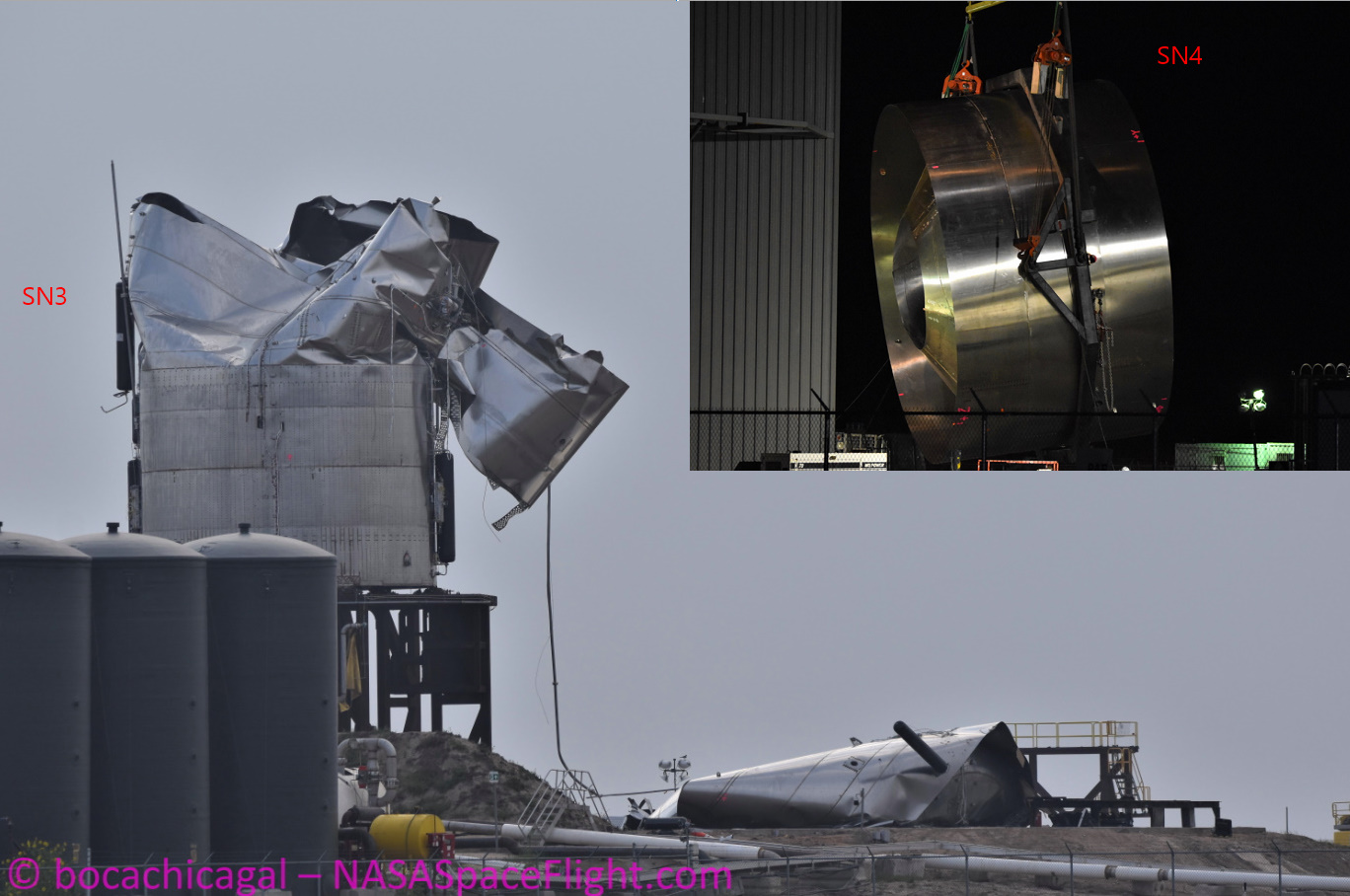 SpaceX Starship SN3, the latest iteration of Starship test vehicles, was lost during testing at the launch site in Boca Chica, Texas. The incident occurred during proof testing on Friday morning. However, Elon Musk has since clarified the issue was the result of incorrect commanding resulting in the loss of pressure, as opposed to any material issue with the Starship build. As a result, SN4 will not require alternations to its structure, with construction work on the next Starship already taking place.

(Lead photos by BocaChicaGal for NSF)

The next round of testing began this week with cryogenic proof testing. These tests saw the vehicle filled with liquid nitrogen at cryogenic temperatures and flight pressures. Proof testing began on Thursday and continued through to Friday morning when SN3 failed during what appeared to be the end of the test.

With Elon Musk noting “we will see what data review says in the morning, but this may have been a test configuration mistake,” on Twitter and the first-look observations, the fault may have been related to detanking or an out of spec pressurization status, rather than another structural failure under pressure.

This was later confirmed in later tweets, with Mr. Musk adding specifics as to the cause of the failure.

“There are redundant pressure control valves. It’s a new system and SN3 was simply commanded wrong. Rockets are hard.”

Prior Starship test vehicles have had their campaigns cut short by failed cryogenic testing, including the last flight vehicle SpaceX rolled to the Boca Chica launch pad, Starship SN1. However, the previous losses were due to the vehicles failing to deal with pressurization testing at a structural level. Had SN3’s testing avoided a commanding issue, it would have likely completed the proof testing without issue.

SpaceX’s first vehicle in Boca Chica, named Starhopper, was the first Starship test vehicle to fly under power from the Raptor rocket engine. A static fire and a tethered hop test was conducted using Raptor SN2 in April 2019. A second static fire, and two free flights to 18 meters and 150 meters in altitude, were completed in July and August 2019 using Raptor SN6.

Starhopper was then retired in favor of Starship Mk1, which was originally intended to advance the Starship flight test program to higher altitudes. However, SpaceX decided not to fly the Mk1 vehicle, and instead focus on an improved design named Mk3. On November 20, 2019, the Mk1 vehicle completed a destructive cryogenic pressure test that destroyed the vehicle.

SpaceX also built individual test tanks to continue improving manufacturing methods. One tank was tested until destruction on January 10, reaching a pressure of 7.1 bar. This was above the 6 bar pressure required for orbital flight.

A second test tank reached 8.5 bar during a destructive test on January 29. This marked the 1.4 safety factor over the 6 bar orbital flight requirement.

The updated Starship Mk3 design was renamed Starship SN1 and rolled to the launch pad to continue the flight test program. But on February 28, the SN1 vehicle was also destroyed during cryogenic testing.

SpaceX fabricated a test tank designated SN2 to complete further testing. On March 8, the tank was tested successfully at cryogenic temperatures and flight pressures, including simulated engine thrust loads. Unlike other test tanks, the test was not to destruction. 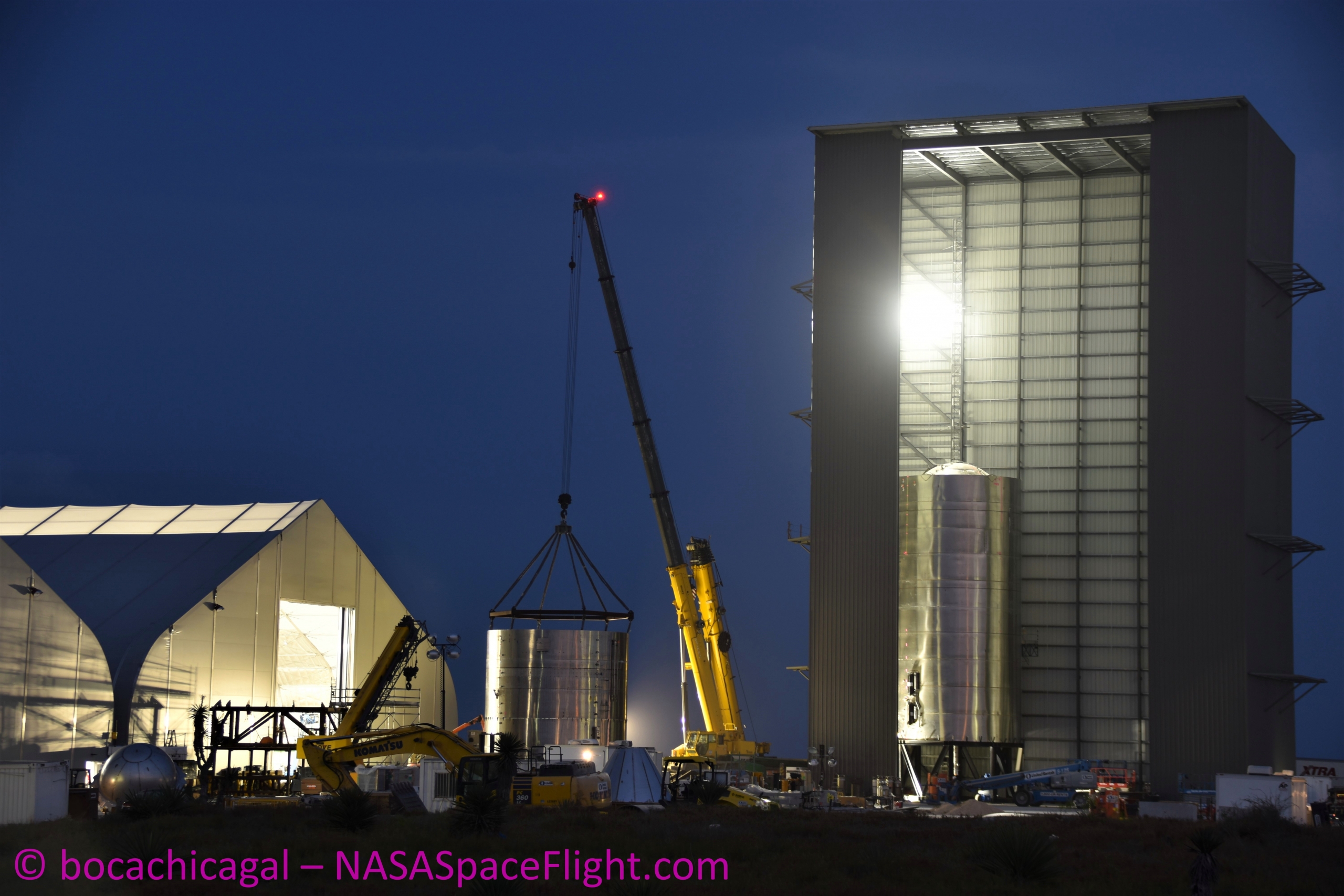 The SN3 vehicle notably featured a new internally mounted, deployable leg design, which is visible in photos shared by SpaceX CEO Elon Musk. Musk noted that the legs will be longer starting with Starship SN4. SN3 does not have a nosecone, nor forward or aft fins. The aerodynamic surfaces are likely unnecessary for the low altitude, low-speed test flights planned for Starship SN3.

Following the completion of cryogenic pressure testing, the vehicle was to be prepared for those test flights. A single Raptor engine was originally planned to be installed on Starship SN3, although it had since changed to using three Raptors that were to be installed the day after a successful cryo test.

These Raptors will now be used on SN4, with Elon Musk posting a photo of the trio on Twitter.

He also added that some of SN3’s hardware, namely the thrust structure that survived the testing incident will be reused.

Should all go well with SN4’s proof testing, the vehicle – consistent with previous test campaigns – would have incrementally moved towards engine firings and flights.

A static fire test of the engine on SN3 was originally expected no sooner than April 1, but the beach closures which indicated this schedule were canceled early Tuesday. Closures originally associated with a 150 meter hop test was scheduled from 9:00 AM to 11:59 PM local time (14:00 to 04:59 UTC) daily from April 6 to April 8. All of those dates were postponed and will be realigned for around one month when SN4 arrives at the launch site.

The static fire and hop test timeline is dependant on successful cryogenic testing, engine installation, and fueling tests. The successful Starhopper campaign utilized a similar approach to that was expected for SN3.

This path will now fall on the shoulders of SN4, which has already begun construction.

Over the weekend, one of SN4’s Bulkheads was flipped, in preparation for following a similar stacking process as SN3. Several steel rings – potentially all for SN4 – were also being transported around the Boca Chica base over the past few days.

One SN4 has arrived at the launch site, the vehicle will undergo proof testing and be fueled for a potential static fire, to allow SpaceX teams will monitor the vehicle’s systems. If the fueling tests are successful, the teams can then continue into a static fire test. If any issues arise during fueling, the teams can take corrective action before another fueling attempt.

Due to the iterative nature of the test campaign, schedule changes and delays are highly likely.

Only after a successful static fire test can Starship SN4 conduct a test flight, expected to be a vertical takeoff, vertical landing flight to 150 meters in altitude. This was the path for SN3 and will likely push SN3’s test campaign to SN4. 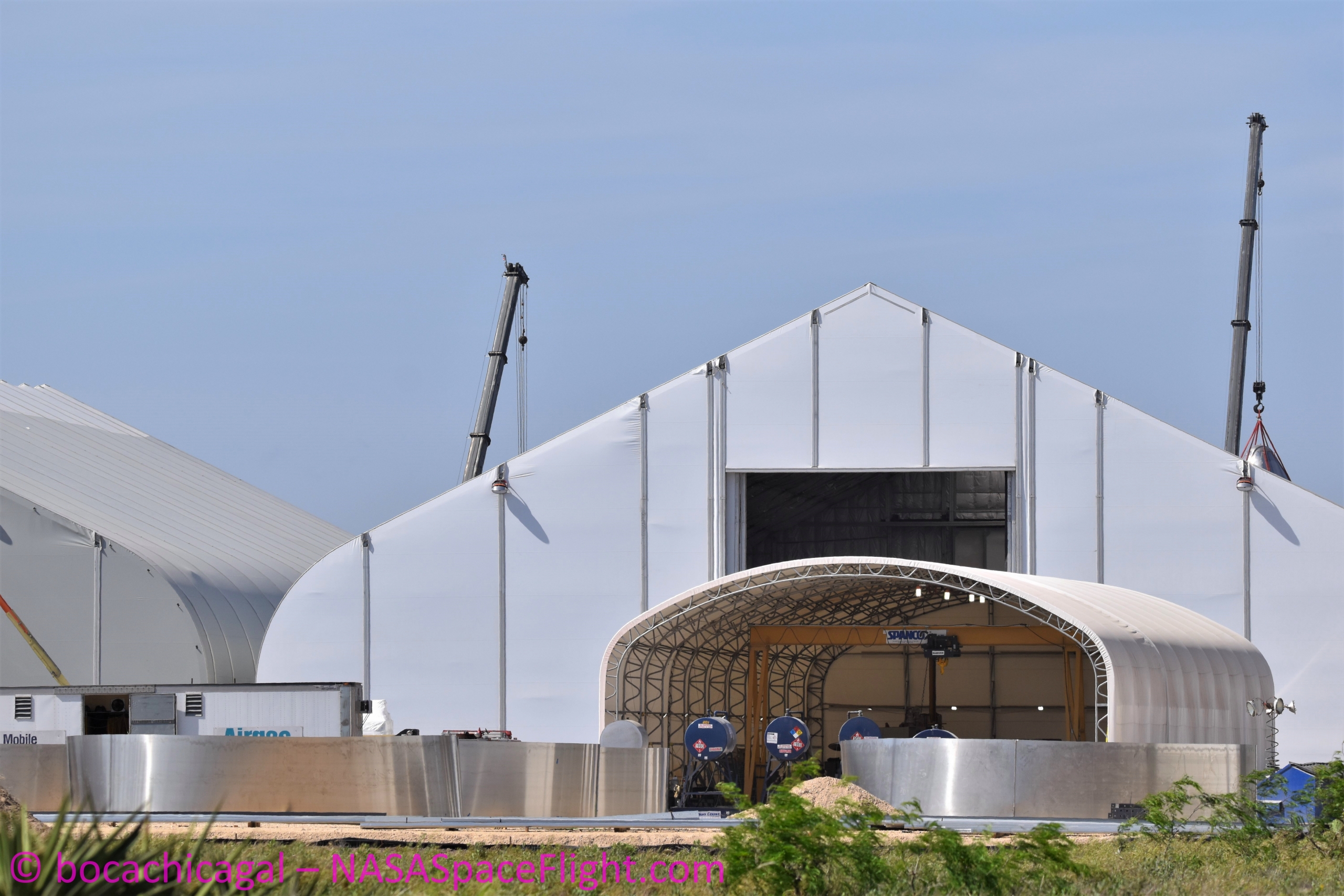 It is likely the path will be refined to involving SN4 with SN3’s test objectives of completing a hop, before SN5 takes on the high altitude flight test.

SpaceX has a goal of an orbital test flight this year. Musk recently noted that he hopes “Starship will have enough flight history to substitute for Dragon for NASA missions,” including the Cargo and Crew Dragon V2 vehicles, and the newly announced Dragon XL cargo spacecraft. The Starship vehicle and associated Super Heavy booster will eventually play a critical role in SpaceX’s overarching Mars colonization goals.