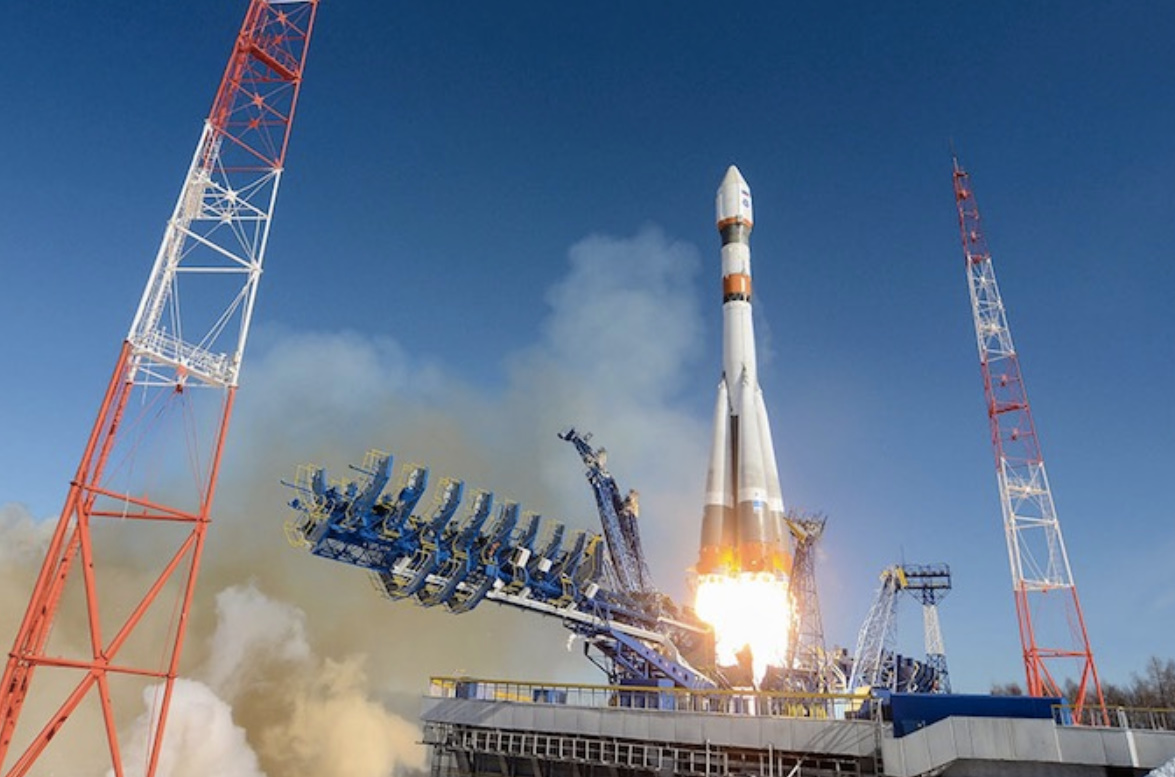 Russia’s Soyuz-2-1a rocket made its first launch of 2020 on Thursday, carrying the ninth Meridian communications satellite into orbit. Having lifted off from the Plesetsk Cosmodrome in northern Russia at 08:24 UTC, Soyuz deployed its Fregat-M upper stage about nine minutes later to carry the satellite to its final elliptical orbit. Spacecraft separation is expected to occur two hours and twenty minutes after launch.

Meridian is a network of satellites that provide the Russian Government with communications for military and installations in the country’s far northern regions. The Meridian constellation forms part of Russia’s Integrated Satellite Communications System, complimenting the geostationary Globus – or Raduga – series of communications satellites.

While geostationary satellites are usually the most convenient way to establish satellite communications between fixed sites, regions close to the Earth’s poles can present challenges to their successful use. At these high latitudes geostationary satellites appear close to the horizon making their use impractical or impossible depending on how far north the receiver is located. Meridian satellites instead use a special class of highly elliptical orbit, known as a Molniya orbit, to ensure the spend most of their time over the northern hemisphere.

The Molniya orbit is named after an earlier series of communications satellites, launched by the Soviet Union and later Russia between 1964 and 2005. These satellites were used for telecommunications and broadcasting, as well as a military role that has now been taken over by Meridian. The name Molniya comes from the Russian word for lightning.

The Meridian-M No.19L satellite, which was carried into orbit by this launch, is the ninth member of the new Meridian constellation. 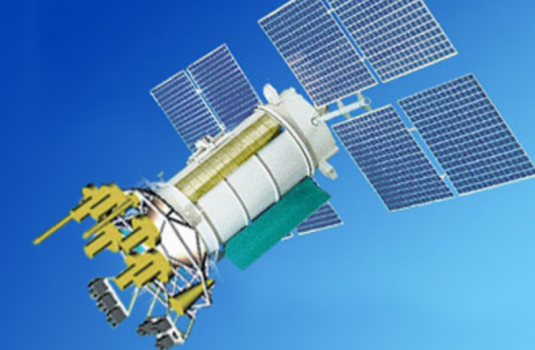 Conceived to replace the military functions of the previous-generation Molniya system, the first Meridian spacecraft was launched in December 2006 by a Soyuz-2-1a/Fregat rocket. That 2006 launch was only the third flight of the Soyuz-2 rocket – now an established workhorse of Russia’s space industry – and its first for the Russian military. Although the satellite, Meridian No.11L, was deployed successfully it malfunctioned in orbit and had ceased operations within two and a half years.

A further six first-generation Meridian satellites were launched between 2009 and 2014 – although the second and fifth spacecraft in the series were lost in launch failures. The second satellite – Meridian No.12L – was deployed into too low an orbit after a malfunction of the Fregat upper stage, while Meridian No.15L was lost in December 2011 when the third stage engine of its Soyuz-2-1b carrier rocket failed.

Meridian-M No.18L was launched last September as the first of four upgraded Meridian-M satellites, ordered in 2016 to replace the spacecraft currently in service as they approach the end of their operational lives. The satellite that launched, Meridian-M No.19L, is the second of these four spacecraft. Of the remaining two satellites, one is expected to launch later this year and the other in 2022.

The Meridian-M spacecraft are similar to the earlier Meridians, incorporating enhancements that have likely been identified from the operation of the earlier satellites. The spacecraft are manufactured by ISS Reshetnev and are based around a pressurized bus incorporating three-axis stabilization. This is believed to have been derived from the Uragan-M navigation satellites which Reshetnev manufactured for Russia’s GLONASS system. Meridian-M No.19L is designed to operate for at least seven years on orbit.

Meridian-M No.19L rode to orbit atop a Soyuz-2-1a rocket with a Fregat-M upper stage. Soyuz-2 is the latest generation of rockets in the legendary Soyuz family, which are descended from Sergei Korolev’s R-7 ballistic missile. Rockets derived from the R-7 include the modified missile that was used to launch the world’s first satellite, Sputnik, in 1957 and the Vostok-K rocket that made Yuri Gagarin the first man in space in 1961.

Soyuz grew out of another R-7-derived rocket, Voskhod, which was developed to launch heavier crewed and military spacecraft. The original Soyuz rocket, designated 11A511, was designed for use with early versions of the larger Soyuz spacecraft then under development, and first flew in November 1966. 1973 saw the introduction of the Soyuz-U, an upgraded Soyuz which was used for crewed, military and civilian launches up until its retirement in 2017. As well as replacing the original Soyuz, Soyuz-U supplanted Voskhod, which was still in service with the Soviet military, and some uses of the smaller Vostok-2M rocket.

The Soyuz-2 upgrade was intended to bring the design into the 21st century, with digital flight control systems replacing systems which were analog on previous versions, and also introducing upgraded engines. The Soyuz-2 made its maiden flight in November 2004, with a suborbital test, before conducting its first orbital launch in October 2006 with the European MetOp-A weather satellite. 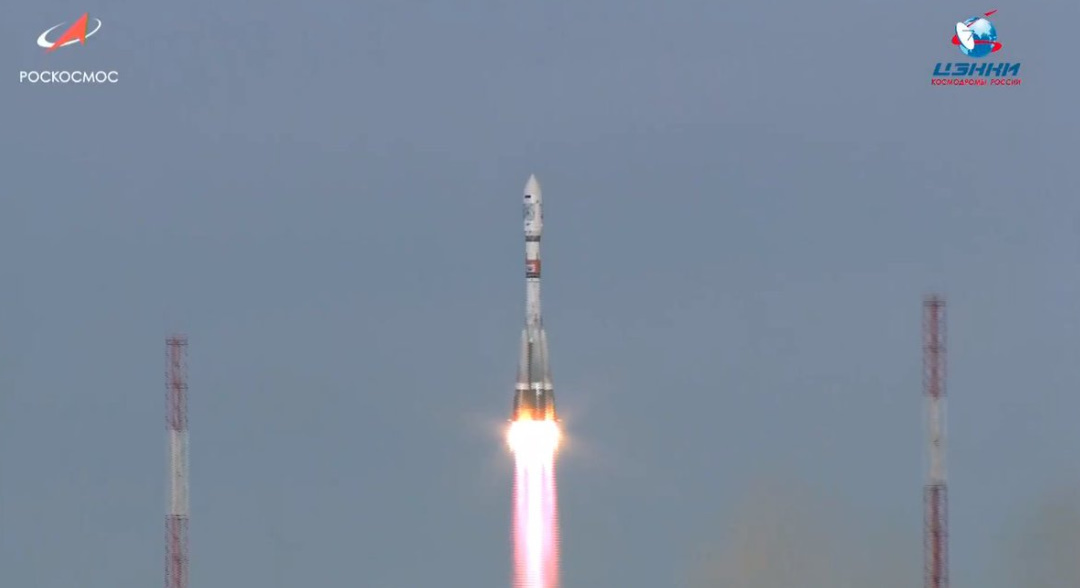 Soyuz 2-1a on a previous launch – via Roscosmos

Three different versions of Soyuz-2 have been developed: Soyuz-2-1a, which was used for this launch, is the standard version. The Soyuz-2-1b configuration incorporates the same upgrades over previous versions of the Soyuz design, but also sports a more powerful RD-0124 engine on its third stage, allowing it to handle heavier payloads. The third version, Soyuz-2-1v, is optimized for smaller payloads and lacks the four boosters that make up the first stage of other Soyuz rockets. Its first and second stages are the second and third stages of the Soyuz-2-1b, although the first stage has also been re-engined with an NK-33 instead of the RD-108A used on the 2-1a and 2-1b.

Soyuz can either be used on its own, or in conjunction with an upper stage, to deliver its payloads to orbit. The Fregat and Volga upper stages have been used to provide access to higher orbits or more precise orbital insertions. Fregat is used most commonly, with the upgraded Fregat-M having now replaced the original Fregat. The Soyuz-2-1b can also use Fregat-MT, a version with additional propellant tanks. Volga is a smaller stage mostly used on the Soyuz-2-1v, although it has also flown on the 2-1a version of the rocket.

All of Meridian’s launches have used Soyuz-2-1a rockets, except for the failed fifth launch which used a Soyuz-2-1b. All nine launches have used Fregat upper stages, with the first two using the original version and subsequent launches using the Fregat-M. All of the launches, including this one, have taken place from the Plesetsk Cosmodrome.

Meridian-M No.19L was launched from Site 43/3 at Plesetsk, a launch pad which was recently reactivated having previously been out of service for seventeen years. This was the second launch from Pad 3 since its return to service, following December’s successful deployment of a Uragan-M satellite for the GLONASS constellation by a Soyuz-2-1b vehicle. This launch marked the first launch of a Soyuz-2-1a rocket from the pad.

Before its return to service last month, the previous launch from Site 43/3 had been a failed Soyuz-U launch in October 2002, which had been intended to place the Foton-M No.1 scientific satellite into orbit. Instead, the rocket began to break apart twenty seconds into its flight, with debris falling back onto the launch pad.

Site 43/3 is one of two active Soyuz launch pads at Plesetsk, alongside the nearby Site 43/4. Soyuz can also launch from Site 31/6 at the Baikonur Cosmodrome in Kazakhstan, Site 1S at the Vostochny Cosmodrome in Eastern Russia and the Ensemble de Lancement Soyouz (ELS) at the Centre Spatial Guyanais in Kourou, French Guiana. Plesetsk is used primarily for military launches, while Roskosmos missions and occasional commercial flights lift off from Baikonur and Vostochny. Kourou is used exclusively for commercial launches contracted by Arianespace.

This launch began with ignition of Soyuz’s first and second stage engines while the rocket was held down at Pad 3. The ignition sequence begins about sixteen seconds before liftoff when the four RD-107A first stage engines and the single RD-108A second stage engine lit up and began to build up thrust. The engines went through their initial, intermediate and full thrust stages before the launch pad’s swing arms opened and Soyuz began her climb away from the Plesetsk Cosmodrome.

The first stage of the Soyuz vehicle consists of four liquid-fuelled strap-on boosters clustered around the core or second stage. Each booster has a single RD-107A engine, while the RD-108A on the core stage uses the same powerplant but incorporates small vernier chambers to help control the rocket’s attitude. All five engines fire together in the early stages of flight. The first and second stages – as well as the third stage – burned RG-1 propellant, a form of rocket-grade kerosene, oxidized by liquid oxygen.

About 118 seconds after lifting off, the first stage separated from the rocket. The four boosters detached from the core and were pushed away by venting residual oxygen through the nose of each booster. After first stage separation, the second stage continued to fire its RD-108A for another 170 seconds. 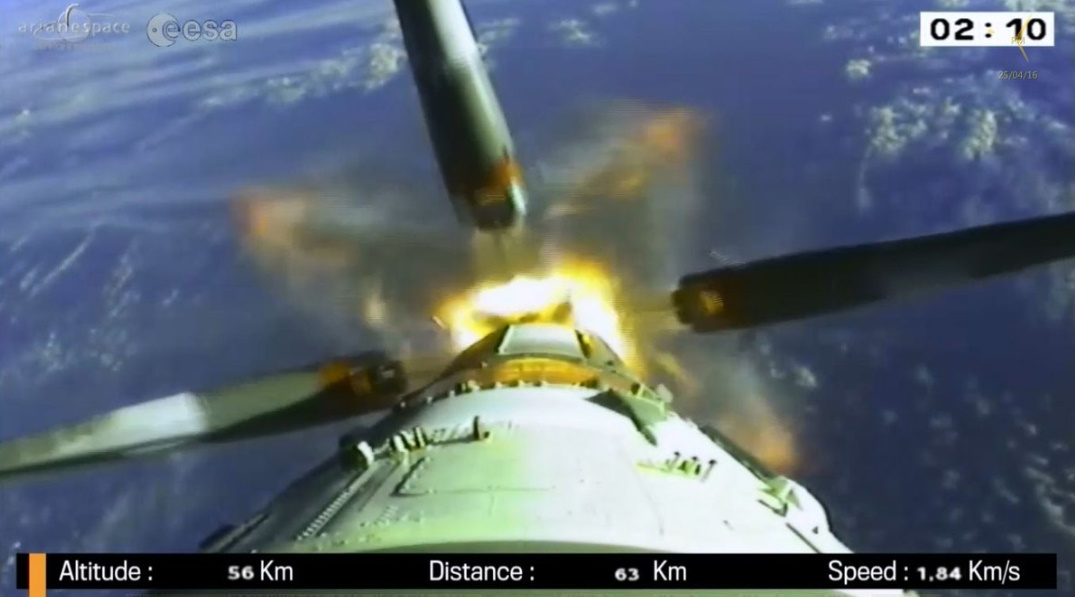 Once the third stage’s RD-0110 engine was up and running, the second stage cut off and separated. Its four-minute burn brought Fregat-M and the Meridian-M satellite close to orbit, with Fregat separating at the end of the burn and beginning its own short burn one minute later to complete insertion into an initial parking orbit.

Fregat – derived from the propulsion systems of two Fobos spacecraft launched in 1998 to explore Mars’ moon Phobos – can shut down and restart its S5.98M engine multiple times to insert satellites into complex orbits. Including the initial insertion burn it will fire three times to place Meridian-M No.19L into its planned Molniya orbit, with a fourth burn planned to deorbit itself after deploying the satellite. Fregat burns storable propellants: unsymmetrical dimethylhydrazine and dinitrogen tetroxide. 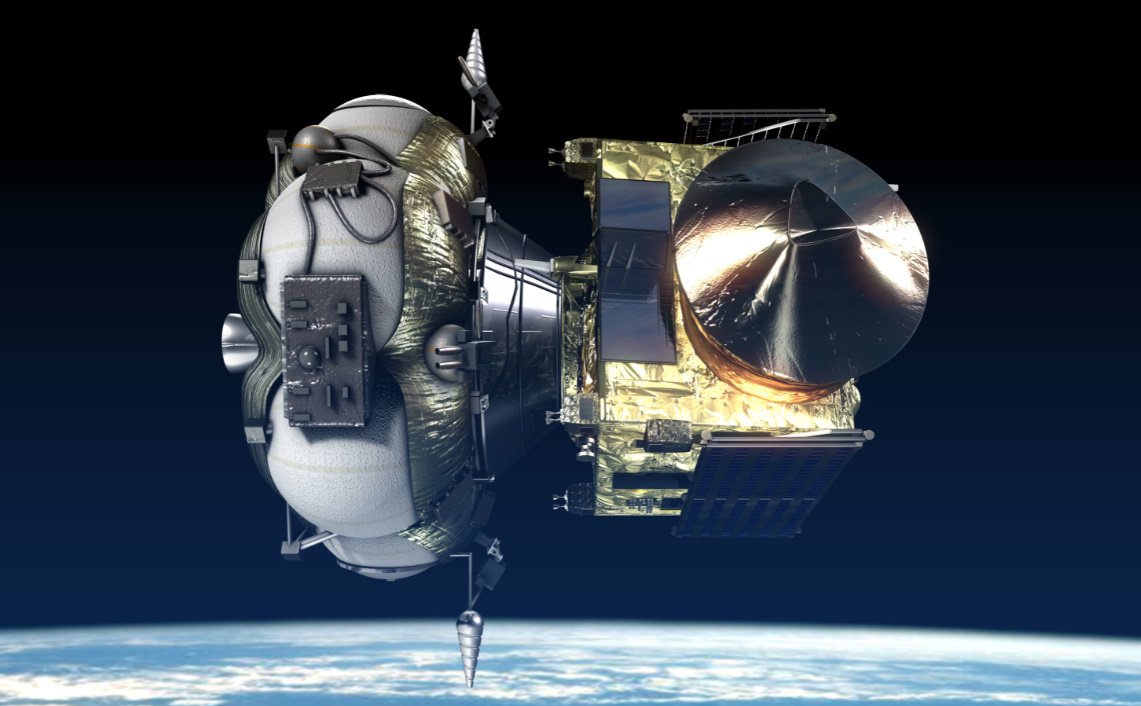 Once in its parking orbit, Fregat will coast for about 36 minutes before making a ten-minute burn to raise the orbit’s apogee. A shorter third burn will occur about eighty minutes later, raising the perigee. Once this is complete, spacecraft separation will occur, with Fregat’s deorbit taking place about half an hour later.

The Meridian launch marks a slow start to 2020, following a year which saw Russia conduct twenty-five orbital launches, eighteen of which used Soyuz rockets. 2020 is expected to see an increase in launches for Soyuz, with the Russian military planning up to 20 launches from Plesetsk in addition to Roskosmos and commercial flights from the other launch sites.