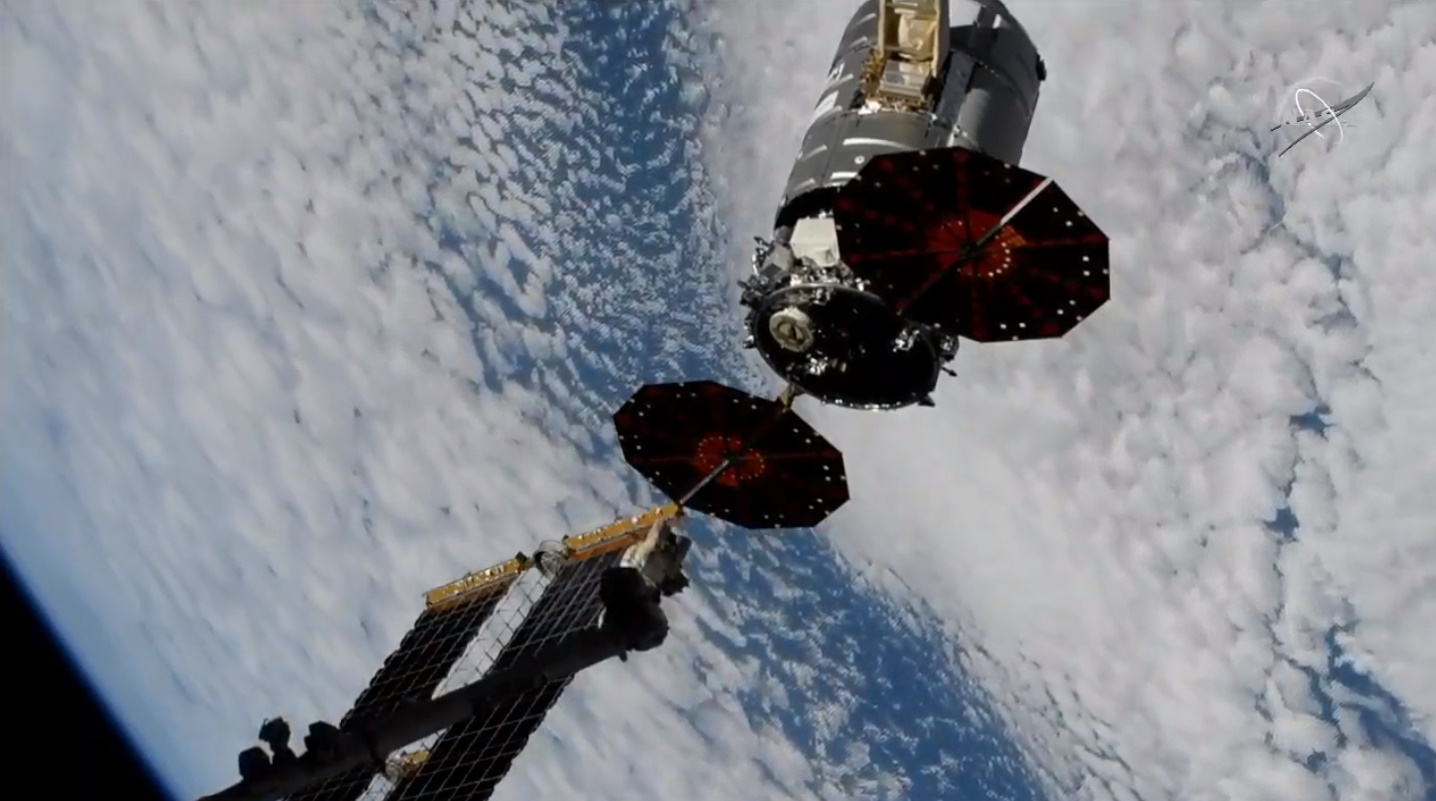 Cygnus had a pre-flight approval to perform two weeks of solo flight operations after leaving the Station before destructively re-entering.  That solo flight operation has now been extended to 31 days in large part due to the planned February launch of the NG-13 Cygnus from the Mid-Atlantic Regional Spaceport in Virginia.

The NG-12 Cygnus was originally scheduled to depart the International Space Station on 13 January, which would have allowed it to perform its two week post-Station mission and re-enter by the end of the month or early February.

That would have placed the end of its mission roughly one week before the launch of the next Cygnus on the NG-13 mission to the International Space Station, which is slated to launch in February 2020.

However, in October, the final two planned battery removal and replacement spacewalks on the Station had to be delayed when an issue with a Battery Charge-Discharge Unit occurred.

Likewise, the final spacewalk in the series to upgrade the Alpha Magnetic Spectrometer was purposely not scheduled to coincide with the initial three repair spacewalk series in December.

Shortly after the start of the New Year, NASA announced the three remaining spacewalks would all take place in January, running from the 15th to the 25th. Those have all now been conducted.

This busy spacewalking schedule, which required a good deal of crew time in addition to all of the scientific and Station maintenance activities the crew are called upon to do, resulted in the decision to push the NG-12 Cygnus’ unberth date from 13 January to 31 January.

That decision was made to ensure the crew had enough time to load all the trash onboard for disposal while also completing the science and EVA priorities on the Station.

This resulted in an interesting conundrum as it now meant the NG-12 Cygnus would be right in the middle of its busy two week post-Station mission while Northrop Grumman would be concentrating on the launch, rendezvous, approach, and berthing of the NG-13 Cygnus.

While simultaneous Cygnus flights are not an issue, as demonstrated late last year when the NG-12 Cygnus launched while the NG-11 Cygnus was performing a multi-month post-Station test flight, the issue this time became one of crew time.

The same Northrop Grumman controllers who would be operating the NG-12 Cygnus would be the same ones operating NG-13.

With the NG-12 launch behind us, preparations are already well underway for @NASA’s NG-13 mission launching early next year. Our #Antares rocket is being prepped and our #Cygnus pressurized cargo module has been delivered to the @NASA_Wallops launch site. #NorthropGrumman pic.twitter.com/EJfYF9eYkF

It was not possible for the NG-12 Cygnus to remain on the International Space Station as it needs to vacate its berthing port to make room for the NG-13 Cygnus.

This led the Johnson Space Center to formally request Northrop Grumman extend the NG-12 Cygnus post-Station mission from 14 days to 31 days to ensure all CubeSat deployments and science initiatives could be supported in-line with ground controller needs.

It also ensured the two Cygnus missions could overlap without a delay to the launch of the NG-13 flight.

The request to extend the mission meant the pre-launch FCC operational permit for a 14-day post-Station mission required amendment.

The FCC formally approved the extension to the NG-12 mission on Monday, 13 January.  It read:

Per a NASA statement on this: “NASA worked with Northrop Grumman to extend NG-12’s stay at station to enable additional items to be loaded onto Cygnus for disposal.

“With the NG-13 launch targeted for February 9, the extended time on orbit for the NG-12 spacecraft enables the Northrop Grumman team to prioritize NG-13 launch and rendezvous before completing the secondary payloads on NG-12.”

Northrop Grumman added that the NG-12 Cygnus will carry out secondary experiments for NASA and the ISS National Laboratory after departing the Station.

This will include the now customary deployment of CubeSats.

Moreover, it demonstrates Cygnus’ continued ability to serve as a free-flying science platform with separate capabilities from that of the International Space Station.

This is a large part of Northrop Grumman’s planned future for Cygnus, offering it as a science station in its own right for customers who wish to put payloads aboard Cygnus but not the International Space Station.

Likewise, it also holds the possibility for the Station crew to load science experiments aboard Cygnus, have the craft depart the Station for a few weeks or months of free flight, and then return to rendezvous and berth again so those experiments can be removed for return to Earth on a reentry craft. 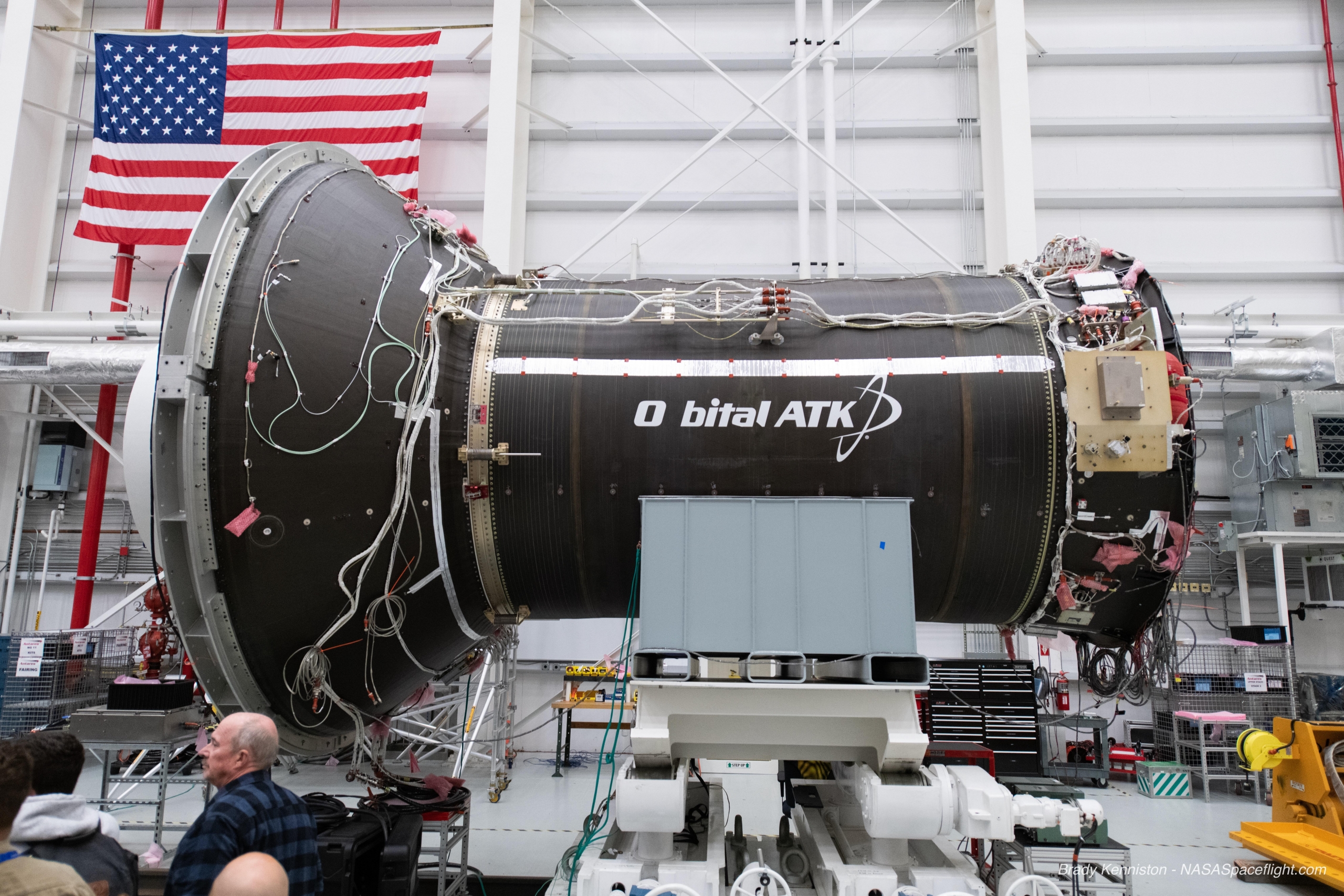 The Castor 30XL solid propellant second stage of the Antares rocket that will take the NG-13 Cygnus to orbit. (Credit: Jacques van Oene)

An advancement on this front that debuted on this NG-12 mission is the ability for scientists to communicate directly to their payloads and receive data directly from them – which was not possible on the first version of Cygnus that flew out the Commercial Resupply Services 1 (CRS1) contract between 2013 and 2019.

Additionally, an unexpected bonus, as noted by Northrop Grumman, is a continuation of testing the company’s ability to operate two Cygnus craft in orbit at the same time.

While this was first achieved in October-December of last year, the company welcomes the opportunity to continue to refine the dual operation capabilities of their team.

For departure, Canadarm2 operators on the ground unberthed the NG-12 Cygnus on 31 January and maneuvered it to its released attitude.  The Station’s US crew took over arm control operations and release Cygnus at 09:35 EST (14:35 UTC) that same day.

NG-12 then departed the Station and deploy CubeSats for SEOPS.

The NG-13 Cygnus will then launch from the Mid-Atlantic Regional Spaceport, Virginia, NET (No Earlier Than) 9 February at 17:39 EST (22:39 UTC) and arrive at the Station two days later on 11 February, where it will be grappled by Canadarm2 and berthed to the same location just vacated by NG-12.

Once NG-13 is secured to the Station, attention will turn back to NG-12 for science operations.

Based on the FCC permit, NG-12 will perform a destructive reentry on 2 March 2020.