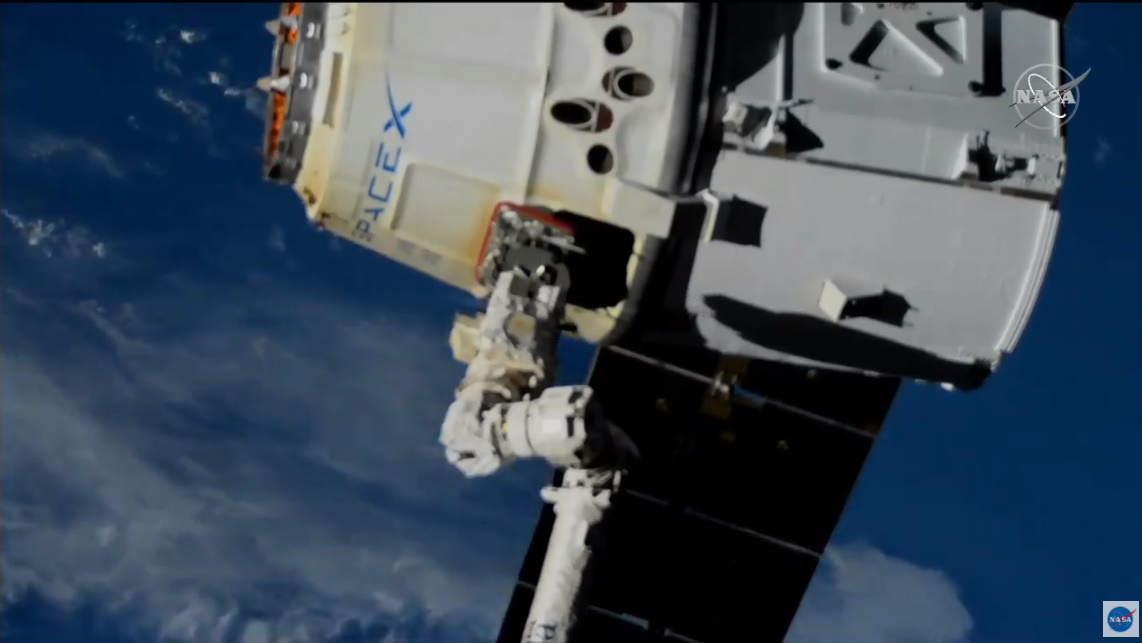 SpaceX’s CRS-19 Dragon spacecraft is now into her EOM (End Of Mission) milestones, following unberthing from the International Space Station (ISS) on Tuesday. Dragon’s release from the Space Station Remote Manipulator System (SSRMS) occurred at 10:05 UTC, with splashdown expected in the Pacific Ocean around 15:20 UTC.

This mission began with Dragon’s ride on Falcon 9 B1059.1 – the first newly-built Falcon 9 booster to fly since June’s Falcon Heavy launch and the first to be used on a single-core Falcon 9 mission since the CRS-17 launch.

Lifting off from SLC-40, the booster successfully returned to land on Of Course I Still Love You while the second stage successfully deployed Dragon enroute to the orbital outpost.

Scientific payloads account for 977 kilograms (2,154 lb) of the pressurized cargo aboard Dragon.

Robotic ground controllers used the robotic arm to detach Dragon from the Earth-facing port of the Harmony module to maneuver Dragon into the release position.

Dragon was unberthed by the Space Station Remote Manipulator System (SSRMS) before being released from the robotic arm at 10:05 UTC.

Once the LEE snares were released, the SSRMS was backed away from Dragon as the craft held its position at the 10-meter mark.

Once the Station’s arm was cleared to a safe distance, Dragon conducted a series of three small thruster firing departure burns that moves the capsule down the R-Bar (Radial Vector) and away from the International Space Station toward Earth (when viewed in relation to ISS orientation and Dragon movements with respect to Earth).

One of the thruster firings, Departure Burn 2, was noted as impacting on the still-attached Cygnus spacecraft’s arrays. This will be investigated, as “plume impingement” is something the ISS team always aim to avoid with arriving and departing vehicles.

ISS takes plume impingement pretty seriously. The camera view is showing some flakes of debris in the camera view (the other static dots are due to a faulty camera). pic.twitter.com/CPxPuebl2y

During the initial stage of departure, Dragon is under the control of its own computer programming, with the Station crew and controllers at Mission Control Houston in Texas for NASA having primary control over the spacecraft.

As Dragon pushed down the R-Bar, the largest of the three thruster departure burns will impart enough Delta Velocity (Delta-V) change to Dragon to push it outside of the approach ellipsoid.

The approach ellipsoid is a 4 km by 2 km oval-shaped region around the International Space Station that extends 2 km in front of and 2 kilometers behind the ISS along the velocity vector (V-Bar) and 1 km above and 1 km below the Station along the R-Bar.

Once Dragon is clear of the approach ellipsoid 1 km below the ISS, primary control of the vehicle shifts from NASA to SpaceX controllers in Hawthorne, California.

Dragon conducts several hours of free flight activities as controllers at Mission Control SpaceX prepared the vehicle for the end of its mission.

This includes the closure of the Guidance Navigation and Control (GNC) bay door on Dragon, creating a perfect thermal protection seal around the entirety of Dragon for entry.

SpaceX flight controllers at Hawthorne, California command Dragon’s Draco thrusters to fire for 12 minutes and 53 seconds – retrograde – in the deorbit burn. This enables Dragon to slip out of orbit for its descent back to Earth.

Following the deorbit burn, the umbilicals between Dragon and her external payload trunk will be severed ahead of the trunk’s separation from Dragon itself.

Dragon then places its heat shield out in front in preparation for Entry Interface (EI) – the moment Dragon reaches the first traces of Earth’s upper atmosphere.

Once EI occurs, Dragon’s Thermal Protection System (TPS) protects it from the searing hot temperatures of reentry formed as the air molecules around Dragon are instantly heated and turned to plasma under the friction created by Dragon’s high velocity.

Dragon’s primary heat shield, called PICA-X, is based on a proprietary variant of NASA’s Phenolic Impregnated Carbon Ablator (PICA) material and is designed to protect Dragon during atmospheric re-entry.

PICA-X is robust enough to protect Dragon not only during ISS return missions but also during high-velocity returns from Lunar and Martian destinations. There were also signs of some experimental tiles on recent Dragons that are understood to be related to SpaceX’s Starship test program.

Unlike the Dragon capsule, the Dragon trunk destructively burns up in Earth’s atmosphere.

Once safely through the plasma stage of reentry, Dragon’s drogue parachutes deploy, followed by the main chutes designed to ease the vehicle to a splashdown in the Pacific Ocean for recovery.

Fast recovery vessels deploy, collecting Dragon’s parachutes as the recovery of the capsule itself is conducted by the primary recovery assets.

It will take about two days for Dragon to be brought back to the Port of Los Angeles for its cache of cargo and scientific experiments to be unloaded.

The ISS crew spent the majority of the second half of Dragon’s stay loading Dragon’s pressurized capsule with key items to be returned to Earth, including numerous time-sensitive experiments, which will be the first items to be removed.

Dragon will eventually take a road trip to SpaceX’s test center at McGregor in Texas for the complete cargo removal.