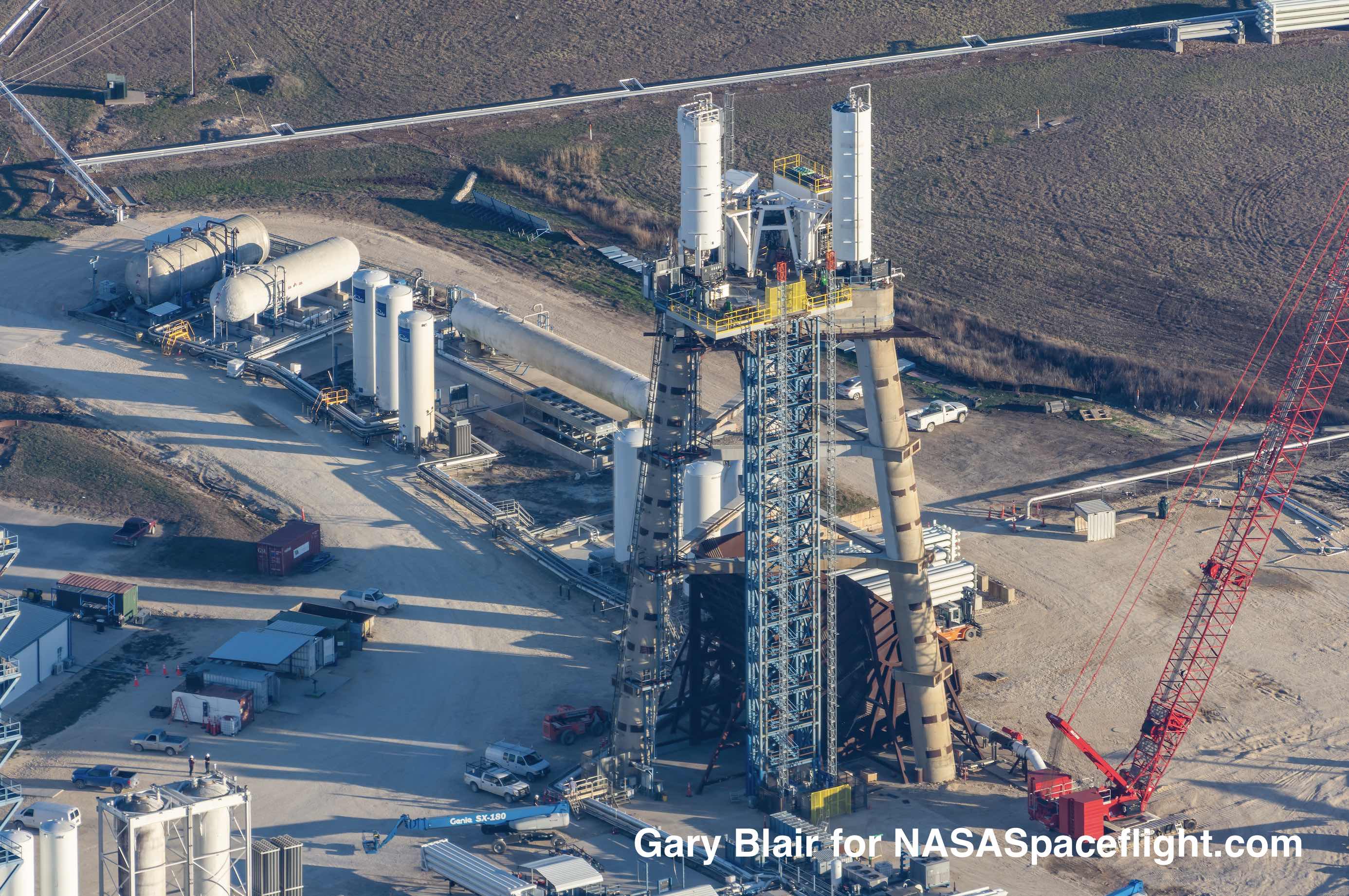 SpaceX’s McGregor test facility is about to open two new test stands to accommodate increased Raptor engine production and a busy Falcon 9 manifest in 2020. Recent aerial images of the McGregor Texas-based facility show that both of the test stands are nearly ready for activation – with the first firings expected to occur this month.

(The lead photo by NSF’s Gary Blair – a local pilot who takes periodical photos when flying near the area for NSF’s L2 McGregor Updates – shows a Raptor engine on the recently modified tripod stand.)

The first test stand about to come online is the iconic tripod stand. NASASpaceflight.com reported in October that renovations were underway to modify the tripod which had been sitting idle for the past few years. SpaceX CEO Elon Musk then confirmed in a tweet that the stand was being converted to support vertical Raptor engine firings.

Raptor is a methane fueled engine which SpaceX is developing for its Starship and Super Heavy launch vehicles.

SpaceX has been using two horizontal Raptor test bays to support the engine testing at McGregor thus far. However, the Raptors are not orientated horizontally when the rocket launches. Additionally, “pump shaft wear and drainage” is better in the vertical configuration, according to Musk. Therefore, to increase Raptor performance and conduct tests that more accurately resemble flight, SpaceX is adding a vertical test stand.

The vertical stand also increases capacity for test firings at McGregor. With the Raptor production rate ramping up, it has been getting difficult for the existing test bays to keep up with the high demand.

Converting the tripod stand was chosen as the fastest route to an additional Raptor test facility in a vertical configuration. Construction was well underway by mid-October, 2019.

The tripod stand was built by Beal Aerospace and was used for engine firings from the late-90’s until 2000 when the company shut down.

SpaceX then moved into the McGregor test facility in 2003. In the coming years, the launch provider would modify the tripod stand to support Falcon 9 static fires. The tripod stand was used for this purpose from 2008 through 2015.

However, with Falcon 9 continuing to become more powerful, SpaceX opted to build a new test stand for Falcon 9 static fires. A new Falcon 9 facility – located directly adjacent to the tripod stand – was activated in late-2015.

The tripod stand then sat idle until construction began to convert it into a Raptor test facility earlier this fall. 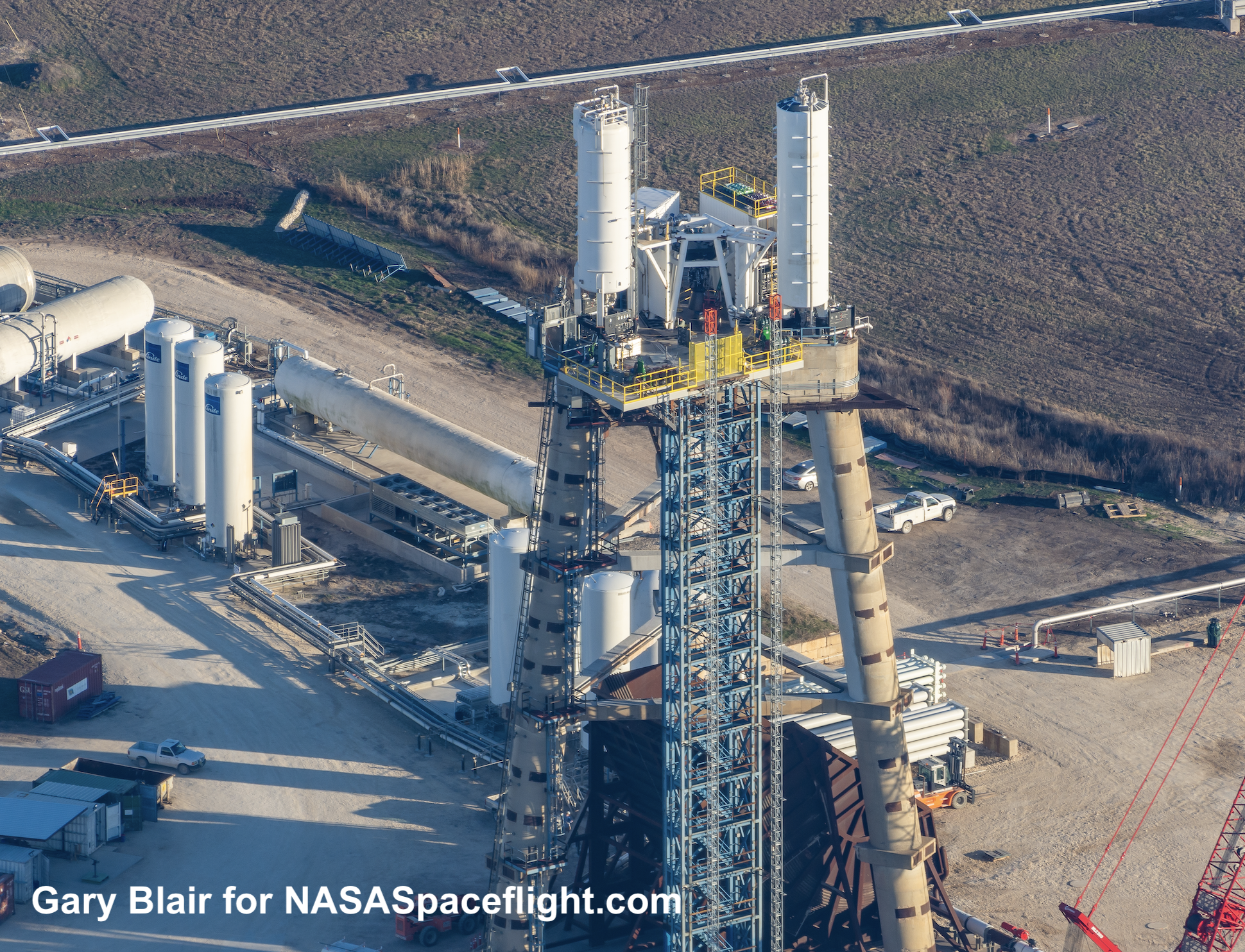 The SN15 Raptor engine can be seen on top of the tripod stand. Credit: Gary Blair for NSF L2

Just two months later, the remodel of the tripod stand is complete. New photos show Raptor SN15 on the tripod ahead of the first-ever Raptor firing on the stand.

It is understood that the firing was set to occur just days after the photos were taken earlier this week, but it is not currently known if the firing has occurred.

Meanwhile, a new second stage stand, which has been under construction on and off for several years now, is also nearly ready for activation.

Work on the new stage two stand has slowed several times due to other priorities at McGregor, including the recent modifications to the tripod stand. 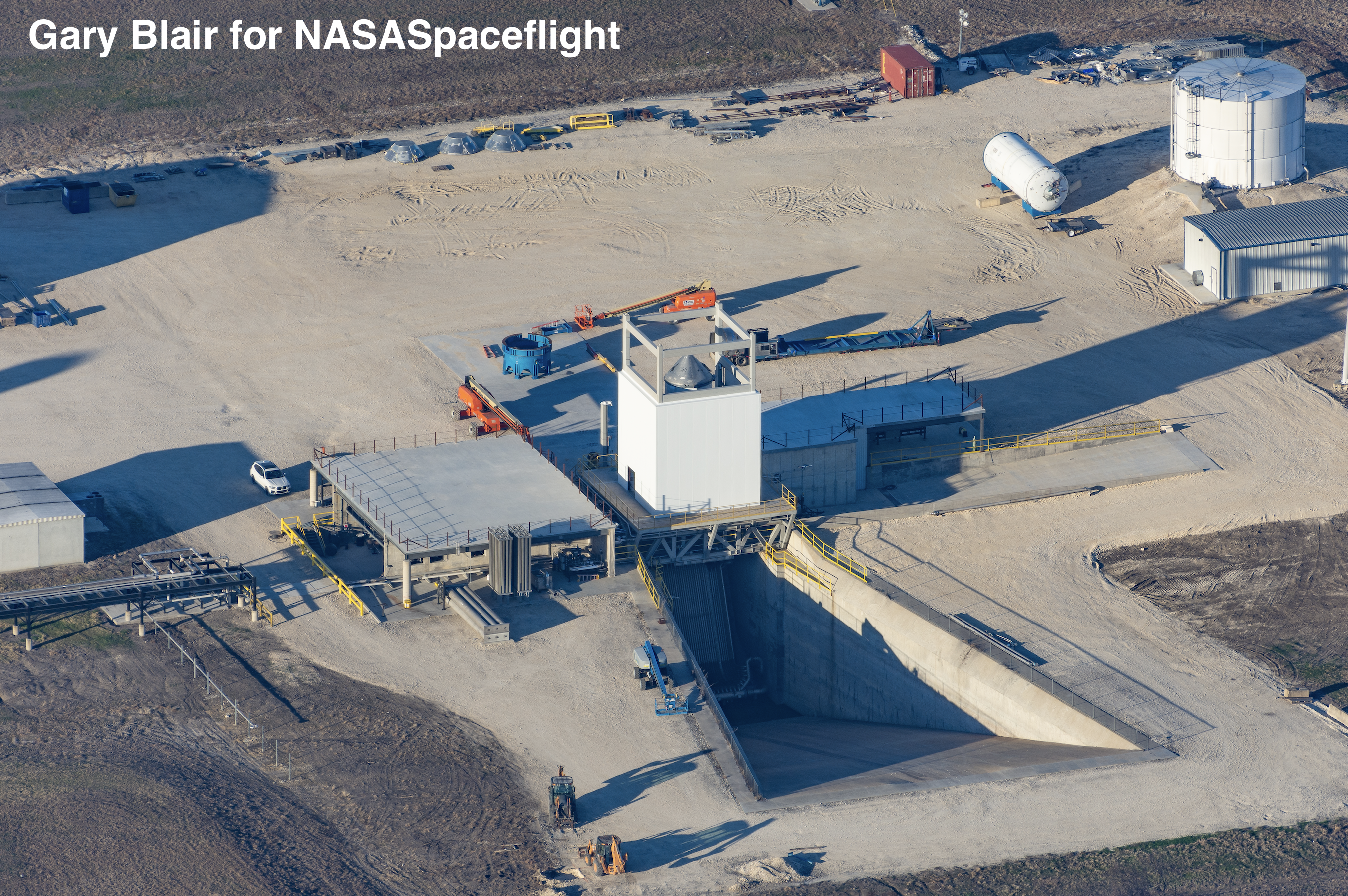 However, the latest aerial imagery shows a Falcon second stage on the stand for the first time. It is understood that SpaceX is preparing to perform the first firing at the new facility later this month.

It has not been confirmed if the current stage on the stand is a test article or a piece of flight hardware.

The new stage two stand is located a good distance from the other key test stands at McGregor, meaning that SpaceX will be able to operate the new testing facility without disturbing the other operations at McGregor.

This is especially important for 2020, with SpaceX expected to quickly ramp up the number of launches for their Starlink internet constellation. The 2020 launch rate for Starlink alone is expected to be up to a launch every two to three weeks, and this does not include SpaceX’s non-Starlink related launches.

Therefore, stage two production will be in high-gear, with multiple upper stages expected to pass through McGregor each month for qualification testing.

The post SpaceX set to activate additional test stands ahead of busy 2020 appeared first on NASASpaceFlight.com.